Eight Republicans joined with Democrats to pass the resolution by a 55-45 vote.

The measure, authored by Sen. Tim Kaine, D-Va., says Trump must win approval from Congress before engaging in further military action against Iran.

Kaine and other supporters said the resolution was not about Trump or even the presidency, but instead was an important reassertion of congressional power to declare war.

While Trump and other presidents ‘must always have the ability to defend the United States from imminent attack, the executive power to initiate war stops there,” Kaine said. ‘An offensive war requires a congressional debate and vote.”

Two-thirds votes in the House and GOP-run Senate would be needed to override an expected Trump veto.

Vote: The 55-45 decision by the Senate to limit Donald Trump’s war powers is – for the moment – symbolic and if it is taken up by the House would be almost certain to be vetoed 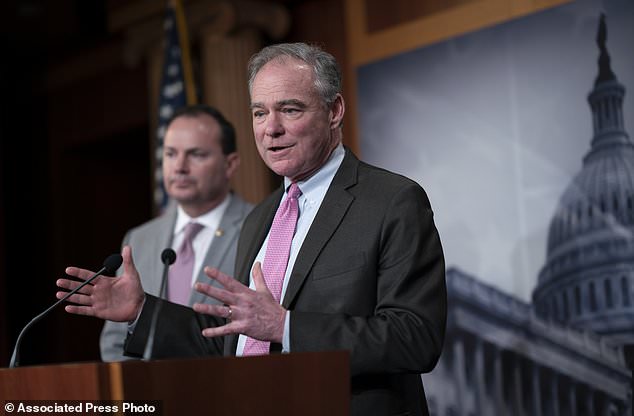 Sen. Tim Kaine joined at left by Sen. Mike Lee, one of the Republican defectors, meets with reporters just after the Senate advanced a resolution asserting that President Trump must seek approval from Congress before engaging in further military action against Iran 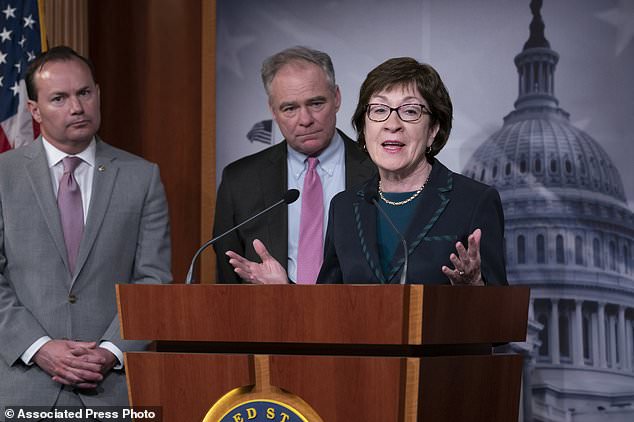 Sen. Susan Collins (right), a Republican from Maine, is a co-sponsor of the resolution that curbs President Trump’s ability to go to war with Iran. She was joined Wednesday at a press conference by Sens. Mike Lee (center), another Republican, and Democrat Tim Kaine (center) 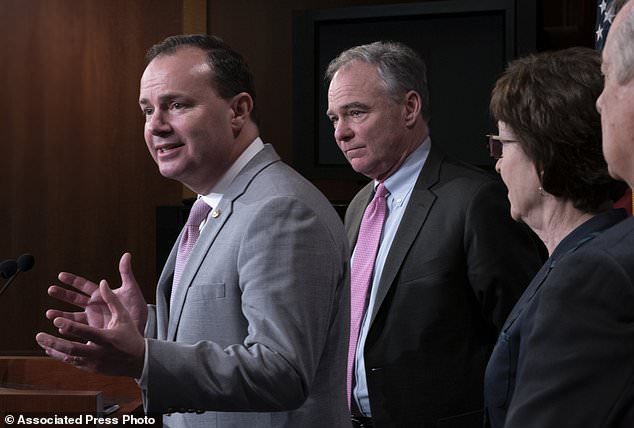 While Sen. Mike Lee (left), a Republican from Utah, agrees with President Trump on foreign policy, he said it was his constitutional duty to reassert Congress’ power to declare war

Kaine and other supporters said the resolution was not about Trump or even the presidency, but instead was an important reassertion of congressional power to declare war.

Answering a claim by some of Trump’s supporters – and Trump himself – that the measure sends a signal of weakness to Iran and other potential adversaries, Kaine said the opposite was true.

‘When we stand up for the rule of law – in a world that hungers for more rule of law – and say ‘this decision is fundamental, and we have rules that we are going to follow so we can make a good decision,’ that’s a message of strength,” Kaine said Wednesday.

Lee supports Trump’s foreign policy – including toward Iran – but said Congress cannot escape its constitutional responsibility to act on matters of war and peace.

‘What the American people and the entire world will see from the debate we’re about to have in the Senate is that there is abundant support for the United States taking tough positions with regard to Iran,’ Lee said Wednesday. ‘And as part of that we want to make sure that any military action that needs to be authorized is in fact properly authorized by Congress. That doesn’t show weakness. That shows strength.’

While Trump and other presidents ‘must always have the ability to defend the United States from imminent attack, the executive power to initiate war stops there,” Kaine said. ‘An offensive war requires a congressional debate and vote.”

The principle of congressional approval is established for an important reason, Kaine said. ‘If we’re to order our young men and women … to risk their lives in war, it should be on the basis of careful deliberation by the people’s elected legislature and not on the say-so of any one person.’ 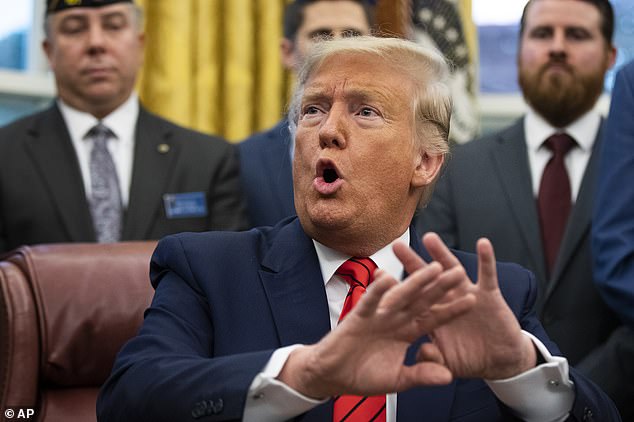 Not happy: Donald Trump had tweeted at Republican senators that they had to vote against limiting his war powers

Trump disputed that, arguing in two tweets Wednesday that a vote against Kaine’s proposal was important to national security and pointed to the Jan. 3 drone strike that killed Iran’s top general, Qassem Soleimani.

‘We are doing very well with Iran and this is not the time to show weakness. Americans overwhelmingly support our attack on terrorist Soleimani,’ Trump said. ‘If my hands were tied, Iran would have a field day. Sends a very bad signal. The Democrats are only doing this as an attempt to embarrass the Republican Party. Don’t let it happen!’

Tehran responded to the U.S. attack on Soleimani by launching missiles at two military bases in Iraq that house American troops. The attack caused traumatic brain injuries in at least 64 U.S. soldiers, the Pentagon said.

Democrats and Republicans alike criticized a briefing by the Trump administration shortly after the drone strike, saying U.S. officials offered vague information about a possible attack being planned by Iran but no substantial details.

At Republicans’ request, he removed initial language that targeted Trump in favor of a generalized statement declaring that Congress has the sole power to declare war.

The resolution also directs Trump to terminate use of military force against Iran or any part of its government without approval from Congress.

Sen. Susan Collins, a Republican from Maine and a co-sponsor, called the resolution ‘much-needed and long overdue,’ adding that over the past decade, ‘Congress has too often abdicated its constitutional responsibility on authorizing the sustained use of military force.”

Senate Majority Leader Mitch McConnell and many other Republicans oppose the resolution, saying it would send the wrong message to U.S. allies.

Two-thirds votes in the House and Senate would be needed to override an expected Trump veto.