A quarter of Britons would consider accessing their pension pot cash earlier than planned amid the cost-of-living crisis, fresh research has revealed.

Drawdowns rose by 24 per cent and sales of annuities increased by 13 per cent to  60,383 in the last year. Uncrystallised funds pension lump sums saw the biggest increase, at 28 per cent.

Be careful: With more people accessing pension money early, pension scams are on the rise

Sadly, however, scammers are preying on people worried about money and whether or not their pension pot will last them for the duration of the retirement.

Seventeen per cent of over 65s in Britain are still in work simply because they cannot afford to retire on their current pension, and over a third are not confident they have enough in their pot to last their whole retirement.

The Financial Conduct Authority has today warned that scammers are using ‘misdirection’ tactics to con victims out of their pension pot cash.

It said: ‘Just as with magic tricks – where magicians use misdirection to divert attention while the trick is carried out – emerging scam tactics are following the same pattern.’

People contemplating accessing their pension pot cash early are particularly at risk of falling victim to scammers in the current climate, the FCA added.

Scammers are distracting victims by preying on money concerns and building up trust.

Worryingly, 44 per cent of just over 1,000 people aged 40 and over surveyed by the FCA said they wouldn’t hesitate to take up the offer of a free pension review. But, the FCA has warned that the offer of such a free review is a ‘classic distraction tactic’ used by criminals who want to get hold of people’s pension money.

The FCA added: ‘Many would also be reassured if a potential scammer getting in touch out of the blue could show them third-party verification – such as a separate individual who can (falsely) vouch for them, (46 per cent) and had positive reviews of their service (31 per cent), despite the fact scammers are becoming increasingly skilled at producing fake websites and brochures [as a distraction] when carrying out their “trick”.’

So, if you receive an out-of-the-blue text, phone call, email or letter in the post offering you something like a free pension review, be careful as it may be a scam.

Then comes the trick…

After successfully distracting their victims, scammers will then prey on their victims’ misunderstanding of how pension savings work to secure their hard-earned money.

Over half of people surveyed told the FCA they were clueless when it came to knowing about how to grow their pension pot, while 38 per cent said they were not confident about how pensions really worked.

Eight pension scam tricks to watch out for

Times are financially hard for many people up and down the UK, and crooks are looking to take advantage of vulnerability.

Watch out for these commonly used tactics of pension scammers and make sure you keep your pension pots safe:

1. The offer of a free pension review. This can be tempting but it could prove to be a scam, and result in you parting with your pension;

2. Higher returns, where crooks will guarantee they can get you better returns on your pension savings;

3. Help to release cash from your pension even though you are under 55. An offer to release funds before age 55 is highly likely to be a scam, and has major tax implications;

4. High-pressure sales tactics, where the scammers may try to pressure you with “time-limited offers” or even send a courier to your door to wait while you sign documents;

5. Unusual investments – which tend to be unregulated and high risk, and may be difficult to sell if you need access to your money;

6. Complicated structures where it isn’t clear where your money will end up’;

7. Arrangements where there are several parties involved, some of which may be based overseas, all taking a fee, which means the total amount deducted from your pension is significant; and

8. Long-term pension investments, which mean it could be several years before you realise something is wrong.

The promise of higher returns is just is one of a number of tricks to watch out for, as is talk of more unusual investments to fund your retirement, like a hotel in the Caribbean, for instance. The premise of a ‘time-limited offer’ is another factor to watch out for.

Pauline Padden, 58, was looking after her terminally ill mother when she received a text message offering her a better deal on her pension and some cash in return for transferring her pot.

Pauline was promised higher returns on her pension savings if she invested in a long-term hotel build in the Caribbean. Six months later, Pauline was devastated to receive a letter explaining she had been the victim of a scam and had lost £45,000 in pension savings.

Ms Padden, said: ‘At the time I was incredibly vulnerable. I was busy looking after my terminally ill mother and my three children. The scammers capitalised on my vulnerability and robbed me of the prospect of ever retiring. I was only trying to make my retirement easier but instead these scammers ruined my life.

‘I still don’t know if I’m ever going to be able to get my savings back and will probably have to keep working until I am no longer fit to do so. I just hope I can help to raise awareness of the signs to look out for so that others never have to go through what I’ve had to deal with over the last nine years.’

Mark Steward, executive director of enforcement and market oversight at the FCA, said: ‘Many of us sit in awe watching magicians make things disappear right in front of our eyes, despite us thinking we can see everything going on.

‘Once the trick ends, there are no consequences and we can enjoy the rest of our night. But that doesn’t happen with pension scams.

‘The rising cost of living is affecting people at all savings levels, and pension scammers are taking advantage of this.

‘Pension scammers are tricking victims with false promises of a better lifestyle in retirement, more money to support a better life in hard times. Like the magician’s trick, thousands can disappear in seconds, but this time the consequences can be devastating ones.’

Head of pensions and savings at Interactive Investor Becky O’Connor said: “Attempts by pension scammers to part people from their life savings are devious and cynical.

‘The FCA’s list of tactics is incredibly useful, but also, highlights how clever the scammers are. The phrase “long term investments” is widely used among legitimate providers, after all. So it’s no wonder people are confused – and unfortunately falling for these tactics.’

Worried about being scammed?

If you are concerned you or someone you know may fall victim to a pension scam, take a look at the ScamSmart website, which contains information which could help you avoid being conned by crooks.

The FCA also has a handy Warning List tool available online, which enables users to select the pension or investment opportunity they are considering or have come across and see if it is likely to be a scam.

So, if you have been offered, for example, a free pension review out of the blue, the tool will warn you and state that this is likely to be a scam. You can also check to see if the firm is on the FCA’s Warning List.

It is important to note that if you deal with an unauthorised firm, you will not be covered by the Financial Ombudsman Service or Financial Services Compensation Scheme if things go wrong.

Why are more people accessing their pension pots?

The data published by the FCA today detailing how Britons are accessing their pension pot cash is pretty startling, and shows how habits are shifting as the cost-of-living crisis deepens.

Andrew Tully, technical director at Canada Life, said: ‘People are withdrawing money from their pensions in far greater numbers than last year, while this could be a reaction to the pandemic when people generally had less opportunity to purchase some of the big ticket items such as holidays and cars. On the other hand, this could be the start of people raiding their pensions to plug a gap in income or help younger relatives on to the property ladder.’

Tom Selby, head of retirement policy at AJ Bell, said: ‘The rise in the number of people accessing their pensions for the first time will inevitably spark fears of savers raiding their retirement pots to make ends meet during the cost-of-living crisis. 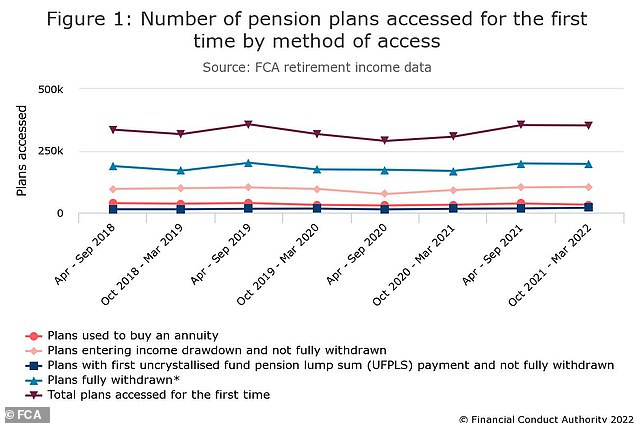 Early access: The number of Britons accessing their pension early is on the up, the FCA said

‘Anyone accessing their pension earlier than planned or taking bigger withdrawals in order to cover higher living costs needs to think carefully about the impact this will have on the sustainability of their retirement income plan.

‘While in some cases savers may feel dipping into their pension is the only option, it’s important to take the time to consider how decisions taken today will impact on your finances further down the line.’

He added: ‘The FCA’s data suggests four in ten regular withdrawals in drawdown were at an annual rate of 8 per cent or more in 2021/22, down slightly from 43 per cent in the previous year.

‘Whether or not this withdrawal rate is concerning will depend on the circumstances of the individual, their health, age and the investment returns they enjoy. For example, someone who has a guaranteed defined benefit pension that covers all their living costs might be perfectly comfortable taking large withdrawals from their SIPP.

‘Equally, someone who is accessing their pension later in life – for example in their mid-70s – should be able to withdraw a higher amount sustainably than someone who starts taking an income from their 60th birthday.

‘The key to making drawdown work is to carefully consider the sustainability of your withdrawal plan, understand and be comfortable with the risks you are taking, and review your strategy regularly, ideally with a regulated adviser.’

If you are considering moving or accessing money from your pension, it may be sensible to pay for professional financial advice with an expert before making any decisions about what to do with your money.