Don’t get lost at Glastonbury! EE’s Glastonbury App lets festivalgoers see which direction they’re moving in and get their bearings across the 900-ACRE site

The moment that festival fans have been waiting for is almost finally here, with Glastonbury Festival finally kicking off in just three weeks.

The enormous site spans 900 acres and welcomes more than 203,000 attendees, meaning it can be very easy to get lost during the festival.

Now, EE has announced the return of its Glastonbury App to help keep festivalgoers on track.

The app features an interactive map that allows you to get your bearings by identifying where you are within the festival’s grounds.

EE has announced the return of its Glastonbury App to help keep festivalgoers on track. The app features an interactive map that allows you to get your bearings by identifying where you are within the festival’s grounds

If you’re single and planning to attend a festival this summer, then Tinder’s latest feature could be just the thing.

Tinder has launched Festival Mode, which helps users find and match with fellow festivalgoers before the event.

‘Music is a universal language and the number-one interest among Tinder members worldwide. So many of our members are excited to jump back into in-person events,’ explained Kyle Miller, VP of Product Innovation at Tinder.

‘We wanted to build on that excitement and offer them a head start at meeting someone new ahead of one of the biggest festival seasons in years.’

The Glastonbury App will be available to download from Monday 6 June, ahead of the start of the festival on 22 June.

‘In its long-standing partnership with Glastonbury, EE has designed this year’s free app for everyone – whether users are heading down to Worthy Farm this June or watching from home, the app is filled with content and features tailored to enhance the users’ festival experience wherever they are watching,’ EE explained in a release.

Within the app, users can curate their own shareable line-ups and view information about artists performing at the festival – including Paul McCartney, Diana Ross, and Billie Eilish.

Attendees can use an interactive map to see which direction they are moving in and get their bearings.

While one of the main concerns for festivalgoers is their smartphone running out of battery, EE has introduced new features to ensure the app doesn’t drain their precious battery.

‘With a newly introduced Dark Mode, music fans can be safe in the knowledge that the app will consume less battery than ever before,’ EE explained.

EE estimates that more than 200 terabytes of data will be used by festivalgoers this year – doubling 2019’s record of 100 terabytes. 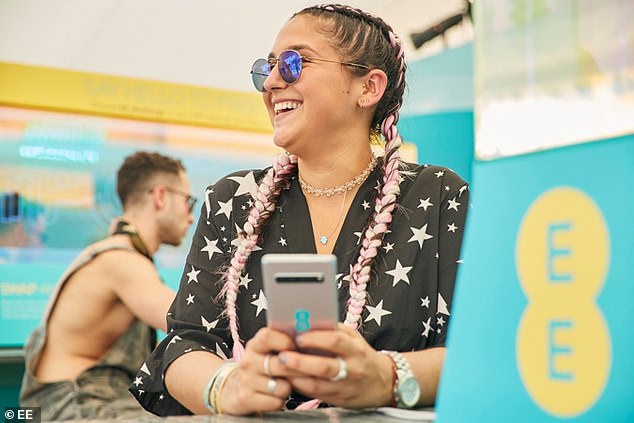 Glastonbury attendees will also have access to EE’s Recharge Tent, where they can charge their smartphones for free

To cope with this increased demand, the tech firm will install seven temporary masts to cover Worthy Farm, along with two already in position.

Attendees will also have access to EE’s Recharge Tent, where they can charge their smartphones for free.

‘Over the years we have worked with the team at Glastonbury to use our technology to improve the experience of festival goers – whether that’s keeping your phone charged, getting in touch with friends at the festival or sharing memories with those that aren’t there,’ said Pete Jeavons, Marketing and Communications Director at EE.

‘With the increasing data demands seen at live events across the country, we are working hard at Worthy Farm to make sure we have a network in place that can cope with these demands.’

The official Glastonbury Festival app will be available to download from June 6 for iOS and Android users.