Having spent much of the winter under attack from all sides – teachers, parents, unions and politicians of every shade, including one or two in his own party – the Education Secretary appears to have a half-term spring in his step.

But then, waiting to meet him today are none of the above. Rather, he has come to inspect a mountain of laptops – many of them donated by readers of the Mail. And they are certainly an uplifting sight.

School closures, reopenings, reclosures, exam fiascos, shortages and constant flip-floppery over testing have reverberated far beyond the school gates as the whole country grasps two immutable truths: a stalled education system is not only damaging the long-term prospects of millions of children but it is also throttling the economy.

And the man routinely blamed for every reverse, whether fairly or not, is Gavin Williamson.

Education Secretary Gavin Williamson MP joins the packing lines at the ‘Computacenter’ HQ in Hatfield, where millions of laptops, including thousands provided by Daily Mail reader donations to the Mail Force ‘Computers for Kids’ appeal are dispatched to children (pictured)

Yet, today, he is in good spirits as he comes to view thousands of laptops which will shortly be on their way to some of Britain’s neediest children – thanks, in part, to the Mail’s great Computers for Kids campaign.

For, as with Covid jabs, so the picture is not too dissimilar in terms of bridging the digital divide between those children with access to online education and those without. Britain, it seems, is setting the pace.

Some of this is down to the kindness of Mail readers whose donations, as Mr Williamson puts it, have made ‘a real legacy for years to come’.

But it is also down to the fact that the Department for Education took the plunge by ordering more than a million machines back when others were hesitating.

‘We’ve been competing against the Japanese and French, scouring the world for laptops,’ he says. ‘We started much earlier. It gave us a real advantage. We’ve seen other nations belatedly wading into the market but we were placing such large volume orders that it meant we weren’t in a panic-buying situation.’

In recent weeks, Mr Williamson, 44, has even found himself in the curious position of being the world’s single biggest purchaser of laptops.

The situation is far from perfect, of course. The teaching unions and others have attacked the Government for ordering too little too late. But as with personal protective equipment (PPE) at the start of this pandemic, followed by vaccines, the world is chasing the same finite amount of kit.

‘I remember when we decided that we were going to order over a million laptops – and this was when rates of Covid-19 were declining quite rapidly,’ he recalls. ‘We weren’t talking about new strains then. We were all rather hopeful. And I always remember taking that decision and thinking: will they be needed?’

Like the Government’s decision to go overboard when ordering vaccines, few would argue with that decision now.

The situation has been further improved, very considerably, by Mail Force’s Computers for Kids programme.

Through the Mail Force charity, set up by this newspaper, it is boosting national capacity significantly by creating entirely new supply lines, including second-hand devices refurbished by our expert IT partners for around £15.

Pledges to the initiative stand at £10.7million in cash and computers, thanks to generous Mail readers, businesses and philanthropists.

‘What the Daily Mail and your readers did which was so incredibly important was you opened up access to different devices that we weren’t going to be procuring,’ he points out.

‘That means that the reach across the UK has been expanded and we will have a real legacy. These computers are going to help children for years, whether they’re doing a bit of extra learning within the school or at home. It’s also helping them access brilliant resources online.’ 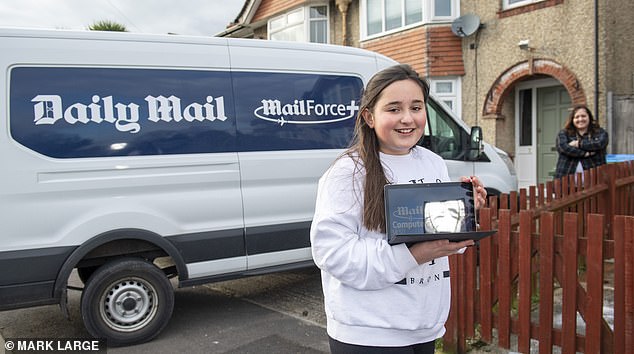 Next week, Mail Force will start ramping up delivery of thousands of new and newly-refurbished computers. So the Education Secretary has come to meet me at the hi-tech Hertfordshire warehouse where they are being prepared for despatch. And he is rather bowled over by the sight of it all.

There are so many laptops stacked up here that you could take one of these forklift trucks and construct a laptop maze. We are in Hatfield at the global headquarters of Computacenter, Mail Force’s partner in the Computers for Kids campaign.

With major public and private sector clients – from Whitehall ministries to Waitrose – they shift millions of pieces of new kit every year while also reprocessing hundreds of thousands of older devices.

Mr Williamson inspects a loading bay where staff are packing up a fresh consignment of Mail Force laptops – five to a box – ahead of next week’s new push. This particular batch, it transpires, has been donated to the campaign by Lloyds Bank. ‘A big thank you to all the Mail readers and all the companies,’ the minister shouts above the noise of vehicles and machinery.

We adjourn to an upstairs meeting room where he recalls his own schooldays, starting at East Ayton primary school, in Yorkshire. It was a big day when the first computer arrived.

‘I can remember the excitement as we had numerous fundraising events to raise sufficient money for a single BBC computer,’ he says. ‘It was beige, very big and it had a cassette player. It seemed such a big investment at the time. You realise how much technology has moved on.’

The basics of teaching have never changed, however, as he well knows from personal experience, and not just because he has two school-aged daughters.

His wife, Joanne, is a former primary school teacher who works as a teaching assistant with a reception class (including 15 children of key workers) in his Staffordshire constituency. ‘You can’t teach that age on a computer. And those early years are so important,’ he says.

Meanwhile, his ex-RAF younger brother, Justin, teaches computer science at a secondary school in Yorkshire. Even he finds online teaching frustrating. ‘One of the things he said in the first lockdown is that teaching via Zoom is a lot harder,’ says the Education Secretary.

On behalf of home-schooling parents everywhere, I ask him for a shred of news on when schools will reopen properly. He won’t pre-empt the Prime Minister’s long-awaited ‘roadmap’. But Mrs Williamson is pushing hard.

‘Joanne’s always saying to me: “You are bringing them back, aren’t you? I want them back”.’ She also makes her views abundantly clear on the national curriculum. ‘She always says: “Don’t start fiddling around with it”.’

I ask him about his own schooldays in Scarborough, growing up in a Labour-voting home where Dad was in local government and Mum worked in careers advice.

From the local comprehensive and sixth-form college, he moved across Yorkshire to study social sciences at Bradford University during the Nineties. He ended up running the Conservative association and was national chairman of Conservative Students. 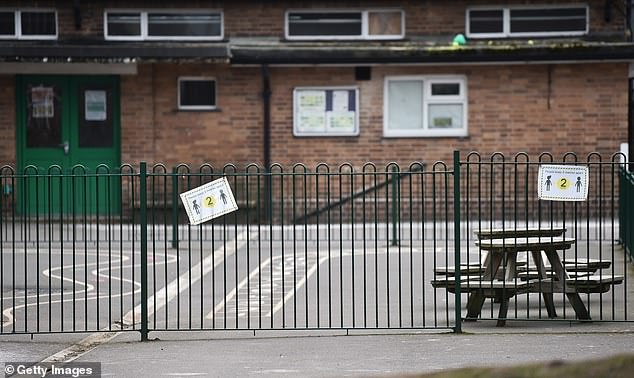 With schools closed, the country is left with the dilemma of hundreds of thousands of pupils in the UK having no access to a computer in their home

‘I’ll be honest with you, the University of Bradford was not necessarily a hotbed of conservatism,’ he laughs. But nor was it the sort of hotbed of zealous monocultural groupthink which now dominates so many British campuses.

It is why Mr Williamson has this week announced the creation of a ‘free speech champion’ for academic institutions. A former law professor, for example, was recently sent a written warning by the Open University for expressing sympathy with JK Rowling. The Harry Potter author has become a non-person in many academic quarters having had the temerity to state that women are, biologically, women.

‘The idea that the world’s most successful children’s author can be no-platformed is a damning indictment,’ he says. ‘Our universities have always been seen as the very best in terms of people being able to speak with freedom. I think we should be proud of that. We should always be there to protect it and that is what I will do.’

After leaving university, the young Williamson began a career in business, during which he fought and lost Blackpool North for the Tories in the 2005 election. He entered Parliament in 2010 as MP for South Staffordshire. Now on his third Cabinet job, he says that it all goes back to inspirational teachers in his youth.

‘Mr Johnson was my history teacher, he was great,’ he says, ‘and ironically my wife ended up teaching his daughter.’

Then there was Mr Ashton, who taught politics, Mrs Williams, Mr Bates, Mrs Watson…. He still sees some of them when he goes back to Scarborough. ‘It’s a small town. You always bump into someone there,’ he says.

I point out that a surprisingly large number of the donors to our Computers for Kids campaign have been retired teachers. He is not surprised. ‘They understand what really matters.

Getting a million laptops out there, with the Mail readers working alongside, makes an enormous difference. But we all want our children back in school. It isn’t just about being sat in the classroom.

It’s about being with your friends and the motivation you get from your teachers. It’s why we have always been clear that schools would be the last to close and the first to reopen.’

So are the unions now on board? ‘The teachers get that,’ he replies. ‘It’s important to differentiate between teachers and unions.’

If we all learn one thing from this, he says, it is the way in which education props up everything else. ‘I don’t think wider society has truly appreciated how far-reaching that value was,’ he says. ‘Someone told me the statistic that closing schools has had the same economic impact as the financial crisis back in 2008.’

You may not be able to apply quantitative easing to struggling children. But you can, at least, give them a laptop.

HOW TO DONATE TO COMPUTERS FOR KIDS

TO YOU, THE READER: How to send us donations

The Daily Mail has launched a brand new campaign, Computers For Kids, to raise money for Mail Force – a charity which aims to provide much needed school equipment and resources for pupils across the UK learning from home.

With schools closed, we are left with the dilemma of hundreds of thousands of pupils in the UK having no access to a computer in their home.

As part of this campaign, companies are donating their old laptops which, for around £15, can be wiped, professionally refurbished and made safe and fit for home schooling. They can then be delivered to a child or young person who needs one.

In addition, the campaign is looking to support children’s needs in other ways such as funding brand new laptops and tablets, and assisting with data access and connectivity for online learning. Any surplus funds will be used to support of the work of UK schools via other means.

TO MAKE A DONATION ONLINE

Visit mailforcecharity.co.uk/donate and follow the steps to complete your donation.

TO COMPANIES: Could you give your old laptops?

Upgrading office computers is something all companies do from time to time – and there has never been a better time to donate old laptops. If you are a company with 50 laptops or more that you could give, please visit www.computacenter.com/daily-mail to check they are suitable and register your donation. We will arrange for collection by our specialist partners Computacenter. Please note: we cannot accept donated laptops from individuals.

COMPANIES SHOULD GO TO: computacenter.com/daily-mail

TO SCHOOLS: Where to apply for the computers

Schools must apply to the Department for Education, which is managing the demand and prioritising the schools most in need. The Mail Force initiative means more laptops will become available more quickly.