EXPRESS INFORMER > News & Politics > EDEN CONFIDENTIAL: So what DID Carrie tell pals about the Royals?

How fortunate for Boris Johnson’s ambitious wife, Carrie, that she has already had her long-awaited stay with the Queen, because there could have been much embarrassment during those moorland walks and barbecues at Balmoral.

For I hear that an American magazine is about to publish a fascinating profile of Carrie that will allegedly include claims that she has made disparaging comments about members of the Royal Family in the past.

The journalist who has written the article, Lara Prendergast, is a protegee of Dominic Cummings’s wife, Mary Wakefield. Cummings quit No 10 last year after falling out with Boris over the influence of the PM’s wife, among other things.

Prendergast has been asking friends of Carrie, 33, about remarks that she’s supposed to have made about senior royals.

‘We’ve been shocked at some of the claims,’ one of Carrie’s pals tells me. ‘We wonder what her agenda is.’

Carrie’s chums insist that she loves the Queen and greatly admires the royals.

The article is also said to report that one of Carrie’s close friends spent Christmas with the couple at a time of strict coronavirus restrictions.

Over the festive period, two households weren’t allowed to mix indoors in London unless part of a ‘support bubble’.

Her pals point to a very unflattering article that Prendergast wrote about her last year for The Spectator, where Wakefield is a senior executive.

It claimed that Carrie was unsupportive of other women and tried to push her animal rights agenda through government.

Prendergast was commissioned by U.S. magazine Harper’s to ‘explain Carrie to a global audience’ and has been trying to get her friends to spill the beans on her thoughts, feelings and personality.

Under the headline, ‘The most powerful woman in Britain,’ Tatler claimed that she was appalled by Theresa May’s ‘John Lewis nightmare’ furniture at No 10. 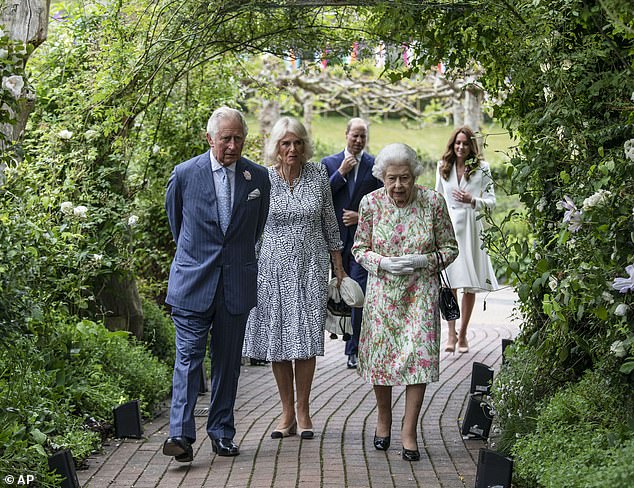 The Queen, Prince Charles, the Duchess of Cornwall and the Duke and Duchess of Cambridge at a reception for the G7 leaders in Cornwall

It sparked the flat redecoration scandal, during which this newspaper found that tens of thousands of pounds had been spent on plush items from Lulu Lytle’s company Soane Britain, including gold wallpaper.

A No 10 spokesman tells me: ‘The Prime Minister has followed coronavirus rules at all times.’

On Carrie’s alleged criticism of the royals, the spokesman says: ‘This is categorically untrue.’ 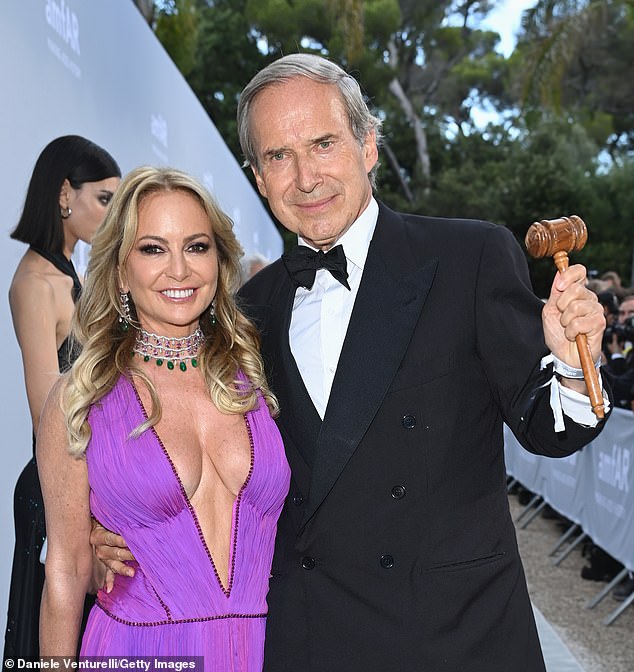 Simon de Pury, 71, and diamond heiress Carol Asscher, who is 17 years his junior

Known as the ‘Mick Jagger of art auctions’ thanks to his charismatic performance with the gavel, Simon de Pury’s love life is even more colourful.

I hear the former chairman of Sotheby’s, 71, who once sold Picasso’s The Absinthe Drinker for £20.5 million, more than double the estimate, has won over diamond heiress Carol Asscher, who is 17 years his junior.

‘Simon is besotted with Carol,’ says my man on the French Riviera, where she’s nicknamed the ‘Queen of St Tropez’.

Carol’s great-grandfather, Joseph Asscher, was commissioned by Edward VII to cut the huge Cullinan Diamond, part of which is now in the Sovereign’s Sceptre in the Tower of London.

De Pury separated in 2019 from his wife, Michaela Neumeister, 50, who had worked for him as Phillips de Pury’s head of art for German-speaking countries.

Why Helena’s toyboy is truly under her spell 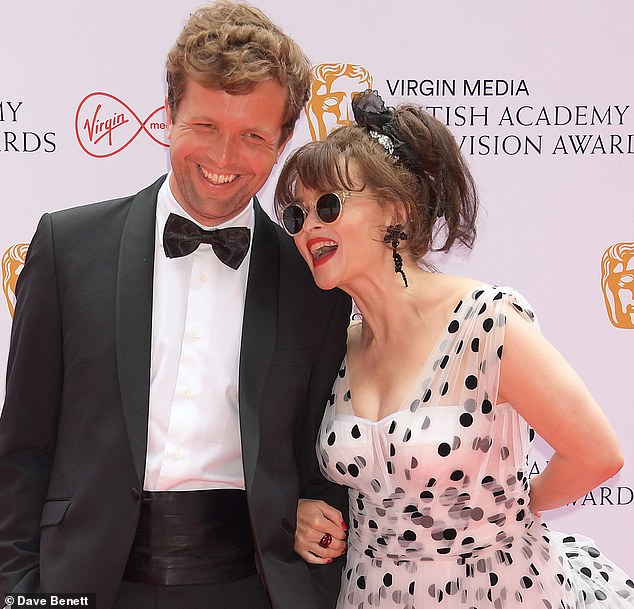 He’s the ‘toyboy’ who has brought ‘unexpected magic’ to Helena Bonham Carter’s life, and now Rye Dag Holmboe has spoken for the first time about their passionate romance.

The 32-year-old writer and art historian beamed with pride as he watched The Crown star, 54, perform a poetry reading at a London party this week.

‘Helena has this really great gift,’ he tells me, adding that he watched her perform in a play at a country house in Sussex this summer. ‘She was brilliant. She has the most extraordinary talent.’

The couple, who have been together for a couple of years, ‘share literary and art interests’, he says. 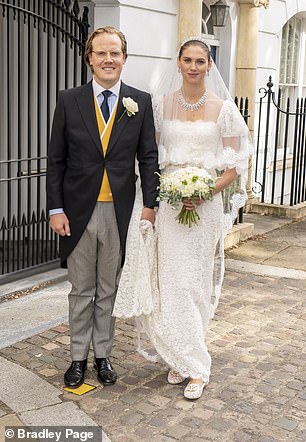 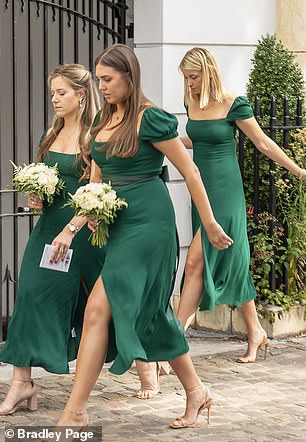 Society model Sabrina Percy has finally got her big day.

The Tatler cover girl was forced to re-arrange her wedding not once, but twice, because of the pandemic.

Sabrina, 31, is a relation of the Duke of Northumberland, who owns Alnwick Castle, which doubled as Hogwarts in the Harry Potter films.

She has previously complained of being wrongly referred to as ‘Lady Sabrina’. Let’s hope she’s happy with her new title of Mrs Page.

Dame Emma Thompson’s status as a celebrated Oscar-winner cuts little ice with her daughter, Gaia, 21, who apparently moved out of their family home to avoid embarrassment when boyfriends turn up.

Of her new abode, Gaia tells me, laughing: ‘You know that you’re not going to open the door, for instance, to a gentleman lover and be instantly welcomed with your mother.’

Dick Francis was the Queen Mother’s favourite jump jockey, but an appeal to erect a £100,000 bronze statue in his honour at Aintree was struggling until billionaire racehorse owner Earl Cadogan dipped into his pocket.

Francis’s name became synonymous with the Merseyside racecourse after the notorious 1956 Grand National, when he was riding the Queen Mother’s horse, Devon Loch, and it inexplicably fell on the final straight with a commanding lead.

‘Charles [Cadogan] wrote to me and explained he was one of the few people still alive who remembered when Devon Loch fell,’ Dick’s son Felix tells me.

‘I’ve known him for such a long time. He was a great friend of my parents and even bought a company from them once. Charles has put in a substantial sum and is even prepared to cover any shortfall.’

The statue is due to be unveiled next year. 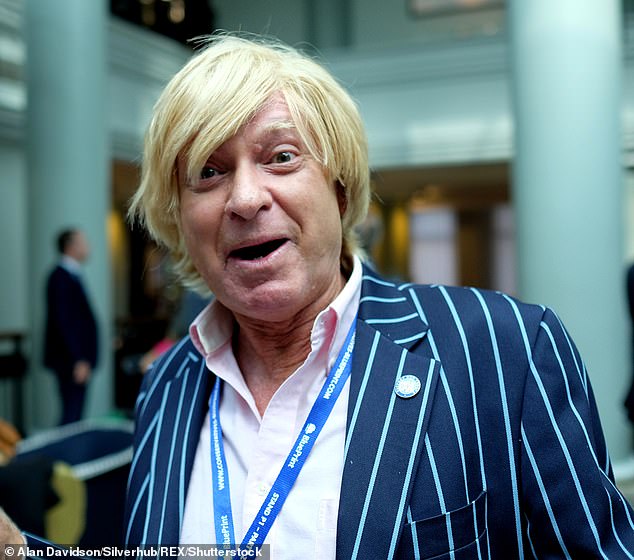 Michael Fabricant, 71, has charged hard-pressed taxpayers £11.98 for a selfie stick

Parliament’s full of vain MPs, but could Michael Fabricant be the most narcissistic of all? I learn he has charged hard-pressed taxpayers £11.98 for a selfie stick.

‘It’s only for when we’re going on official visits and there’s no one else to take a photo,’ explains the member for Lichfield, who is known for his luxuriantly coiffed locks.

‘I certainly don’t use it on holiday — I couldn’t think of anything more crass.’

Fabricant, 71, who lives with ‘life partner’ West Midlands Mayor Andy Street, adds: ‘I like to smile a lot but, unfortunately, I’m not capable of doing a selfie with my finger and thumb.

‘I end up grimacing at the camera and have a permanently distorted face.’

It’s Lady Cara! (in her dreams) 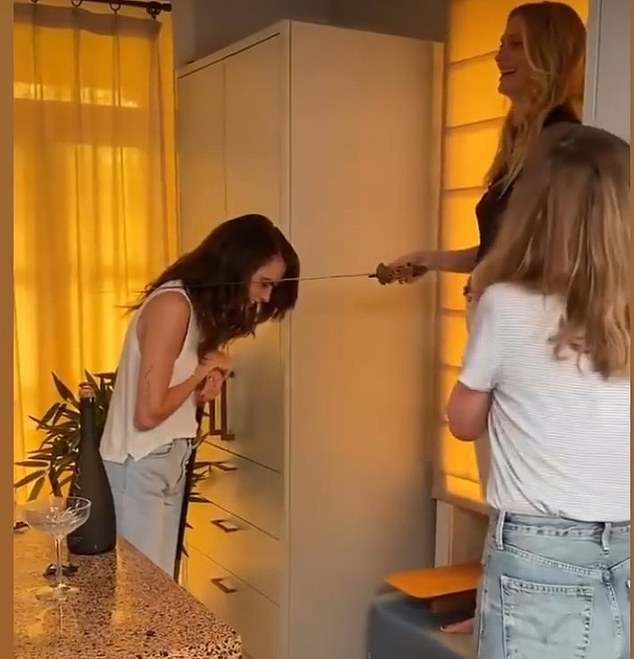 Cara Delevingne, 29, the goddaughter of Dame Joan Collins, was ‘knighted’ by her sister Poppy

She is one of our best-connected models and actresses, but Cara Delevingne has not yet done anything to merit an honour from the Queen.

Her family are, though, determined that she should feel the cold stroke of a sword on her shoulder.

Cara, 29, the goddaughter of Dame Joan Collins, was ‘knighted’ by her sister Poppy, with a sword in a mock investiture ceremony, which took place after a raucous party this week.

Happily, no injuries were sustained. Pop superstar Ed Sheeran suffered a nasty cut on his cheek when he was allegedly struck by Princess Beatrice as she pretended to knight the singer. 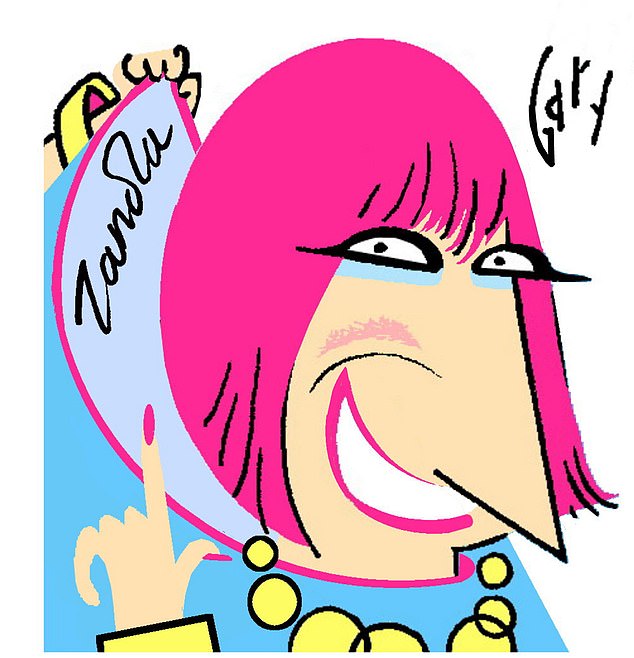 Pink-haired fashionista Dame Zandra Rhodes refuses to be seen in any item of clothing created by one of her rivals.

‘I only ever wear my own designs,’ declares Dame Zandra, whose colourful outfits were bought by Princess Diana and Queen’s Freddie Mercury.

‘If you’re a designer and you’re advertising yourself, and then you’re wearing somebody else’s clothes, what are you advertising? Because you’re selling yourself.’

Dame Zandra, who turns 81 tomorrow, adds: ‘If you don’t believe in what you’re doing, then who does?’