Now, feminist campaigner Nimco has been handed a key role in bringing up the Prime Minister’s five-month-old son, Wilfred.

I hear that Nimco was given the role of godmother to Wilf when he was christened at Westminster Cathedral last month, even though she is Muslim.

‘It might seem unusual because she’s a Muslim, but the Catholic Church insists that only one godparent is a baptised Catholic, a friend of the couple tells me.

‘The other godparents are allowed to be from other faiths.’

Nimco’s importance to Carrie was emphasised when the pair were pictured together on holiday with Wilf in Italy last week.

She is a prominent Conservative and first bonded with Carrie in 2017 when Symonds was running Lord (Zac) Goldsmith’s campaign to become the MP for Richmond Park.

The christening was conducted by Father Daniel Humphreys in the Henry VII Lady Chapel amid great secrecy and Downing Street declines to comment on the ‘private arrangements’ for godparents. 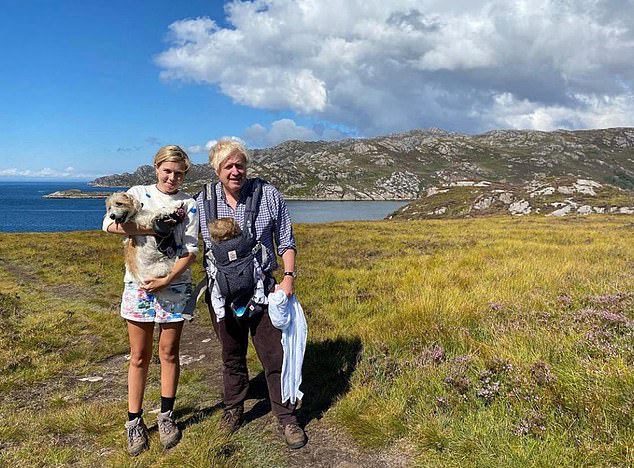 Carrie and Boris (pictured on holiday with Wilf) were both christened Catholics, although the Prime Minister was later confirmed into the Church of England while a pupil at Eton College

But even Boris’s godmother Rachel Billington, the daughter of delightfully dotty late Lord Longford, was not invited to the ceremony.

Carrie and Boris were both christened Catholics, although the Prime Minister was later confirmed into the Church of England while a pupil at Eton College.

The couple’s friend says that Wilf will be educated at Roman Catholic state schools. ‘He will not be going to private schools like Boris and the rest of his children,’ the pal claims.

‘They can’t afford it. They want him to attend a Catholic primary in Westminster.’

Inviting a Muslim to be a godparent is expanding the ecumenism of Boris’s family. The PM’s paternal great-grandfather, Ali Kemal, was a Muslim journalist for the Ottoman Empire who met his wife Winifred in Switzerland, before marrying her in London in 1903.

The future is orange for Claudia Winkleman — and her film producer husband Kris Thykier’s not happy. ‘I don’t know when I’ll stop,’ the Strictly presenter says of her fake tan obsession.

‘My husband hates my tanning and likes me pale. I’m not even pale, I’m blue.’

‘She had a very glamorous bright orange “brick” called Ultra Glow. I was a nerd, with big glasses, a fringe and spots. I tried it and felt: “This is what I’m supposed to look like.”’ She admits: ‘I like being orange — it puts a pep in my step.’ 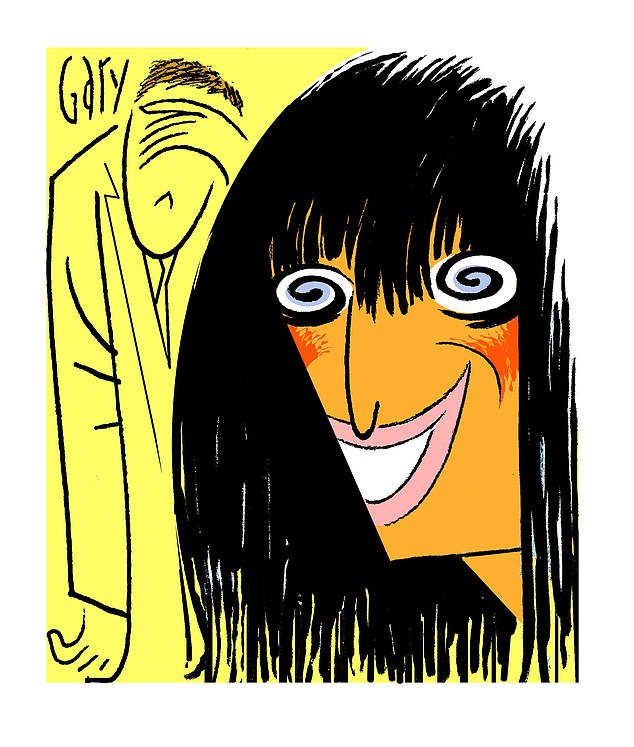 The future is orange for Claudia Winkleman — and her film producer husband Kris Thykier’s not happy. ‘I don’t know when I’ll stop,’ the Strictly presenter says of her fake tan obsession

With her tumbling blonde hair, and a motto of ‘Eat, sleep, fish’, Marina Gibson has helped make fly-fishing fashionable — and is even said to have inspired David Beckham to hold his rod correctly.

In her love life, though, she might be the one who got away.

I hear that fly-fishing guide Marina, 30, who disappointed her shoal of wader-clad male followers when she exchanged vows with shooting enthusiast Edd Morrison, has slipped the marital net after less than two years. 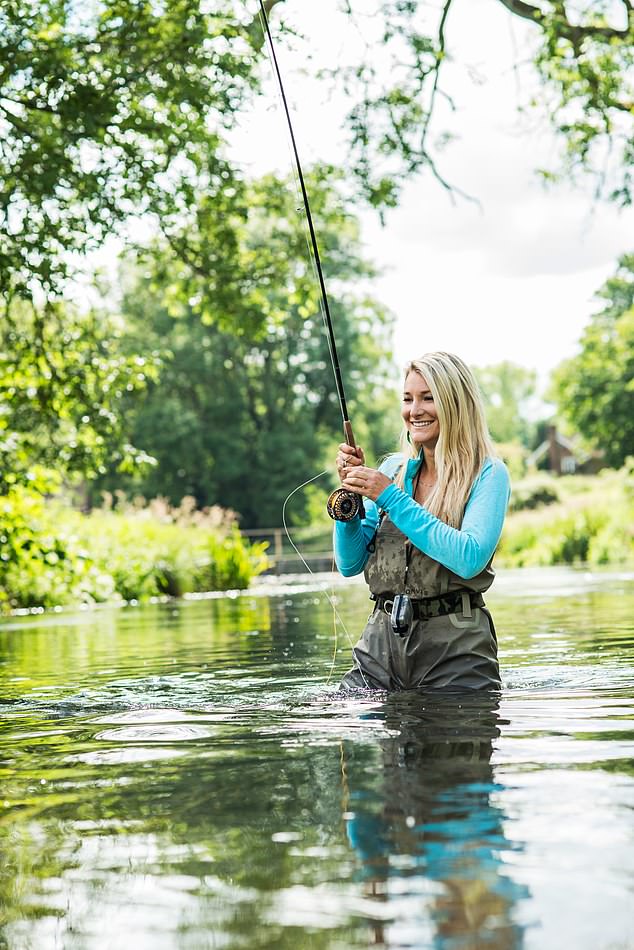 With her tumbling blonde hair, and a motto of ‘Eat, sleep, fish’, Marina Gibson has helped make fly-fishing fashionable — and is even said to have inspired David Beckham to hold his rod correctly

‘Angling really does come first for Marina,’ claims a friend of the couple. ‘She wasn’t ready for domestic ties and would rather spend her time casting a fly on the river than having to wonder what to cook for supper.’

At the couple’s wedding in the Cotswolds, they left the church to a guard of honour of fishing rods before a reception at nearby Donnington Trout Farm. Marina, who works on the River Test in Hampshire, declines to comment, but shouldn’t be disconsolate. After all, there are plenty more fish in the sea.

All Marina will say about it is: ‘Who put you onto this story?’

I hear that Autumn, 42, who separated from the Queen’s grandson in February, is driving round the Highlands of Scotland with a group of girlfriends in hugely expensive supercars. 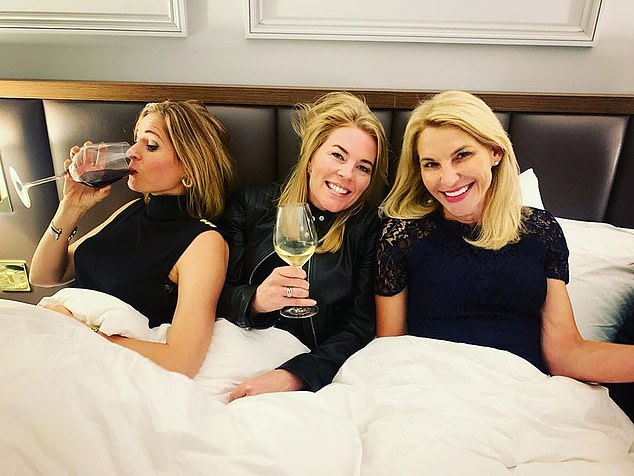 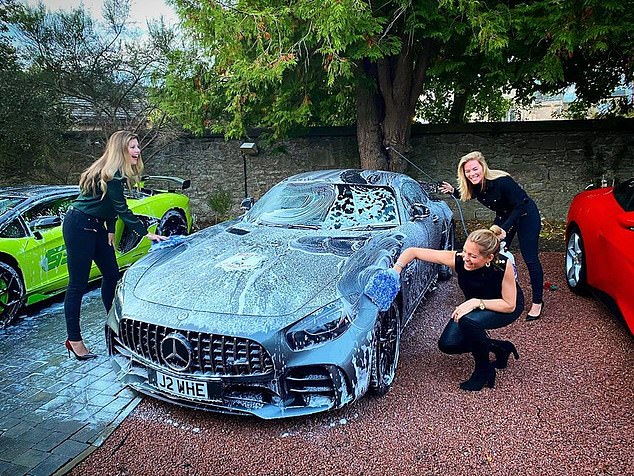 I hear that Autumn, 42, who separated from the Queen’s grandson in February, is driving round the Highlands of Scotland with a group of girlfriends in hugely expensive supercars

One of Autumn’s friends, the artist and illustrator Anna-Louise Felstead, shared this photograph of three of them cosying up together in a hotel bed en route to Inverness.

Anna-Louise made clear that the pandemic wouldn’t stop their partying, trilling: ‘10pm curfews are so dull.’

Let’s hope that Autumn and her party-hearty pals don’t drive into trouble. The 516-mile journey along the North Coast 500 — Scotland’s answer to Route 66 in the U.S. — has seen more than 50 drivers caught in a crackdown on traffic offences over two recent weekends.

Since lockdown was lifted there have been complaints from locals around the route of problems involving speeding cars, convoys of clogging motor homes, poor driving and dirty camping.

Autumn’s trip couldn’t be more different than the Scottish holidays favoured by her mother-in-law. Princess Anne enjoys going round the West coast aboard the Northern Lighthouse Board vessel Pharos in her quest to ‘bag’, or see, all 206 of the region’s lighthouses.

Crisis? What crisis? Despite the slump caused by the pandemic, ‘King of Clubs’ Richard Caring is still snapping up prime sites for his empire. I hear the billionaire signed contracts this week on the building that used to house London landmark La Brasserie, opposite Michelin House in Chelsea. Caring, who runs Annabel’s and The Ivy, could turn it into the new Le Caprice, which shut at its St James’s location this year.

Who’d have thought you could meet a super-rich heiress by using a dating app?

I hear India Rose James, who inherited a sizeable chunk of her grandfather Paul Raymond’s £1 billion Soho Estates property empire, has joined dating app Hinge. India Rose, who split with The Kooks’ guitarist Hugh Harris in 2017, runs the Soho Revue gallery. On the app, she describes herself as a ‘girl boss gallerist’ and says that she enjoys ‘watching movies snuggled up with my dogs’.

As Sex Pistols rebel Johnny Rotten, he railed against the Establishment, but punk rocker John Lydon is still making waves — as a Trump supporter. The singer says: ‘He can lie all day long, but if he puts money in people’s pockets, which he does, and unemployment rates drop and everybody is benefiting from the alleged rich-only taxes, he really is making the country a bit better. I don’t care how many scandals he’s involved with.’

When this dreadful crisis is over, the Queen has a joyful day in store. Harry Herbert — whose father, ‘Porchy’, the 7th Earl of Carnarvon, was her racing manager and confidant — is getting married. And Her Majesty is guaranteed an invitation to the wedding next year at Highclere Castle estate, where Downton Abbey was filmed. Harry, 61, boss of Highclere Thoroughbred Racing, is engaged to Irish TV chef Clodagh McKenna, 45. ‘I am the luckiest man alive,’ says Harry, whose daughter is model Frankie Herbert. The Queen and Princess Diana were among the guests when Harry married Francesca ‘Chica’ Bevan in 1992.