Amid ongoing fury from the Corbynista wing of the party at the sacking Mr Miliband said ‘decent’ Ms Long-Bailey made a ‘significant error of judgement’ in sharing an article online containing an allegedly anti-Semitic conspiracy theory.

The shadow education secretary was fired by Sir Keir after failing to apologise sufficiently for retweeting a Maxine Peake interview in which she linked Israeli security services to the murder of George Floyd.

Mr Miliband was joined by shadow work and pensions secretary Jonathan Reynolds in defending Labour leader Sir Keir’s decision, which has prompted a backlash from those on the left of the party.

Mr Reynolds said he ‘gasped’ when he saw that Ms Long-Bailey had shared online an article by actress Maxine Peake containing an allegedly anti-Semitic conspiracy theory. 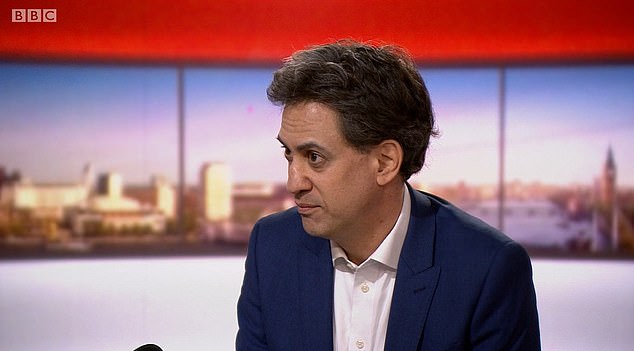 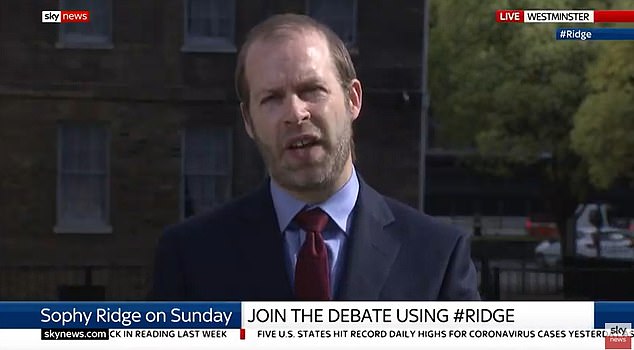 Miliband: Starmer is definitely a better Labour leader than me

Ed Miliband mocked himself as he insisted Sir Keir Starmer is ‘definitely’ a better Labour Party leader than him.

Mr Miliband resigned as Labour leader in 2015 after his party’s crushing election defeat handed power to the Conservatives under David Cameron.

He returned to the backbenches during Jeremy Corbyn’s leadership before Sir Keir made him shadow business secretary in April.

As his interview on the BBC neared its conclusion, Mr Marr said: ‘You’ve seen Keir Starmer now in operation for a few months. Is he going to be a better leader of the Labour Party than you?’

He laughed as he added: ‘Look, I certainly never had his approval ratings. I think he’s made a great start. I think he’s shown not just competence but the kind of seriousness that this crisis demands.

‘I think the more people see of him the more they’ll see the integrity, the principle and decency I know really well.’

Sir Keir said he had acted in order to rebuild trust with the Jewish community after years in which Labour has been embroiled in allegations of anti-Semitism under his predecessor, Jeremy Corbyn.

Former shadow chancellor John McDonnell was among those on the left of the party to reject claims that Ms Peake’s comments were anti-Semitic and said he stood ‘in solidarity’ with Ms Long-Bailey.

On Friday Sir Keir knocked back Jeremy Corbyn and other left-wing Labour MPs as he refused their pleas to reverse his decision.

The new Labour leader faced Mr Corbyn in a crunch meeting with at least 12 front and backbench members of the hard-Left Socialist Campaign Group after initially declining to see them at all.

At the meeting Sir Keir is said to have refused to bow to Mr Corbyn and his allies Diane Abbott and Mr McDonnell.

Mr Miliband said today he did not think Ms Long-Bailey was anti-Semitic but made a ‘significant error of judgement’. He said of the sacking: ‘I don’t think it was an overreaction.’

He went on: ‘The problem about the interview – and I’ve met Maxine Peake, who I think is a perfectly decent person and she’s apologised, and I think that’s significant – was it’s the casualness of it, that is in the way the problem.

‘A terrible thing happens to George Floyd and the Israeli defence force is somehow singled out. I think Britain has had exchanges with American police forces but Britain wasn’t singled out.’

When asked on Sky News’ Sophy Ridge On Sunday programme whether Sir Keir had been right to act, Mr Reynolds said: ‘Yes, the sharing of an anti-Semitic conspiracy theory, I’m afraid, is not something that can be ignored.

‘If people don’t understand why that was anti-Semitic then there are a lot of resources available for people to understand and find that out.’

He added: ‘It caught my breath – I assumed perhaps it hadn’t been read and an apology forthcoming.

‘I don’t know exactly why it is still up there on Twitter but there’s no doubt it is an anti-Semitic theory and we promised zero-tolerance, and that has to be what we practise and preach.’

The Stretford and Urmston MP returns to the shadow cabinet after serving as shadow minister for women and equalities under Jeremy Corbyn’s leadership.

She quit after the referendum, in what was seen by left-wing critics as a coup against the Islington North MP, and went on to chair Owen Smith’s failed leadership bid.

Sir Keir gave her the role of shadow minister for child poverty strategy in April, before elevating her to education spokeswoman two months on.

She worked for Barclays Bank from 1982 to 1997 after university.