EXPRESS INFORMER > News & Politics > Economy bounced back by 15.5% in three months to September

The economy bounced back by 15.5 per cent in the three months to September – but it was already slowing down before the latest lockdown.

Official figures showed UK plc clawed back ground over the summer, as coronavirus cases fell and shops, bars and restaurants were allowed to reopen.

But the recovery tapered off in September, and by the end of the period GDP was still 9.7 per cent below where it was at the end of 2019.

The Bank of England predicted last week that there will be a 2 per cent fall in the last quarter of the year, as curbs hammer activity again. However, there have been hopes of a quicker recovery after good news about the prospects for a vaccine.

The record surge in the third quarter came after a record fall in the second quarter, of 19.8 per cent.

Rishi Sunak admitted that the draconian restrictions to combat the surge in infections had quelled the rebound, but insisted progress on mass testing and vaccines meant there were ‘reasons to be cautiously optimistic’.

On another day of coronavirus-related developments:

Official figures showed UK plc clawed back ground over the summer, as cases fell and shops, bars and restaurants were allowed to reopen 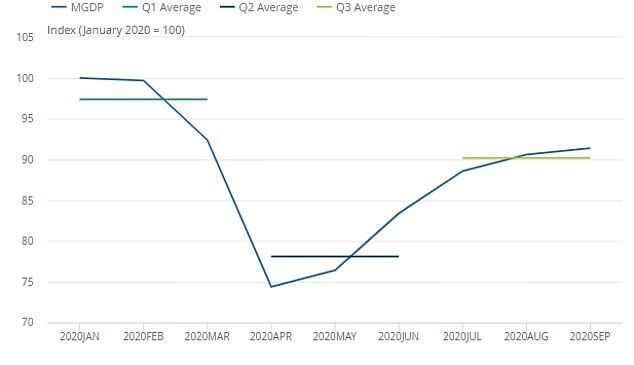 But the recovery tapered off in September, and by the end of the period GDP was still 9.7 per cent below where it was at the end of 2019

ONS spokesman Jonathan Athow said: ‘While all main sectors of the economy continued to recover, the rate of growth slowed again with the economy still remaining well below its pre-pandemic peak.

‘The return of children to school boosted activity in the education sector. Housebuilding also continued to recover, while business strengthened for lawyers and accountants after a poor August.

Chancellor Rishi Sunak, said: ‘Today’s figures show that our economy was recovering over the Summer, but started to slow going into Autumn.

‘The steps we’ve had to take since to halt the spread of the virus mean growth has likely slowed further since then.

‘But there are reasons to be cautiously optimistic on the health side – including promising news on tests and vaccines.

‘My economic priority continues to be jobs – that’s why we extended furlough through to March and I welcome the news today that nearly 20,000 new roles for young people have been created through our Kickstart scheme.’

Economists have raised hopes UK plc could return to pre-pandemic levels within six months after the bombshell news about a vaccine.

A wave of optimism has been sweeping through scientists and ministers after Pfizer announced that early trials found its jabs were 90 per cent effective.

The government has said the UK – which already has 40million doses on order – could start vaccinating people before Christmas. Leading experts have suggested life could be ‘back to normal’ by Spring, as long as the government does not ‘screw up’ the rollout.

The Bank of England gave a grim assessment only last week that UK plc would not return to its level from the end of last year until mid-2022.

But Douglas McWilliams, of the Centre for Economics and Business Research, said GDP could get back to 2019 levels by ‘as early as mid-2021’.

He tweeted this week: ‘This would give a GDP growth rate next year that might be double digit or close to that.’ 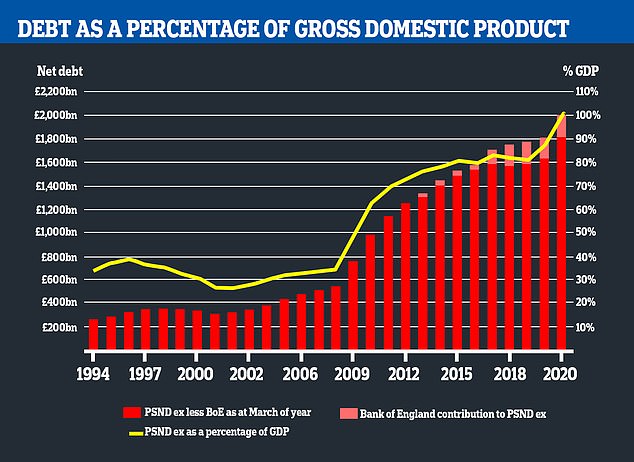 Paul Dales at Capital Economics and Simon French at Panmure Gordon brought their predictions for a recovery forward from the first half of 2023 to the beginning of 2022.

Capital Economics said unemployment was more likely to peak at 7 per cent next year, rather than the 9 per cent previously estimated.

In the latest Monetary Policy report, the Bank projected that economy would to shrink by 2 per cent between October and December, but not to go into a double-dip recession – defined as two consecutive quarters of falling.

GDP was predicted to be 11 per cent lower this year in real terms, worse than the 9.5 per cent the Bank suggested in August.

The central expectation was that the economy would not regain its level from last year until the start of 2022.

The Bank also increased its mammoth bond-buying programme by £150billion to £895billion, warning that UK plc’s recovery was already ‘softening’ before the squeeze was announced on Saturday.