Harry and Meghan have touched down in Santa Barbara, California to be reunited with their children Archie and Lilibet after their whirlwind tour of New York – after a wire poking out of Harry’s pocket suggests the trip will be part of their multi-million dollar Netflix deal.

Touching down in their private jet, the virtue signaling couple and fossil fueled ‘eco-warriors’ embraced members of staff who had accompanied them on the pseudo royal tour before heading back to their Montecito mansion.

Landing back in California late Saturday Meghan, 40, ditched the block color power dressing that saw some social media users mock her as a Michelle Obama wannabe. 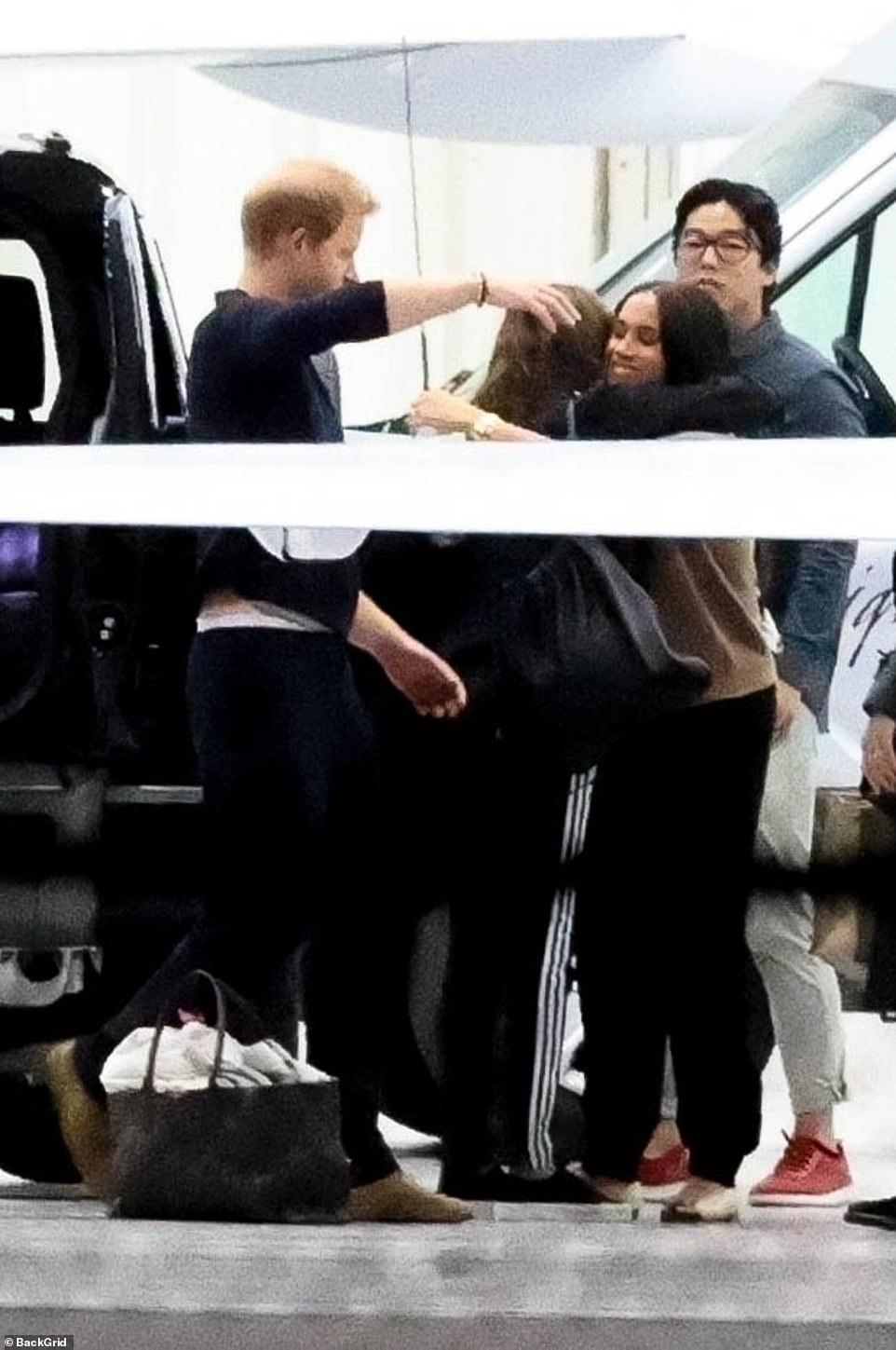 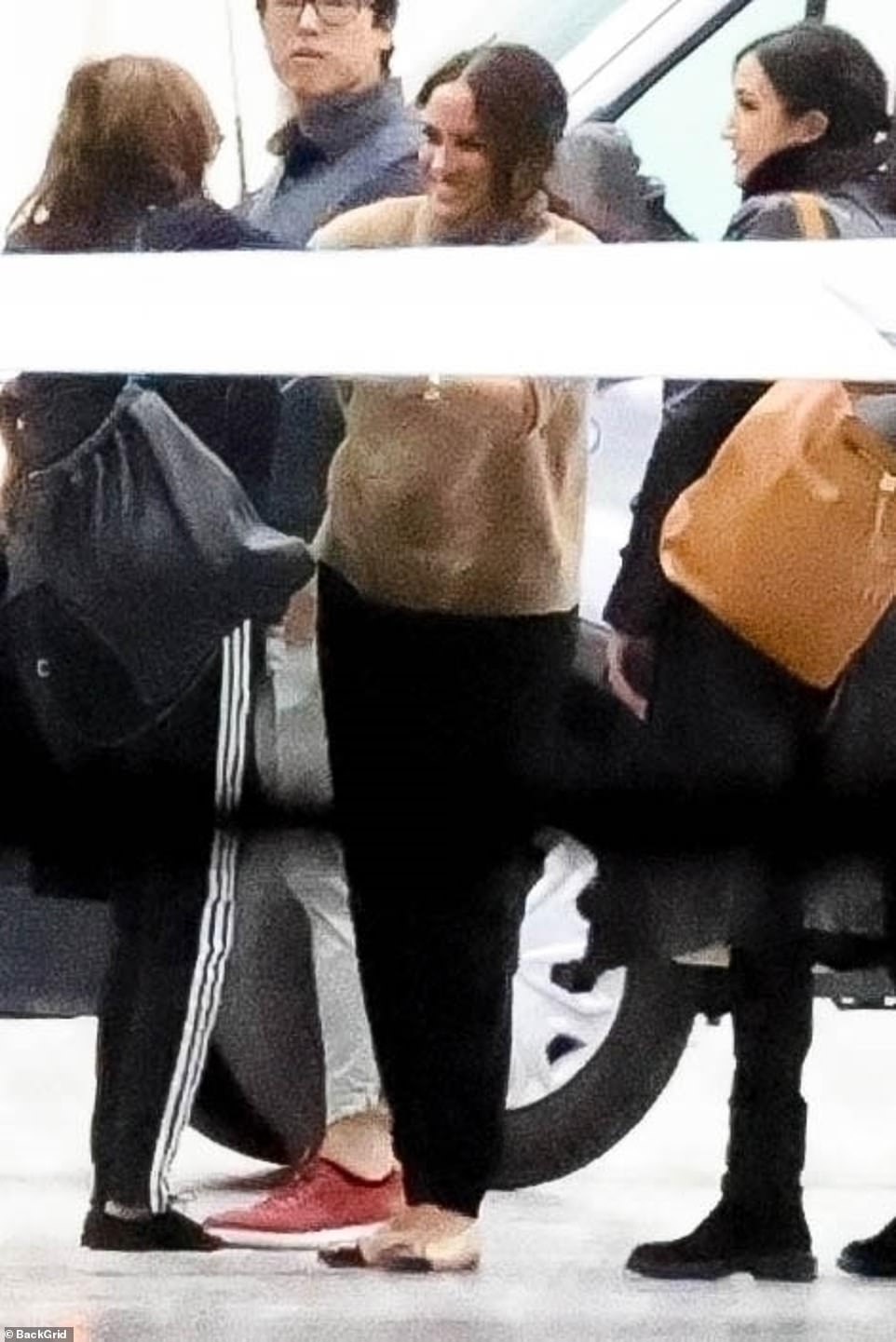 Landing back in California late Saturday, Meghan, 40, ditched the block color power dressing that saw some social media users mock her as a Michelle Obama wannabe

Instead, she appeared casual and relaxed, dressed in loose camel sweater and black pants as she embraced the members of staff who constitute the retired royals’ neo ‘court’ for the trip that began Thursday morning, with a visit to the World Trade Center memorial and Freedom Tower in the company of New York Mayor Bill de Blasio and the state’s new governor Kathy Hochul.

Meghan look-a-like, and head of the couple’s PR Christine Schirmer was among the staff whom the Sussex fondly hugged goodbye at Santa Barbara’s private airport Saturday.

The former Silicon valley big-wig was recently appointed by the couple having worked at Pinterest until last summer. She is a fellow Northwestern University graduate like Meghan.

Harry, 37, was also low-key when he touched down on the west coast last night, swapping his New York suits for navy jeans, a light casual sweater and buff suede boots as he arrived laden with bags which he loaded into a waiting Jeep.

Earlier, the couple had wrapped up their three-day stint on the East coast with an appearance on stage at Central Park’s Global Citizens Festival, dubbed ‘Wokestock.’ 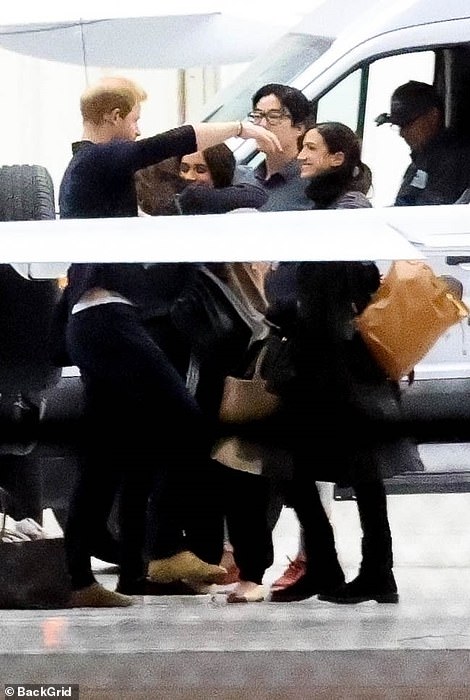 The Sussexes will be reunited with their children Archie and Lilibet following their whirlwind tour of New York. The couple, now headed back to their home in Montecito, took part in a string of worthy pow-wows across three days 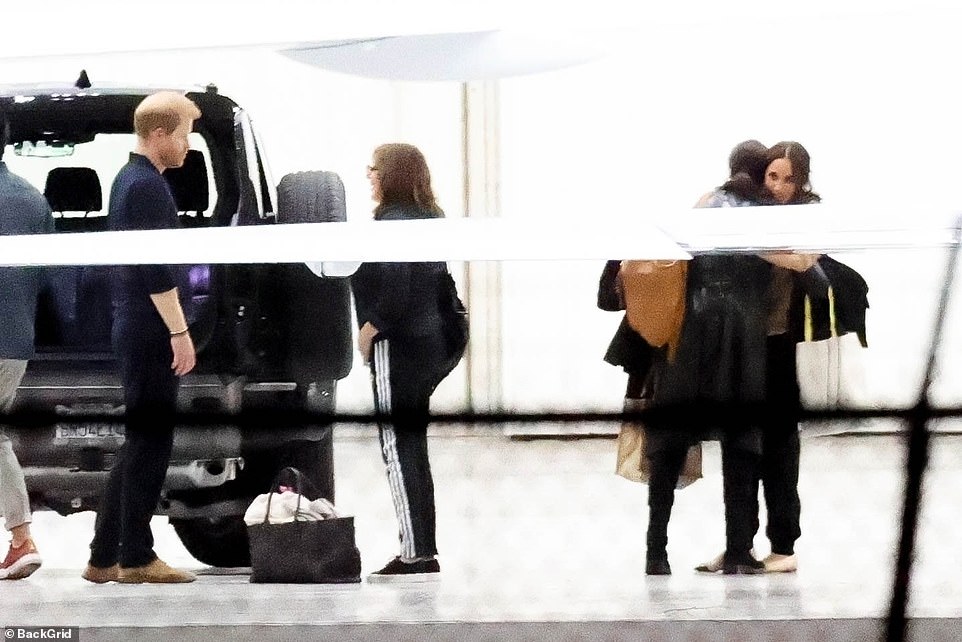 Meghan look-a-like, and head of the couple’s PR Christine Schirmer was among the staff whom the Sussex fondly hugged goodbye at Santa Barbara’s private airport 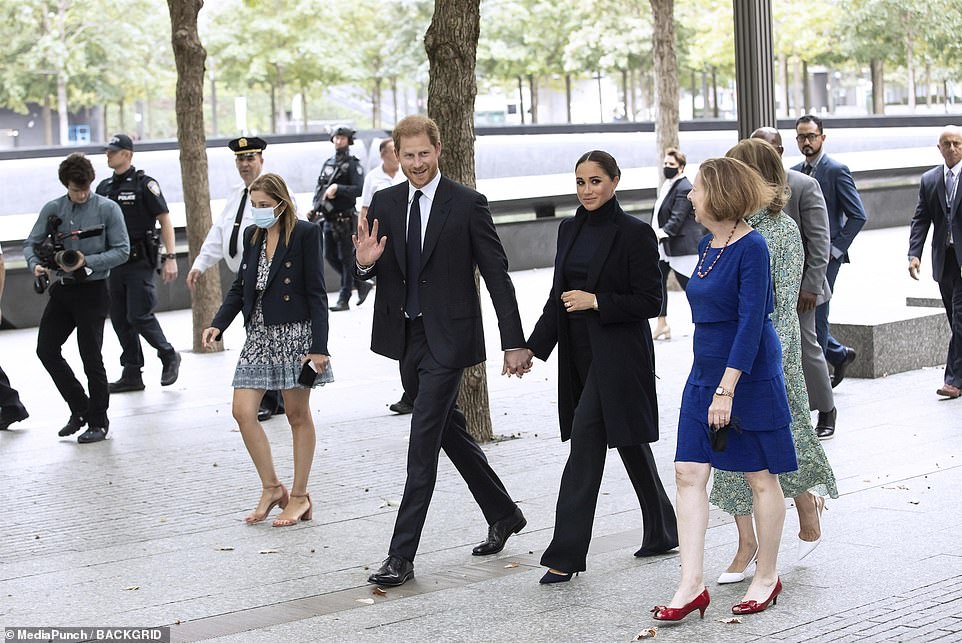 Meghan, who had perplexed onlookers by consistently wrapping up in winter clothing despite the balmy New York temperatures, finally shed her coat as she took to the stage to preach vaccine equity and pandemic awareness to the crowd at the culmination of the couple’s three night stay in the luxury Carlyle Hotel where suites cost upwards of $8,000 a night.

Harry was first to take the mic on the stage on Central Park’s Great Lawn. ‘Are you ready to do what’s necessary to end this pandemic?’ he asked the crowd.

He handed the mic to his wife who addressed the crowd, ‘Hi everybody. It is so good to be back here with all of you. We know that it feels like this pandemic has been going on forever. We get it. It’s been a lot, and some people are just over it.

‘But if everyone is over it, it’s never going to be over with. There’s so much we can do today that can get us closer to ending this pandemic, and that’s why we’re all here.’

She credited, ‘the most brilliant scientists, researchers, frontline worker and selfless public health leader,’ for making it possible for them to be there and dubbed them, ‘humanitarian heroes’ before handing the mic back to Harry. 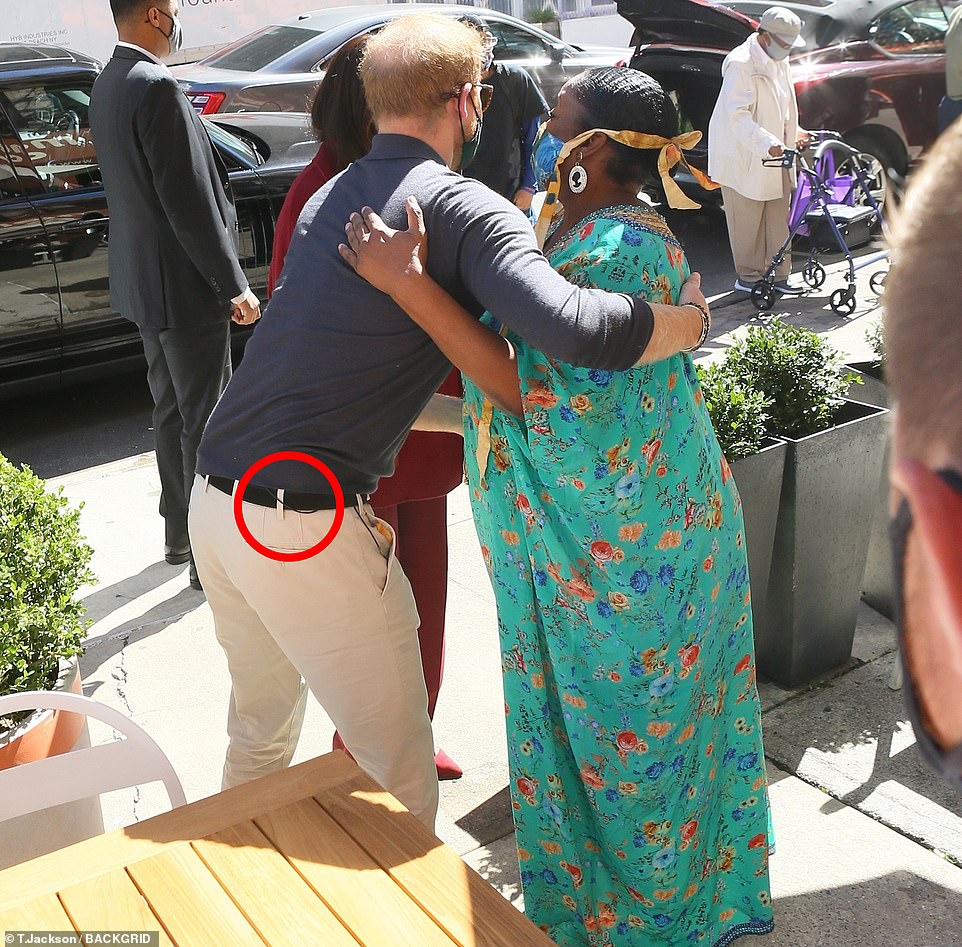 Harry appeared to be sporting a secret mic during his visit with Meghan Markle as he leaned forward to hug Melba restaurant owner Melba Wilson on Friday, in a sign the couple may have been recording the NYC tour 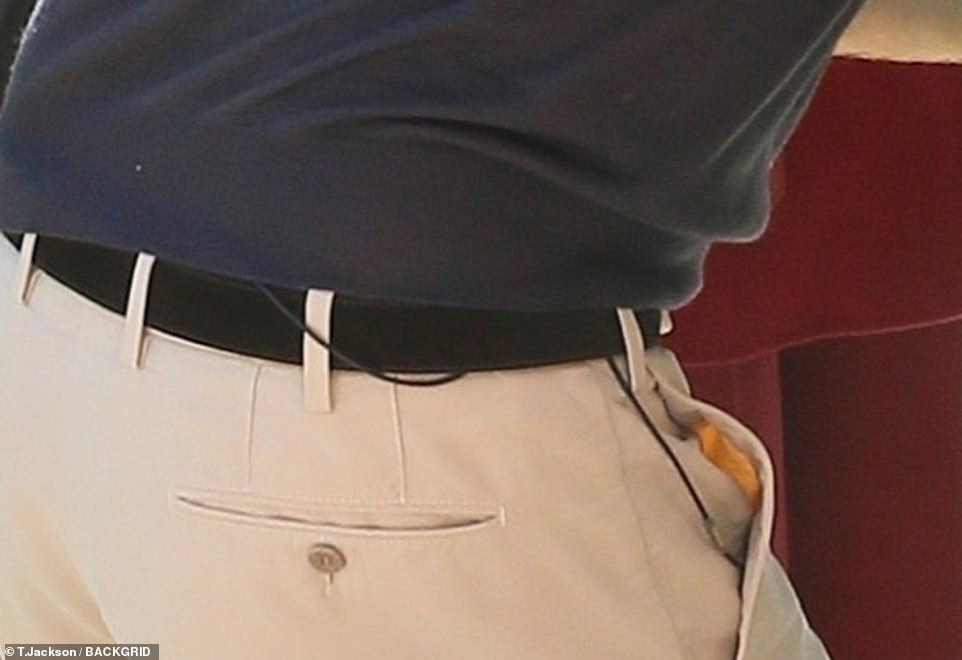 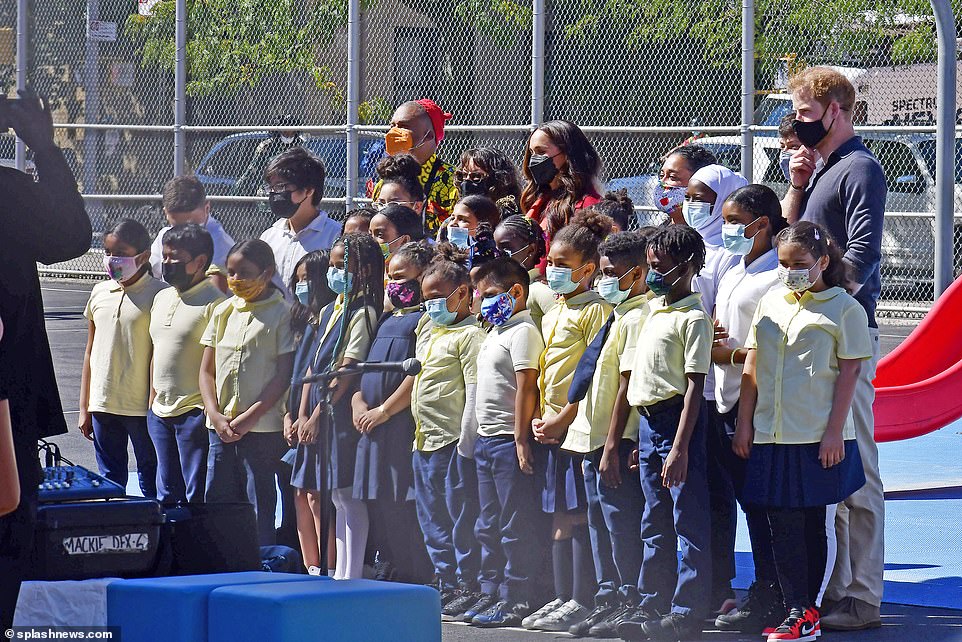 The children and the couple were all seen wearing face masks, which have been mandatory in schools across the state since New York Governor Kathy Hochul reimplemented the mask mandate after she took office last month

He spoke of their meetings with ‘independent world health leaders,’ that week.

In fact the couple took part in string of worthy pow-wows across three days. They followed their World Trade Center visit with a trip to the United Nations where they met with US Ambassador to the UN, Linda Thomas-Greenfield for what they described as ‘an important discussion on COVID-19, racial justice and mental health.’

Their visit also included a meeting with Chelsea Clinton, part of a conversation that, again according to the couple themselves, included ‘a number of the foremost leaders on public health, pandemic preparedness, scientific progress, and community building.’

Posting on their foundation’s Instagram account they professed themselves ‘so encouraged by the spirit of collaboration we heard throughout our conversation,’ and said they were ‘eager to do their part.’

In a bid to ‘do their part’ they also visited PS 123 Mahalia Jackson School in Harlem – with Meghan donning an outfit costing $7,520 and around $387,000 worth of jewelry to visit the school where 94 percent of the pupils are eligible for free meals. 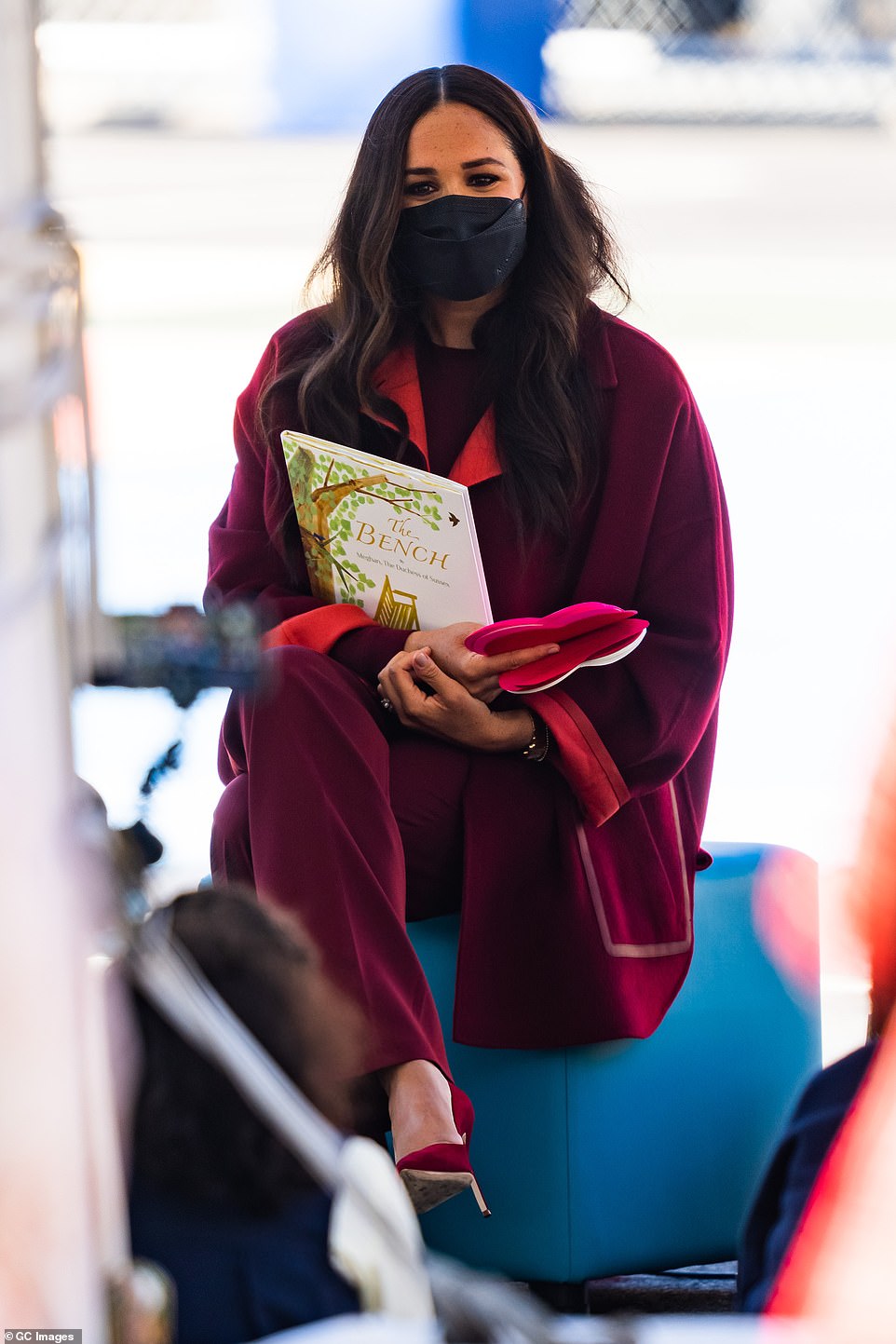 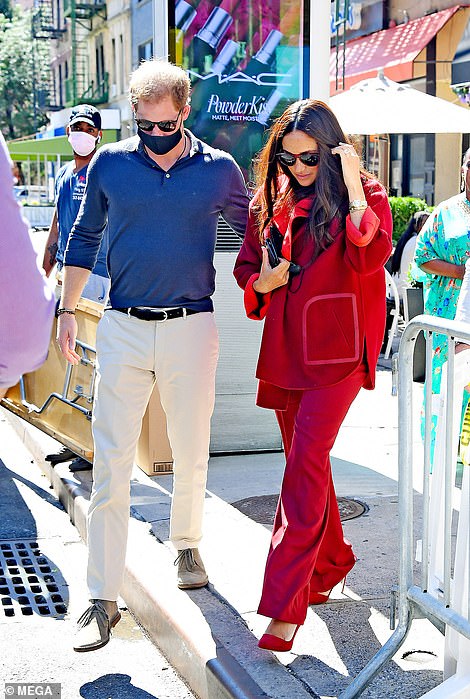 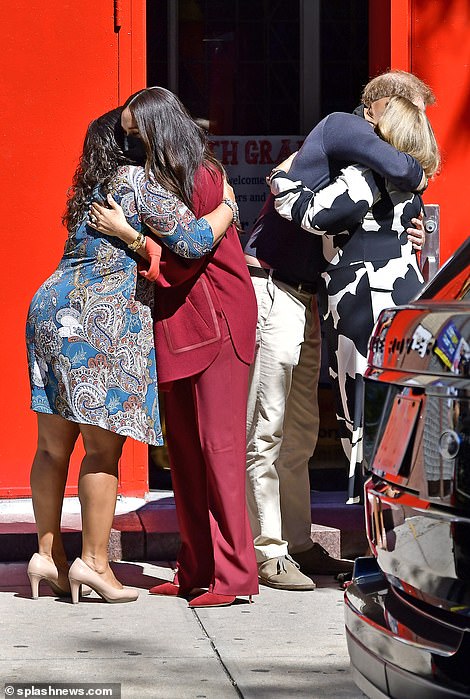 New York, NY – The Duke and Duchess of Sussex arrive at Melba’s restaurant in NYC for lunch after spending the morning with school children at a Harlem elementary school on Thursday

Prince Harry appeared to be wearing a secret mic when he arrived with Meghan to a Harlem soul food joint Friday, suggesting the couple may have been recording their New York tour as part of their multi-million dollar Netflix and Spotify deals.

The wire was seen poking out from underneath the Duke of Sussex’s shirt and trailing into his chino pocket as he leaned forward to hug Melba restaurant owner Melba Wilson.

The visit was purportedly to promote literacy and saw the Duchess read from her own children’s book The Bench.

Next was a lunch of chicken and waffles at local restaurant, Melbas where the couple donated $25,000 to owner Melba Wilson’s Covid relief fund.

A wire spotted poking from Harry’s shirt and into his chino pockets led some to speculate that the couple were filming their visit for their multi-million dollar Netflix or Spotify contracts.

The couple were also frequently seen being followed around by a man carrying a video camera. 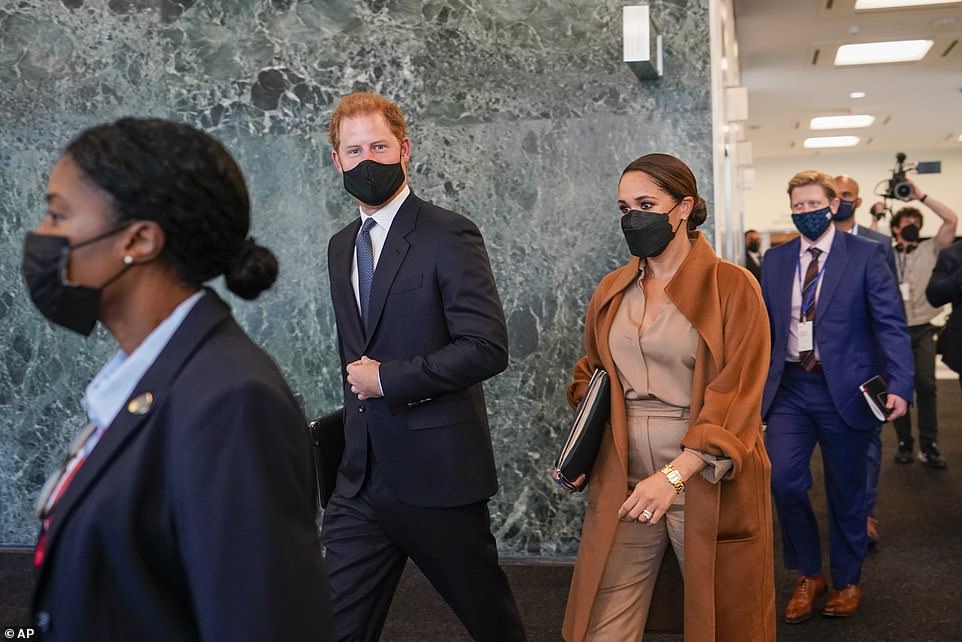 They had an ‘important discussion’ on COVID-19, racial justice and mental health with US Ambassador to the UN Linda Thomas-Greenfield

Prince Harry and Meghan, the Duke and Duchess of Sussex are escorted as they leave the United Nations headquarters

Later on Thursday Harry met with the President of Angola, Joao Lourenco, to discuss the country’s de-mining efforts and environmental issues before taking off in the cavalcade of gaz-guzzling vehicles in which the couple was transported around town.

DailyMail.com exclusively captured video of the retired prince in an animated meeting with three others, including Archewell Foundation Executive Director, James Holt, that same evening.

Ensconced in a corner table in the Carlyle Hotel’s Bemelmans’s bar, Harry spoke earnestly and gestured frequently as his drinking companions listened and took notes.

With the Duchess nowhere to be seen he wrapped up his drink after 45 minutes or so and left clutching an iPad and notepad.

Harry and Meghan had enjoyed drinks with her friend, and their one-time matchmaker, Misha Nonoo and her husband at the very same table on Wednesday, the night before when they had dipped under the radar and arrived in the Big Apple. 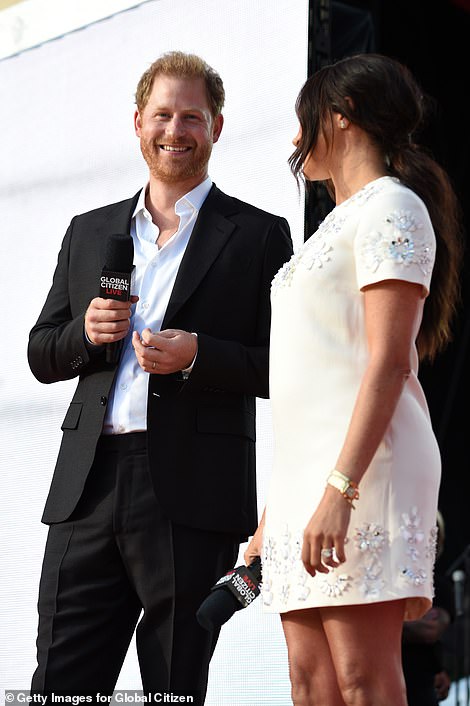 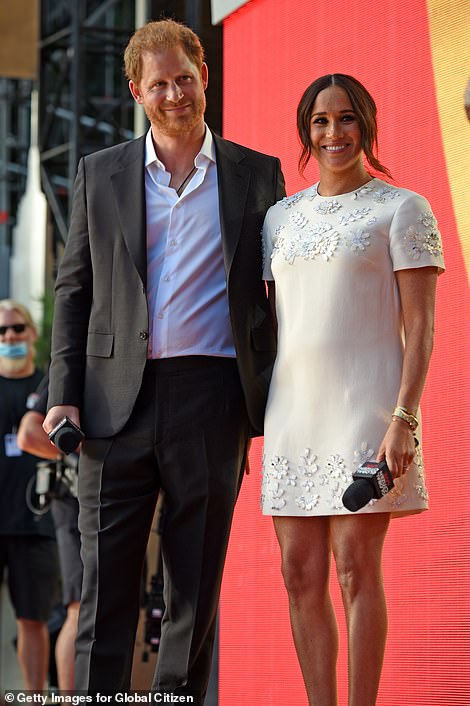 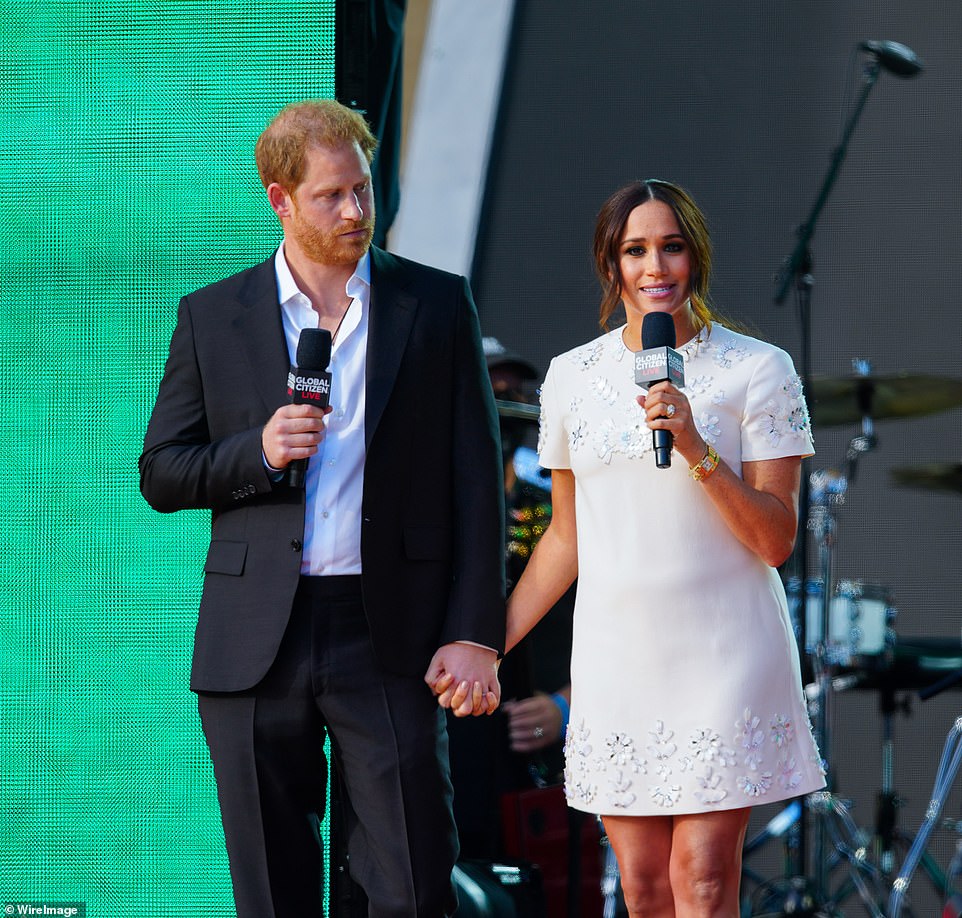 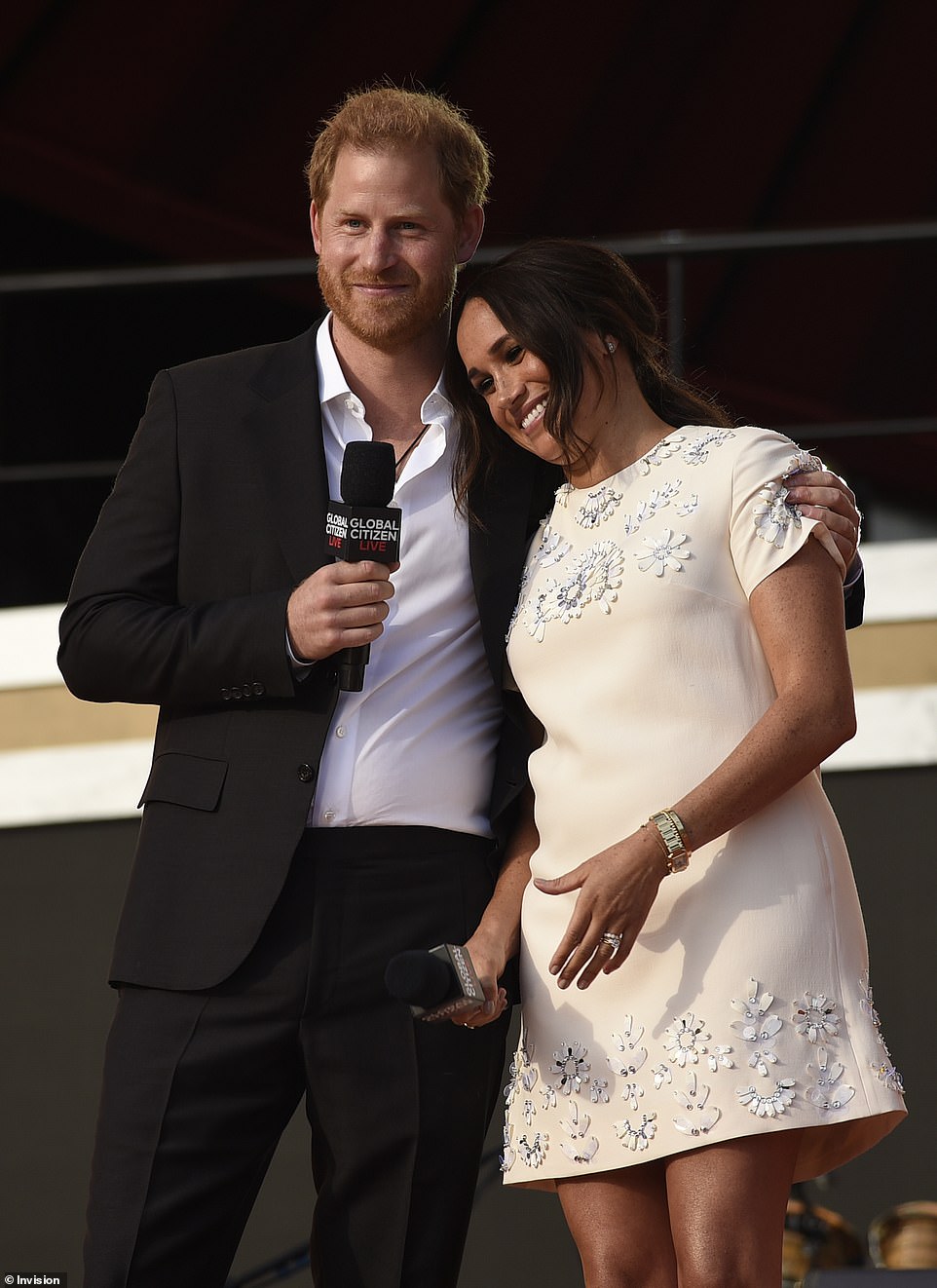 According to Judi, Prince Harry digging his fingers into Meghan Markle’s shoulder suggests a ‘squeeze of affection’