A mindfulness coach who celebrates Christmas by regifting presents to loved ones has hit back at critics who say “it’s mean” – explaining that she is reducing waste and helping the planet.

Mother-of-three Hollie Barber, 29, is concerned about the future her children Alexis, 10, Zachary, eight, and Nox, two, will grow up in because of climate change and is determined to have a sustainable Christmas this year.

Along with glass artist partner Josh Cottrell, 32, she has been making eco-friendly lifestyle decisions at their home in Thornford, Dorset, since her youngest child was born in September 2018.

Hollie Barber, 29, (pictured middle, at the back) from Thornford, Dorset, is aiming to celebrate a waste-free Christmas with her family this year 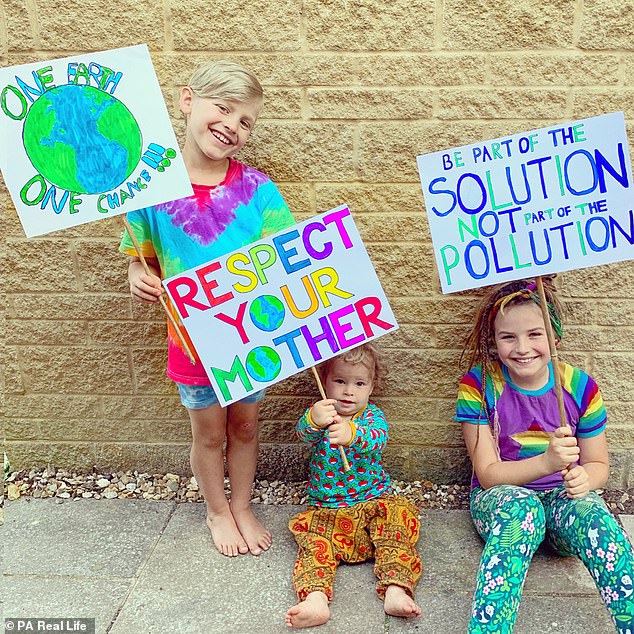 She has been making eco-friendly lifestyle decisions at their home in Thornford, Dorset, since her youngest child Nox (middle) was born in September 2018

To do her bit to save the planet this Christmas, Hollie is giving family and friends second-hand, homemade or re-gifted presents, wrapped in fabric and putting up decorated sticks rather than a tree.

She will also be serving vegan food which was free of plastic wrapping.

Hollie said: ‘I always come back to how I would feel if I was given a re-gifted present and I wouldn’t feel any different from getting a new one.

‘It’s not about giving away something you don’t like for the sake of it – you’re still putting thought into it.

‘I have three children and I’m concerned for their future. We are really seeing the effects of climate change. 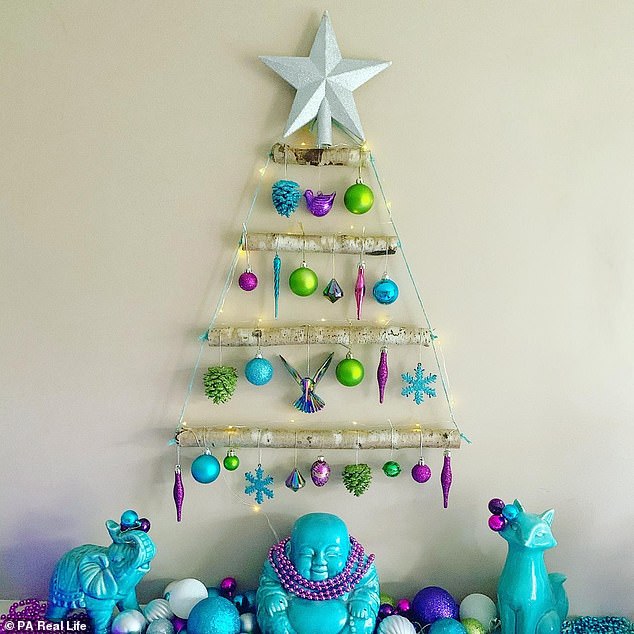 Hollie and her family decided to make their own Christmas tree this year rather than buy a real one. They chopped up a large stick into different sized sections and decorated it with baubles she has owned for years 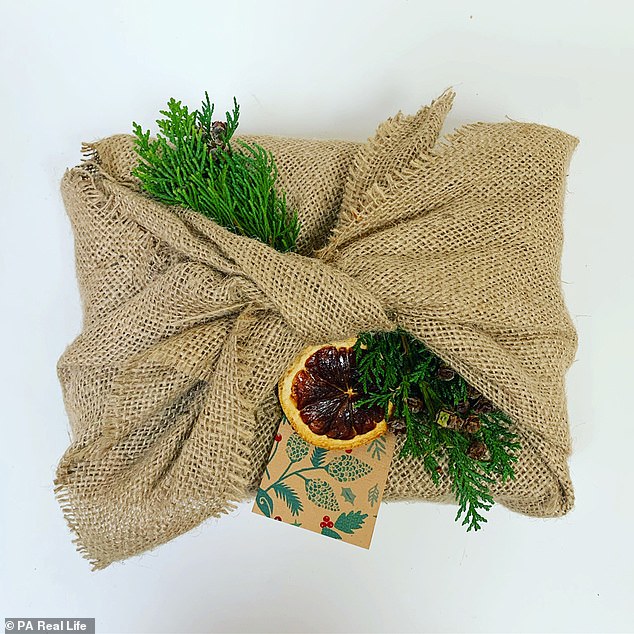 Instead of buying normal wrapping paper this year, Hollie is using the Japanese art of Furoshiki, or fabric wrapping

‘I really care about protecting our planet and everything on it. I live by the philosophy that no one is too small to make a difference.’

Despite always being interested in the environment, it was only after having Nox her journey into sustainable living began after realising how much she needed to buy for her new baby.

‘We wanted to make sure having a baby didn’t impact at all on the planet,’ she explained.

She continued: ‘I chose to use reusable cloth nappies and everything else followed suit.

‘I started getting secondhand clothing for Nox and that kicked off a different way of shopping and living for the rest of us.’ 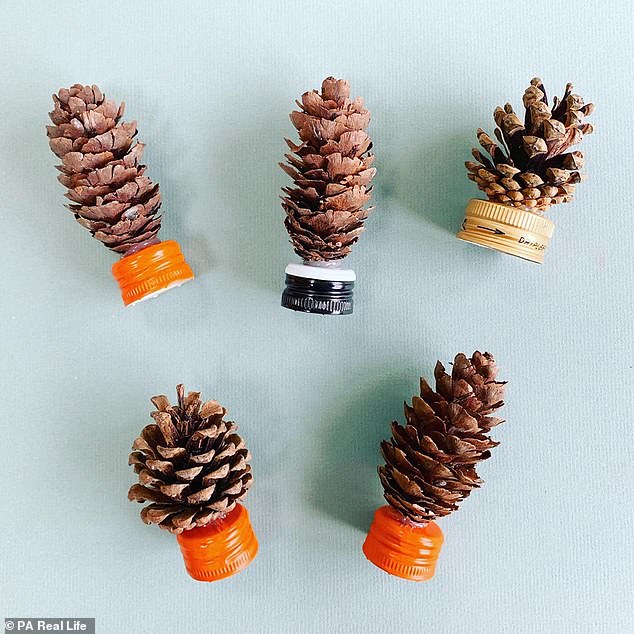 To help decorate their home for Christmas Hollie and her family have also been busy making their own decorations, such as with these pinecones 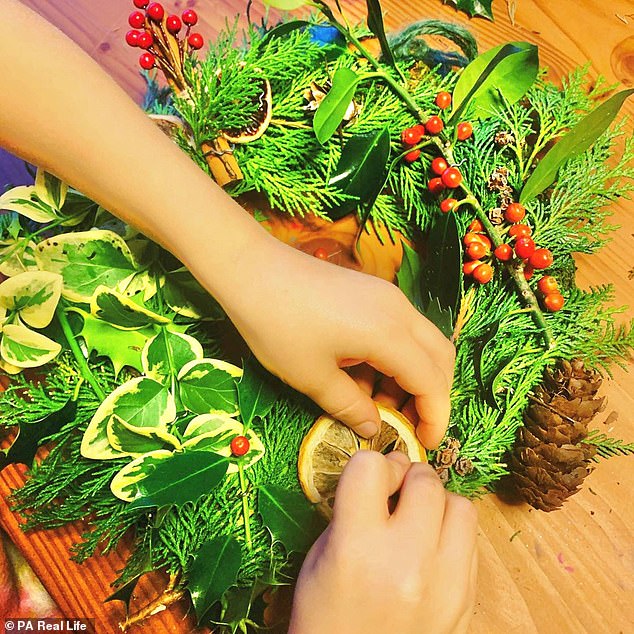 The eco-friendly family also decided to make their own Christmas wreath rather than buy one, and decorated it with foraged materials and old ribbon

Having given up buying new clothing in 2020 Hollie only buys secondhand items for her family and even upcycles older pieces to give them a new lease of life.

Additionally, her children only get wooden toys which are normally preloved so that they don’t have to buy any plastics.

In July, Hollie started an Instagram challenge calling on people to try and have a plastic-free month.

Using the hashtag #setmeplasticfree, 2,000 people took part and they worked together to share tips and resources.

Hollie said: ‘In reality, it wasn’t possible for me to be entirely plastic-free for the month, due to food shopping. 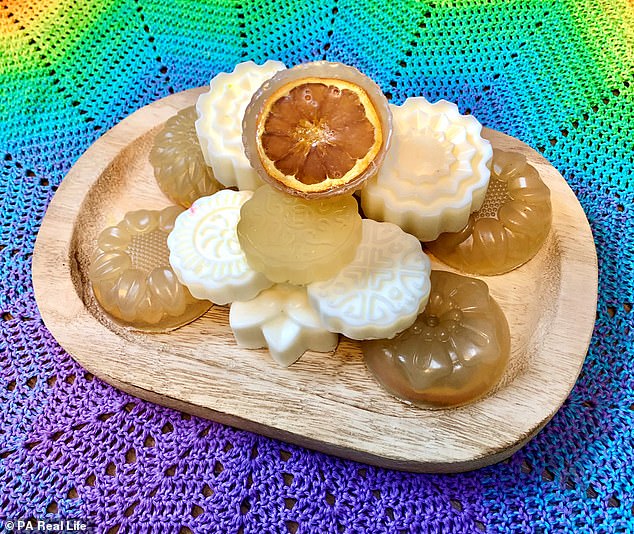 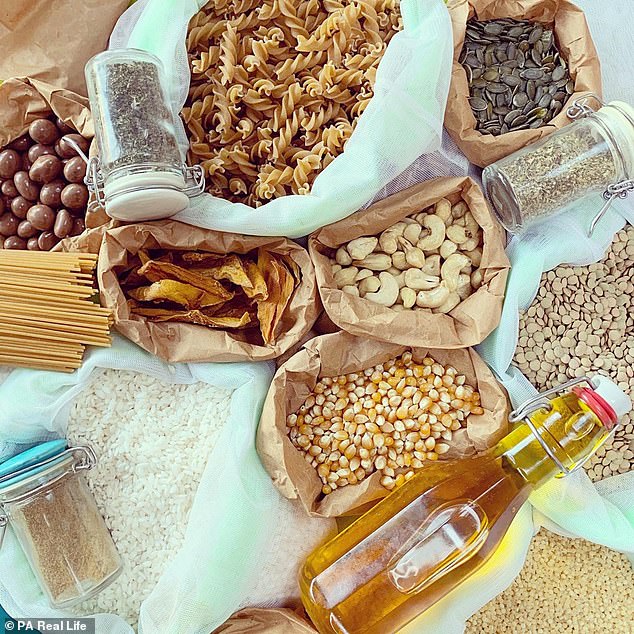 To feed her family this year Hollie will be cooking a vegan meal, with all the food and spices having been bought from suppliers that don’t provide packaging

‘But keeping track of all the plastic waste really makes you realise how much of a challenge it is – and how we do it mindlessly.’

Finding the experiment a resounding success, she set herself another goal – to have a zero-waste Christmas.

Once again encouraging others to join in, she has, for the past three weeks, been running an Instagram photo challenge.

She said: ‘Me and another account @earth_punk_mama, are running a photo challenge all month, asking people to get involved and share their ideas for how to have a zero-waste and eco-friendly Christmas.

‘The first week, we focused on handmade things, so lots of people were sharing their ideas for handmade gifts and decorations. 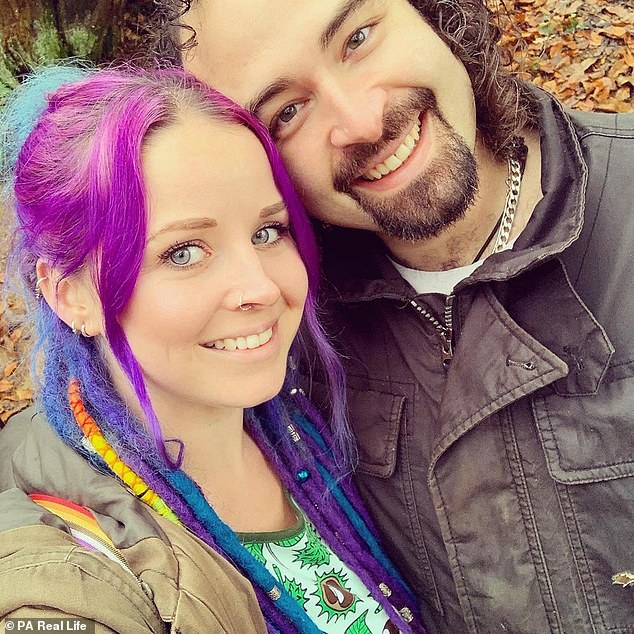 Hollie and glass artist partner Josh Cottrell, 32, (pictured) will only get their children wooden toys to cut down plastic waste 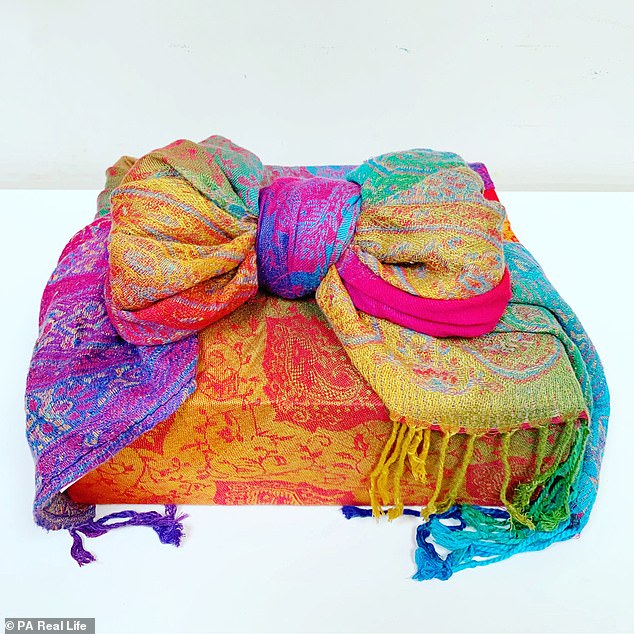 ‘Last week, the theme was secondhand, and this week is about food and how we can lower our waste in that area.’

Instead of using normal wrapping paper this year, Hollie is using the Japanese art of fabric wrapping, known as Furoshiki.

She said: ‘It’s really easy to do and there are lovely ideas on Instagram.

‘You can just use whatever fabric you have. For example, I’ve used pashmina type scarves – then embellished them with dried orange peel or fir from a tree as a decoration. I’ve also made tags from last year’s Christmas cards.

‘People don’t realise, but a lot of the wrapping paper in shops comes with glitter on it and is, itself, wrapped in single-use plastic.’ 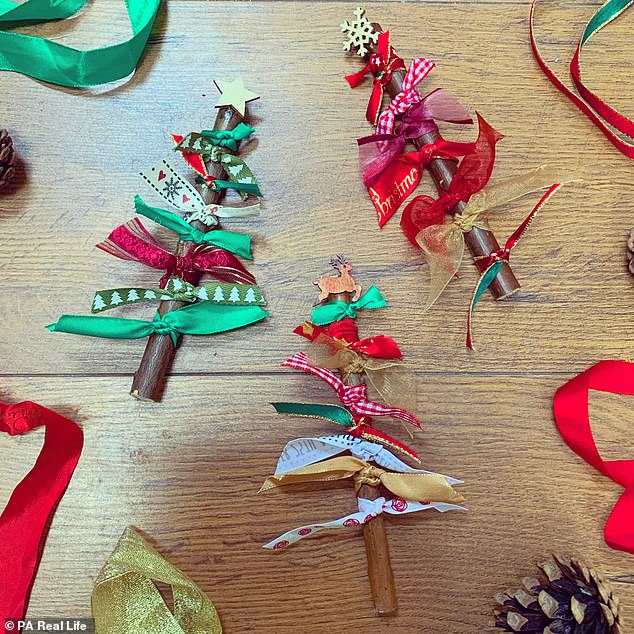 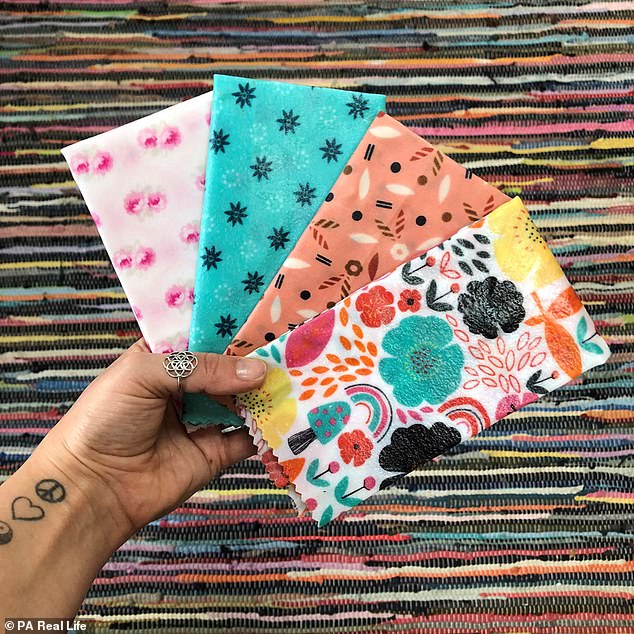 On top of breaking the tabo around re-gifting, Hollie also wants normalise giving gifts such as handmade soaps, fudge and cookies.

‘This year, many of us either don’t want to or can’t go into shops anyway, so I hope I can encourage more and more people to go for handmade gifts, or regifting, which is a good way to declutter,’ she said.

Instead of a proper Christmas tree, this year Hollie and her family have cut up a large stick into different sized sections, arranged it into a tree shape and then decorated it with traditional baubles she has owned for years.

A homemade wreath has also been hung up, decorated using old ribbons.

‘It looks wonderful and we’re not ending a tree’s life,’ she said. ‘When you see all these trees cut down in garden centres, it’s such a waste.’ 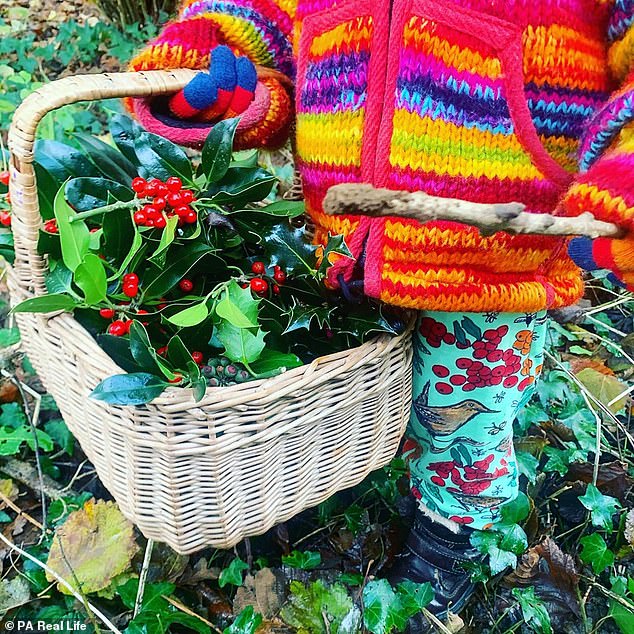 In order to make many of their Christmas decorations, Hollie and her family had to go out foraging for raw materials 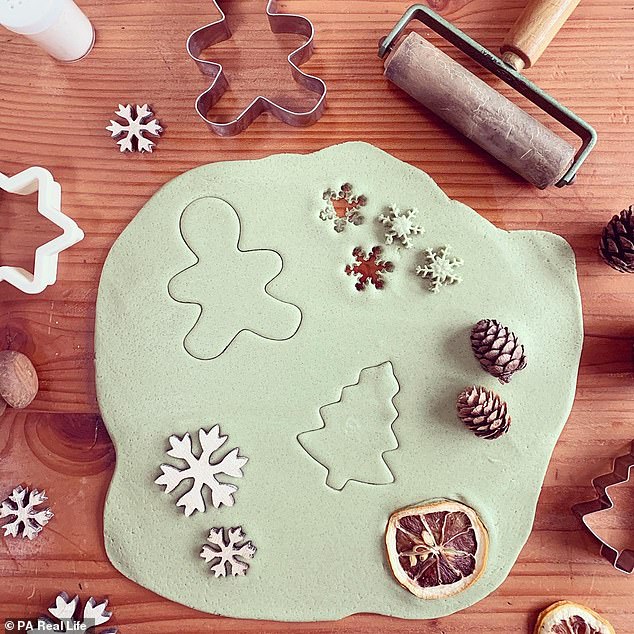 For her Christmas dinner, Hollie will serve up fruit and vegetables from a special zero packaging box by organic farm company Riverford.

Even the herbs and spices she uses to flavour her food are from zero-waste stores.

‘I use colour-coded drawstring mesh bags and little spice jars. I take them to the shop with me,’ she said. ‘That way, I can do my shop without using any plastic.’

With most families unable to see each other at Christmas, Hollie also advises people to freeze, give away and donate excess food to cut down of any wastage.

She said: ‘There are also two apps I use and would really recommend – Olio and Too Good To Go – where you can upload your surplus food for local collection to other app users. 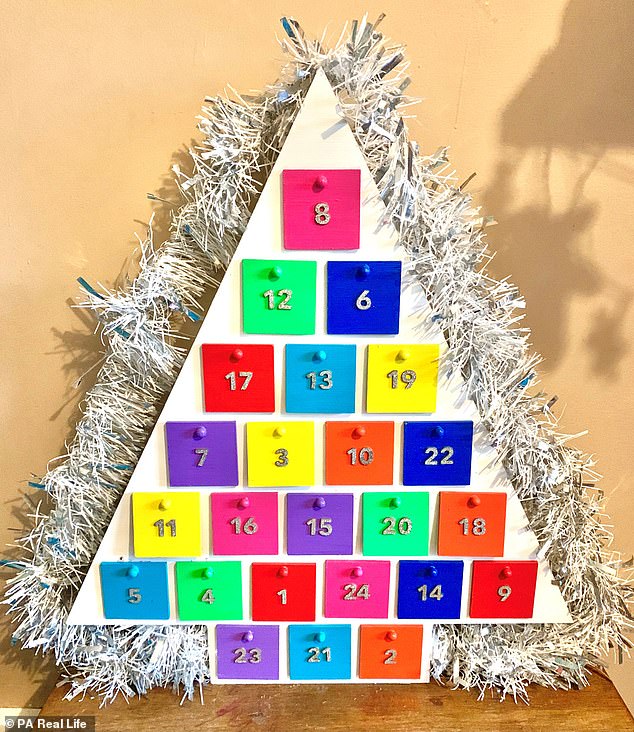 When it comes to their advent calendar, Hollie and her family also stay green, with this reusable calendar coming out every year 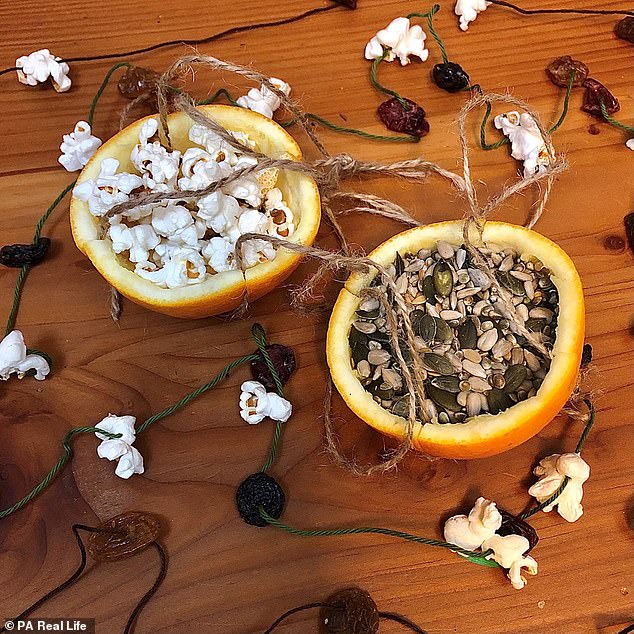 Even the little details about Christmas, such as these bird feeders, are eco-friendly, having been made from orange rinds and filled with popcorn and seeds

‘They could be such a valuable resource for so many feeling overwhelmed by the extra food and not able to get to a food bank.’

Hollie has calculated that her family’s Christmas will cost just £80 in total – including food and presents.

Although she admits it isn’t practical to live a completely waste-free lifetsyle, especially with three young children, she wants to encourage others to make small changes.

She said: ‘This time of year is the most wasteful.

‘I remember last year driving through my village and the amount of rubbish I saw on the side of the road was quite frightening. It makes you think there really is a better way.

‘I don’t think anyone can live completely zero waste but making small steps here and there can make a big difference.

‘I want to encourage people to make those small changes, without feeling overwhelmed.

‘Every time you say no to a plastic bag in a shop, every time you buy something secondhand, you are making that conscious decision to live more sustainably. It all adds up.’