Europe’s cost of living crunch intensified as prices soared in Germany, France and Italy, sparking warnings that interest rates will rise ‘like a runaway train’.

On another bleak day for the eurozone, inflation in its three biggest economies rose more than was previously feared.

The figures came amid fresh warnings from the European Central Bank (ECB) that more interest rate rises are coming as it battles to put a lid on inflation.

Pain: The European Central Bank has warned that more interest rate rises are coming as it battles to put a lid on inflation

The ECB this week doubled interest rates – hiking them from 0.75 per cent to 1.5 per cent.

ECB official Peter Kazimir warned the rises were ‘like a runaway train’ yesterday, adding: ‘It will go even higher in December and the first months of next year.’

The figures sent borrowing costs across Europe higher on expectations of further rises from the ECB. 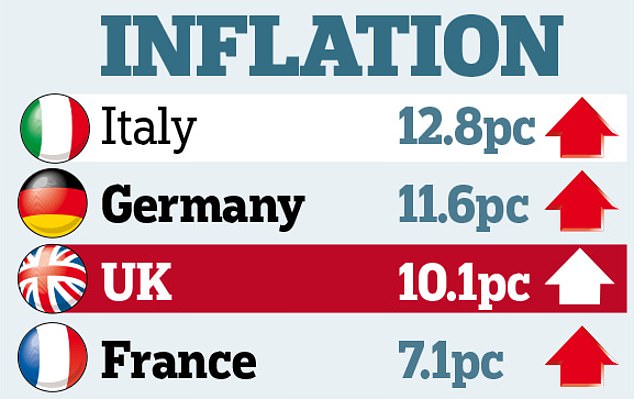 ‘The truth is that the outlook of rate hikes remains very uncertain as it is data-dependent,’ Massimiliano Maxia, of Allianz Global Investors, added.

‘It wouldn’t surprise me if the ECB had to raise rates more than expected in December.’