President Joe Biden was in for a surprise when his comments to people at the White House’s Easter egg roll were interrupted on Monday by none other than the Easter Bunny itself.

Biden was filmed speaking with reporters and guests at the cheerful holiday event when he began discussing Afghanistan, eight months after he presided over the US military’s chaotic withdrawal from Kabul that ended 20 years of American boots on the ground there.

The president, 79, started to answer Afghan reporter Nazira Karimi’s question and was heard saying: ‘Pakistan should not and Afghanistan should be — people should be free…’

But Meghan Hays, a White House press official dressed as the Easter Bunny, then quickly interrupted him and ushered him away in a desperate bid to avoid another gaffe.

‘How bad does the White House staff have to think Biden is to calculate that sending in the EASTER BUNNY to interrupt a gaggle is better optics than whatever he was about to say on Afghanistan?’ former Orrin Hatch aide Matt Whitlock said. 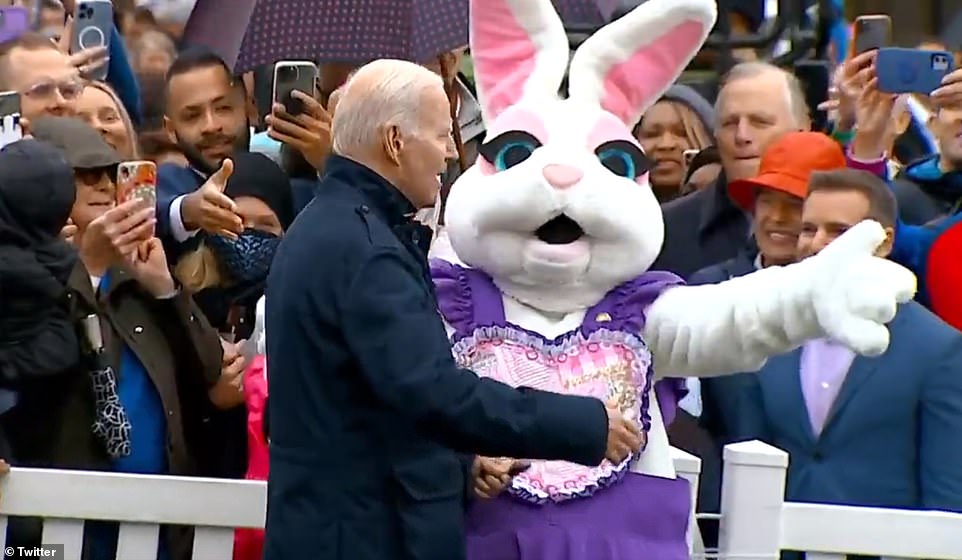 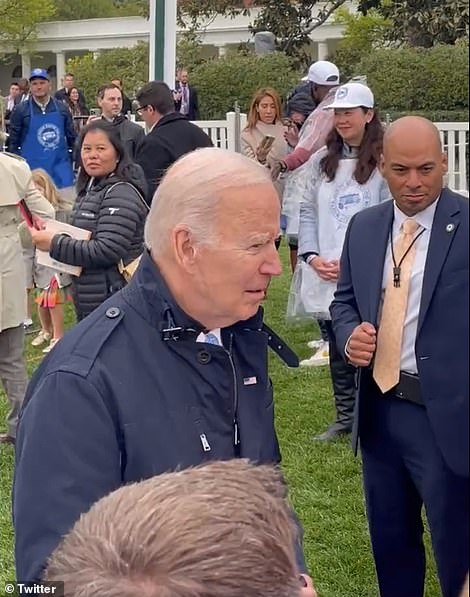 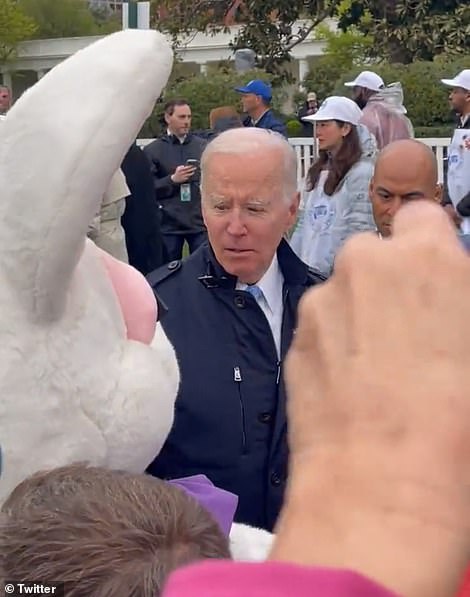 In another angle, the president can be heard saying something about Pakistan and Afghanistan when the Easter Bunny interrupts him 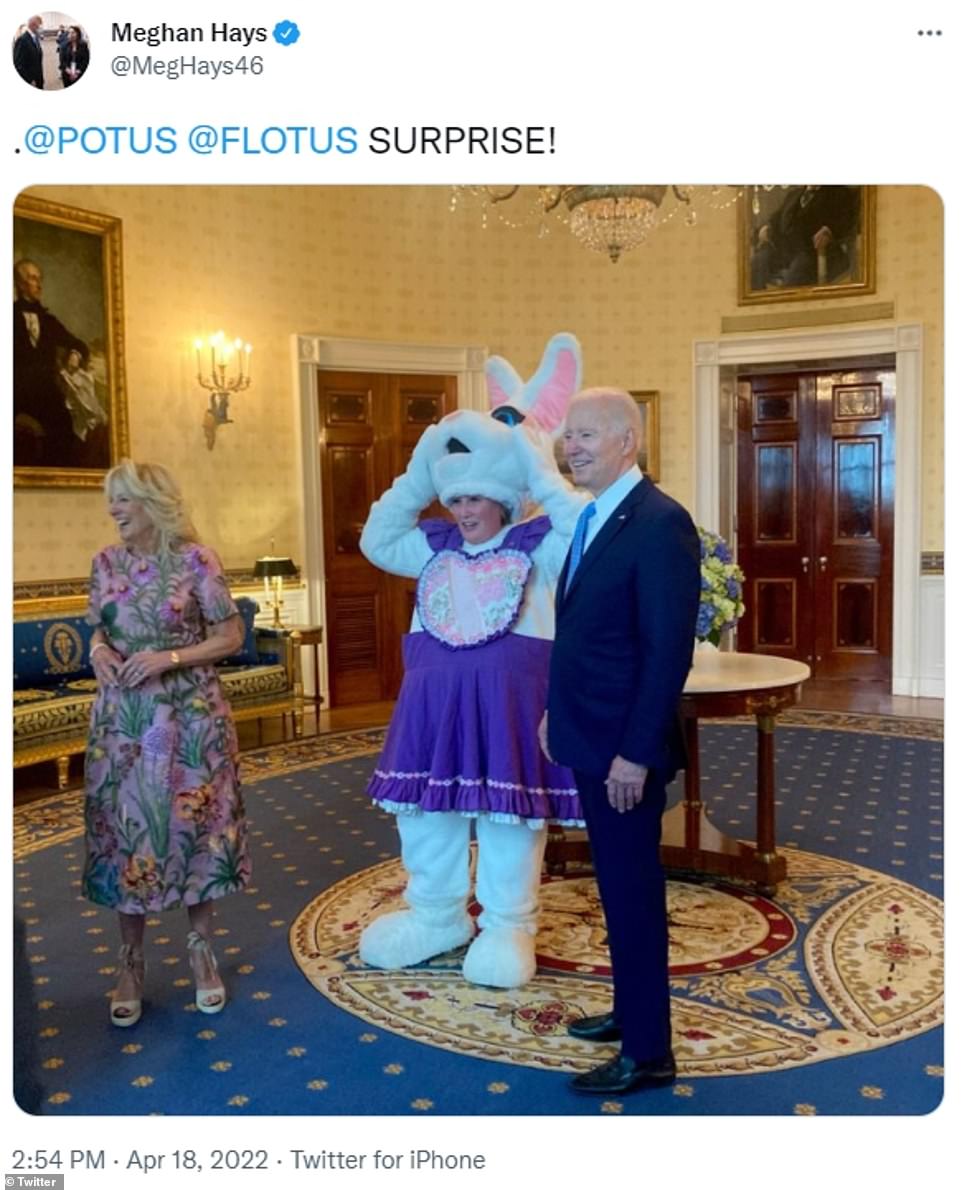 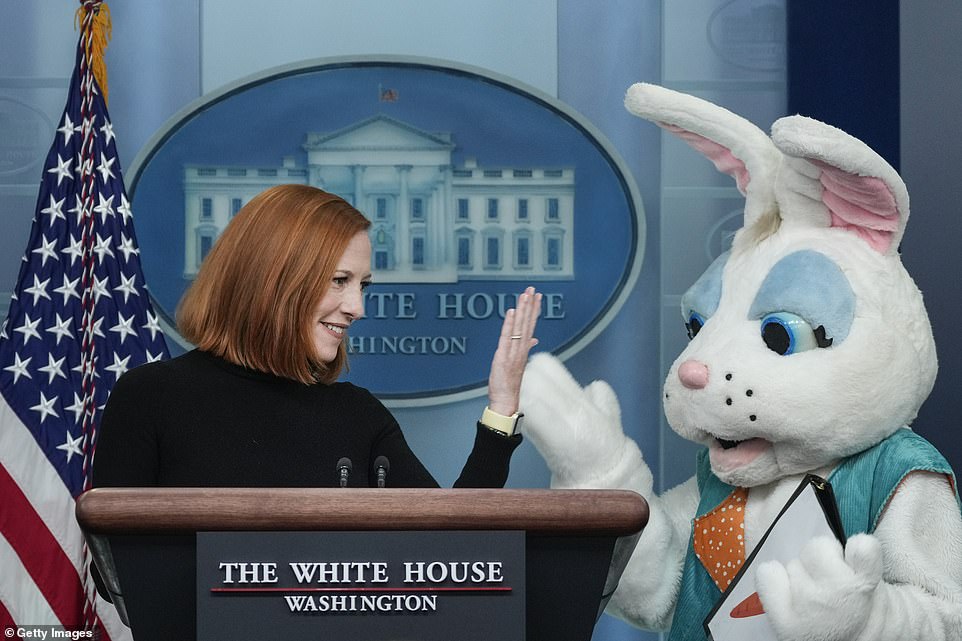 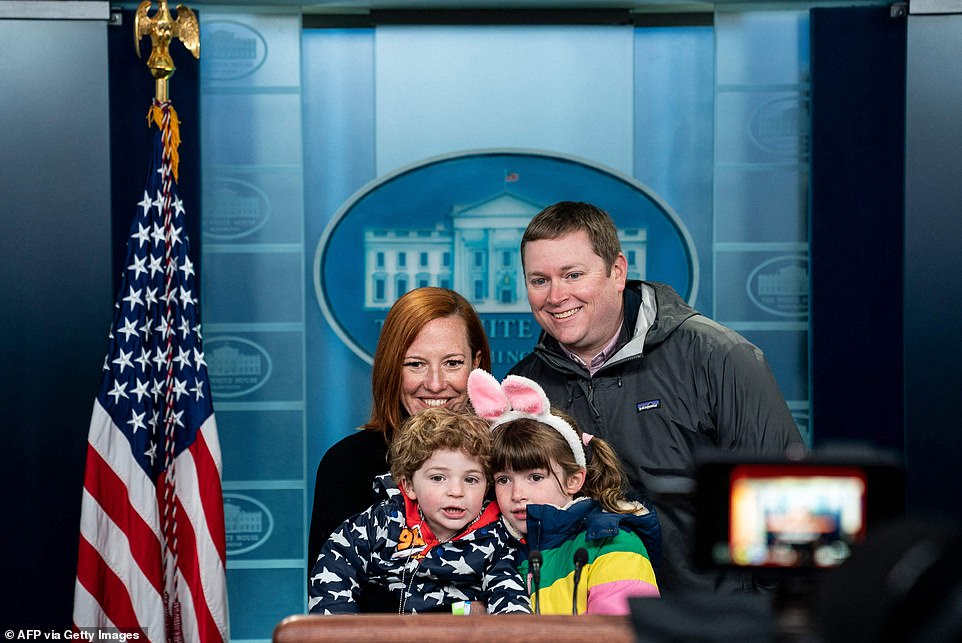 Psaki poses for a photo alongside her husband, the political adviser Gregory Mecher, and their two children 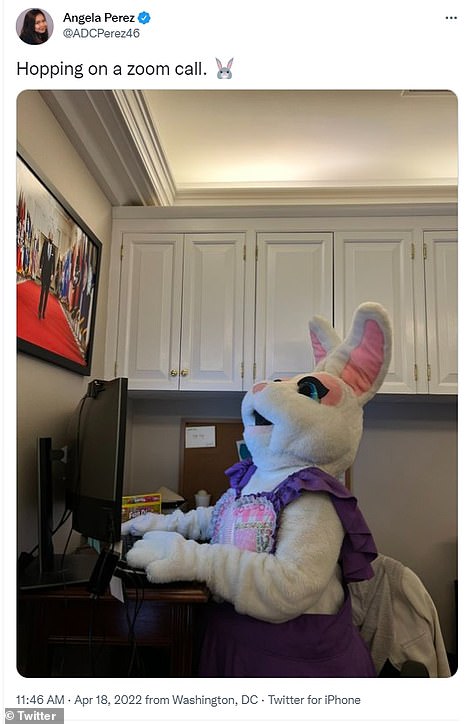 Senator Josh Hawley’s press secretary Abigail Marone wrote, ‘Why is the Easter Bunny directing the President of the United States.’

Former California House candidate Buzz Patterson also commented: ‘Some staffer in a bunny outfit interrupts the most important person in the world. Only in Biden’s America.’

‘The absolute distrust and disrespect our President’s staff has for him and his capabilities to lead and speak in public is disgraceful,’ McCain said on Twitter.

‘Shame on his team, shame on them. Why are they treating him like this? Because all this does is alarm the American public watching this.’

The president and first lady Jill Biden welcomed children to a rainy White House on Monday for some egg-citement – the first Easter Egg Roll of their tenure.

Among the crowd were family members including first son Hunter Biden, his wife Melissa and baby Beau, along with first daughter Ashley and grand-daughter Natalie.

‘The joy, the laughter, and the occasional – at least with my young grandson, who’s only two – the occasional, ‘There’s the Easter Bunny’ – a little startled sometimes. But the joy and the laughter is something that has been a wonderful tradition here at the White House for a long, long time,’ the president said, bringing up baby Beau. 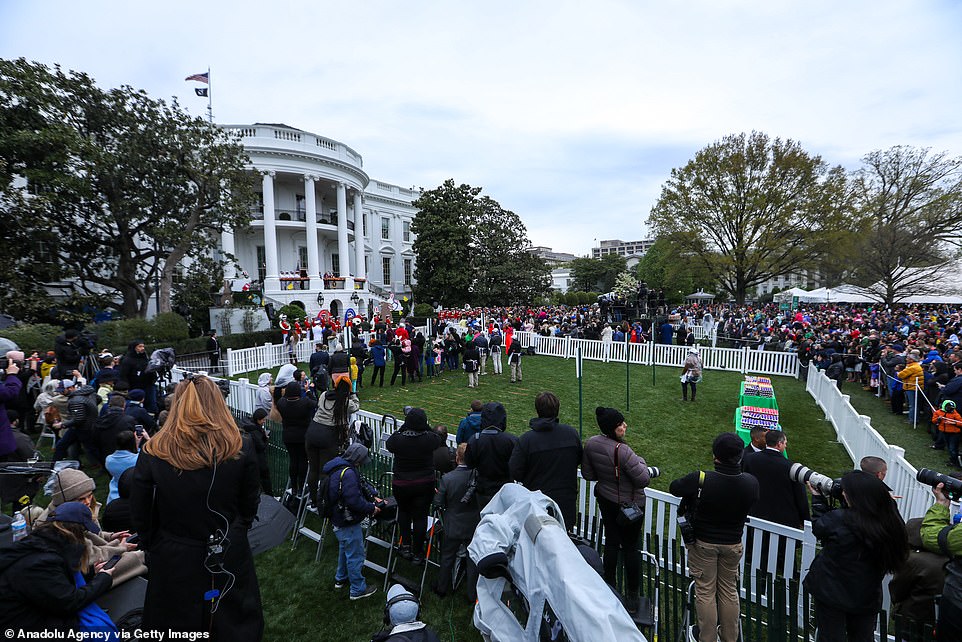 The first couple expected to welcome some 30,000 kids and adults for the traditional rolling and hunting eggs 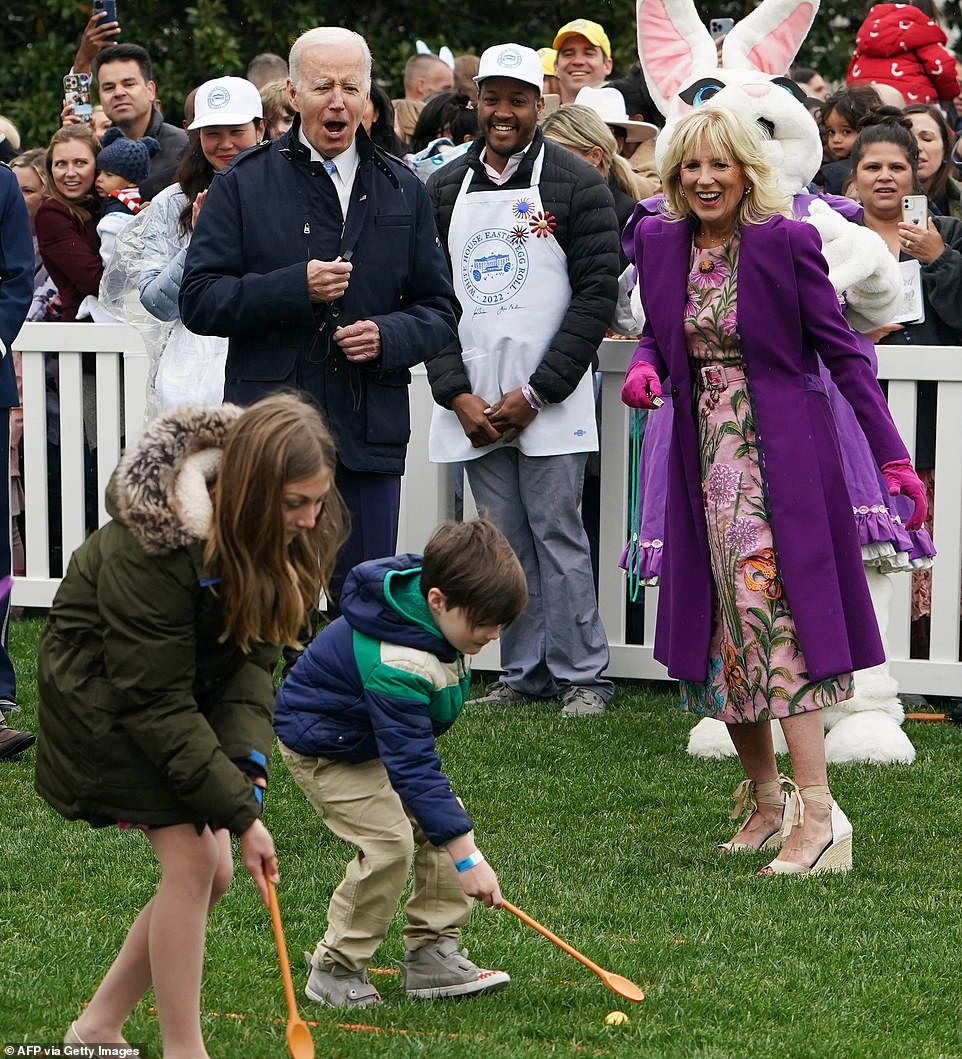 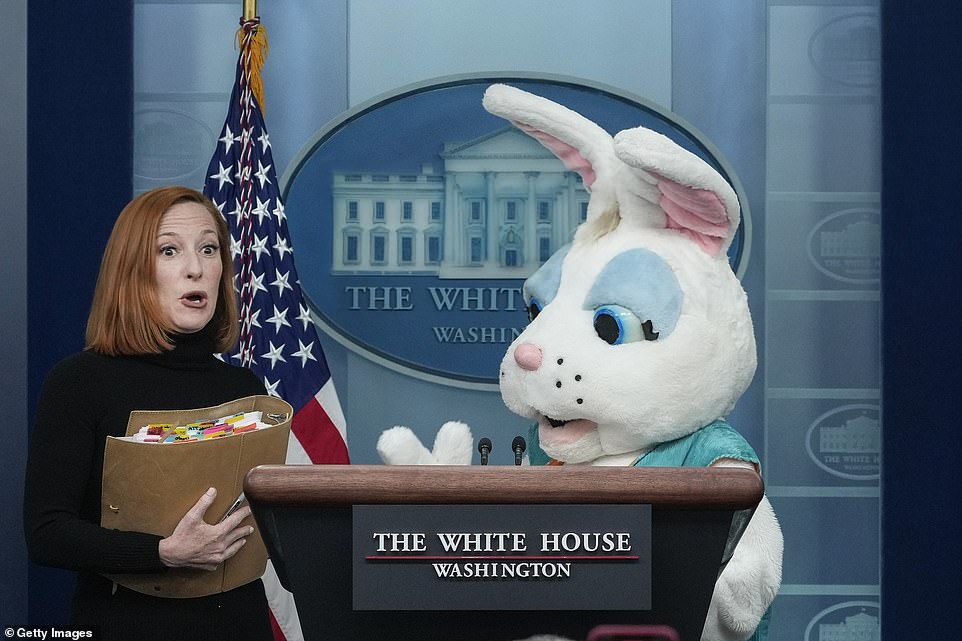 ‘Welcome to your house. The people’s house. Happy Easter!’ Dr. Biden told the crowd before introducing her husband.

It was 46 degrees and drizzling when the Bidens walked out on the Truman Balcony, flanked by two Easter bunnies.

The annual Easter Egg Roll returns to the White House after a two-year absence due to the COVID pandemic.

The first lady, a community college professor, gave the event an education theme – or ‘EGGucation’ as she called it.

‘Education never stops. The determined spirit of education is what we wanted to honor in this Easter Egg Roll. So, we turned the South Lawn into a school community,’ she told the crowd Monday. 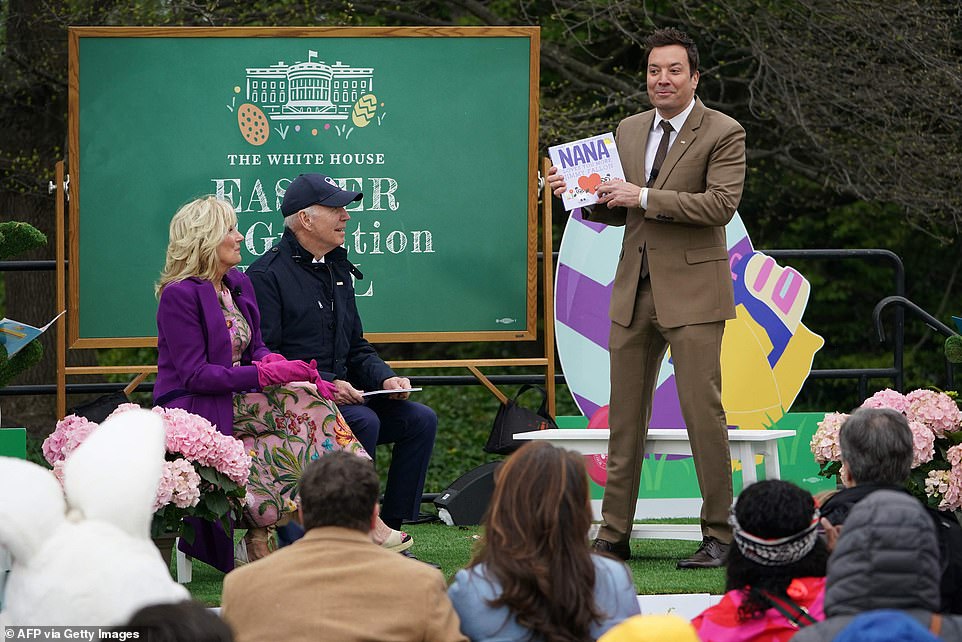 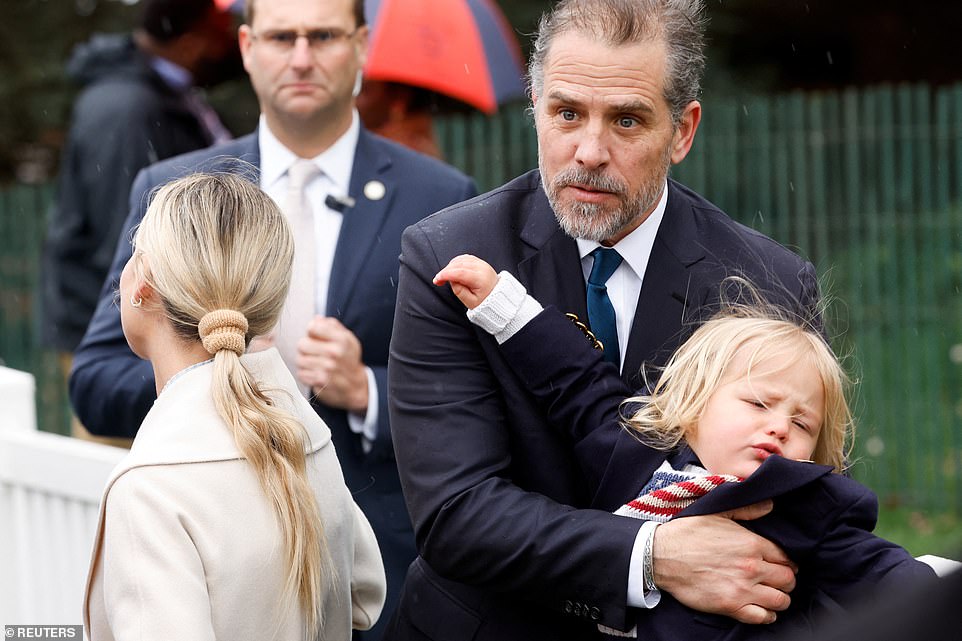 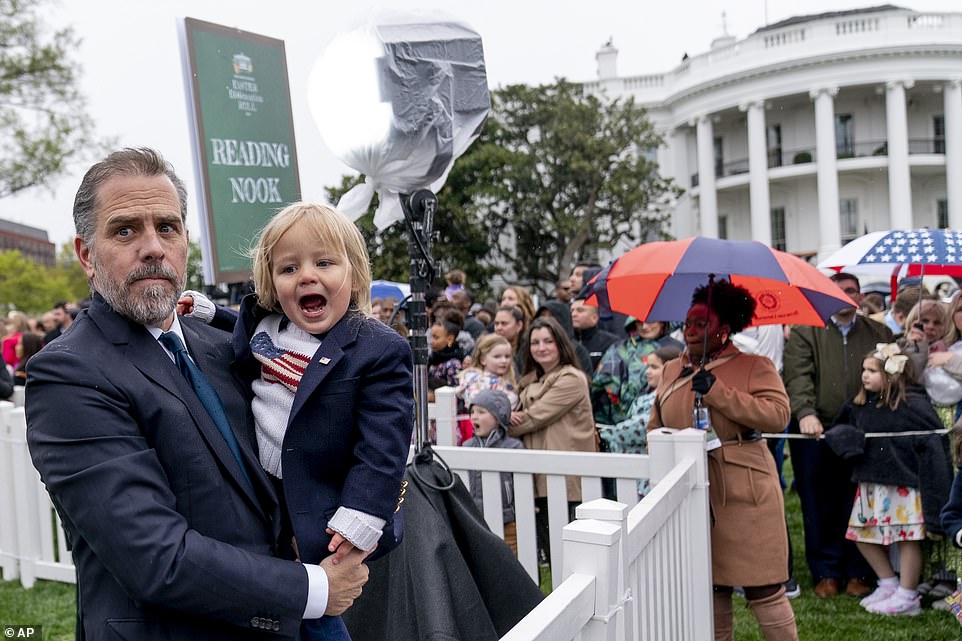 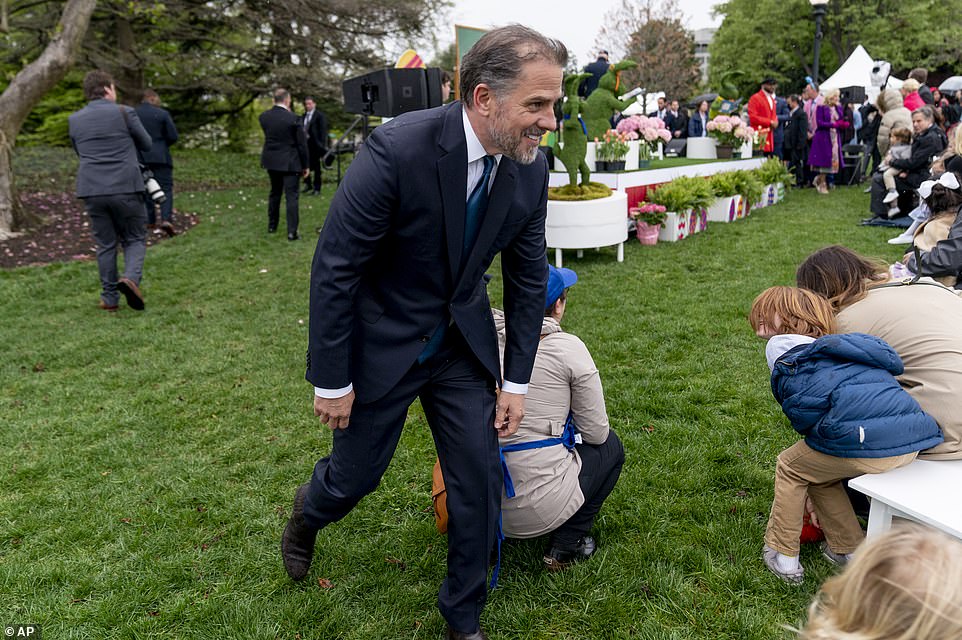 She and the president expected to welcome some 30,000 kids and adults for the traditional rolling and hunting eggs.

‘For generations, presidents and first ladies and kids, just like you, celebrated the Easter Egg Roll together — racing and making crafts, reading books, and, of course, meeting the Easter Bunny,’ the first lady also said.

In keeping with the education theme, this year’s event will feature a School House Activity Area, Reading Nook, Talent Show, Field Trip to the Farm, Picture Day, and a Physical ‘EGGucation’ Zone.

The first family spent the holiday weekend at Camp David while staff prepared the South Lawn for event.

Chenoweth was reading a story about a rescue dog at the Reading Nook, while Fallon mingled on the South Lawn driveway, taking in the president and first lady’s remarks. 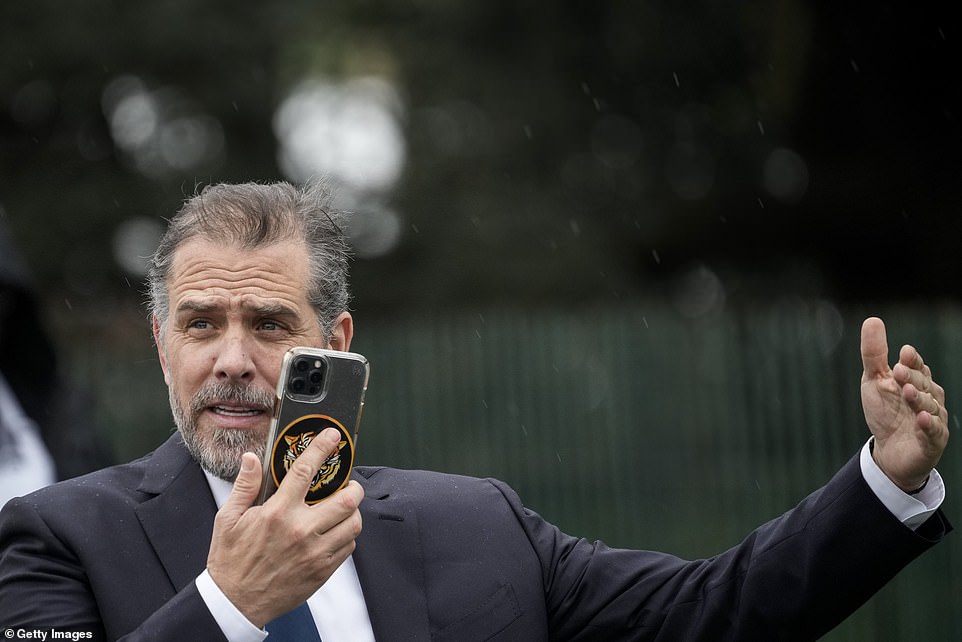 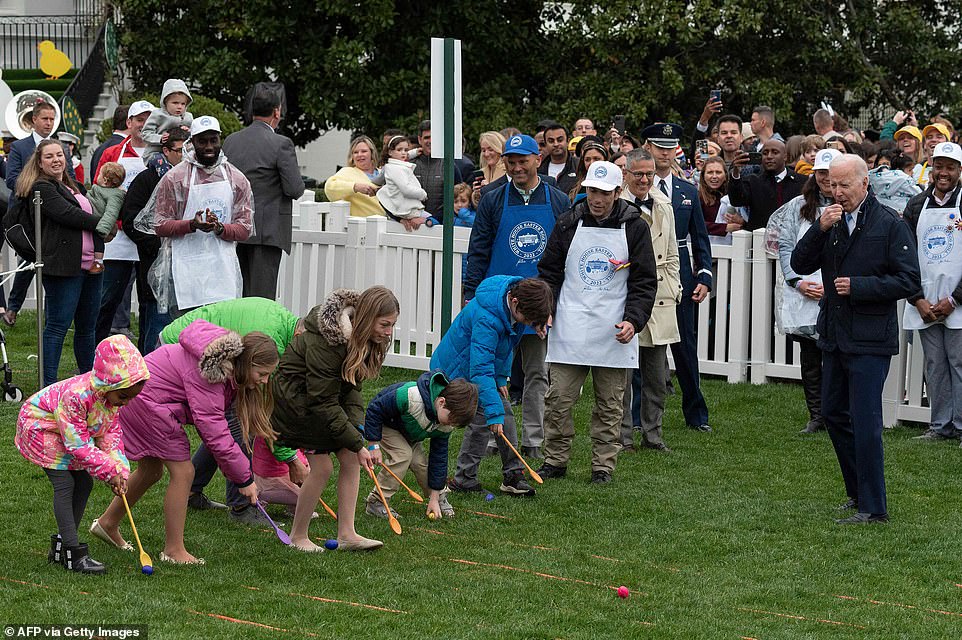 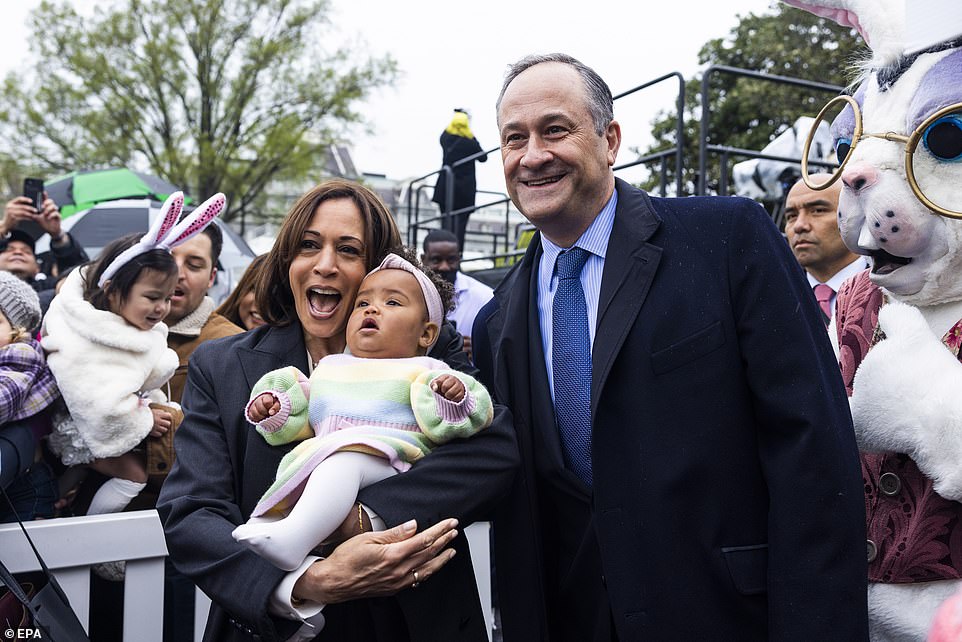 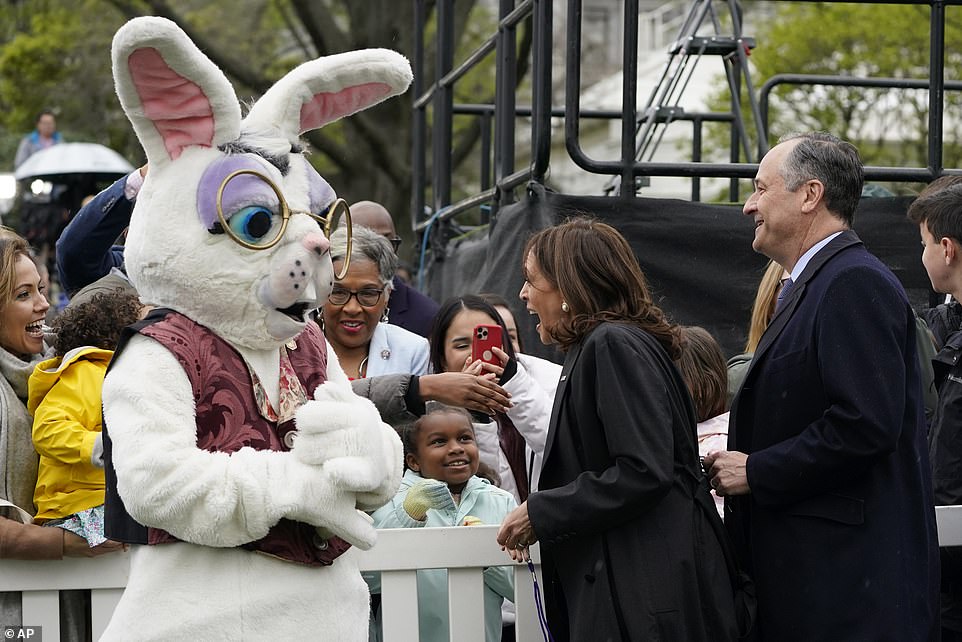