Earth’s glaciers have shrunk by 267billion tonnes per year since 2000 – accounting for up to 21 per cent of rising global sea levels, a new study has warned.

Researchers in France have analysed high resolution maps of over 200,000 glaciers from the past two decades to understand how they have changed.

Worryingly, their analysis suggests that glacier mass loss has been accelerating at 48 billion tonnes per year each decade since 2000.

In the study, the researchers, led by Romain Hugonnet, said: ‘By uncovering the patterns of mass change in many regions, we find contrasting glacier fluctuations that agree with the decadal variability in precipitation and temperature.’ 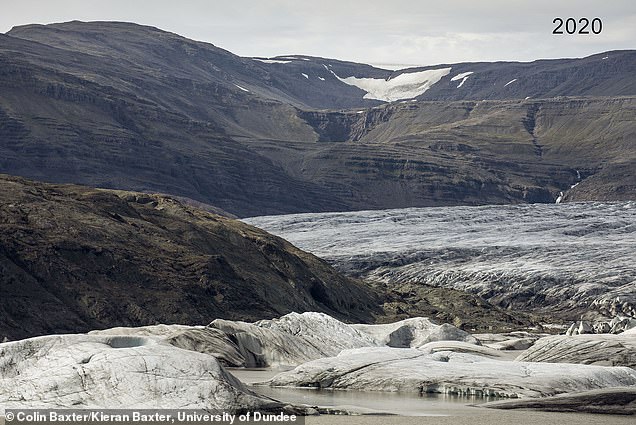 Earth’s glaciers have shrunk by 267billion tonnes per year since 2000 – accounting for up to 21 per cent of rising global sea levels, a new study has warned. Pictured: Iceland’s Hoffellsjökull glacier in 1989 and in 2020

In particular, the researchers identified seven regions that accounted for 83 per cent of the glacier mass loss:

– The Greenland Periphery (13 per cent)

– Antarctic and Subantarctic (eight per cent)

– The Southern Andes (eight per cent)

In the study, the team from the University of Toulouse analysed high resolution maps of 217,175 glaciers – nearly all the glaciers in the world.

This included satellite and aerial imagery, which revealed mass changes of individual glaciers.

The team then estimated the change in surface elevation of the 217,175 glaciers from 2000 to 2019, excluding ice sheets.

By cross-referencing their estimates with available high-precision measurements, the researchers were then able to calculate the volume and mass change of the glaciers.

Worryingly, their calculations indicate that between 2000 and 2019, glaciers lost a total of 267 gigatonnes of ice per year, accounting for 21 per cent of sea-level rise.

In a statement, the researchers said: ‘Glacier mass loss has been accelerating at 48 gigatonnes per year each decade since 2000, which could explain 6–19 per cent of the observed acceleration of sea-level rise.’

In particular, the researchers identified seven regions that accounted for 83 per cent of the glacier mass loss. 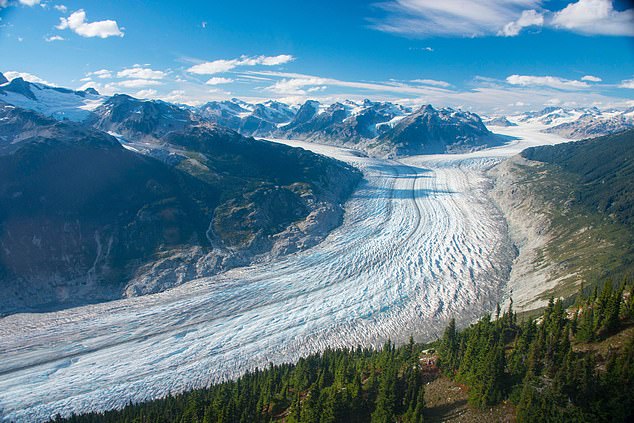 Earth’s glaciers have shrunk by a whopping 267billion tonnes in the past 20 years, accounting for up to 21 per cent of rising sea levels, a new study has warned. Pictured: Klinaklini Glacier, the largest glacier of Western Canada 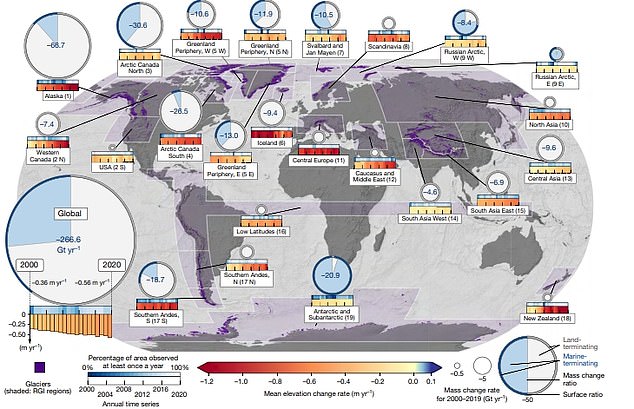 In the study, the team from the University of Toulouse analysed high resolution maps of 217,175 glaciers – nearly all the glaciers in the world. This included satellite and aerial imagery, which revealed mass changes of individual glaciers

In contrast, only two regions were found to experience a slowdown of glacier thinning over the past 20 years.

‘The record thinning rates of Icelandic glaciers during 2000–2004 were nearly halved during 2015–2019, which coincides with the decelerated thinning of Scandinavian glaciers,’ the team explained. 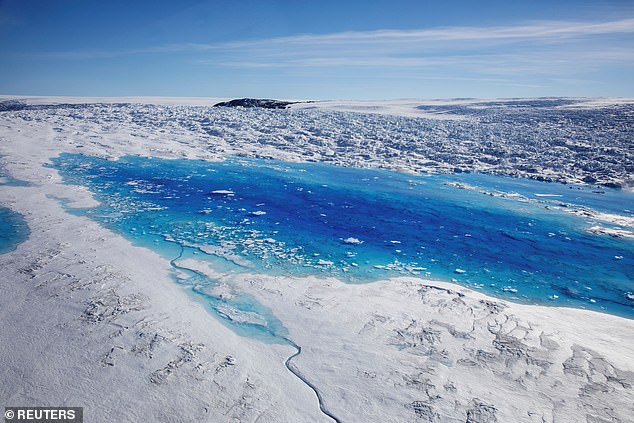 Meltwater pools are seen on top of the Helheim glacier near Tasiilaq, Greenland on June 19, 2018

Rising sea levels could have important implications for people living in coastal towns, as well as wildlife who rely on sea ice.

According to the study, about 200 million people live on land that is predicted to fall below the high-tide lines of rising sea levels by the end of the century.

Meanwhile, one billion people could face water shortage and food insecurity within the next three decades.

The team wrote: ‘Understanding present-day and future glacier mass change is crucial to avoid water-scarcity-induced sociopolitical instability, to predict the alteration of coastal areas due to sea-level rise, and to assess the impacts on ecosystems and cryosphere-related hazards.’

‘Understanding how glaciers melt over time, and how this modifies regional hydrology and contributes to rising sea levels, can help to improve models that predict future changes and could inform strategies to manage water resources and mitigate sea-level rises,’ they added.

Commenting on the findings, Andrew Shepherd, professor of Earth observation at the University of Leeds, who was not involved in the study, said: ‘Glacier melting accounts for a quarter of Earth’s ice loss over the satellite era, and the changes taking place are disrupting water supplies for billions of people downstream, especially in years of drought when meltwater becomes a critical source.

‘Although the rate of glacier melting has increased steadily, the pace has been dwarfed by the accelerating ice losses from the Antarctica and Greenland, and they remain our primary concern for future sea level rise.’