Police Community Support Officer Andy Pope, 43, boasts a photographic memory which means he can recall faces from CCTV images years after he has seen them.

His incredible skill has seen him collar suspects for crimes which range from robbery, indecent exposure, sex assaults and attempted murder since 2012.

Community support officer Andy Pope, 43, from Redditch, Worcestershire, has been hailed the ‘memory man’ by his colleagues after recognising 2,100 suspects since 2012

The super recogniser, who works for West Midlands Police, says his skill is ‘impossible to explain’ but credits ‘instinct’ for usually being right

The officer, from Redditch, Worcestershire, has now sailed past the 2,000 milestone during 2020, when he managed to snare over a hundred suspects.

He even identified wanted criminals who were wearing masks during the pandemic, saying he kept relying on his instinct, despite face coverings making them harder to identify. 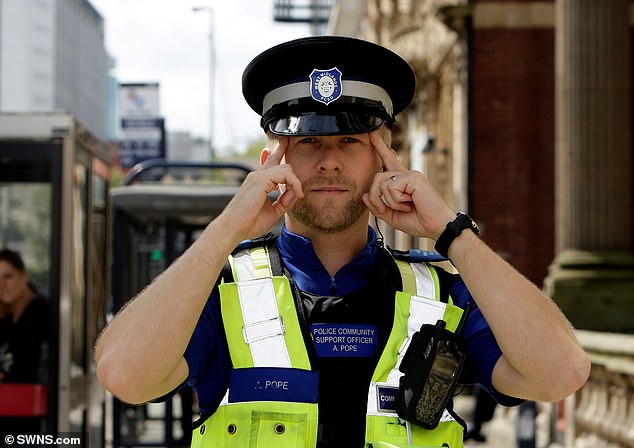 The super recogniser, who works for West Midlands Police, says his skill is ‘impossible to explain’ but credits ‘instinct’ for usually being right

He said: ‘Although it’s been a year like no other, I’ve still carried on as usual with the same preparation coming onto a shift.

‘I’ve made sure I’m fully updated on the images of people wanted by the force, and it’s paid off.’

Mr Pope added: ‘I’ve even been able to spot some in Birmingham city centre while they’ve been wearing face coverings.

‘I have been asked many times how, but it’s impossible to explain. It’s just an instinct that is the person and thankfully it’s proven right.

‘The most important thing is being able to assist in catching criminals and keeping the public safe, especially given the year it has been.’

What are super recognisers?

The term super recognisers was first coined in 2009 by Harvard University for people with significantly better-than-average face recognition ability.

Super recognisers are able to memorise and recall thousands of faces, often having seen them only once.

It is estimated that 1 to 2% of the population are super recognisers who can remember 80% of faces they have seen.

The skill is recognised and employed among the British intelligence community and in May 2015 the Metropolitan Police officially formed a team made up of people with this heightened capability.

They have an uncanny ability to recognise faces, remembering people they have not seen for decades, who have substantially changed in appearance, and who they have only fleetingly encountered.

Super recognisers might assist with the matching of faces captured on CCTV footage, the comparison of faces to identification documents, or the scanning of crowds for known troublemakers, wanted perpetrators or even missing persons.

They may also help with victim identification, or deciding whether a person moving between borders is using a fraudulent identity or is even a missing child.

Popular tests assess participants’ ability to recognise photographs of celebrities that were taken a long time before they became famous.

His skill also led to the officer being a finalist in the Against All Odds category of the Amplifon Awards For Brave Britons 2020.

He has previously been presented with the Chief Constable’s award after catching an average of 200 suspected crooks every year.

He also became one of the first 20 people in the world to form part of the Super Recognisers Association in recognition for his razor-sharp ability.

The officer stores more faces year-on-year and averages one recognition every other shift.

It has previously led him to identify a male robber he had seen an image of a year before and another by the mole on their face.

Andy added: ‘If you look at a picture enough times, there is usually something that sticks in the mind as distinctive.

‘Maybe I can’t pinpoint what that something is at the time, but when I see the person in the flesh, it triggers that recognition.’

His job for the force’s Safer Travel Partnership entails travelling around the region on public transport, with his skills used to assist other departments.

His frequent travel also increases his chances of encountering suspects whose images he has seen on the police computer.

He said: ‘It is hard to explain exactly how I remember so many faces.

‘I spend time before I start a shift looking at some of the latest wanted faces and they just seem to stick in my mind.’

He added: ‘I feel a great sense of pride and satisfaction if I manage to remember a suspect from an image who is then arrested.

‘Hopefully, there will be many more to come in future.

‘I am just pleased I can contribute and hopefully there will be many more crime suspects I can spot in future.’

Inspector Rachel Crump, from the Safer Travel Partnership, said: ‘Andy has a remarkable ability and various departments across the force have benefitted from his razor-sharp memory.’