Holland has diagnosed a record 6,500 cases in the last 24 hours, after the country’s Government warned it would be forced to impose tighter restrictions by the end of the weekend if infections did not start to drop.

Officials issued the ultimatum to 17million Dutch citizens yesterday after shrugging off enforcement of face mask rules since the pandemic began and overseeing a dismally failing testing system.

The country became a global virus hotspot on Friday. Its infection rate has surged to 160 cases per 100,000 people.

It is far ahead of England’s 59 per 100,000. But experts warn that the UK nation may be fast catching up, with delays in swabbing concealing the accelerating spread. 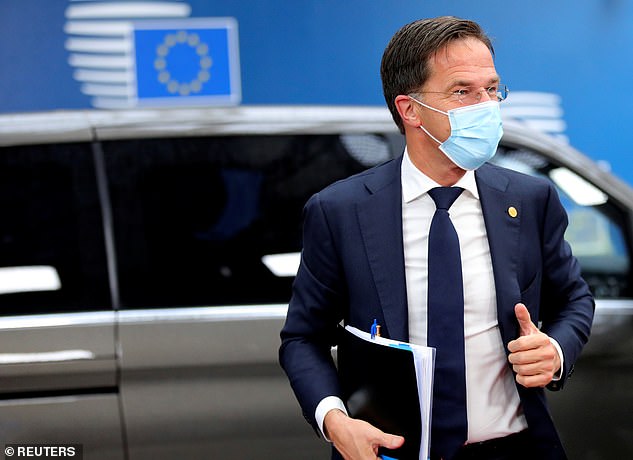 Italy orders compulsory testing on travellers from the UK and Netherlands

Italy has ordered compulsory coronavirus tests for all travellers from the UK, the Netherlands, Belgium and the Czech Republic.

The move comes as the European nations battle to contain a growing surge of infections during the coronavirus second wave.

Rome also made it compulsory to wear face masks outdoors across the country as new infections jumped to the highest daily tally since April.

The decree was approved at a cabinet meeting on Wednesday after a steady increase in cases over the last two months.

Several Italian regions including Lazio, around the capital Rome, had already made face masks mandatory.

The cabinet on Wednesday also approved a decree to extend the state of emergency until January 31, making it easier for ministers to take swift action.

Italy yesterday saw more than 5,000 new cases for the first time since April, having not even seen as many as 3,000 for five months until Wednesday.

Dutch infections reported on Saturday are 64 per cent higher than Saturday last week, when 3,900 were diagnosed.

With most of Europe at peak infection levels, it is important to note that testing in the first wave has been dwarfed by that taking place in this ‘second wave’ of the pandemic.

Dutch Prime Minister Mark Rutte warned yesterday there was a ‘very real’ risk of stricter measures being introduced, blaming it on ‘the sum total of us disobeying the basic rules’.

‘If it doesn’t improve in the next few days, then we won’t escape it,’ he said. ‘The next 72 hours are important.’

‘Regardless of what we should or should not do next week, we will at least come up with a road map with a plan for future measures like they use in Ireland.’

The Dutch parliament debated giving the Government the power to make the use of face masks mandatory in public places on Wednesday, as the country recorded 5,000 new infections.

Prime Minister Rutte has repeatedly said he has no intention of imposing the measure – which the World Health Organisation calls one of the key tools to stop the spread of the virus.

His top medical official has publicly repeated his assertion that their usefulness is unproven.

After the first wave of infections waned in May, the Netherlands worked to boost testing capacity, promising they would be available to all.

The strategy was to find hot-spots fast, and isolate people quickly to stop contagion.

Laboratories said they had increased capacity by two-thirds to 51,000 tests per day.

But last month, tests were again limited to people with serious health issues, and Rutte acknowledged capacity was far below demand.

‘There is a shortage of tests, while Germany has more than enough to even test people without symptoms.’

Germany has also seen a surge in infections but has so far kept the weekly rise to around 20 per 100,000. But it has a much bigger testing capacity. 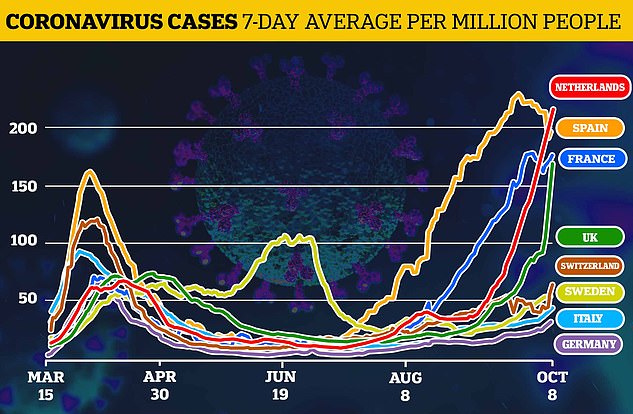 In the last month, a surge in new cases has catapulted Holland’s per capita infection rate into the top 10 in the world, with a weekly infection rate of around 160 per 100,000 population

Face masks have been mandatory in German shops since the summer, whereas the Dutch government only decided only last week to advise their use in indoor public spaces.

The UK has made face masks mandatory in places where the two-metre social distancing rule cannot be maintained. This includes public transport, shops and supermarkets and bars, cafes and restaurants except when eating or drinking.

Police officers are able to issue a £200 fine when someone is found breaching the rules, this then doubles each time up to a total £6,400.

But spiralling infection rates are still being recorded – forcing tighter lockdown restrictions on 50 regions of the country.

The Government is expected to unveil a simplified ‘three-tier’ lockdown system on Monday to curb the rising tide of infections.