We might have guessed that when Dustin Johnson finally won the Masters he would do so smashing all sorts of records.

The prodigiously gifted 36-year-old American showed his brittle side on the front nine to keep things interesting, before blowing everyone away over the best back nine in golf.

A week that began with all the talk about beefcake Bryson DeChambeau had ended in triumph for the best all-round athlete in the sport. 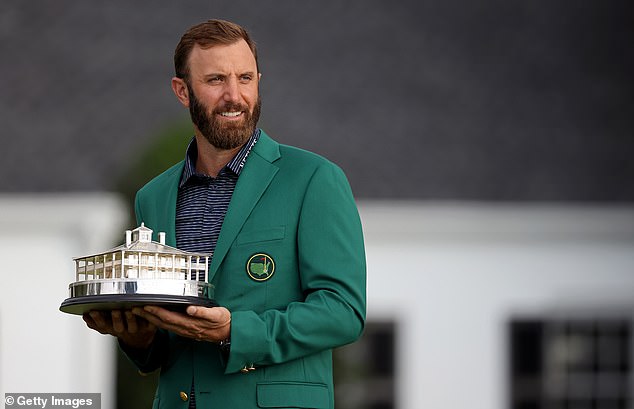 The American world No 1 shot an incredible 20 under par at Augusta, finishing five shots clear 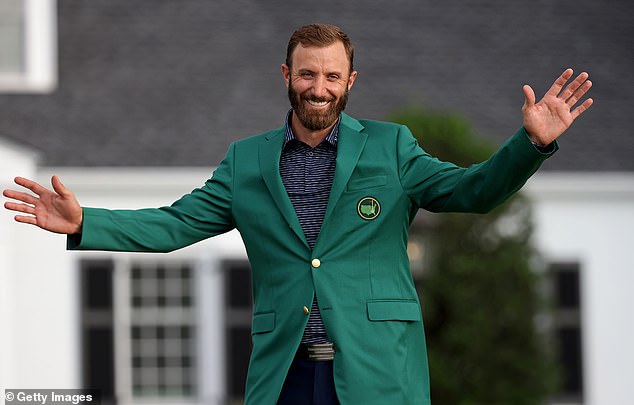 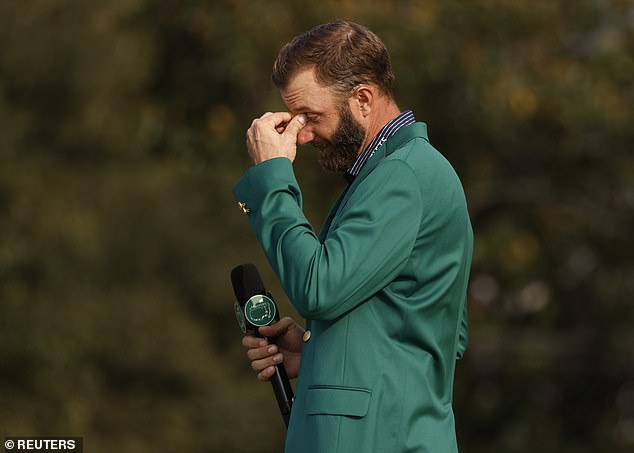 Johnson, who was born just an hour away from Augusta in South Carolina, shot a final round 68 for a 20-under total that lowered by two shots the all-time 72-hole record set by Jordan Spieth in 2015. It equalled the record in any major, set by Jason Day at the 2015 USPGA and matched by Henrik Stenson in winning the Open at Royal Troon the following year.

What made Johnson’s victory particularly impressive was the way he regrouped after a plainly jittery start. He was just two shots ahead of the feisty Australian Cameron Smith with nine holes to play — the moment where they say the Masters really begins.

A classic duel looked about to unfold between the man whose long game stats were off the charts against the pugnacious Queenslander leading the chipping and putting categories.

Johnson was having none of that. Emerging with safe pars from the trinity of dangerous holes to open the back nine, he turned on the afterburners with three birdies in a row. Game over, although credit the likeable Smith, who achieved a bitter-sweet piece of history of his own. Fancy becoming the first man ever to shoot four rounds in the sixties at the Masters — and still not winning. 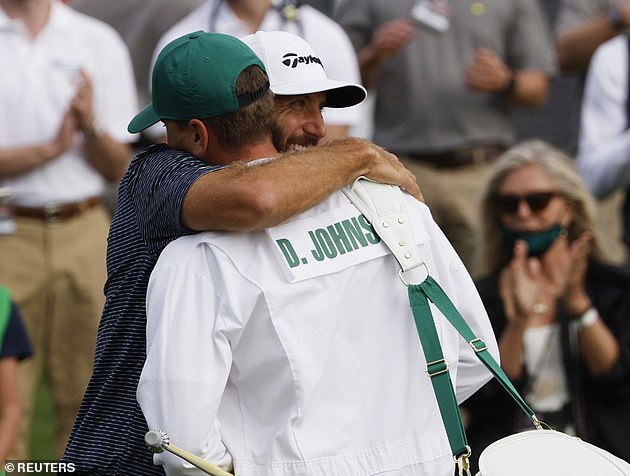 Johnson hugs his brother and caddie, Austin, following his incredible triumph at the Masters 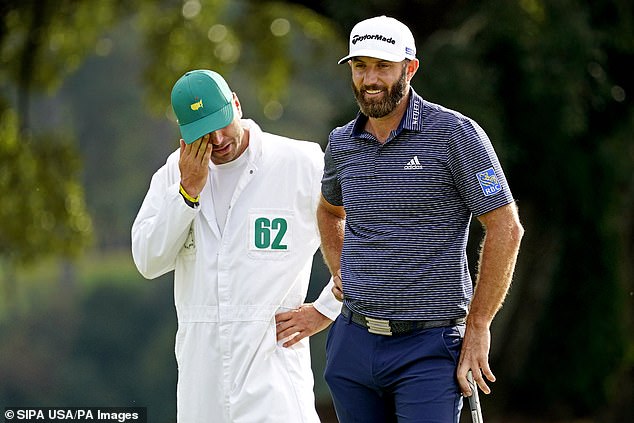 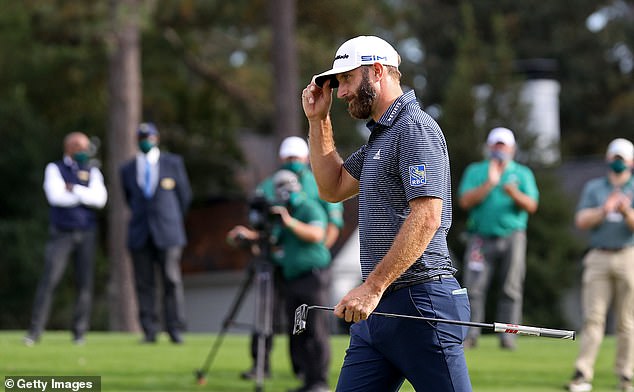 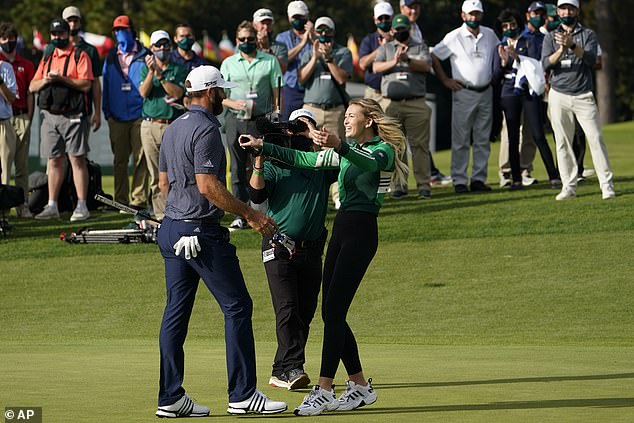 Credit as well to the Korean Im Sung-jae, who finished joint runner-up at the age of only 22 with a fine finish.

This, though, was Johnson’s time, after all the heartache. He remains the only man in history to blow his first four 54-hole leads in majors but rendered that stat redundant with this fabulous riposte in his fifth.

The winning margin was five strokes and the only other men to win by so many in the last 40 years were Sir Nick Faldo in 1996 and Tiger Woods the following year.

Adding the green jacket to his 2016 US Open win, Johnson finished with just four bogeys for the week and yet another record — the lowest amount achieved by a Masters champion. Not only has he got the flair, he’s now learned to eliminate the mistakes.

There’s a lesson in that for Rory McIlroy, who finished in a tie for fifth. He followed up that horrendous first round 75 with scores of 66, 67 and 69.

‘It looks to me like he’s gone from trying to force it on Thursday to thinking, “To heck with it, let’s go and play” and allowing it to happen,’ said three-time Masters champion Faldo. 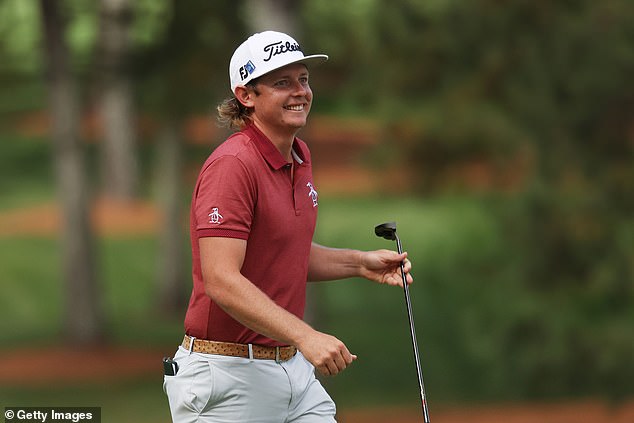 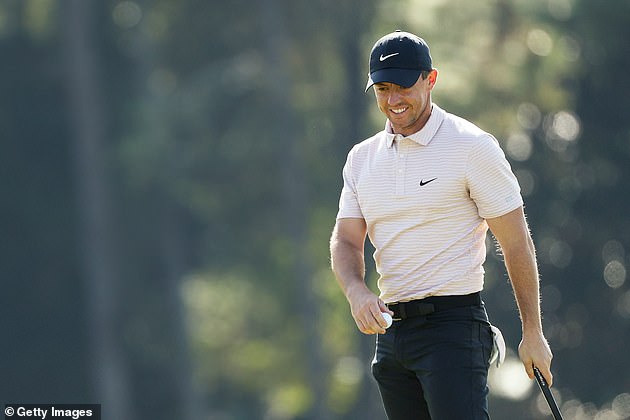 It was certainly a gutsy response. McIlroy gave a glimpse afterwards into the ‘stress and anxiety’ he feels each April trying to complete the career Grand Slam.

‘Each time I lose between 10 and 15lbs over the course of the week,’ said the man who looks like he’s got no weight to lose.

There to greet Johnson as he came off the 18th green was his fiancee Paulina — daughter of ice hockey’s greatest name, Wayne Gretzky — and former Masters champions Bubba Watson, Zach Johnson and Spieth.

‘Welcome to the club,’ they chorused. ‘Always wanted to join’ said the local boy, as his brother and caddy Austin dissolved into tears.

What a contrast it all was to the early holes and Johnson’s brutal attack of nerves. The man who never missed a fairway on Saturday found a fairway bunker at the first and then the second cut of rough at the next.

The golfer who played seemingly without a care in his third round 65 needed a bathroom break just 30 minutes after teeing off. 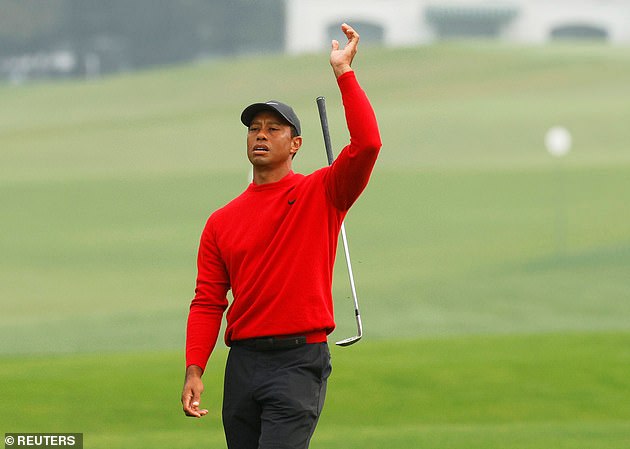 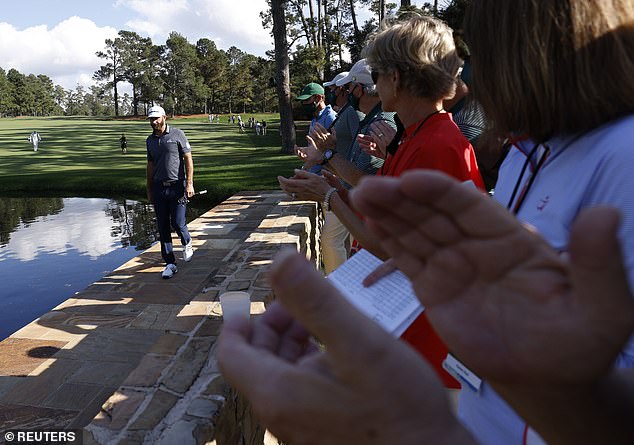 Johnson had eagled the second hole in both the first round and the third. This time, he stubbed a difficult pitch into one of the cavernous greenside bunkers, but at least had the presence of mind to play a fine recovery for par. You would have thought a birdie at the third, where he holed a 12ft putt, would have settled him. There was even a little fist pump from the man who rarely shows emotion.

At the difficult par-three fourth, however, he hit his tee shot so fat it didn’t sound like a Johnson iron blow at all. It led to his first bogey all week on the front nine and, wouldn’t you know it, he followed it with another at the fifth.

Clearly, Johnson needed a crisp iron shot on the next par three, the sixth, if the final day wasn’t to prove to be like so many for him in the majors. He delivered it and holed the short birdie putt.

Thereafter, he clearly started to relax. He started finding fairways. He started holing putts. He showed why he is, by a distance, the best golfer in the world.

The first reigning world No 1 to win the Masters since Tiger in 2002. Appropriately, it was defending champion Woods who helped him into his green jacket.

What a week. DeChambeau ended up getting beaten by 63-year-old Bernhard Langer, the oldest man to make the halfway cut. The best player walked off with the ultimate prize. This one-off November Masters ended up as the winter warmer we always hoped for.

TAKE A LOOK BACK AT ALL THE LIVE ACTION RIGHT HERE….