Dustin Johnson has made the turn in the final round of the Masters with a two-shot lead over Cameron Smith.

Johnson stumbled a bit in the middle of the front nine, making back-to-back bogeys at the fourth and fifth holes. That broke a stretch of 33 consecutive holes without a bogey going back to the second round.

With his lead down to one shot, Johnson bounced back with a birdie at the par-3 sixth. He added another at the eighth and went to the back side with a 1-under 35 on the day, pushing his overall score to 17 under.

Johnson is trying to capture his second major championship. He won the 2016 U.S. Open at Oakmont, but he’s also failed to win four times with a 54-hole lead in a major.

He came into the final round at Augusta with a four-stroke lead over Smith, Sungjae Im and Abraham Ancer. Im remains four shots back, while Ancer has dropped eight strokes off the pace.

WATCH: Johnson leads pack at 16-under entering final round: 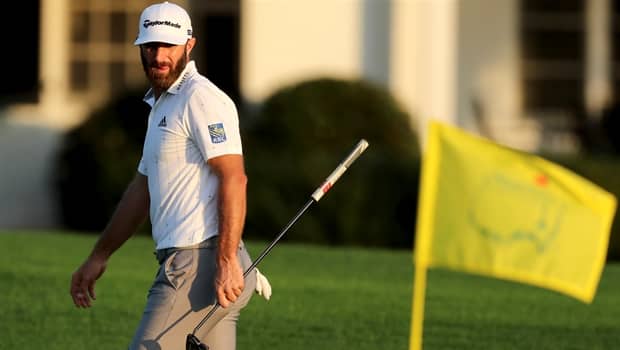 Bernhard Langer has wrapped up a remarkable performance for the ages at Augusta National.

After becoming the oldest player to make the cut in the Masters, the 63-year-old German closed with a 1-under 71 to finish at 3-under overall.

Even though Langer ranked last among the 60 weekend players in driving average (260 yards), his experience and touch around the greens allowed him to finish ahead of plenty of younger players.

One of those Langer beat was Bryson DeChambeau, the longest hitter on the PGA Tour and the betting favourite coming into the week. They played together on Sunday, with DeChambeau shooting a 73 to finish one stroke behind Langer.