Dunelm has seen profits jump to record levels as high online demand for its homewares continued beyond lockdown – and sales have held up despite the cost of living squeeze.

Pre-tax profits at the home furnishings retailer surged by just under a third to £209million in the 52 weeks to 2 July, even though the cost-of-living crisis began to increasingly strain Britons’ household finances.

Dunelm’s total sales increased by 16.2 per cent to £1.55billion, aided by the addition of an extra summer sale event and market share gains in both homewares and furniture.

But despite its strong performance, the retailer has joined other lockdown winner stocks in seeing its share price slump, with Dunelm shares down 50 per cent over the past year.

Growth: Pre-tax profits at Dunelm Group surged by just under a third to £209million in the 52 weeks to 2 July, while total sales increased by 16.2 per cent to £1.55billion

The FTSE 250 company said there had been strong interest in its winter warm and garden furniture seasonal ranges, as well as its new collaboration with the Natural History Museum.

It also benefited from a weaker comparative period the previous year, when its stores could only offer a click-and-collect service for much of the time because of strict Covid-19 regulations.

Digital sales slumped by £71million due to the absence of shop closures, yet they still represented 35 per cent of the group’s total turnover and were around two-and-a-half times above pre-pandemic levels.

Dunelm Group shares rose 2.1 per cent to 738p during early morning trading, although their value has plunged by more than half in the past 12 months, as rising costs have made investors concerned about the UK retail sector.

Dunelm’s operating costs grew by 11.3 per cent to £581.8million last year, partly through giving its 11,000 staff a 7 per cent pay hike in recognition of higher inflation.

Additional cost increases came from the reintroduction of business rates, the repayment of furlough money, and the decision to enhance stock volumes to combat supply chain disruptions. 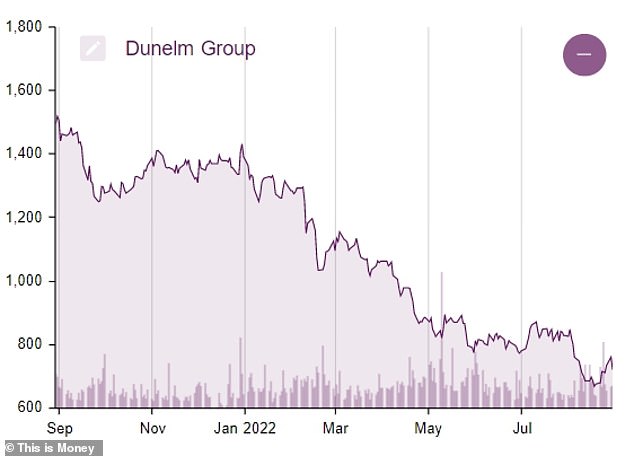 Long-term decline: Dunelm Group shares have plunged by more than half in the past 12 months as rising costs have made investors concerned about the UK retail sector

Chief executive Nick Wilkinson acknowledged the operating environment was ‘very challenging’ but said the company was ‘confident and well prepared to weather the current economic pressures.

‘We emerged from an unprecedented global pandemic as a bigger, better business, and we believe we have the tools in place to do that again.’

He added: ‘In this environment, we have to make every pound count, both for ourselves through our tight operational grip and cost discipline, and for our customers, through our offer of outstanding value at all price points.’

Dunelm was a major pandemic winner thanks to the stamp duty holiday, cheap mortgage rates and Britons’ desire to improve their homes boosting demand for homeware products.

Though its share price has fallen back as inflation has begun to bite, the company said sales for the first ten weeks of the current fiscal year had ‘remained robust’, and it was on track to hit analysts’ forecasts.

However, AJ Bell investment director Russ Mould warned: ‘Even Dunelm can’t change the economic weather, and it seems likely sales will eventually suffer as people wait a bit longer to replace that duvet set or pair of curtains.

‘As the retailer desperately tries to make ‘every pound count’, to use the language of chief executive Nick Wilkinson, doing what it can to keep a lid on costs and offer customers value, there may be some confidence that it can emerge from the storm a stronger business.’