The Duchess of Cornwall has said listening to the ‘horrific’ stories of domestic abuse survivors motivated her to help tackle the ‘taboo’ around discussing the issue.

In a virtual summit for the Women Of The World (Wow) online festival, Camilla, 72, said she wanted to ‘lift the shroud of silence’.

Camilla said she knew of both men and women who had suffered, and that speaking with them left her ‘more and more shocked by what was going on’.

The duchess said: ‘It’s been a taboo subject for so long that people just haven’t talked about it.

‘As I’ve said before, silence is corrosive because it leaves the victims feeling both shame and blame.

During the virtual summit Camilla said: ‘I just want all these people to know that they are not alone and that there is help there. There’s help out there.’

‘I wanted to lift the shroud of this silence, and get more women, children and men to talk about their experiences.’

She said that domestic abuse is ‘such a traumatic experience that I think it becomes sort of locked into a compartment inside them and it’s very difficult to find the key to unlocking.

‘The more people, the more brave women I’ve seen getting up and speaking about their experiences, it inspires others.

‘I think once they’ve heard somebody talk about it, they think “ah., well maybe I could do that too”.’

The duchess also said she was ‘proud’ to be announced as patron of the domestic abuse charity SafeLives, an appointment that was announced during the summit.

She recalled attending a charity meeting at SafeLives earlier this year, when she listened to women’s experiences of domestic abuse after which ‘there wasn’t a dry eye in the place’.

‘The experience was so moving,’ the duchess said, adding: ‘That was the moment when I thought ‘goodness, I’ve got to do something to help these people’.

‘I remember talking to one of the mothers who’d lost her daughter in the most horrific circumstances and I said “look, I don’t know what I can do to help but I promise I’m going to do everything I can try and bring this out into the open”.’ 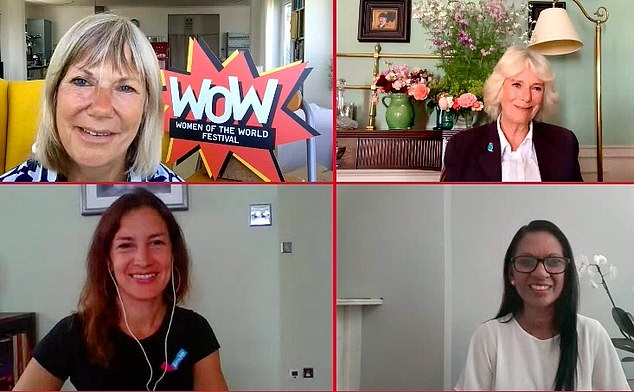 She added: ‘It can affect anybody… from any strata of society, it doesn’t matter who you are.

‘I just want all these people to know that they are not alone and that there is help there. There’s help out there.’

The duchess also expressed fear that the coronavirus pandemic would have a ‘horrific’ impact on domestic abuse.

Suzanne Jacob, chief executive at SafeLives, also took part in the discussion and warned that the full impact of the pandemic was still unknown. 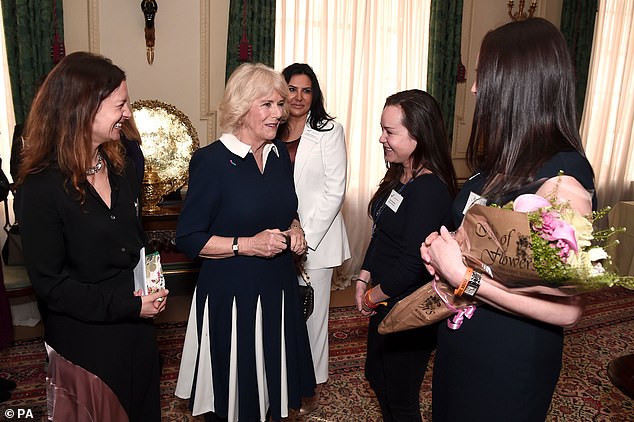 She said: ‘The full picture is probably not going to emerge for quite some time to come.

‘We know that people have slipped out of view even more than usual during lockdown, and that’s children as well as adults, which is a really frightening prospect.’

The Duchess of Cornwall said she became particularly motivated to address the problem later in life after meeting women while on official royal duties.

‘I’m in my 70s now, so I grew up in a time, in the ’50s and ’60s, when the landscape and the attitudes were very different,’ she said during the video, which was streamed online Saturday evening.

‘A huge amount has changed since then, particularly for women.

‘I think then I didn’t really notice it so much, because it was just part of the lifestyle.’

The duchess said she had since listened to ‘countless women’ all over the world.

‘It made me see at first hand the inequalities that disproportionately still affect women and girls.

‘And this was particularly apparent in the areas of domestic abuse and sexual assault, two issues that I care very deeply about.’

The duchess said progress was being made and called for the issue of domestic abuse to be more openly discussed, with more training of volunteers and teaching of young people about ‘healthy and loving relationships’.

‘Whatever happens I’m going to keep banging the drum until people listen to me, until there’s a hole in it,’ she vowed.

The 24-hour online festival hosted by Wow, which Camilla is the president of, gathered contributors from around the world, including civil rights activist Angela Davis, campaigner Gina Miller and actor Sir Patrick Stewart.

They discussed issues impacted girls and women, including education, justice, climate, health, the economy and violence, as well as the coronavirus pandemic. 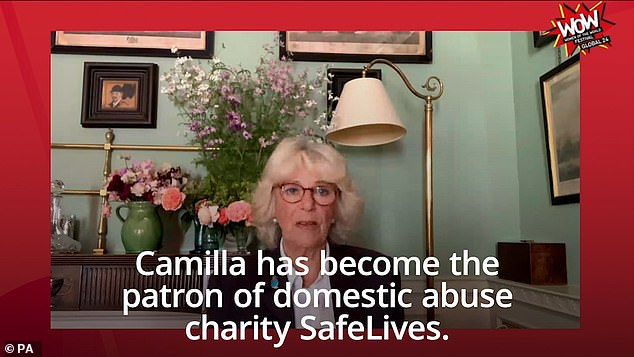 In an exclusive interview with the Daily Mail yesterday, Camilla expressed fears over the true extent that domestic abuse was being experienced during lockdown.

She told the paper: ‘Can you imagine being locked up with somebody who is abusing you, probably with children, in a very, very small flat somewhere? How do you escape?

‘You probably can’t get to a phone, you can’t talk to anybody, if you go out people aren’t going to want you rushing into their house because they are in lockdown.

‘It must have been absolutely horrific. Completely trapped. Victims will have felt they just had to put up with it.’