EXCLUSIVE: The Duchess of Cambridge’s uncle Gary Goldsmith tells Harry and Meghan to ‘shut the F up’ as he brands them ‘muppets craving attention’ and says prince has lost ‘all our respect’ after ‘structural racism in Britain’ speech

By Claudia Joseph for MailOnline

The Duchess of Cambridge’s uncle has criticised the Duke and Duchess of Sussex for interfering in British politics from the other side of the Atlantic.

And he pleaded with them to ‘shut the F up’ and let Britons get on with ‘saving lives’ and the ‘economy’.

In a post on Linked In, he wrote: ‘With so much stuff going on in the world still these two muppets are craving attention!

Speaking in a Zoom interview with the Evening Standard from their new £11million home in Santa Barbara, California, the couple said they were ‘doing well’ after leaving the UK 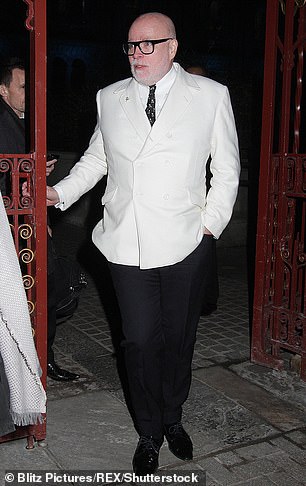 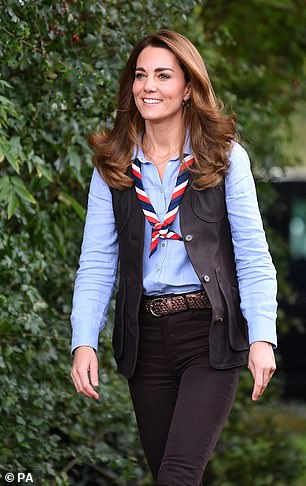 Kate’s uncle Gary, currently self-isolating after holidaying in Ibiza, spoke out after the speech 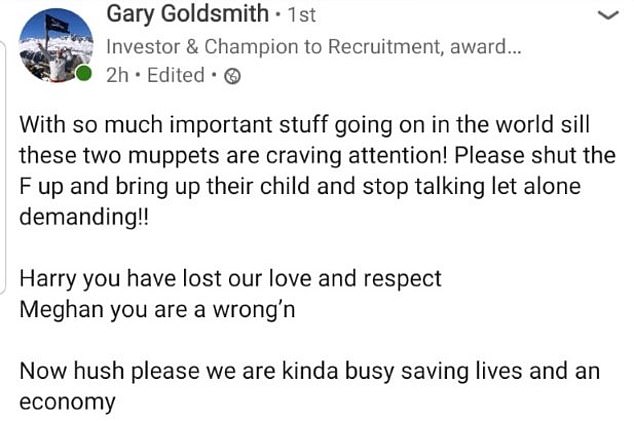 Gary Goldsmith, who is the brother of Kate’s mother Carole Middleton, pleaded with Prince Harry and Meghan Markle to ‘shut the F up’ and let Britons get on with ‘saving lives’

‘Please shut the F up and bring up your child. Stop talking and being so demanding!!

‘Harry, you have lost our love and respect. Meghan you are a wrong’n. Now hush please we are kinda busy saving lives and the economy.’

Gary, 55, who is currently self-isolating after holidaying in Ibiza, spoke out after the Duchess lost her latest High Court battle with the Mail on Sunday.

She is suing Associated Newspapers over the publication of a ‘private and confidential’ letter sent to her father Thomas Markle.

She wanted to prevent the newspaper group from arguing that she had ‘co-operated with the authors of the recently-published book Finding Freedom’.

The final straw was when Goldsmith read an article on Mail online in which Harry and Meghan demanded an end to ‘structural racism’ in Britain.

While Meghan praised the protests across the US as ‘a beautiful thing’, Harry admitted his white privilege.

‘I wasn’t aware of so many of the issues and so many of the problems within the UK and also globally as well,’ he said. ‘I thought I did but I didn’t.

‘You know, when you go in to a shop with your children and you only see white dolls, do you even think: ‘That’s weird, there is not a black doll there?’.

‘And I use that as just one example of where we as white people don’t always have the awareness of what it must be like for someone else of a different coloured skin, of a black skin, to be in the same situation as we are where the world that we know has been created by white people for white people.’

However Goldsmith, who lives in London with his wife Julie-Ann, believes that the couple should stop preaching to Britain.

‘I totally stand by everything I wrote,’ said Gary, who attended his niece Kate Middleton’s marriage to Prince William.

‘I used to have a lot of respect for Harry and his army career but this new Harry is someone I don’t recognise.

‘I find it totally frustrating when we are trying to save lives and look after UK PLC, to be lectured daily on any topic they deem to be important.

‘They have abdicated the UK for the US and obviously don’t give a damn about the Royal family.

‘We’ve all had enough of them lecturing us. You can’t sell your soul to Netflix for a reported £150 million and then dictate to Mother England.’