Drug dealers are hit by covid as lockdown disrupts their supply chains with three in ten users claiming prices have increased, survey says

Drug dealers have been hit by coronavirus after lockdown disrupted their supply chains with three in ten users claiming prices have increased, according to a survey.

The Global Drug Survey (GDS) found access to illegal drugs decreased in Britain between March and June in a poll of 1,173 people.

The study reported 29 per cent of Britons said drugs were more expensive, while 10 per cent said it took longer to acquire them and 19 per cent bought larger amounts.

Dozens of people being searched by police after a raid on an Amsterdam-style ‘cannabis cafe’ where drugs were sold for as little as £3 in Limehouse, east London, in August last year

It also found cannabis was one of the most difficult drugs to obtain, with 49 per cent of users reporting a reduced use due to the limited supply.

GDS’ chief executive, Professor Adam R Winstock, told The Times: ‘For drugs like MDMA and cocaine, there would have been a period of time where there was a reduced supply.

‘There would have been less international drug trade and less drugs coming into the UK.’

He added: ‘I can imagine that availability was also affected just because people would not necessarily have been able to go out and get their drugs.’

Despite the disruption to supply chains, drug offences in England and Wales still soared by 27 per cent during lockdown.

Data previously showed that thousands more crimes linked to banned substances were recorded by police between March 23 and May 25 than in the same nine-week period last year. 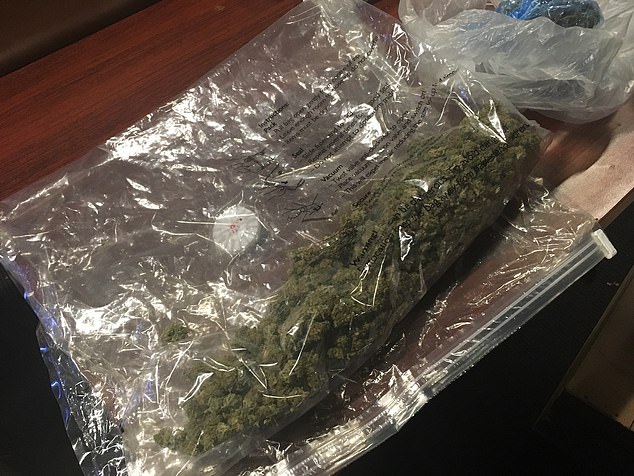 Cannabis worth up to £20,000 found by officers during a raid in east London last year. The study found 49 per cent of cannabis users reported a reduced use due to the limited supply

Met Police said that drug dealers adapted to the lockdown and started home deliveries, but this made them more visible and vulnerable to arrest.

In total, 26 forces that responded recorded a total of 25,665 drugs offences, including trafficking and possession, between March 23 and May 25 this year, compared with 20,220 in the same period in 2019.

There was also a rise of 11 per cent compared with the number of recorded offences between January 20 and March 23 this year.

There were 23,113 drug crimes recorded between January 20 and March 23 this year.

The latest total national figures for all crime reported by the National Police Chiefs’ Council showed a 25 per cent drop in England and Wales in the four-week period to May 10.