Car owners are being offered the chance to get their catalytic converters marked to deter thieves and help police identify stolen property.

Security firm SmartWater has announced the first ever national initiative, backed by the police, in order to tackle catalytic converter theft.

Instances of the crime peaked in March last year with 3,245 recorded in the UK that month. Despite thefts initially declining after the spring, they are now on the rise again.

Covert markings added to catalytic converters log them to a national database with a unique ID number meaning they can be identified and traced if they are stolen.

In March this year 2,254 catalytic converters were reported stolen, up 11 per cent from February when 2,025 were taken, according to the Centre For Infrastructure and Asset Protection, a division of SmartWater Group.

The uptick in thefts correlates to the increase in the price of metals because of Russia’s invasion of Ukraine. Russia is a key supplier of metals including aluminum and palladium. At the end of February, on the London Metal Exchange three-month aluminium prices soared above previous record highs.

Marking the devices records them on a national asset database, used by SmartWater and the police, ensuring that any marked catalytic converter, once recovered, can be identified and traced back to the specific vehicle it was taken from.

Robberies of the exhaust devices – which are made up of precious metals that are very valuable on the black market – have sky-rocketed in recent years as brazen criminal gangs have been hacking them from the underside of parked vehicles. 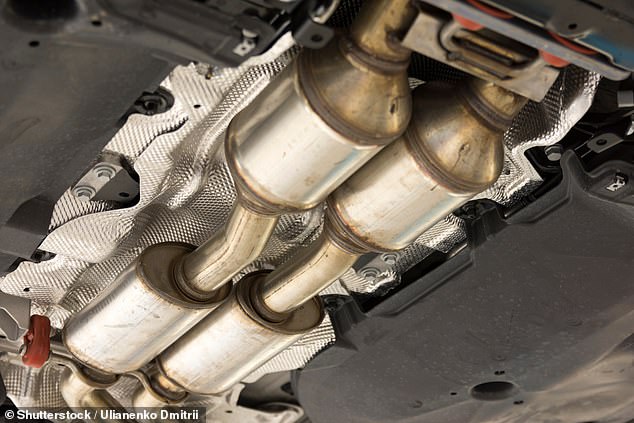 The recent rise in thefts of catalytic converters is thought to be related to the rise in metal prices resulting from Russia’s invasion of Ukraine as Russia is a key global supplier of metals.

It is hoped that MOT test stations, garages and dealerships will join the initiative, giving greater access to drivers.

The process of marking a converter is simple and can be added on to other services such as an MOT.

What is a catalytic converter are what makes them valuable? 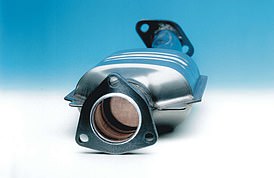 Catalytic converters – which are fitted to all petrol cars manufactured from 1993 – are there to reduce the level of harmful pollutants from being emitted from a vehicle’s exhaust pipes, writes Rob Hull for This is Money

The devices do this by taking the gases produced and converting them into water vapour and less harmful emissions via a series of chemical reactions.

They are made up of an array of valuable materials including palladium, rhodium and platinum – and criminal gangs are well aware of this small fortune stored beneath your vehicle.

Rhodium has seen its price soar in recent years and is far more valuable per ounce than gold.

With gangs likely to have regular buyers for the metals lined-up, it has simply become a case of sawing the devices off cars as quickly as possible to escape undetected.

With the vehicle on the ramp, SmartWaterHT, a special SmartWater high temperature product, is applied directly to the catalytic converter and the unique formula reference number is logged on the database against the vehicle registration number.

Deterrent labels are also attached to the vehicle, sending out a warning to would-be thieves.

The method of marking converters is far more effective than impressing the metal with serial numbers, which can be seen and easily removed by criminals.

The marking is almost impossible to remove and any attempt results in thieves’ clothing, tools and location being contaminated with incriminating evidence.

Thieves have been known to hack the converters off in broad daylight with the resulting damage sometimes costing thousands of pounds to repair.

In April 2021 the British Transport Police coordinated a multi-agency operation to tackle the thefts.

The scheme resulted in the recovery of over a thousand stolen catalytic converters and more than 50 people were arrested.

Gary Higgins, Chief Operations Officer at SmartWater said: ‘There is clear appetite within the UK automotive market for a simple and easy solution to combat vehicle crime.

‘SmartWaterHT is a highly-proven deterrent to criminals and rogue scrap metal dealers as it makes stolen parts too hot to handle. I believe that, together with the support of garages, service centres and the police, we can continue to drive down this crime and create a better and safer society for all.’

Superintendent Mark Cleland, British Transport Police and National Metal Crime Tactical Lead added: ‘Thanks to the support of the Home Office in creating the NICRP, our joint working with SmartWater and other industry partners, and the drive by enforcement partners across the UK, we have made a real impact in tackling metal and catalytic converter crime.’

‘It is the preventative approach through the forensic marking of catalytic converters that gives motorists the opportunity to protect their property and stop the crime in the first place.’

Any MOT, auto service centre or car dealership interested in being appointed as a Registration Centre should visit www.smartwater.com/join

– If possible, park in a locked garage or in a well-lit, densely populated area, writes Rob Hull for This is Money

– If you don’t have access to a garage, park close to fences, walls or kerbs with the exhaust being closest to the barrier; this will make the theft more difficult

– Consider a ‘cage clamp’ which locks around the converter

– If you see someone acting suspiciously under a vehicle, report it to the police