This is the bizarre moment a naked model bravely confronts a gun-wielding robber in her home, causing him to jump back in shock.

Model Danii Banks, 29, claims she was asleep in her bedroom when she was woken by her dogs barking during the night last week.

Fearing a home intruder, Banks is seen cautiously stepping into her living room to investigate with her naked bottom on show to the camera.

With no time to grab a gown, the Instagram star bares all as she demands to know what the robber is doing in her apartment in Chamblee, Georgia.

She claims the intruder, who she describes as a light-skinned black male, ordered her to open the safe in her home, which was empty.

He then pushed the model on to her bed and left without stealing anything, according to Banks.

The shocking footage was captured on a home surveillance camera intended to film her French bulldogs’ activities, she claims.

Chamblee Police Department who were called to the crime scene said that the victim’s front door had been forced open, reports TMZ.

Danii Banks, 29, the Instagram star, bares all as she demands to know what the robber is doing in her apartment in Chamblee 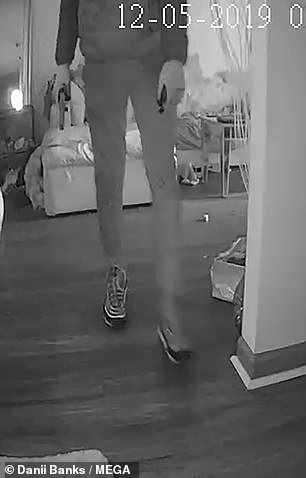 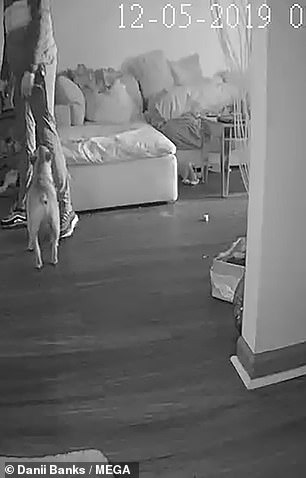 The intruder can be seen from the waist down on the surveillance camera intended to film the French bulldog’s activities. One of the dogs takes an interest in the burglar

Police said they found the model ‘hysterical and crying’ after the attempted robbery at gunpoint – no arrests have been made and an investigation is ongoing, reports TMZ.

Banks, famous for her curvy swimsuit pictures, has over 2.5 million followers on Instagram.

She took to the network on Wednesday to dismiss rumors that she had set up the home invasion to gain more followers. 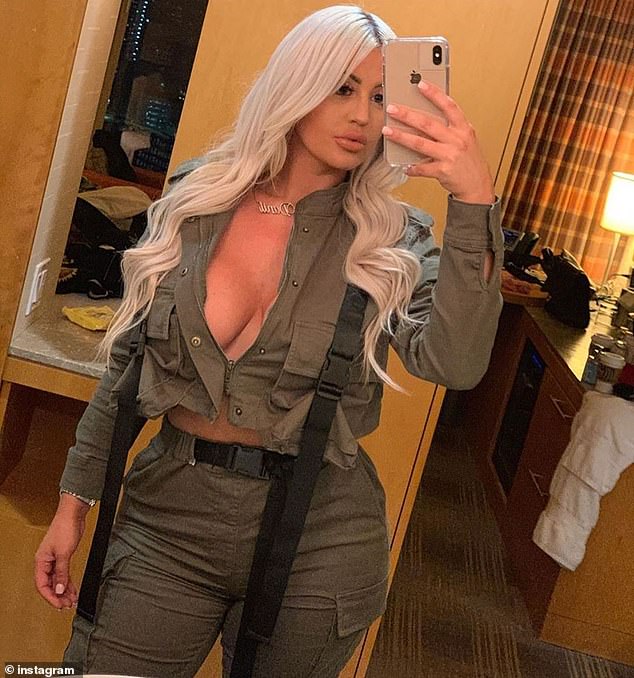 She wrote: ‘I woke up to my incident on TMZ. I have to say one thing. This world is a disgusting place.

‘For people to even say I could make this up or it was staged is a disgusting thing.

‘I want to thank everyone who has been there for me and this now has me in hopes that someone may recognize this man’s voice and come forward!!!! 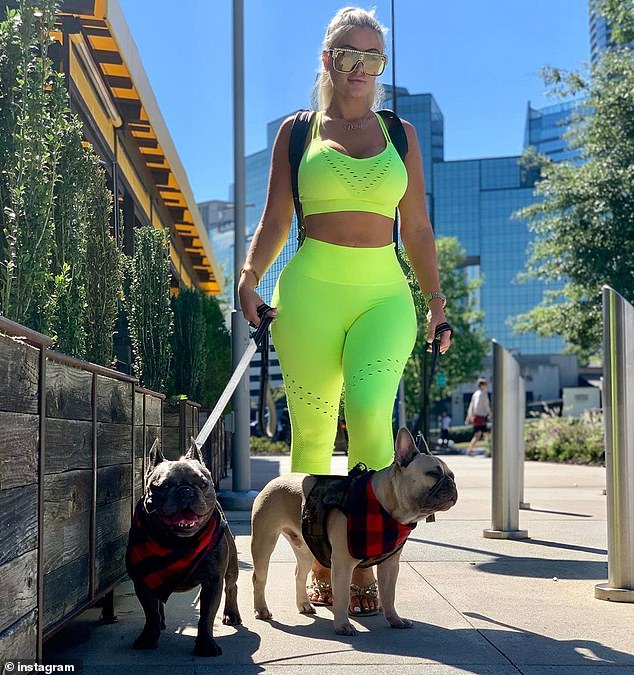 ‘And do what’s right so justice shall be served. I am thankful for my life.’

In the video, which doesn’t capture faces as it is angled downward, the man appears to be holding a shot gun.

She later posted: ‘It doesn’t take a rocket scientist to see I WAS SET UP. The person was tipped off on something I had in my home and he came for that.

‘He couldn’t find it and clearly why he didn’t take anything else that’s all he wanted. 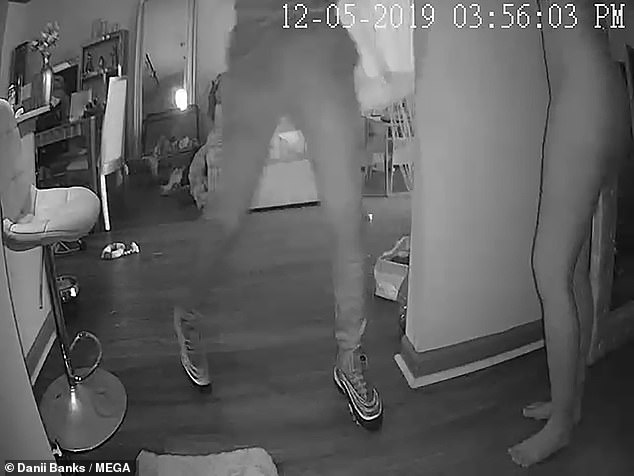 The naked model bravely confronts an a gun-wielding robber in her home, causing him to jump back in shock 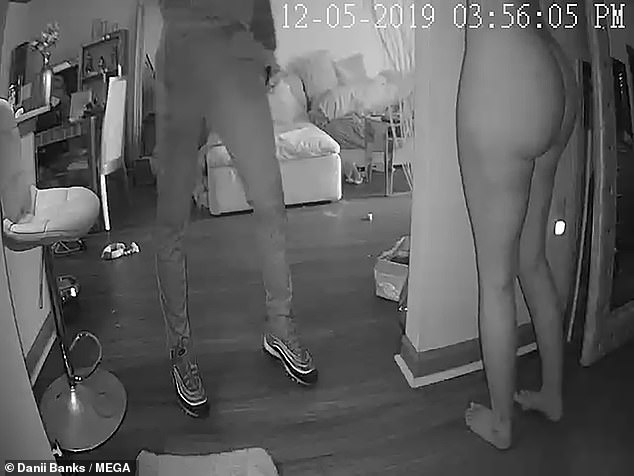 Banks demands to know ‘what are you doing?’ after he tells her ‘lay your a** down’

‘My apartment is small, when I heard a noise I jumped up to walk out and see wtf was happening.

‘I was sleeping naked which is NORMAL.

‘I was in shock and the video was from a DOG CAMERA hence why it was no faces it points down!!! And it is used to view your dogs live video. It only records the first time it detects motion why I don’t have more video clips.’ 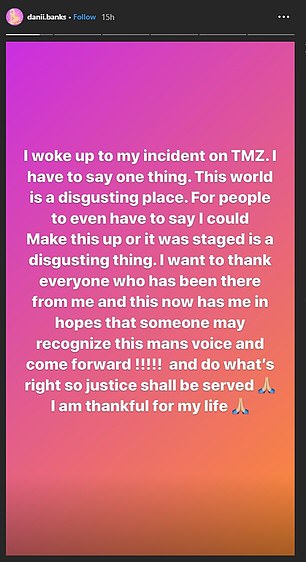 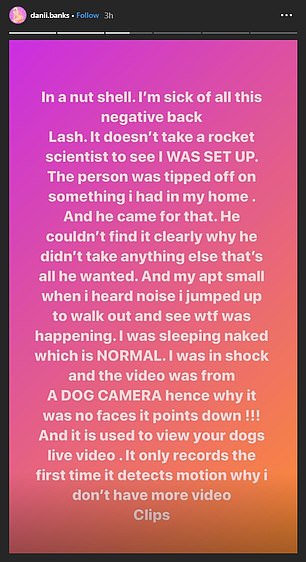 Banks took to Instagram this morning to dismiss the rumors that she had set up the home invasion to gain more followers. She called the allegations it had been staged ‘disgusting’ 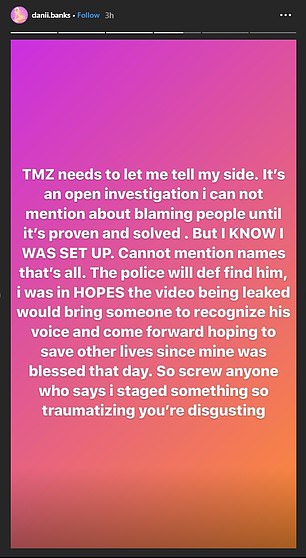 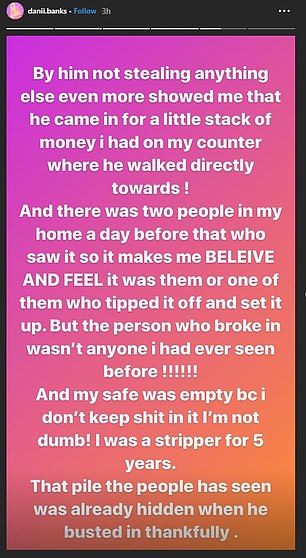 She added: ‘TMZ needs to let me tell my side. It’s an open investigation I can not mention about blaming people until it’s proven and solved. 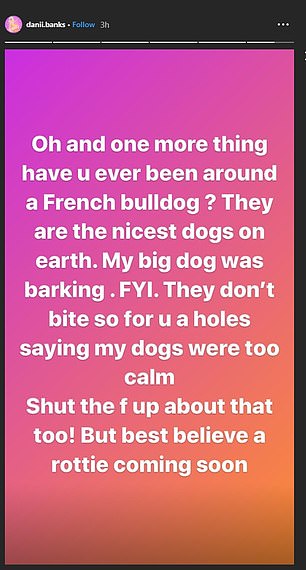 ‘But I KNOW I WAS SET UP. Cannot mention names but that’s all. The police will def find him.

‘I was in HOPES the video being leaked would bring someone to recognize his voice and come forward hoping to save other lives since mine was blessed that day.

‘So screw anyone who says I staged something so traumatizing your’re disgusting.

‘By him not stealing anything else even more showed me that he came in for a little stack of money I had on my counter where he walked directly towards!

‘And there was two people in my home a day before that who saw it so it makes me BELIEVE AND FEEL it was them or one of them who tipped it off and set it up. But the person who broke in wasn’t anyone I had ever seen before!!!!’

Finally she commented: ‘Oh and one more thing have you ever been around a French bulldog? They are the nicest dogs on earth. My big dog was barking. FYI. They don’t bite so for you a holes saying my dogs were too calm. Shut the f up about that too! Best believe a rottie coming soon’.