The CEO of a shipbuilding company in Hawaii, Curtiss E. Jackson, 70, was arrested while attempting to flee the island of Oahu on a fully fueled boat, stocked with food supplies and loaded with about $30,000 in cash.

Jackson had previously been arrested last month, on December 24, on suspicion of defrauding Semisub investors of approximately $30 million from more than 400 investors with the help of his business partner and wife Jamey Denise Jackson, 59.

He is accused of misusing a significant portion of the millions he raised from investors intended for his semiclear-bottomed boat project, but instead using the cash on personal luxuries.

Pictures from Star Advertiser photographer Cindy Ellen Russell show him being escorted off his own boat with his hands cuffed behind his back while being frogmarched by two armed federal marshals and members of the U.S. Coast Guard.

Curtiss E. Jackson, 70, was arrested by U.S. Marshals after the U.S. Coast Guard seized his vessel Semisub One 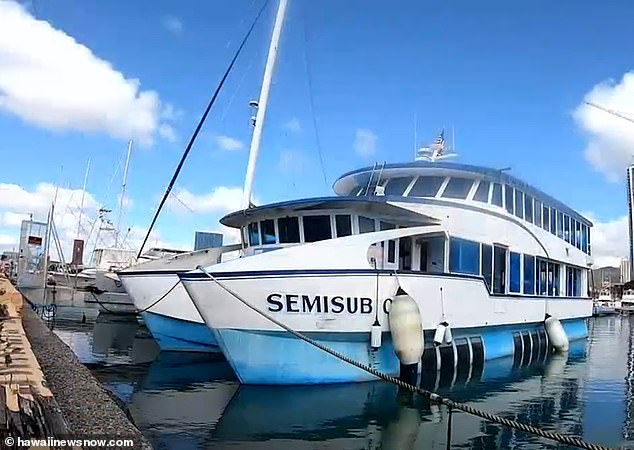 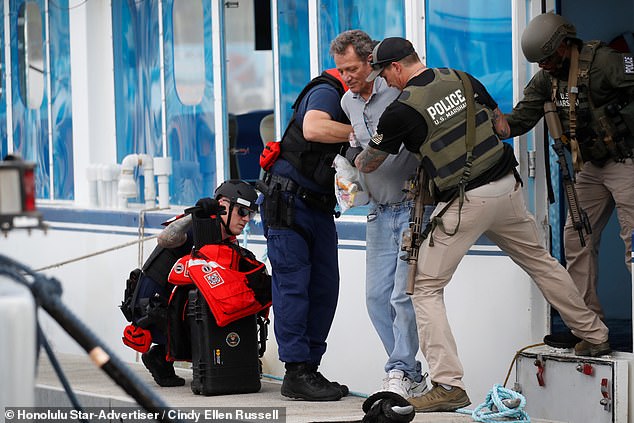 Jackson was deemed a fugitive after he attempted to make a getaway but was forced to return by the Coast Guard. Jackson, who is facing federal securities fraud charges, fled with the boat on Wednesday but was arrested on Friday 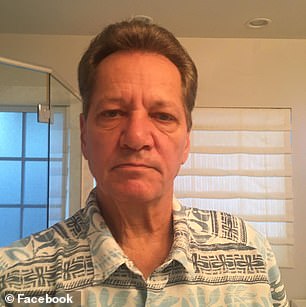 Curtiss E. Jackson, 70, of Honolulu was taken into custody on suspicion of defrauding investors of Semisub. of almost $30 million

On January 4, federal pretrial agency Pretrial Services received a tip that Jackson was planning to flee before his trial and alerted U.S. Marshals and the U.S. Coast Guard.

Federal officials raced to the harbor to prevent Jackson from leaving, but upon arriving, they discovered that both the boat and Jackson were missing according to Hawaii News Now.

A warrant was issued for his arrest and he was deemed a fugitive after Marshals discovered Jackson’s slip in Honolulu empty.

The Marshals enlisted the help of the U.S. Coast Guard Investigative Service and the Office of Law Enforcement for the National Oceanic and Atmospheric Administration to locate the boat.

Jackson was arrested on Friday morning after he was forced to return to Oahu and dock in order to seek assistance for a problem with his rickety boat.

But after fixing the problem he decided to try and flee once again.

The authorities ultimately caught up with him and his boat early on Friday morning, bringing him back to shore.

He was taken into custody and returned to Oahu without incident, and is now being held at the Federal Detention Center in Honolulu pending his court appearance. 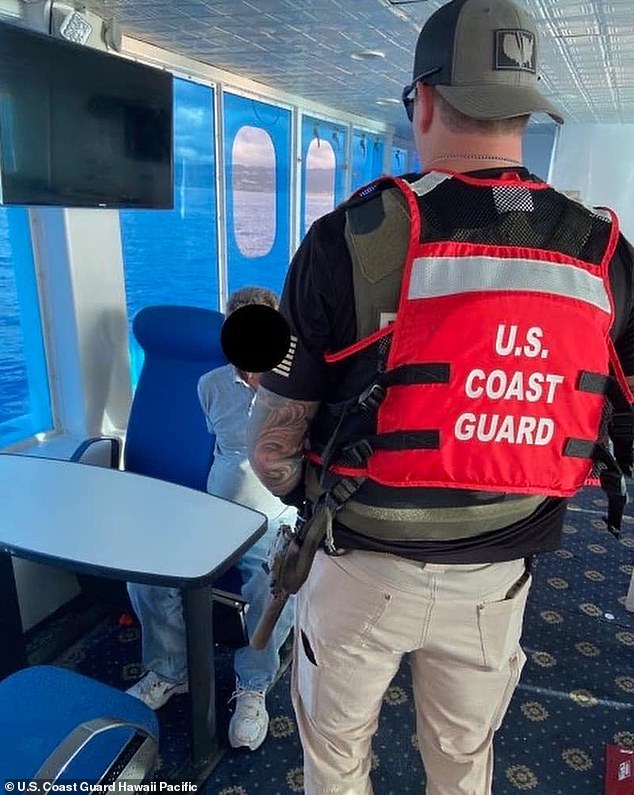 Jackson, on his boat with his hands in cuffs after the vessel was seized by the Coast Guard 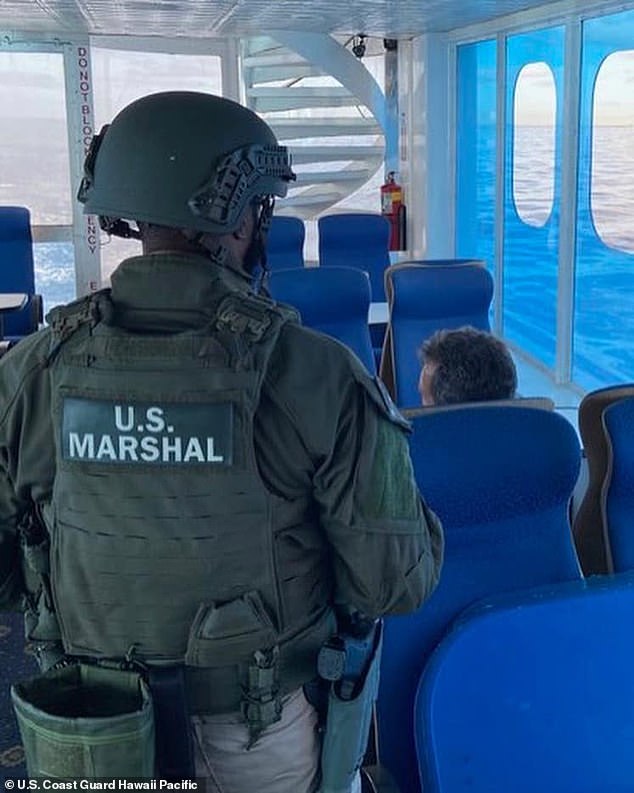 Jackson was originally arrested on December 24, 2022, for federal charges related to securities fraud, mail fraud, and wire fraud. He was then released on pretrial release pending his trial date but appeared to make an attempt to feel the island state

‘Brother-man took this boat out by himself without really knowing how to drive a boat, not to mention not knowing how to work the GPS,’ said Kalahele, a Coast Guard-certified captain to the Star Advertiser.

‘He just couldn’t understand where he was in relation to where he needed to be,’ Kalahele said. ‘He was on the other side, around the corner, Barbers Point side; but he thought he was in front of the South Shore, but he was more toward the west. He was a little lost.

‘I was a little bit nervous,’ Kalahele said. ‘After a long night we finally made it.’

One of the boat’s two motors was malfunctioning and on board the vessel the boat was said to be strewn with junk, tools and several pink polo shirts for a non­existent crew. 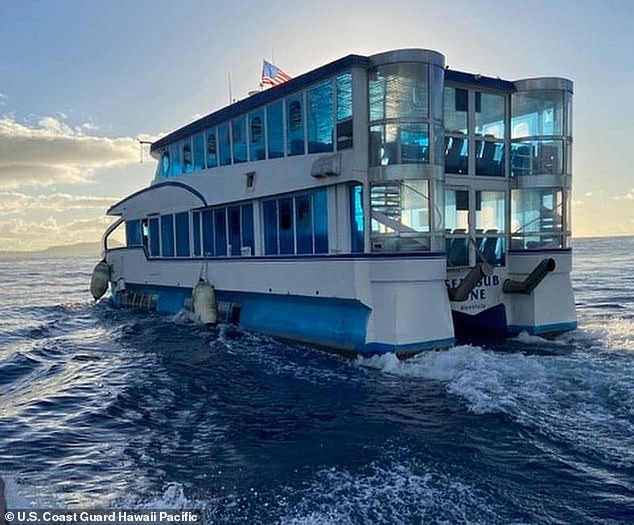 On the upper deck of the boar there were said to be five bags of Whole Foods bagels, various canned goods, ketchup and two boxes of creme sandwich cookies, together with 12-packs of Maruchan instant ramen and Cup of Noodles 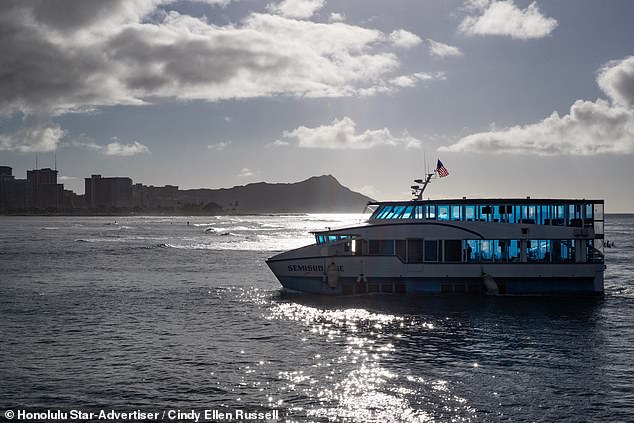 One of the boats two motors was malfunctioning and on board the vessel was said to be strewn with junk, tools and several pink polo shirts for a non­existent crew

In terms of supplies for his voyage to nowhere, there was 400 ‘classic mellow’ American Spirit cigarettes, half a dozen containers of Whole Foods-brand organic cinnamon applesauce, three apple bananas and a bag of clementines all in the Captain’s wheelhouse.

On the upper deck were five bags of Whole Foods bagels, various canned goods, ketchup and two boxes of creme sandwich cookies, together with 12-packs of Maruchan instant ramen and Cup of Noodles.

In the bathroom sat a toothbrush, disposable razor, plastic comb and washcloth.

‘That really stood out to us, you know. We have never had to go get someone at sea. He was by himself with no direction,’ said officials involved with Jackson’s capture to KOIN.

Jackson and his wife Jamey Denise Jackson were accused of selling securities to investors with the promise of creating a fleet of tourism vessels. 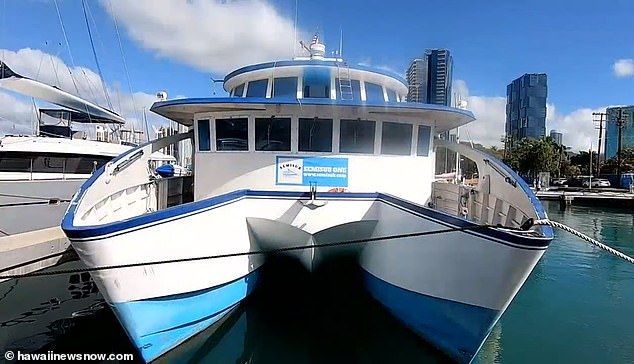 The alleged scheme took place over the course of a decade where they raised money for a prototype boat with a partially transparent hull for viewing marine life.

The couple would continually attempt to reassure investors that their prototype vessel would launch very soon.

But it all appears to have simply been part of the ruse and the couple instead allegedly misused a significant amount of the funds for their own gain and used the money to pay for personal expenses such as luxury homes, pricey vacations  together with psychics, marijuana high-end cars including a Mercedes-Benz and personal credit card bills, the DoJ wrote.

Jackson had earlier been released on a $50,000 bond in October with the strict conditions that he remain on Oahu, not contact anyone involved in the case, refrain from drug use, and adhere to a curfew.

However, prosecutors had sought to detain Jackson before his trial, citing concerns that he might flee and pose a risk to his wife and investors, as he had already violated the conditions of his release by asking investors for money and assaulting his son.