This is the moment a gun runner who tried to smuggle dozens of weapons and thousands of bullets into the UK by hiding them in a car engine was snared by armed officers.

Dramatic footage shows gun-toting police swarming on Michael Nicholls, from Slough, before demanding he gets on the ground and puts his arms behind his back so he can be handcuffed.

The 28-year-old was yesterday jailed for 15 years after being found guilty of working with Denis Kolencukov and Stephen Spires to import the guns from mainland Europe.

Seventy-nine handguns and thousands of rounds of ammunition were seized by Border Force officers based at Coqeulles, France, following a tip off from the Metropolitan Police Service Organised Crime Partnership (OCP) before another 16 weapons were later discovered 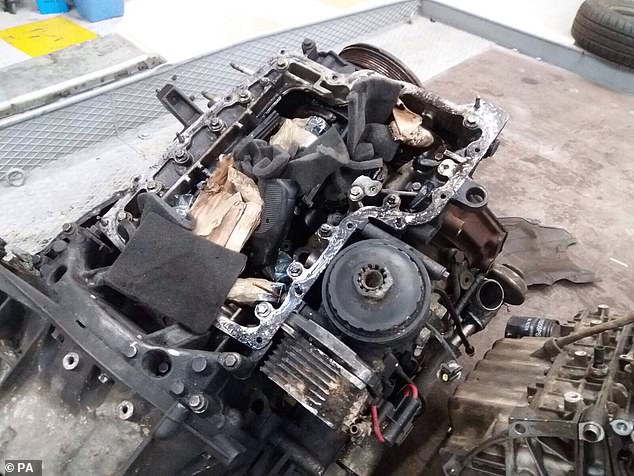 Ammunition was hidden in engine blocks on a vehicle in France just before it entered the Channel Tunnel on July 1, 2017 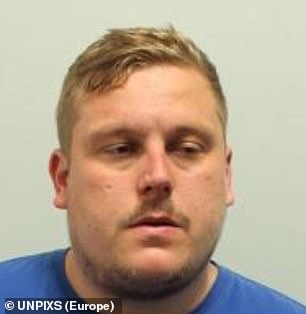 Michael Nicholls, pictured, was yesterday jailed for 15 years after being found guilty of working with Denis Kolencukov and Stephen Spires to import the guns from Europe

Kolencukov was arrested on July 1, 2017 after 79 handguns and thousands of rounds of ammunition were seized by Border Force officers based at Coqeulles, France, following a tip off from the Metropolitan Police Service Organised Crime Partnership (OCP).

The weapons were hidden in specially adapted concealments in engine blocks on the trailer of a van which was en route to the UK.

The driver, a Polish courier, had collected the engines from Kolencukov at the Orlen petrol station in Boleslawiec, Poland, the previous day, unaware of their lethal contents.

A diary seized from the courier had entries detailing seven other previous importations conducted by Kolencukov, all of which were believed to contain firearms and ammunition.

Two days after Kolencukov’s arrest, OCP officers watching an industrial estate in Seaborough, Slough, saw Nicholls and Spires remove items from a shipping container and attempt to drive away in a van.

Armed officers from Thames Valley Police then helped stop the van and arrest the pair, as seen in the video.

Nine firearms were recovered stashed in a plastic carrier bag in the front passenger foot well.

Officers then found another gun in the shipping container, and a further six were recovered as part of police operations across the UK, bringing the total seized as part of the operation to 95.

Nicholls was yesterday jailed for 15-and-a-half years after appearing via video link to Kingston Crown Court. 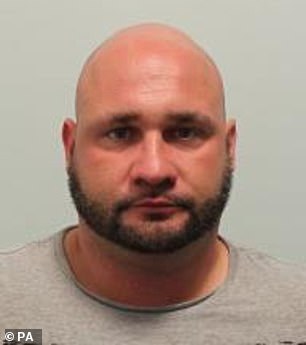 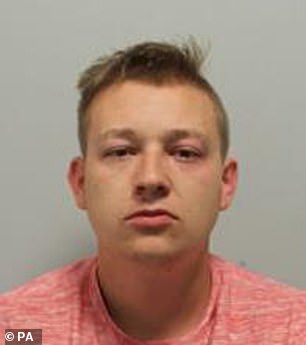 Steven Spires (left) and Denis Kolencukov (right) were convicted for conspiring to import revolvers and ammunition from mainland Europe, and were handed 26 years each

Spires and Kolencukov were sentenced in March to 26 and 19 years and two months respectively.

Prosecutors at a previous hearing said the group carried out seven importations between January and July 2017, making a profit of up to £1.2million.

Detective Chief Inspector Tony O’Sullivan of the Organised Crime Partnership said: ‘Nicholls is the third and final man to be jailed for this extremely dangerous plot to smuggle 95 lethal firearms into the UK.

‘He was a trusted facilitator within the group who was fully briefed on the scale of the operation.

‘Not only were these viable weapons, they were packaged up with thousands of rounds of ammunition, ready to be sold to whomever was willing to buy them.

‘Handguns are the most commonly used firearms by criminals in the UK due to them being easily concealable. This investigation prevented a huge haul of them reaching the criminal market.

‘The NCA and Met Police work closely together to reduce the fear and harm these weapons bring to our streets.’