Events known as ‘drag socials’ have been banned by a university’s student union because they believe they are used to ridicule trans people.

Student representatives at Aberystwyth University said that people attending the events were trying to be ‘as funny as possible’.

The student union at the university in Wales spoke to the local LGBTQ+ society, who said the events were used as a way to ‘ridicule trans people’.

And now all such events will be banned at the university.

The student union at Aberystwyth University spoke to the university’s LGBTQ+ community, who said the events were used as a way to ‘ridicule trans people’

A spokesperson for AberPride, the university’s LGBTQ+ community, said: ‘The decision was made with input from AberPride members, especially members of the trans community, because we feel that most societies who have drag socials do so in a mockery of trans women and the trans femme experience.

‘Often cisgender (and frequently heterosexual) males will take drag socials as an opportunity to ridicule trans people, and AberPride will not stand by and accept that.

‘We are unlikely to want to have a drag social at this time, due to the fact that it would make a large proportion of our members uncomfortable.

‘The SU has said that they are happy to discuss the situation and make an exception based on a case by case basis, to ensure that any drag socials will not become hugely offensive.’ 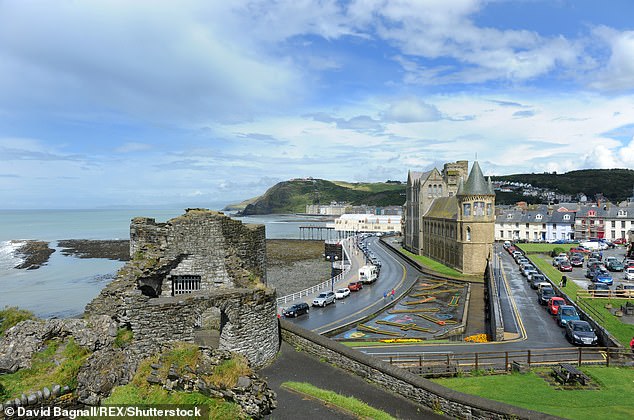 Speaking to students news site The Tab, Aberystwyth SU said: ‘Including “Drag socials” as an example of a banned theme is because they are usually about members of random groups dressing up as the opposite gender in a general way that has the intention of being as funny as possible and not as a celebration of LGBTQ+ pride or sexual liberation in the same way that drag is.

‘If a society or club wanted to organise a drag social to celebrate drag and LGBT pride then the SU would be supportive of that and would put students in touch with relevant people who could help make that event a success.

‘We would also consult with our relevant Liberation Officers and societies to make sure that it considered a range of angles and factors to ensure maximum inclusivity.

‘These rules aren’t about banning fun but have been put in place to protect our LGBTQ+ students and drag community, and brings us in line with the rest of the sector and follow a range of complaints received from those communities throughout previous years.

‘We encourage all clubs and societies to contact us directly if they have any queries about a social theme and as ever we’ll be as helpful as possible.’