ITV’s doctor Dr Ranj Singh has slammed the government following the announcement that the UK now has the highest Covid-19 death toll in Europe .

The health professional, 41, said he was ‘sick and tired’ of justifying the government’s actions relating to the pandemic, as he discussed the new alarming numbers with Philip Schofield and Holly Willoughby.

The UK has become the first country in Europe to pass 50,000 deaths due to the pandemic, and the fifth country in the world with the highest death toll behind India, the US, Brazil and Mexico.

This Morning, along with Lorraine and GMB, ran a ‘All Doctors on Deck’ health special today, with Dr Hilary, Dr Zoe Williams, Dr Amir Khan and Dr Singh all discussing coronavirus-related news on each show.

Dr Singh went on the say that the government ‘could have and should have done better.’

Viewers applauded Dr Singh for ‘saying it like it is’ on the morning show.

Dr Ranj Singh, 41, slammed the government’s response to the coronavirus pandemic on This Morning after it was announced the UK has the highest death toll in Europe, the fifth highest in the world

The viewers praised Dr Ranj for ‘telling it like it is’ during the morning TV specials that saw Dr Ranj being joined by Dr Hilary, Dr Zoe Williams and Dr Amir Khan all discussed covid-related topocs on Good Morning Britain, Lorraine, and This Morning 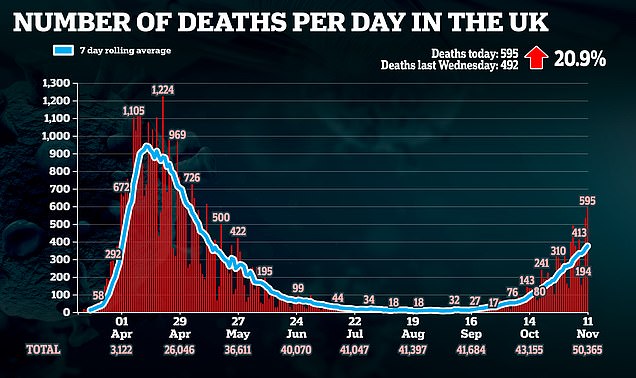 The doctor had just been asked by host Holly Willoughby what he made of the new death toll, who said they were ‘grim and horrible.’

‘I am sick and tired of justifying the actions of the government now, I think,’ Dr Ranj said. 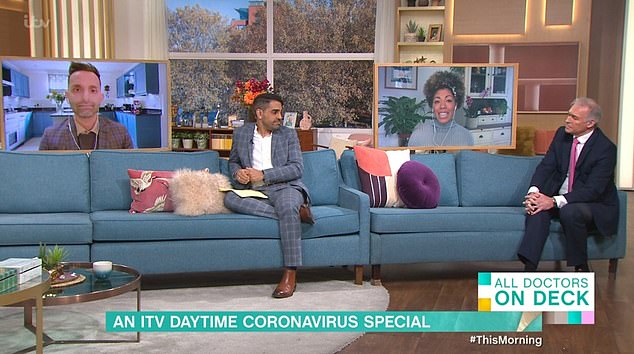 Dr Zoe agreed with Dr Singh, saying the way Track and Trace had failed was a ‘huge disappointment’

‘Who would have thought that giving contracts to your mates wouldn’t work out quite so well?’ he added, referencing analysis that shows the government handed £1billion in contracts to companies that are ‘friends’ of the Boris Johnson government.

However, Dr Ranj ended on a more positive note, saying he was hopeful the way Covid is dealt with would be more ‘evidence-based’ from now on.

‘But now that we know so much more, I am hopeful that we are going to do better,’ he said.

‘And I hope that now that we do have evidence on things, we can be a bit more evidence-based on the way we deal with things.

‘Because we all want to stop coronavirus in its tracks. Everyone wants to stop the misery and illness that it’s caused,’ he added.

‘We don’t want anymore of our love ones to die or suffer because of this, we’re all doing our best.

Dr Zoe, who was also speaking on the show via Zoom link, agreed with Dr Ranj when she talked about the failures or the track and trace system.

She said track and trace was our best shot had flattening the coronavirus curb, and said: ‘the fact our system has failed so terrible is a huge disappointment.

Viewers agreed with the heath professionals on Twitter, applauding Dr Ranj for speaking his mind.

‘Dr Ranj Singh, government failed with PPE and track and trace,’ one wrote.

‘Well said Dr Ranj about the government’s disastrous response to COVID, #ThisMorning and now the doctors on track and trace,’ another agreed.

‘Fair play to Dr Ranj for saying it like it is. The UK was failed by its appalling government. There is simply no doubt about that,’ one said. ‘ 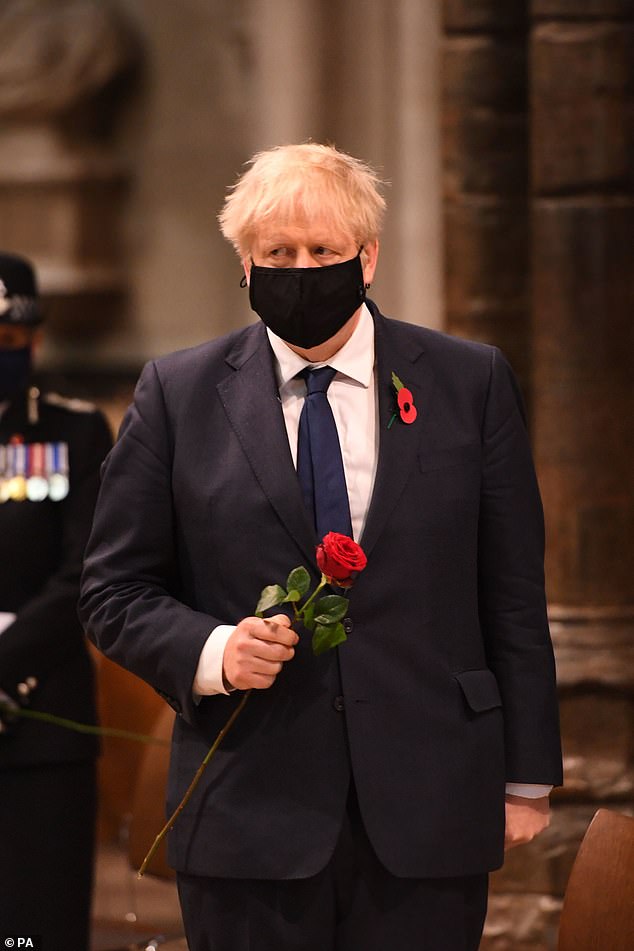 The Prime Minister, pictured on Armistice Day, has said the new UK death tolls was a stark reminder that the UK was not ‘out of the woods yet’

True that Dr Ranj they should of let the NHS run test and trace no their mates private company,’ said another.

‘You go Ranj,’ one simply said. 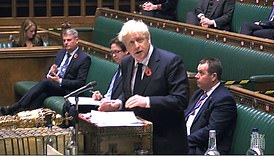 At PMQs today Boris Johnson gave a stern message to the public that they should not be expecting an early end to coronavirus restrictions, despite claims a vaccine could start being rolled out by Christmas

Boris Johnson today warned that a vaccine will not deliver a ‘knockout blow’ to coronavirus as Tories insisted he must not use the prospect of jabs to keep the country in lockdown longer.

At a bad-tempered PMQs session, Mr Johnson again welcomed the news that Pfizer’s vaccine had been 90 per cent effective in early trials.

But he gave a stern message to the public that they should not be expecting an early end to restrictions, despite claims it could start being rolled out by Christmas.

He said the ‘best way to get this country back on its feet’ was to ‘continue on the path that we are, driving the virus down’.

The premier said science had given the country ‘two big boxing gloves’ via a possible vaccine and mass testing, but added: ‘Neither of them is capable of delivering a knock out blow on its own.

‘That’s why this country needs to continue to work hard to keep discipline and to observe the measures we’ve put in.’

Britain’s official coronavirus death toll passed the grim milestone of 50,000 today after health chiefs announced another 595 victims in the highest daily count since May.

Boris Johnson said the figures was a stark reminder that the UK ‘was not out of the woods yet’ despite promising news about a vaccine earlier this week. Officials say Covid fatalities will continue to rise for ‘several weeks’ due to high infection rates though October.

But despite the gloomy warnings of thousands more deaths, the silver lining is that daily cases are down week on week. A total of 22,950 new infections were recorded today — which is 8.8 per cent lower than the 25,177 that were registered last Wednesday.

The figures come after a catalogue of data has suggested that lockdown may have been a rash move and that the country’s outbreak appeared to be slowing down already thanks to the three-tier local lockdown system imposed in mid-October.

Department of Health figures show the UK’s official death toll now stands at 50,365, with today’s figure the highest recorded in a single day since May 12 – when there were 614 fatalities.

It comes after the Prime Minister today warned that a vaccine will not deliver a ‘knockout blow’ to coronavirus as Tories insisted he must not use the prospect of jabs to keep the country in lockdown longer.

At a bad-tempered PMQs session, Mr Johnson welcomed the news Pfizer’s vaccine had been 90 per cent effective in early trials. But he gave a stern message to the public that they should not expect an early end to the blanket restrictions, despite claims it could start being rolled out by Christmas.