My wife, Clare, and I are both in our 60s. Our children have grown up and left home so we thought that by now our lives would be slowing down. Yet we seem to be busier than ever.

We talk about wanting to do less, but the fact that we can’t decide what to cut back on — fewer Zoom calls, fewer projects or fewer Instagram posts — suggests we are happy as we are.

And that seems to be true of a lot of busy people. Although we moan about not having enough hours in the day to get things done (busy people like to brag about how busy they are), a recent study concluded that having more free time does not necessarily make people happier, while having lots of spare time can make us positively unhappy.

The findings, from the University of Pennsylvania, were based on a questionnaire filled out by more than 21,000 Americans; they were asked to provide a detailed account of what they did during the day and to score their sense of wellbeing — how good they felt about their lives.

Although we moan about not having enough hours in the day to get things done (busy people like to brag about how busy they are), a recent study concluded that having more free time does not necessarily make people happier

The researchers found that people who had very little free time were the least happy and that, as free time increased, so did the sense of wellbeing.

But this levelled off once people had about two hours of free time (time they could spend how they wanted, without work or domestic chores) a day, and began to decline if they had more than five hours.

Why? It stands to reason that being busy gives us a sense of purpose. It also helps keep our brains in good shape.

Proof of this comes from a number of studies, including one carried out a few years ago by the University of Texas. They asked middle-aged and elderly volunteers to do brain tests and fill in a ‘busyness’ questionnaire.

They found, not surprisingly, that people tend to get less busy as they get older, and that women of all ages seem busier than men. 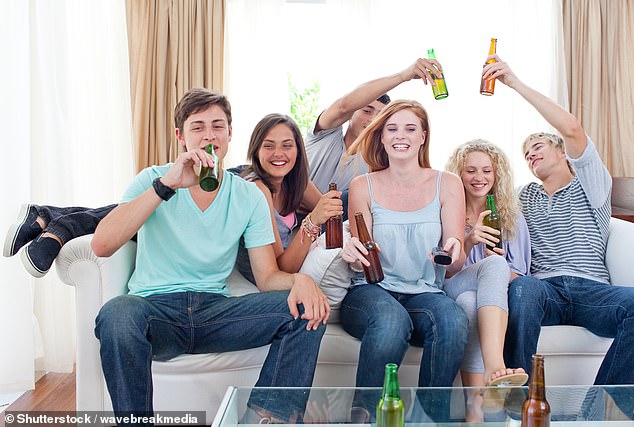 Researchers found that people who had very little free time were the least happy and that, as free time increased, so did the sense of wellbeing. But this levelled off once people had about two hours of free time

The researchers put this down to people with busy lifestyles being out in the world, having new experiences and meeting new people — all of which is more mentally demanding than being at home trying to decide which programme to watch on Netflix.

They also suggest that because busy people are often having to learn new things, this leads to the growth of new brain cells, particularly in the hippocampus, the area of the brain linked to memory.

Studies have shown that spending your spare time struggling with a new language, or a mentally challenging physical activity, such as dancing, is really good for the middle-aged brain.

The downside of being busy is that it can be stressful, particularly if you have to work long hours or don’t have control over what you do in your spare time. It also means that you may not be carving out time to meet with friends and family.

And that’s bad because maintaining close relationships is hugely important for our physical and mental wellbeing.

We know this from research such as the Harvard Longitudinal Study, one of the longest human studies ever carried out. In the 1930s researchers recruited 724 students from Harvard University (all male), as well as young men from the Boston area, for a life-long study.

Some of those men, such as John F. Kennedy, went on to become rich and famous, while others led normal lives. The main finding of the study was that the men who had close friends and partners were far more likely to stay happy and healthy into old age than those who didn’t.

A nd the effect on your health of having close friends is significant. A study where they monitored more than 300,000 middle-aged people for an average of seven-and-a-half years found that those with the strongest social ties were 50 per cent more likely to be alive at the end of the study than people with fewer friends.

The impact of having close friends is comparable to quitting smoking and is much bigger than, say, slimming or becoming more active (though, of course, both are good things to do anyway).

I’m not as good as I’d like to be at keeping up with old friends (though I am resolved to do better), but one thing I have managed to prioritise is our local book club, which has met for many years, and we are now all close friends.

If you’re already very busy, then you won’t want any advice from me about things you can productively add to your life to make yourself even busier.

But if you do have more time on your hands than you would ideally like, I recommend getting in contact with old friends, inviting others to go on walks with you, taking up a new hobby or volunteering.

As the American philosopher Henry Thoreau once said, ‘It’s not enough to be busy. So are the ants. The question is: what are we busy about?’

Prolonged sitting is sometimes described as the new smoking — not only is it really bad for the heart, it increases the risk of developing type 2 diabetes and has even been linked to some cancers.

Most of us spend far too much time sitting down, either working at computers, playing games or watching TV.

One of the best ways to counter the effects of prolonged sitting is to get up and move every 30 minutes or so.

And now we know how long you need to do this: a study in Sweden found two to three minutes of being active for every 30 minutes of sitting, seems to be what it takes to protect your metabolic health, ideally strolling around — even better, stair climbing or doing squats.

To ensure you actually do it, get an app or set your phone to remind you to move twice an hour.

Why I can’t wait to have a booster jab

When the time comes I will be eagerly lining up to get my booster Covid jab, and hopefully get a flu jab at the same time.

I am a big fan of vaccines — the fact is, they work and a recent study by the Office for National Statistics (ONS), showed what a brilliant job the Covid vaccines in particular are doing.

Yet despite the overwhelming evidence that Covid vaccines are safe and effective, there are still millions of adults in the UK who have so far chosen not to have one. They not only put themselves at risk, but the rest of us as well.

One of the vaccine-hesitant is a friend of mine. A few days ago she told me she hadn’t had the jab and isn’t sure she wants to. She’s in her 40s and doesn’t think she’s at risk.

As I pointed out, she might not become seriously ill, but if she gets infected there’s a good chance she’ll get long Covid.

While Covid kills mainly older men, the people most likely to get long Covid are women aged 35 to 69 years.

According to the ONS, around one in four in this group will have at least one lingering symptom five weeks after being infected, and the symptoms can be really unpleasant, ranging from loss of taste and smell to mental fogginess, being completely drained of energy, and, as another friend put it, ‘feeling like there is someone sitting on your chest’.

The best way to save yourself from long Covid is to get vaccinated.

A study by King’s College London showed that being double vaccinated not only slashes your risk of feeling ill if you get infected, but if you do develop symptoms, it halves the chance that these will persist.

I’ve told my friend the facts. I really hope she changes her mind.