Queensland Governor and former top doctor Jeannette Young – who led the fight against the virus in the state – has tested positive to the virus.

Dr Young is in isolation at the state’s Government House, with her team revealing she is experiencing mild symptoms only.

‘Her Excellency will conduct her constitutional duties virtually and the rest of her program will be rescheduled,’ a spokesperson announced. 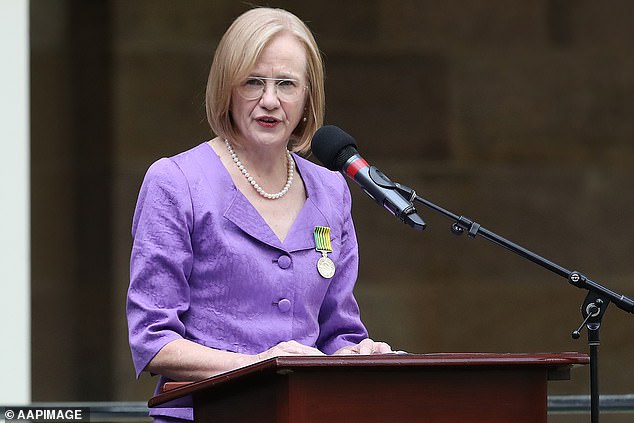 Dr Young spent Thursday greeting seniors during a tour of the official residence. Members of the Portofino Residential Aged Care Facility toured the building in the morning.

Dr Young’s team said the aged care home has been notified and the meeting was Covid-safe.

‘The Governor was socially distanced with the group and was in their company for less than 5 minutes.’

‘So many other people across the state have it as well – there’s over 550 people currently in hospital – but I know that Queenslanders would also like to pass on their best wishes as well to the Governor,’ she said at a press conference.

Dr Young came under fire as chief health officer for comments she made about the AstraZeneca vaccine which were later used in an anti-vax campaign.

‘I don’t want an 18-year-old in Queensland dying from a clotting illness who, if they got Covid, probably wouldn’t die,’ she said.

Dr Young made the remarks at a media conference in 2021.