I’ve had a constantly runny nose for a few years, and last month I was diagnosed with allergic rhinitis. I use a nasal spray called Dymista, which has some effect. Now I’ve developed a problem with salivating in the right side of my mouth. Is this due to the medication?

Allergy-related symptoms affecting the nose are often treated with Dymista, a nasal spray that combines a steroid and anti-allergy medication azelastine.

Each medication is known to alter taste and irritate the throat, but wouldn’t usually cause changes in salivation. A separate issue is likely to be to blame.

Saliva is an important fluid involved in taste, dental health, digestion and the immune system. The mouth has a number of salivary glands on both sides and most saliva is produced by glands underneath the jaw.

Sometimes too much is made, due to dental problems, acid reflux or as a result of side effects from medications such as barbiturates.

It is also a symptom of chronic sinus infections. This may tie in with a runny nose, or what doctors call post-nasal drip.

Excess saliva can also result from muscle problems that affect swallowing, such as an issue with specific nerves, Parkinson’s disease, multiple sclerosis or even a stroke.

Any problem with salivating that hasn’t been noticed before should be discussed with a doctor. The GP may suggest a chat with a dentist, as well as a referral to a specialist who can assess swallowing function and the health of the salivary glands. An ear, nose and throat expert or a head and neck surgeon would be best placed to do this.

I was recently diagnosed with interstitial cystitis, or bladder pain syndrome, and was prescribed hydroxyzine. It has been a great help in reducing the pain at night, but I seem not to be able to go a night without taking it. Is it safe to take most days long-term? I am 70 years old.

Interstitial cystitis is a problem with the bladder that causes a range of unpleasant symptoms such as pelvic pain, feeling you urgently need the toilet, and going more than usual.

These symptoms warrant an investigation by a GP. In some, unusual cases they could indicate bladder cancer, but it’s much more likely they are signs of an infection.

Doctors are not certain what causes interstitial cystitis, and that makes it hard to treat. There are several possible treatments, and patients often try many to see which works. Painkillers, nerve pain pills, medicines to stop the urgency and antihistamines might all be tried.

Hydroxyzine is an antihistamine medication usually used to treat itching and allergic conditions. It is known to cause drowsiness, so it may well help a patient sleep through pain.

Hydroxyzine works by reducing histamine – the chemical involved in inflammation – which makes it effective for relieving pain as well as for reducing the frequency of urination.

But it isn’t safe for everyone. Elderly people, and those with underlying kidney and heart problems, may be recommended to take a lower dose.

It can cause side effects other than tiredness, including a dry mouth, depression and diarrhoea.

Patients are normally advised to take hydroxyzine early in the evening, so the tiredness wears off by morning.

It is usually perfectly safe to take it long-term, as long you’re monitored closely by your GP.

I’ve been taking mirtazapine for anxiety for more than 20 years. About three years ago, I decided I wanted to stop, and I started taking half a tablet. I developed dizziness and breathing problems. Doctors diagnosed atrial fibrillation (AF) and prescribed a statin and clopidogrel. I stopped the mirtazapine, but my breathing problems worsened and I’d wake up feeling even more anxious than before. Why is this drug so vicious?

Mirtazapine, a newer type of antidepressant, increases the amount of certain chemicals in the brain which, for reasons we don’t yet understand, seems to ease symptoms of depression and anxiety. It is very effective for these conditions.

DO YOU HAVE A QUESTION FOR DR ELLIE?

Dr Ellie can only answer in a general context and cannot respond to individual cases, or give personal replies.

If you have a health concern, always consult your own GP.

When you stop taking any antidepressant, it is crucial to reduce the dose gradually over a couple of months. This is especially true for mirtazapine, which is considered medium-risk for withdrawal symptoms.

Those who have been on the medication for several years are more likely to suffer these symptoms. People experience shaking, headaches, tingling and feeling anxious or dizzy.

The complicating factor here is a simultaneous heart problem. AF causes the pulse to race and beat irregularly, leading to dizziness, palpitations and even shortness of breath. So it can be hard to tell if it is this that is causing the anxious, restless feelings, or withdrawal symptoms.

For AF, doctors most often use medications to slow the heart – rather than just a statin and clopidogrel – and it could be that starting one of these could reduce the anxiety. It is important to get the AF under control so it doesn’t add to the feelings of panic.

A GP could also consider prescribing something else for anxiety, such as therapy or a calming medication to take when the feeling is strong.

Have you struggled to get hold of vital medication? 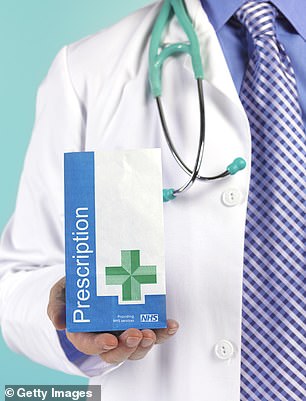 Have you found it difficult to get a vital medication?

Are you struggling to get hold of your usual medications? We’ve heard a lot this year about problems with the supply of hormone replacement therapy (HRT), but I’m starting to get concerned too about the number of alternative prescriptions I have to write these days because the drugs that I usually recommend are out of stock.

Steroid lozenges for mouth problems and certain sleep medications are particularly tough to get hold of, as well as some diabetes drugs.

I’m sorry to say I don’t yet have any answers about why this is happening, or what the solution is, but I’m going to try to get to the bottom of it all for you, so please let me know if you’ve had trouble obtaining your prescriptions.

Write and tell me using the email address DrEllie@mailonsunday.co.uk

Mental illness is not a stigma

I’ve noticed that some doctors don’t like using the term ‘mental illness’.

Instead, they refer to the psychiatric problems of their own or others as ‘issues with mental health’.

I’ve also heard people saying things such as: ‘I’ve had mental health before.’ Not only is this grammatically incorrect, it reinforces the stigma.

You wouldn’t skirt around saying that someone had diabetes, or heart disease, so why do it with mental illness?

It is also important to distinguish between ‘mental health’ – which we all have – and ‘mental illness’, which is a medical condition.

If we want to encourage people to speak openly about their emotional wellbeing, and urge them to seek help where necessary, we shouldn’t be afraid to call it what it is.