Police were forced to stage an intervention after a huge house party overflowing with lockdown rebels sprung up on Saturday night.

Selfish party-goers showed a complete disregard for the Government’s coronavirus safety measures by gathering in large numbers and packing into a house in Stockton, Durham.

Around two dozen officers were required to attend, along with four paramedics as the illegal gathering spiralled out of control.

The youths showed scant regard for the current Covid-19 crisis which the UK finds itself embroiled in, with many fleeing the scene upon the arrival of the officers while the remainder were immediately instructed to go home.

Strict Government requests to stay indoors and not congregate during the long bank holiday weekend were swiftly ignored as the events were said to rapidly escalate. 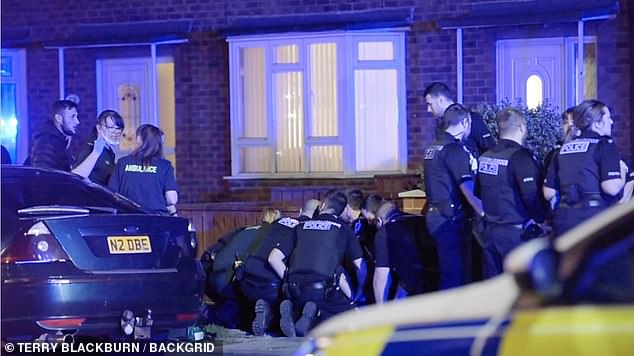 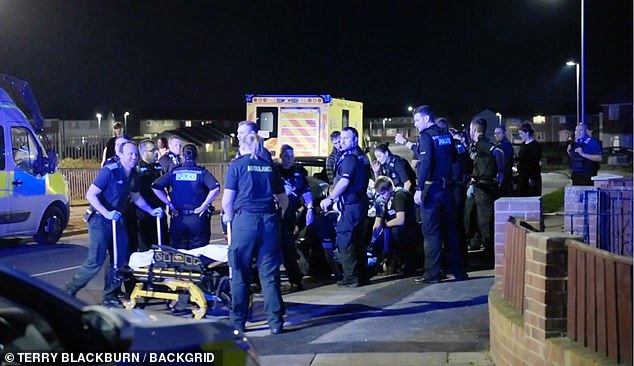 Pictures reveal the volume of police and medical staff needed to attend the party, despite resources up and down the country being stretched by the coronavirus crisis

The blue glow of emergency lights bathed the residential street as police promptly ended the reckless scenes, with the party having started around 9pm.

One man was said to have been arrested while another person refused medical treatment from paramedics.

Images from the police intervention appeared to show a young man on the floor outside the property surrounded by medical staff, who otherwise had been giving their time on the frontline tackling the pandemic.

An eyewitness told the Mirror: ‘The rest were chased away and asked to go back into their homes. Around 20 officers and four paramedics were on scene.’

A spokesperson for the North East Ambulance Service said: ‘We got a call about 9.15pm from the police to help assess a patient. On our arrival the patient refused treatment, so we left.’ 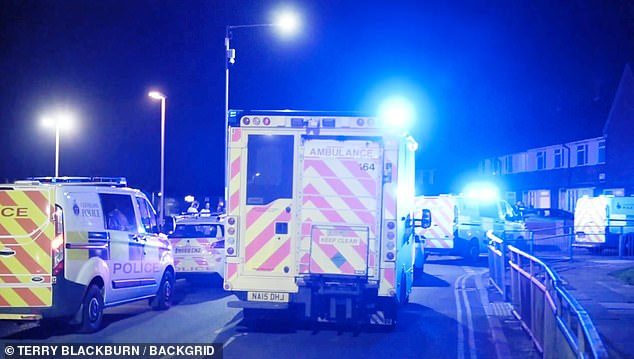 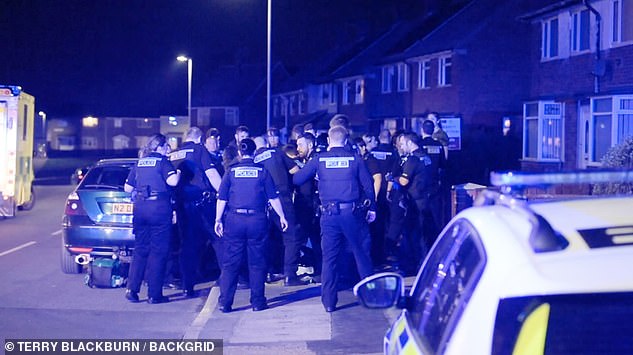 Around two dozen officers were required to attend, along with four paramedics as the illegal gathering spiralled out of control 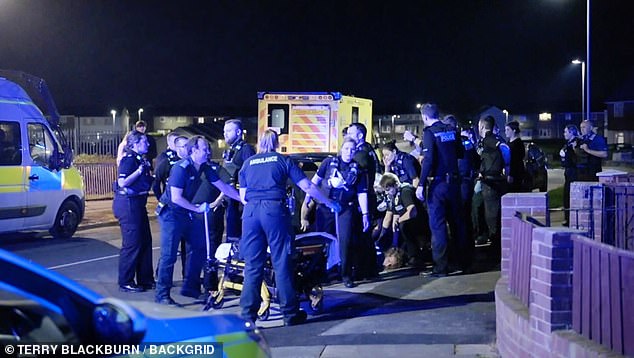 Emergency lockdown regulations have now been drafted into UK law, stating clearly that people should only leave the house for essential activity, such as grocery shopping or one instance of daily exercise.

The news of the party in the north east comes as the latest in a series of rule flouting seen up and down Britain, as Easter bank holiday brought scorching temperatures.

Over the weekend parks and beaches were once again filling up with people flouting lockdown rules by sunbathing despite clear instruction otherwise.

Many councils have now also been forced to shut cemeteries to stop Easter mourners gathering to lay flowers.

Shocking pictures have shown sunbathers lounging on the grass around London including Battersea Park and other famous sun-soaking spots, as police and community support officers pleaded with individuals to get back indoors and play their small part to assist in fighting the crisis.

Away from London, beaches are far quieter than normal Bank Holiday weekend, but a minority continue to head out for walks along the shore. It comes after the coastguard was called out to a scuba diver who was caught fishing under Brighton Pier on Saturday night. 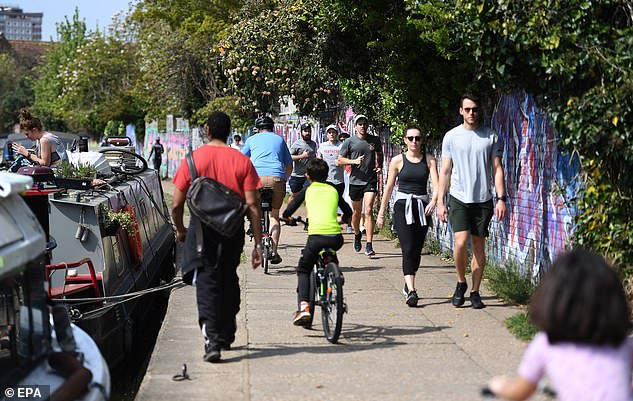 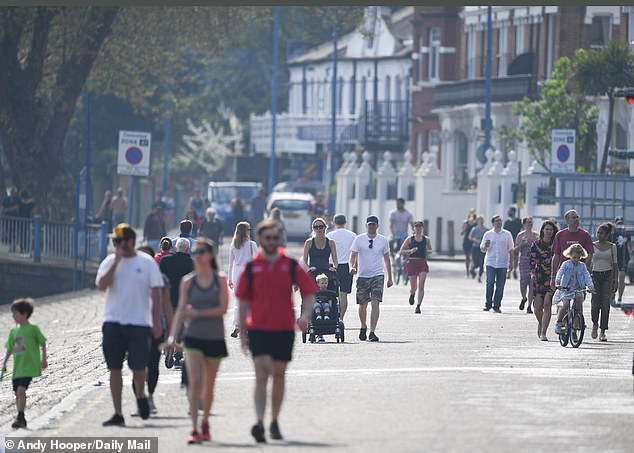 Families can be seen out exercising next to the towpath in a busy Putney, London, on the afternoon of Easter Sunday 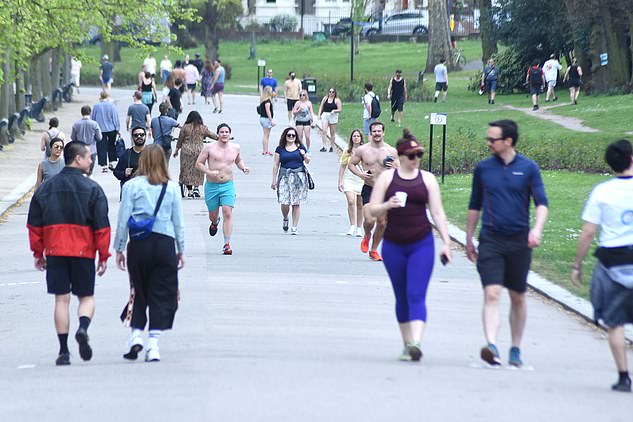 A busy Victoria Park on Easter Sunday is making it difficult for people to stay two metres apart – the recommended distance to try and slow the spread of coronavirus. Joggers are seen running topless in the park alongside walkers

Politicians and nurses have repeatedly pleaded with the country to stay indoors and protect the NHS, but the spring heat wave has seen a small group of people, now being referred to online as #Covidiots, ignoring advice.

The latest figures from Easter Sunday say there have been 84,279 coronavirus cases reported in the UK and at least 10,612 deaths.

On Sunday Prime Minister Boris Johnson paid tribute to the NHS nurses and doctors who saved his life with a special mention to the two medics who stood by his bedside for 48 hours when ‘things could have gone either way.’

Mr Johnson spent the last week in St Thomas’s Hospital – including three nights in intensive care – being treated for the virus.

Shortly after he was discharged the Prime Minister released a video thanking the medical professionals who aided his recovery.

Specifically he thanked a group of nurses in the video released this afternoon, he said: ‘I am going to forget some names, so forgive me, but I want to thank Po Ling and Shannon and Emily and Angel and Connie and Becky and Rachael and Nicky and Ann.

Adding special mention for two health care staff who ‘stood by my bedside for 48 hours’, he said: ‘They are Jenny from New Zealand – Invercargill on the South Island to be exact – and Luis from Portugal – near Porto.’