Dozens of motorists were stranded for hours after filling up their cars with contaminated fuel that ‘looked like tea’ at a Morrison’s petrol station.

Around 30 vehicles ground to a halt in Leicester on Tuesday after filling up with the ‘watery orange’ petrol which ‘looked like tea.’

Motorists were left waiting for up to seven hours to have their tanks drained after breaking down on the forecourt or just several metres away.

Morrisons immediately shut off the pumps and closed down the petrol station on Aylestone Road while an investigation was launched.

The supermarket has since apologised and confessed maintenance contractors accidentally transferred ‘contaminated product’ into the fuel tank.

But furious customers have since blasted ‘rude and unhelpful’ staff who left them in the dark before giving them just £10 credit to refill their cars. 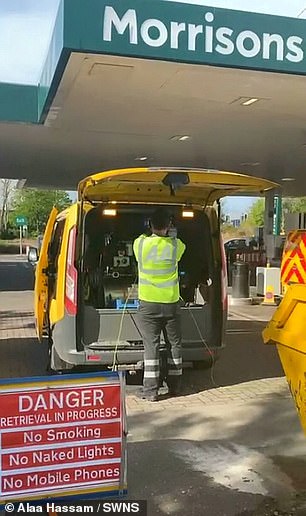 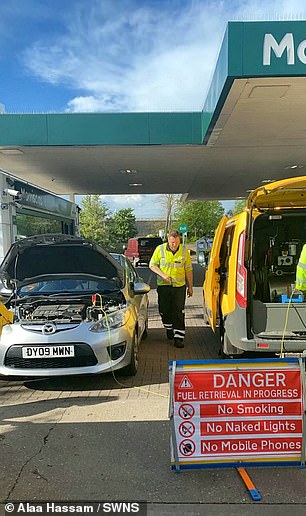 Motorists were left waiting for up to seven hours to have their tanks drained after breaking down on the forecourt or just several metres away. Pictured: The scene 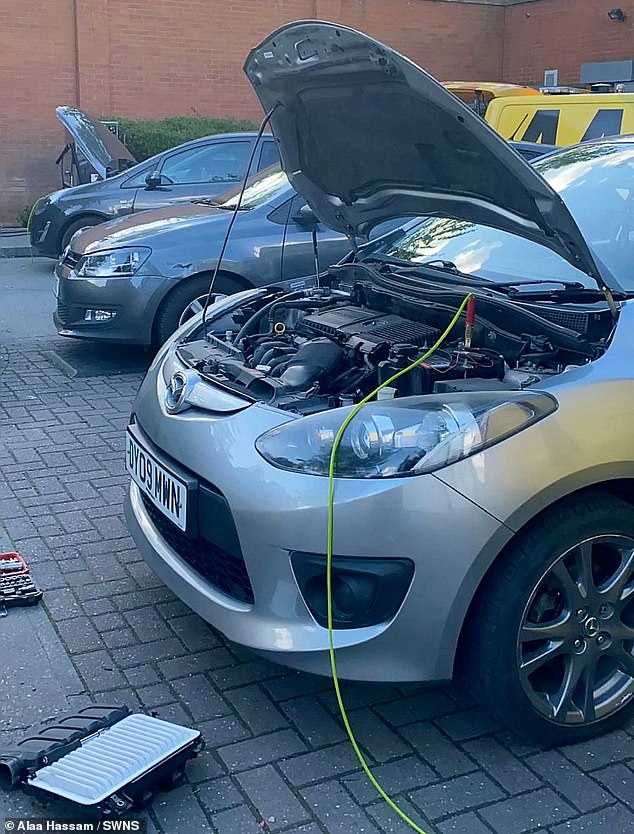 Alaa Hassam, 21, a school teacher from Wigston, Leicestershire, was one of many drivers left waiting for hours after filling up with petrol which contained ‘sand, grit and water’.

She said: ‘I had just had my Covid vaccine at Leicester Royal Hospital and thought I would fill up on the way back.

‘I think I put £10 to £15 in, just enough to get me to work the next day. When I went into the shop to pay there were two angry men speaking to the cashier.

‘One said he had put petrol in his car and now it wasn’t working, but the cashier said it must be the car because there was nothing wrong with the fuel. 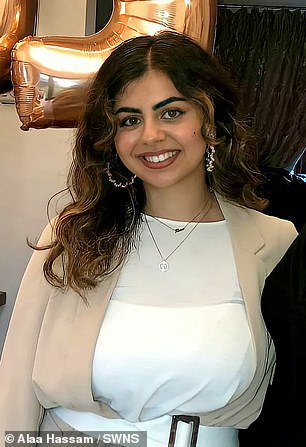 ‘I left the shop and started my car which worked fine, maybe because it still had some of the old fuel in.

‘But I came to a hill on the road behind the Morrisons when the car suddenly came to a stop.

‘I ended up in between a bus lane and the normal lane. All of the lights on the dashboard were flashing and the steering wheel had jammed.

‘I called my brother and the breakdown company and they took me back to the Morrisons to remove the dirty fuel.’

Ms Hassam added there were ‘lots of broken down cars and angry drivers,’ upon her return.

She said: ‘It was hard to work out what was going on because the Morrisons’ staff wouldn’t speak to us.

‘It was absolute chaos. I filled my car up at 12.20pm and didn’t get home until 7pm. It felt awful being completely helpless.

‘Initially Morrisons weren’t sure what was wrong with the fuel but when our tanks were empty we were shown how they were filled up with sand, grit and water.

‘So far Morrisons have not offered compensation and told us to go through insurance.

‘But why should we go through insurance when that will raise our prices for the next five years and it was their fault. I’m told there could be lasting damage. 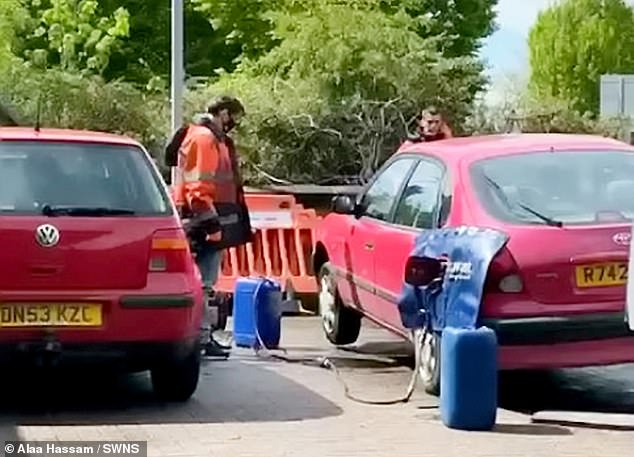 ‘The cashiers and managers were quite rude as well and walked away and wouldn’t speak to anybody. That’s not how they should’ve behaved in that situation.’

Charlotte Sullivan, 27, said her car broke down just around the corner from Morrisons after she filled up.

She said: ‘I got towed to a garage and that’s when they took out the fuel tank and poured it into a jug and it was just brown.

‘They were shocked. He said it looked like someone had put a cup of tea in there.’

Luke Cook, 43, a mechanic from Wrong Fuel Solution, said he was initially called out to ‘do three vehicles’ and described the scene as ‘madness.’

He said: ‘There were cars on the exit, cars on the slip road out, five cars in the petrol station and within half a mile of it, we saw four others broken down. 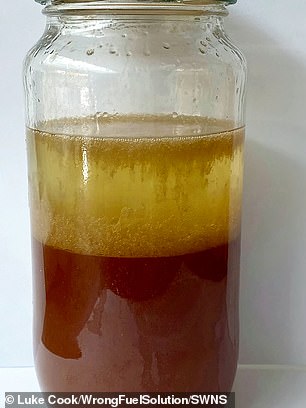 ‘There are obviously far more vehicles that broke down in the area. I would imagine there are at least 30 cars affected.

‘We’re going out to drain a few more cars tomorrow that actually made it home before realising the problem.

‘I’ve never seen anything like this before apart from when they let the water level get too high in another Morrisons about eight years ago.’

He added the liquid was ‘quite orangey’, saying it was ‘probably 50/50 water and petrol with a layer of sediment and residue in between.’

Mr Cook said: ‘If you took the cars to a main dealer they would probably say they need to be written off or pay £5,000 to £6,000 to remove the contaminated fuel.

‘It took us about 45 minutes on each car to empty the fuel tank, flush the fuel system and refill the tank with clean fuel to dilute it.

‘Then they were up and running, but they will splutter for a few days while the water goes out.

‘The manager didn’t want to know, he wasn’t being very helpful at all.

‘Originally when we told our customers to fill the whole tank we thought Morrisons would pay for it, but they only paid £10.

‘One chap had only filled up £16 in the first place and couldn’t afford to pay for a full tank, so we ended up paying.

‘Some people had been waiting for five or six hours.’

A spokeswoman for Morrisons said: ‘We are really sorry for the disruption caused to customers.

‘A contractor completing maintenance work on our tanks accidently transferred some contaminated product into a live tank.

‘We reacted immediately and shut off the pumps – we are currently investigating what caused the issue.

‘Any customers who were unfortunately impacted should take any receipts to the customer service desk at the store and they will help them.’