Police have swarmed on protesters gathering in Melbourne as anti-lockdown rallies reach its sixth day.

Hundreds of officers arrested a dozen demonstrators at the St Kilda foreshore on Saturday in a rally that peaked up to 200 people.

Protesters gathered in the inner beachside suburb chanting slogans like ‘together, united, we’ll never be divided’ and ‘we are not afraid’.

Other participants in the crowd were heard shouting ‘f*** Dan Andrews’ from megaphones. 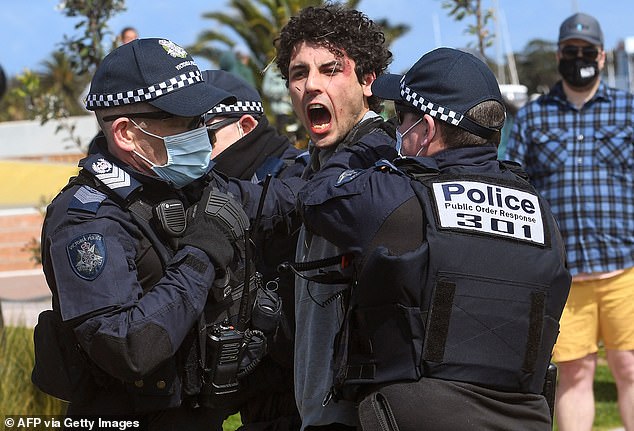 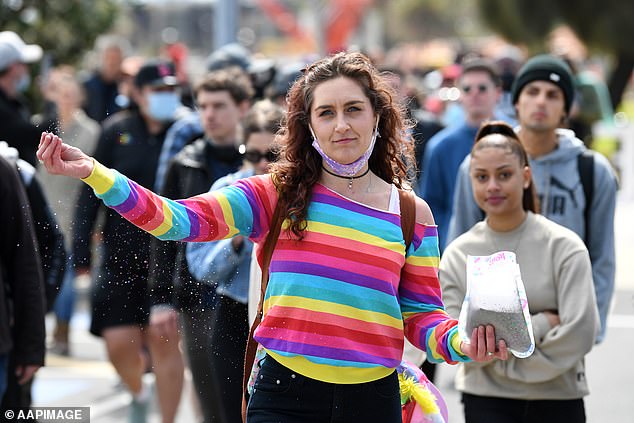 The group spilled out onto Beach Road as a police helicopter hovered above the rally and a roadblock set-up outside Luna Park.

More than 20 public response order units lined the outbound lanes as officers formed a giant wall around demonstrators along the beach.

A group of officers placed several protesters in handcuffs before they were lead away from the area. 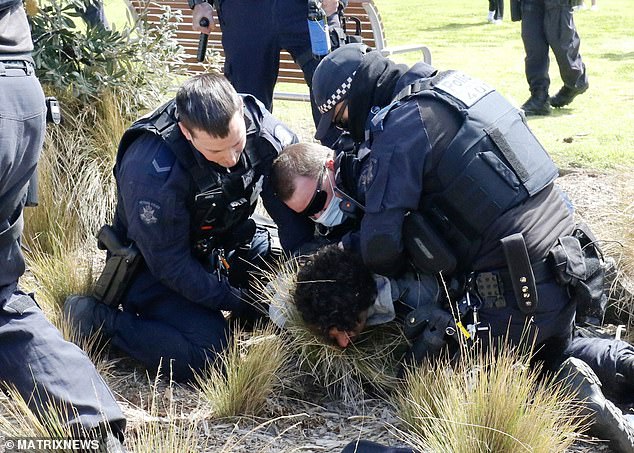 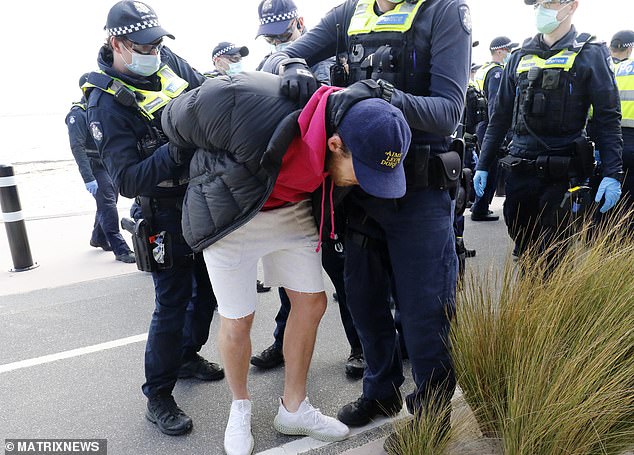 Protesters gathered in the inner beachside suburb chanting slogans like ‘together, united, we’ll never be divided’ and ‘we are not afraid’

Busloads of officers had arrived to the foreshore just before midday on Saturday after organisers summoned protesters for the ‘Millions March for Freedom’ rally.

But defiant anti-lockdown participants later conceded defeat due to the heavy police presence after days of chaos in the CBD.

Secret Telegram messages seen by Daily Mail Australia from a group run by key organisers of the demonstrations thank those involved but admit the week ended in a loss.

‘We want you to know we are so proud of everyone in our community, new and old, for their bravery to stand up for their rights in the face of such adversity,’ the message read.

‘Don’t ever forget that we made history that day. 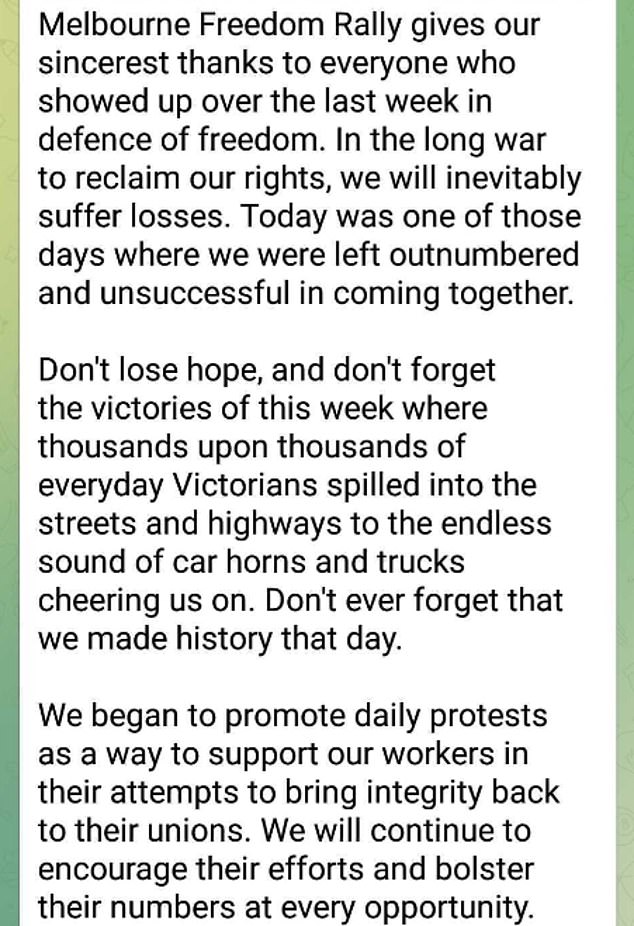 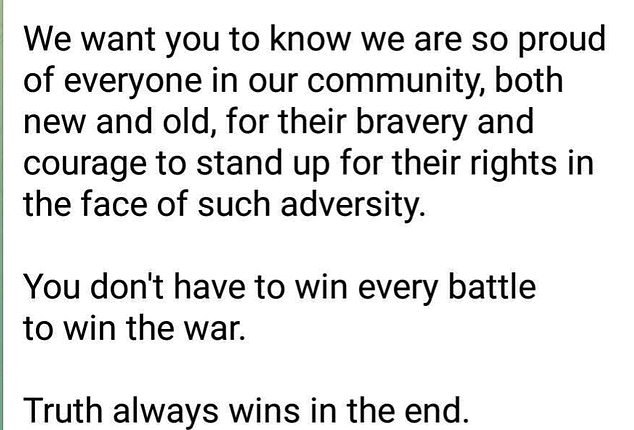 ‘You don’t have to win every battle to win the war. Truth always wins in the end.

‘We give our sincerest thanks to everyone who showed up over the last week in defence of freedom.

‘In the long way to reclaim our rights, we will inevitably suffer losses. Today was one of those days where we were outnumbered and unsuccessful in coming together.’

The violent scenes in Melbourne kicked off on Monday when construction workers angry about vaccination mandates mobbed the headquarters of the Construction, Forestry, Maritime, Mining and Energy Union (CFMEU) in the CBD.

The closure across Metropolitan Melbourne, Geelong, the Surf Coast, Ballarat and Mitchell Shire further angered workers, who marched through the city and clashed with police.

On Tuesday, seething anti-vaxxer protesters chased police and pelted squad cars with cans as rallies on the streets descended into chaos yet again.

A Channel 7 TV reporter covering the march was assaulted by a protester and also had bags filled with urine thrown at him. 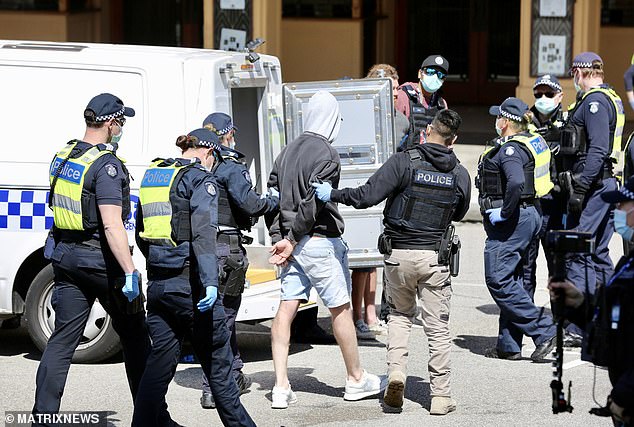 By the end of the working week, the protests were smaller in numbers in Melbourne – but arrests still followed (pictured, a man is lead away in handcuffs at St Kilda) 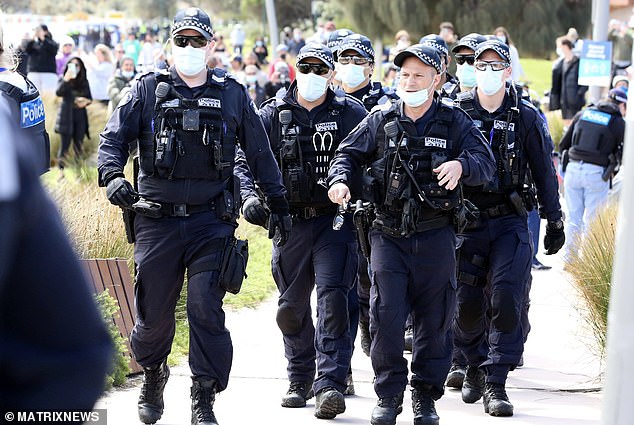 Tensions have been high all week in Melbourne’s CBD, with residents protesting mandatory vaccinations for building sector workers (pictured, a heavy police presence is seen at St Kilda beach on Saturday) 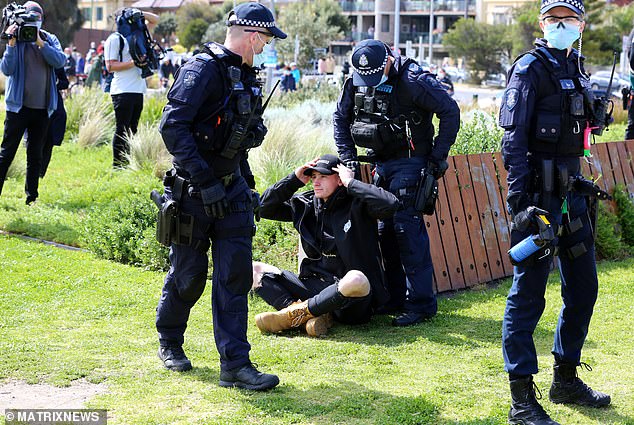 Thousands of construction workers and anti-vaxxers took to the streets – many of them distraught after tradesman Stipe Lijovic took his own life at a construction site earlier in the day.

Demonstrators then marched to block the West Gate Bridge – a major freeway into Melbourne’s CBD – which brought traffic to a standstill during peak hour.

Wednesday saw yet another protest, with one man later hospitalised with Covid symptoms after attending the rally.

By the end of the working week, protest numbers had reduced – but Covid case numbers in Victoria are surging.

The state recorded 733 new cases and one death, a woman in her 80s, from Melbourne’s northern suburbs. 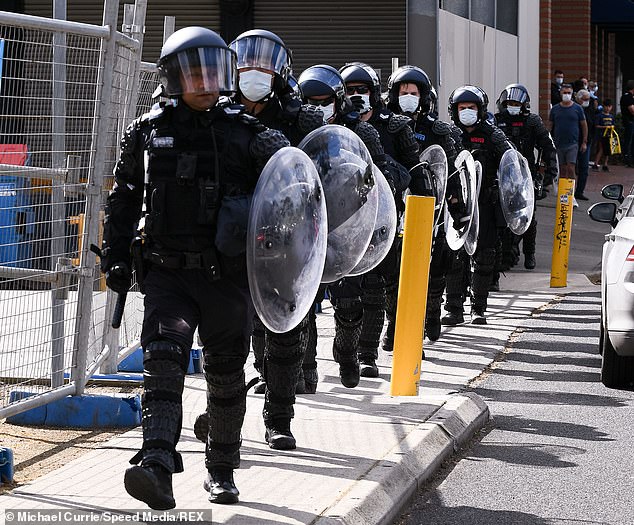 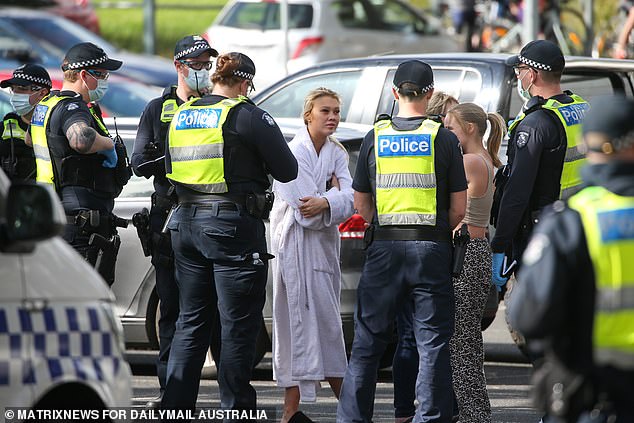 The protest in Northcote on Friday saw 31 arrests, with other people also spoken to by police (pictured)