Operation Sanctuary: Dozens of former Afghan translators and their families are set to fly to the UK to escape the threat of Taliban revenge attacks

By David Williams and Mark Nicol For The Daily Mail

Dozens of former Afghan translators and their families have been put on standby to fly to the UK and escape the threat of Taliban revenge attacks, the Daily Mail can reveal.

The interpreters who stood shoulder-to-shoulder with our troops have been told they may leave for Britain within the next 14 days, according to official documents.

It is the largest group of Afghans to be offered sanctuary in more than five years. It is also a victory for the Mail’s Betrayal of the Brave campaign highlighting the plight of former translators who feared they would be ‘abandoned’.

At least five coalition translators have been murdered this year and former UK interpreters subjected to terrifying attacks as the Taliban steps up operations. The mission to rescue the remaining interpreters and their families must be completed by mid-July when the last international troops are expected to leave.

The crucial email from the Ministry of Defence to at least 50 interpreters said: ‘We ask that you be prepared to relocate in as little as two to four weeks. Please make all necessary personal, professional, domestic and financial arrangements you need to in Afghanistan to facilitate this.

‘The process may take longer than this, but if the opportunity arises you, and your family members, should be ready to move. We will arrange accommodation in the UK but we cannot at this stage be certain where this may be. You will be entitled to some financial support in the UK while you seek employment.’

Dozens of former Afghan translators and their families have been put on standby to fly to the UK and escape the threat of Taliban revenge attacks, the Daily Mail can reveal. Last night father-of-three Hash, 37 (pictured) – one of the interpreters placed on standby – welcomed the breakthrough

Further details are set out in letters from the Afghan Threat and Risk Evaluation Unit at the British Embassy in Kabul. The offer from the British Government includes paid travel to the UK, four months of accommodation and access to ‘mainstream UK benefits’.

The interpreters will be offered a visa granting five years leave to enter the UK – with an opportunity to apply for Indefinite Leave to Remain at the end of that period.

Interpreters who are in polygamous marriages must choose which of their wives they wish to accompany them. All accompanying children must still be dependent on their parents.

The scheme is open to any Afghan whose life is at risk as a consequence of their work for UK forces. Many will need to prove such a threat exists. They must also have worked for British troops for at least a year.

The lifeline has been thrown by Defence Secretary Ben Wallace and Home Secretary Priti Patel, who have been working on these plans for months. 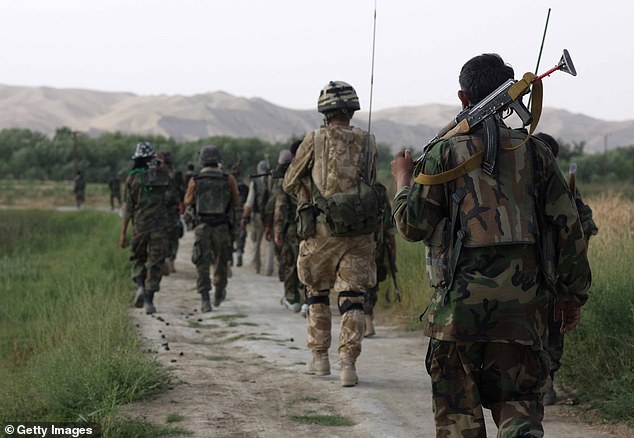 The interpreters who stood shoulder-to-shoulder with our troops (file image) have been told they may leave for Britain within the next 14 days, according to official documents

At least 30 interpreters and their families have told the Mail they can relocate, benefiting from a recent widening of eligibility criteria for the Afghan Relocation and Assistance Policy (ARAP) scheme. A further 20 are understood to have been placed on standby to move to the UK.

Last night one of the interpreters placed on standby welcomed the breakthrough.

Father-of-three Hash, 37, who served alongside UK troops in Helmand Province from 2007 to 2012, said: ‘It seems that our nightmare is finally almost over.

‘The positive news that we can finally escape the Taliban is what we have all been dreaming of while wondering if it would ever happen. We await our flight to freedom and safety. I thank Ben Wallace, the Government and the Afghan Team for this opportunity.

‘I also say a special thank you to the Daily Mail for fighting so hard for us and never giving up. You have helped save many lives.’

An Afghan who interpreted for David Cameron is also on standby. Father-of-two Mayar, 47, whose case had twice previously been rejected, has been fast-tracked after he survived a gun attack – his car was hit by 13 bullets.

He said: ‘After so much fear it is a joy to be told that in a short time we could be in England and safe. This is a great gift and recognition of the dangers we face because of our loyal service to the UK. There are many other interpreters living in fear in Afghanistan and I ask Britain to remember them too.’