Boris Johnson today refused to be drawn on the outcome of the US presidential election as he said the UK must ‘wait and see’ who wins the keys to the White House.

Donald Trump has delivered an extraordinary condemnation of the conduct of the election, demanding a halt on the counting of mail-in ballots.

The incumbent has vowed not to accept the final results, and his own children are telling his supporters to ‘fight to the death’.

But despite the tough language, Joe Biden appears to be closing in on victory, taking the lead in the crunch battleground state of Pennsylvania and a slender advantage in Georgia.

Mr Johnson declined to comment on Mr Trump’s outbursts as he insisted he has ‘every confidence in the checks and balances of the America constitution’.

He insisted he will work ‘very, very closely with whoever is the president’ as he tried to maintain impartiality.

Mr Johnson’s comments came after Downing Street had earlier refused to say that all US ballots should be counted after Mr Trump’s remarks.

A spokesman for the PM dodged all questions about the knife-edge contest, saying it was a matter for the ‘relevant authorities’. 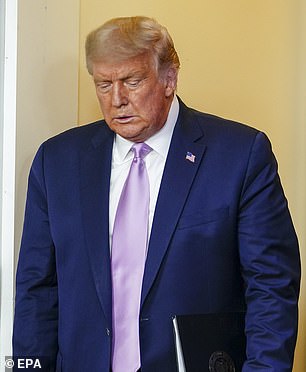 A spokesman for Boris Johnson dodged all questions about the knife-edge contest between Donald Trump (right) and Joe Biden (left), saying it was a matter for the ‘relevant authorities’ 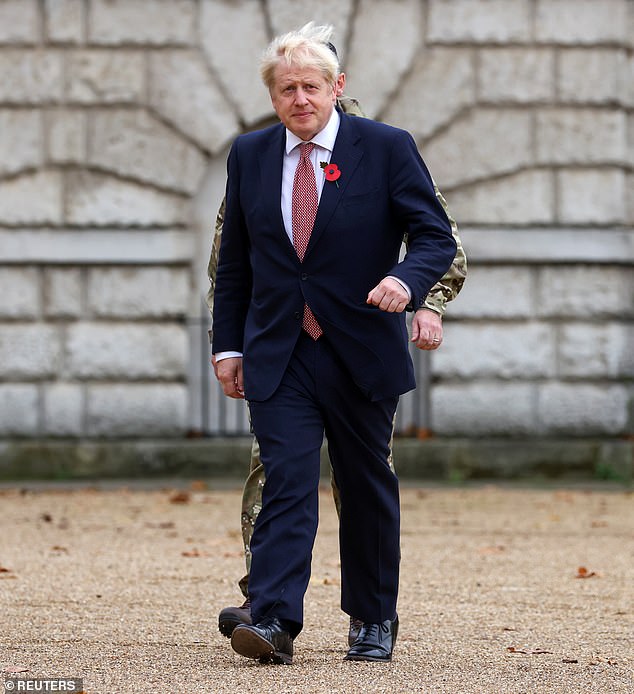 Asked repeatedly if the UK wanted the count to continue, a spokesman for Boris Johnson (pictured in Westminster today) said: ‘That is a matter for the US.’

In a statement this morning, Mr Trump’s campaign team said the election was ‘far from over’. They said it was a ‘false projection’ that Mr Biden would win.

Mr Trump’s reluctance to accept the outcome poses an unprecedented scenario for the country and the world.

It will make Mr Biden’s transition to power, should he win enough electoral college votes to secure the White House, more difficult.

ABC, CBS and NBC cut away from the press conference before it finished, warning their viewers that Mr Trump had made ‘a number of false statements’ that needed clarifying.

MSNBC was the first to cut away, as anchor Brian Williams warned ‘here we go again’. Fox News and CNN covered it in full.

In a series of tweets sent at 2.30am, Mr Trump continued his tirade – attacking social media regulation, making baseless claims of fraud, casting doubt over several close Senate races, and calling on the Supreme Court to intervene.

Mr Johnson this afternoon would not be drawn on Mr Trump’s comments as the PM told Sky News: ‘If I were a voter in America I don’t think I would want anybody in another government commenting on my election, our election in our country.

‘I think while the votes are being counted we should wait and see and I have every confidence in the checks and balances of the America constitution.’

Asked whether he will miss Mr Trump if he does lose the race, Mr Johnson replied: ‘Let’s be clear, the prime minister of the United Kingdom is always going to work very, very closely with whoever is the president of the United States and that is going to be the case whatever the outcome of this election.

‘I repeat my point: I don’t think at this stage you would expect any foreign, international leader to comment on the democratic processes of a very friendly country. That is just not what we do.’

Earlier, the PM’s Deputy Official Spokesman was asked whether the UK had seen any evidence of election fraud in the US.

The spokesman said: ‘We have confidence in the checks and balances of the US system. The count is ongoing. You wouldn’t expect us to speculate on the outcome.

‘It is important that the US electoral process is given time to reach a conclusion. We are of course watching closely.’

Asked repeatedly if the UK wanted the count to continue, the spokesman said: ‘That is a matter for the US.’

He added: ‘The electoral process is a matter for the relevant US authorities and we have confidence in the checks and balances of the US system.’

In contrast, Irish premier Micheal Martin has said that every vote in the US presidential race should be counted.

‘Every vote should be counted and has to be counted,’ the Taoiseach told Sky News.

‘I admire what is happening and I have watched it with great interest over the last number of days, the organisation of the vote and the attention to detail and the affirmation by those responsible for the counts that every thing possible is being done to ensure the integrity of the vote.

‘I think it is worth watching and it’s very important that, as broadcasters have stressed, the need to count every vote and make every vote count.’

Having narrowly won the swing states of Wisconsin and Michigan, Mr Biden has more routes to the White House open to him – with Nevada, Arizona, Pennsylvania, Georgia and North Carolina yet to be called.

A win in Pennsylvania would hand him the presidency even if all the other states go to Mr Trump. Holding his lead in Arizona and Nevada would also hand him the win.

Meanwhile, Mr Trump needs most of the outstanding states to go his way to stand a chance of winning.

Mr Biden also gave a speech early this morning calling for calm and patience while the votes are counted, insisting once again that when the dust has settled he will have beaten Mr Trump.