Downing Street is anxiously awaiting the US election verdict as Dominic Raab admitted there are different ‘opportunities and risks’ depending who wins.

The result of the race for the White House is on a knife edge with Donald Trump and Joe Biden both voicing confidence that they will emerge victorious.

Biden’s failure to land a knockout blow by taking Florida, Ohio or Texas means that the race is coming down to Pennsylvania, Michigan and Wisconsin – the ‘blue wall’ that Hillary Clinton lost in 2016.

But it will take days to determine the results from those states, setting the scene for a battle which was headed to the courts.

In a round of broadcast interviews this morning, Mr Raab said the outcome was closer than many pundits had expected.

But he insisted he was confident the ‘checks and balances’ in the US system would deliver a result in the end.

In a round of broadcast interviews this morning, Dominic Raab said the outcome was closer than many pundits had expected

Mr Raab told Sky News: ‘We’ll see how this plays out, I think it could be a very close race.

‘We may not get a definitive result for hours, if not days.

‘But we are totally confident the American system has the checks and balances to give us a definitive result and we will wait and see.

‘Of course, the UK-US relationship is in great shape and we are confident that it will go from strength to strength whichever candidate wins the election.’

‘Depending who is in the White House there is always slightly different contours of the opportunities and risks for the relationship.’

However, he insisted the ‘bedrock’ of the relationship was strong.

Boris Johnson has formed a strong link with Mr Trump, who has been very enthusiastic about the prospects for a Transatlantic trade deal.

Meanwhile, the Democrats have struck a more negative tone.

In an extraordinary White House statement, Mr Trump claimed the election was a ‘fraud on the American people’ and that he was going to the Supreme Court to stop all vote counting immediately.

He effectively declared victory, saying: ‘Frankly we did win this election.’

He set the stage for a titanic struggle with Joe Biden over the millions of ballots which are still to be counted and which might not be fully counted until as late as Friday.

Biden had been first to speak, just after midnight, saying ‘it ain’t over till every vote is counted,’ in an address from Wilmington, Delaware.

Trump tweeted immediately to accuse Biden of fraud and say he was ‘winning BIG’ and would make his own statement.

‘Votes cannot be cast after the Poles are closed!’ he tweeted from the White House residence – spelling polls incorrectly, but making clear that the battle will be over late-arriving mail-in ballots. 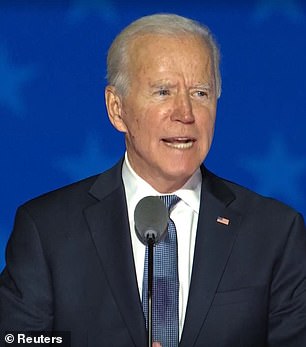 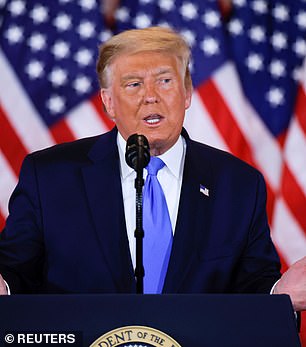 Joe Biden made a speech just after midnight Tuesday asking Americans to be patient and claiming he would eventually be the victor despite failing to land knockout blows in Florida, Ohio and Texas 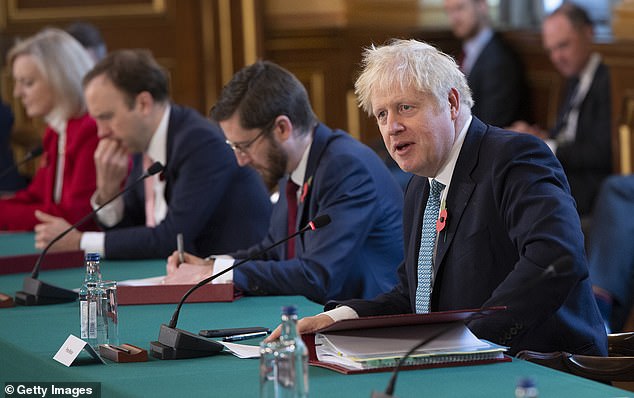 Boris Johnson has formed a strong link with Mr Trump, who has been very enthusiastic about the prospects for a Transatlantic trade deal