Stocks ended mostly lower on Wall Street Monday despite an early surge buoyed by the launch of a nationwide COVID-19 vaccine campaign.

The Dow Jones Industrial Average hit a record high before ending lower, weighed down by Walt Disney. It fell 0.62% to end at 29,859.97 points.

‘While the entire market is pleased, is optimistic, is bullish about the arrival of the vaccine this morning into the U.S., I think the average investor is realizing that this roll-out, this distribution of the vaccine is not going to be a silver bullet, is not going to go as fast as one hopes,’ said Jake Dollarhide, chief executive officer of Longbow Asset Management in Tulsa, Oklahoma.

U.S. stock indexes had wavered between small gains and losses Monday as the country’s first vaccinations against COVID-19 were administered.

Hospital workers are unloading the first batches of a coronavirus vaccine developed by Pfizer and its German partner, BioNTech, following its approval for emergency use by U.S. regulators.

Investors are also waiting to see if government officials can deliver any progress on separate negotiations happening in Washington regarding COVID relief. If successful, the talks could give markets a further boost.

Stocks ended mostly lower on Wall Street Monday despite an early surge buoyed by the launch of a nationwide COVID-19 vaccine campaign. The S&P 500 gave up earlier gains of almost 1% and lost 0.44% to 3,647.33 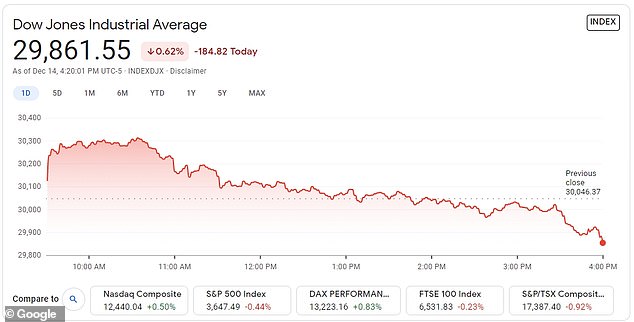 The Dow Jones Industrial Average hit a record high before ending lower, weighed down by Walt Disney. It fell 0.62% to end at 29,859.97 points 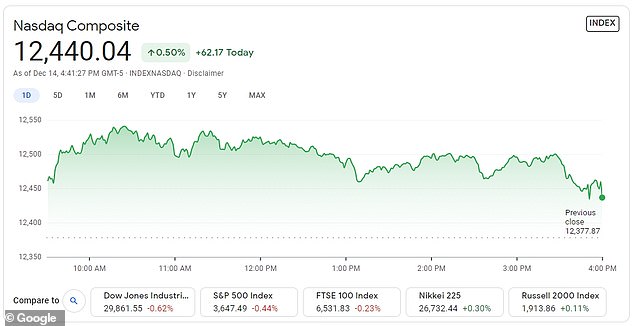 The largest vaccination campaign in US history is now underway with an intensive care nurse in New York among the first to receive a COVID-19 shot Monday morning as the death toll from the virus neared 300,000.

Nurse Sandra Lindsay received the Pfizer shot at the Long Island Jewish Medical Center in Queens just before 9.30am this morning during a livestream with New York Gov Andrew Cuomo.

‘The market is really looking ahead six months and, now that the vaccine is being rolled out, hope has become reality,’ Marc Chaikin, founder of Chaikin Analytics, had said. 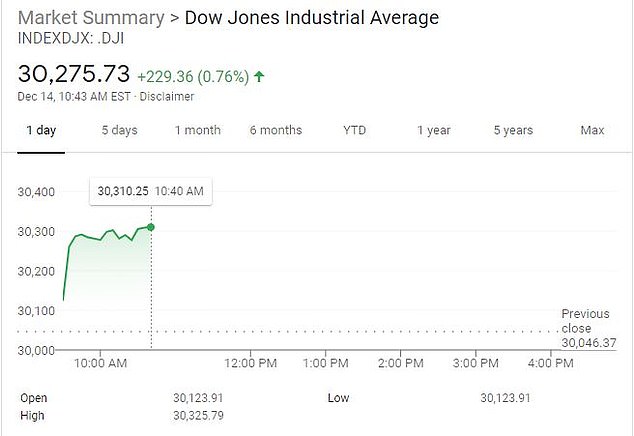 The Dow Jones Industrial Average had risen 195 points, or 0.65%, in the opening minutes 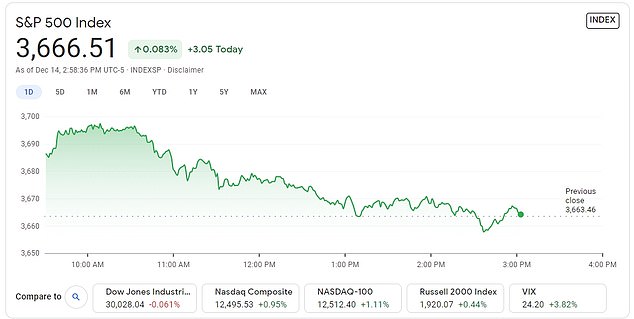 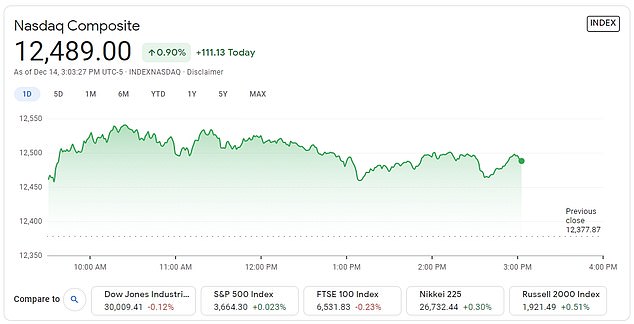 Such optimism has helped Wall Street’s rally broaden out beyond Big Tech stocks, which were pulling the market higher almost singlehandedly earlier in the pandemic.

Many of the stocks that had been climbing Monday included companies that desperately need the economy to get healthier and reopen.

Smaller companies had also been rising more than their larger rivals, an indication that investors are feeling more confident about the economy’s prospects. 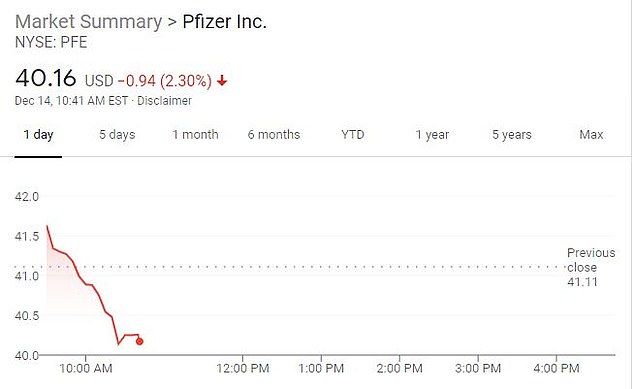 The FDA granted emergency use for the vaccine produced by Pfizer Inc. and its German partner BioNTech Friday. The decision kicks off a massive vaccination effort to help defeat the pandemic 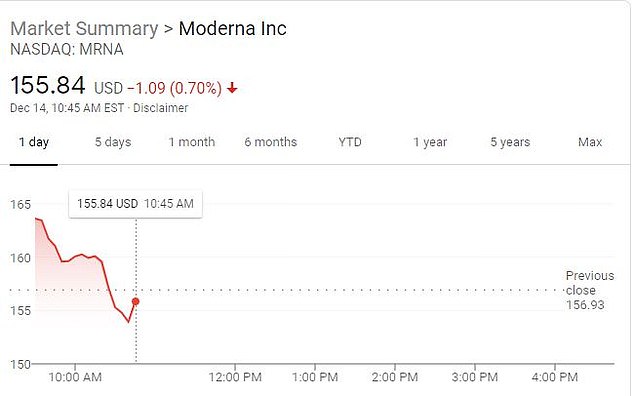 Moderna Inc said on Friday the U.S. government will get an additional 100 million doses of its COVID-19 vaccine candidate, expected to be delivered in the second quarter of 2021 if authorized

Health care workers and nursing home residents will be first in line for vaccinations, and the hope in markets is that a wider rollout next year will help pull the economy back toward normal following its devastation this year. 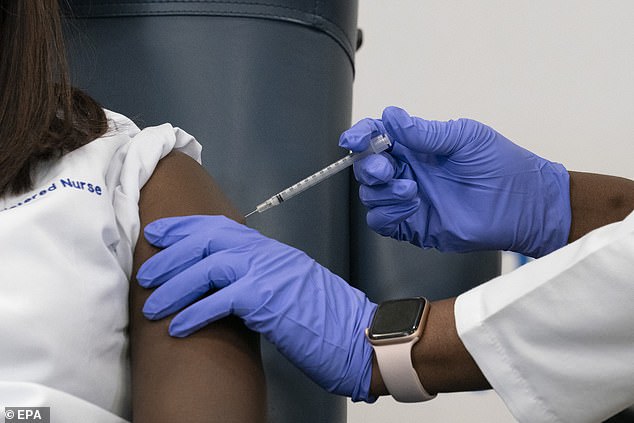 The largest vaccination campaign in US history is now underway with an intensive care nurse in New York among the first to receive a COVID-19 shot this morning as the death toll from the virus neared 300,000

Of course, the hopes for the economy in the future are tempered by the worsening pandemic in the present.

Surging coronavirus counts have forced a downshift to the economy’s momentum, including last week’s worse-than-expected report on joblessness.

The increasing death toll is pushing governments around the world to bring back varying degrees of restrictions on companies, and it’s also scaring potential customers away from businesses on its own.

To help in the interim, economists and investors have been asking Congress to deliver another round of financial support for the economy. 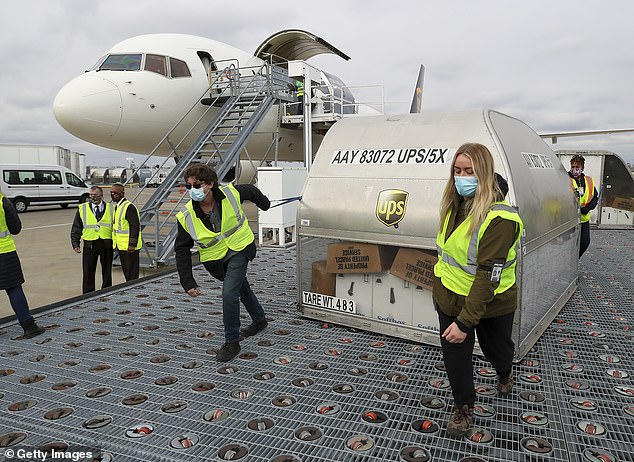 The first shipments of Pfizer Inc’s COVID-19 vaccine for widespread use began arriving around the United States on Sunday evening. Pictured: Workers unload boxes of the vaccine from a plane at a UPS logistics center in Louisville, Kentucky

Democratic and Republican legislators have been discussing a bipartisan possibility, which has raised hopes on Wall Street recently. But bitter partisanship has prevented a deal for months, and a deep divide still dominates on Capitol Hill.

Across the Atlantic, hope was rising that talks are making progress in what has been just as frustrating as the stalemate in Washington, a potential deal on the terms of the United Kingdom’s exit from the European Union.

Hope for a deal helped the value of the British pound rise against other currencies. In European stock markets, France’s CAC 40 rose 0.7%, and Germany’s DAX returned 1%. The FTSE 100 in London was virtually unchanged.

In another sign of improving confidence in the economy, the yield on the 10-year Treasury rose to 0.92% from 0.87% late Friday.

‘The market is prepping itself for a really good year in 2021 with earnings starting to kick in during the second and third quarter,’ Chaikin said.