There are fears of violence in Dover as rival far-right and pro-migrant groups are expected to assemble to demonstrate over migrant crossings.

Protesters are set to gather in the town on Saturday amid a heavy police presence.

Both pro- and anti-immigration activists have announced their intention to gather in the Kent port, despite a plea from local MP Natalie Elphicke to ‘stay away’.

Anti-racist group Hope Not Hate has raised concerns there will be violence and that splintered elements of the British far-right may travel to Dover.

Dover MP Natalie Elphicke has urged people to stay away from the protests given the backdrop of the Covid-19 pandemic.

She said: ‘People are rightly angry about the number of people breaking into Britain in small boats. It is completely unacceptable.

‘But a protest in Dover in the middle of a pandemic is not a sensible or responsible thing to do. We cannot risk a second wave – protesters should stay away from Dover this weekend.

The Kent town saw ugly clashes in 2016 when rival protest groups assembled to demonstrate over immigration.

Pictured: Clashes as anti-immigration groups including the National Front (NF) and the English Defence League (EDL) protest in Dover in 2016. There are concerns that similar scenes could be seen over the weekend in the border town 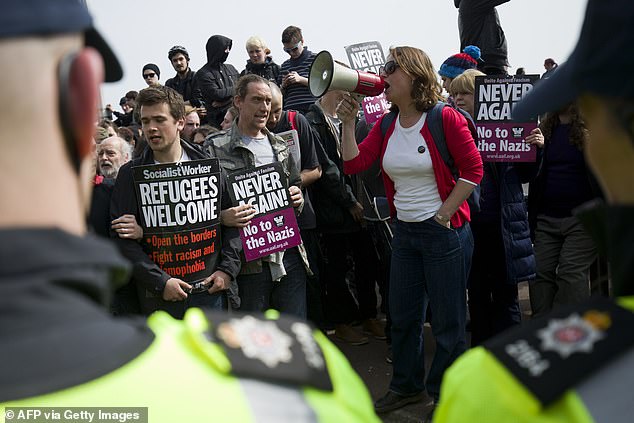 Pictured: Anti-racism demonstrators chant slogans and hold placards as they block the route of a planned far right march in Dover in 2016 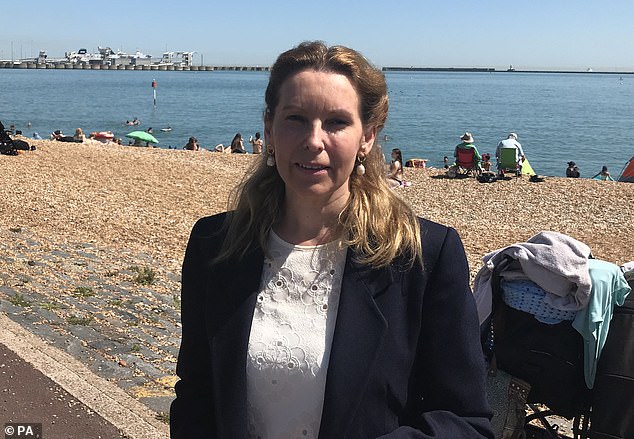 Dover MP Natalie Elphicke, pictured in August, has made a plea to those planning on protesting in Dover to ‘stay away’ amid the coronavirus pandemic

A gathering organised by Kent Anti Racism Network is scheduled to take place from 11am in Market Square.

The group said: ‘Kent Anti Racism Network is a collective of people from all political and organising backgrounds with one common goal: to combat racism and racists in our community.

‘This weekend symbolises this struggle, and we encourage all good people in the local community to come down and stand with us in support of those arriving on our shores, in the way that Kent did so proudly when welcoming refugees after World War 2.’

Meanwhile a demonstrator who goes by the name The Little Veteran on social media is calling on people to ‘shut the port down for days’ in protest against migrant crossings.

In a video posted on YouTube, he distanced himself from other groups who may come to the port and called for a peaceful demonstration.

Instead he called on people to drive slowly along roads and block harbour entrances with boats.

The protest comes days after a record 416 migrants in 28 boats reached the UK. So far this year, at least 5,586 refugees have crossed the Channel by boat. 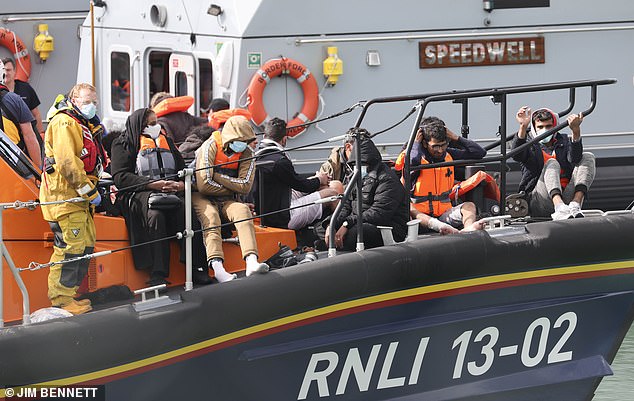 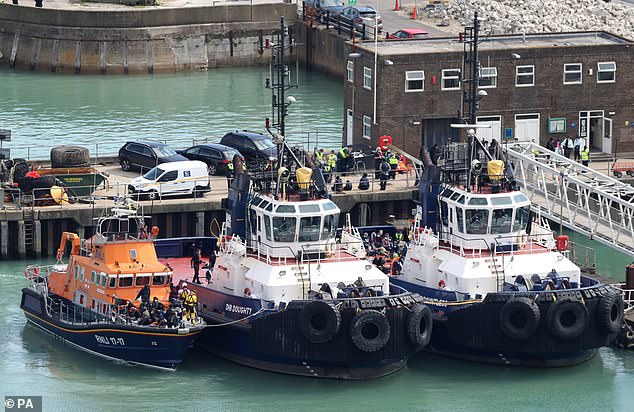 Pictured: A group of people thought to be migrants are brought into Dover, Kent, by the RNLI following a small boat incident in the Channel on Wednesday

Concerns have been raised by anti-racist group Hope Not Hate that far-right groups will make the trip to Dover on Saturday.

Dr Joe Mulhall, head of research at Hope Not Hate, said there had been a build-up of anger among the far-right as migrant crossings have continued.

He said: ‘It’s one that has a potential for popular support so a lot of the grifters on the far-right are not going to let an opportunity like this go by.

‘There’s a danger that there will be violence, Dover has a history of that.’

In 2016, 13 people were arrested and six injured after far-right brawled with hundreds of anti-fascist campaigners.

Yobs pelted the anti-fascists with metal poles and bottles – and they hit back by launching bricks. One person suffered a broken arm in the fracas.

Two coaches at a nearby service station had swastikas painted on them in blood. 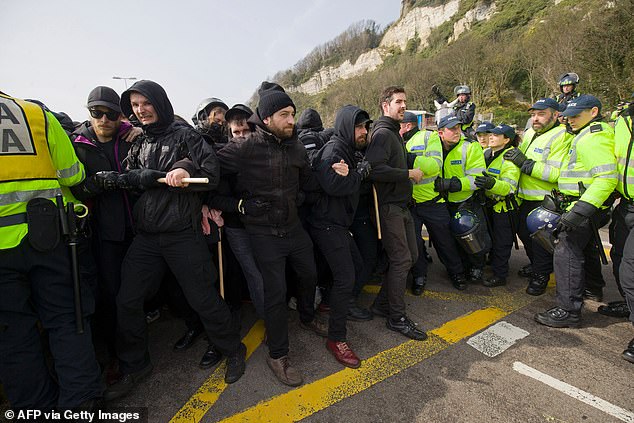 Pictured: Police try to clear the road of anti-racism demonstrators attempting to block the route of a planned far right march through Dover in 2016

Dr Mulhall said the anti-racist protest in Market Square could be a ‘possible flashpoint’ for tensions.

However he says Hope Not Hate are ‘less fearful’ than they were a few days ago, with some far-right elements not expected to make the trip.

Police are still trying to establish how many people are going to be involved in protests and have announced a ‘significantly increased’ police presence will be in place.

Chief Superintendent Nigel Brookes, of Kent Police, said: ‘As a force, it is our responsibility to facilitate peaceful protests, however we will not tolerate violence or disorder.

‘Anyone planning to visit Dover with the intention of committing offences should be aware they are not welcome here and that we will seek to prosecute anyone who breaks the law. 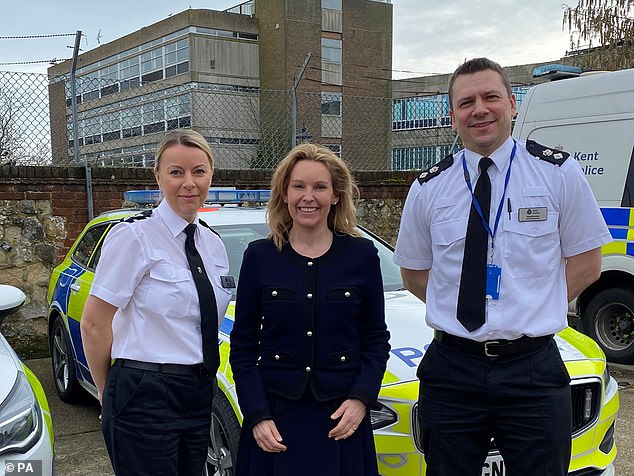 ‘We always urge organisers to work with us beforehand to ensure their actions are not undermined by anyone who may seek to attend such an event simply as an excuse to commit acts of violence and disorder.

‘Whilst we respect the right to protest peacefully our aim will be to balance that right with the rights of other people in the town.

‘The public should be assured that we have a great deal of experience dealing with protests and will use officers specially trained to deal with events of this nature.

He went on to echo Elphicke’s comments, saying that anyone planning to attend the protest should consider the risks posed by the virus.