This is the heartbreaking moment an elephant lost its month-long battle for life despite Thai medics performing CPR in a last-ditch effort to save the dying animal.

The 20-year-old bull elephant, named Plykhanoon, has been in critical care since December 10 after it was found shot 43 times in woodland in Prachuap Khiri Khan, a province in southern Thailand.

Veterinarians had taken the elephant to a wildlife sanctuary for treatment where it tragically crushed a park ranger to death with its trunk while being treated.

Despite that, vets kept battling to save the animal for another month before it suddenly fell into critical condition as it was being transported for surgery.

An elephant found shot 43 times in the face, legs and body in Thailand has died after a month in critical care – as tragic video captured the moment it lost its battle for life (pictured) 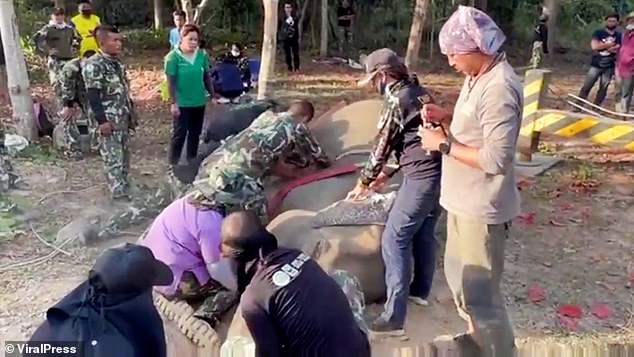 The elephant was discovered badly wounded in woodland on December 10 and taken to a nearby wildlife sanctuary, where it lost its battle for life on January 10

The bull elephant had been shot twice under the eyes, three times on the front leg, twice on the ribs, and 38 times across its face and body when it was found.

Despite being critically-injured with bullet shell casings still inside its body, the frightened elephant resisted rescuers and had to be sedated before being transferred to the nearby Kui Buri National Park.

A day later, a park ranger was killed after being crushed by the elephant’s trunk while trying to treat the three-tonne jumbo.

One of the park rangers, Pichai Watcharapongpaiboon, said his colleague was a hero.

He said: ‘The elephant had violent tendencies so we understand it was only trying to protect itself when it accidentally killed the ranger.’

The elephant has spent the past month receiving treatment at the National Park’s head office by a team of vets. 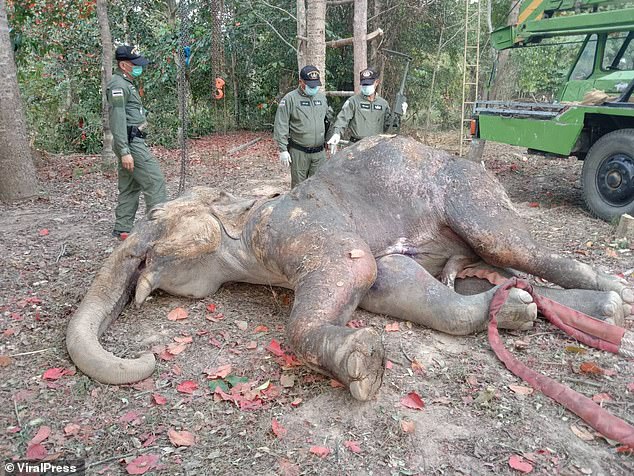 Veterinarians had battled to save the elephant despite the wounded animal crushing a park ranger to death with its trunk during treatment (pictured, the animal after its death) 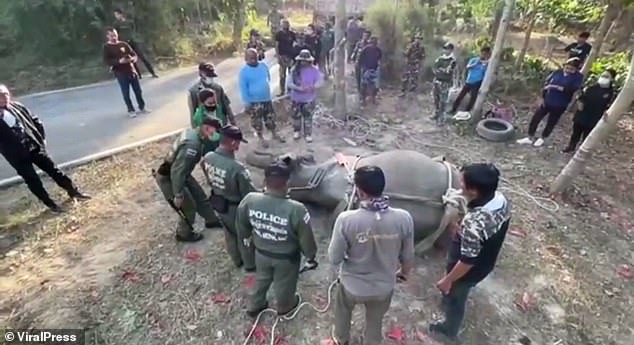 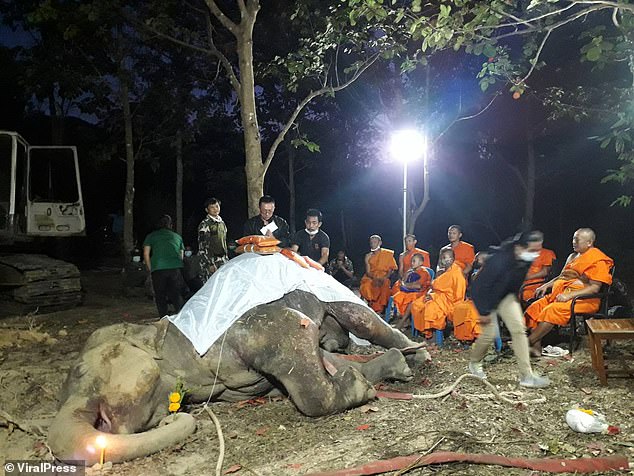 Suporn Polpan, the head of Kui Buri National Park, said they did everything they could to save the jumbo. Pictured: Locals grieve over the death of the elephant and lay candles and flowers by the animal

But this weekend, the elephant’s condition suddenly deteriorated and shocking footage shows the moment veterinarians were frantically giving the jumbo CPR.

Despite the best efforts of the National Park’s veterinarians to save the injured elephant, the animal finally succumbed to his injuries and died on Sunday as a result of organ failure.

Suporn Polpan, the head of Kui Buri National Park, said they did everything they could to save the jumbo.

‘The elephant was admitted on December 10 and was being cared for by the veterinary hospital inside the Kui Buri National Park. His behaviour was aggressive and he did not heal from the injuries from the bullets,’ Mr Polpan said.

He added: ‘The elephant was being moved for treatment to the park office where the vets are on hand when it had an unexplained swelling in the right leg and could not stand on January 10. 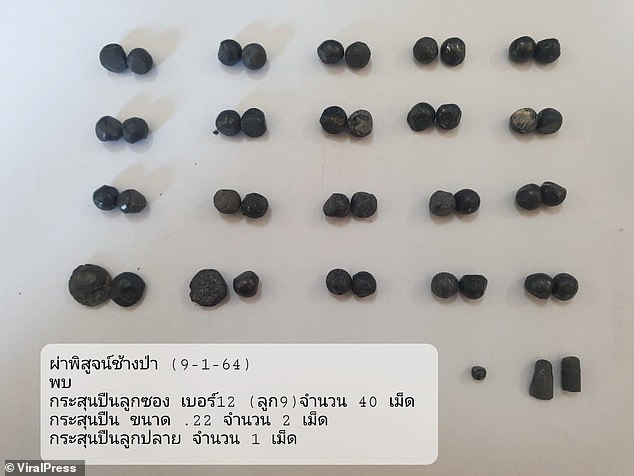 The elephant had been shot twice under the eyes, three times on the front leg, twice on the ribs, and 38 times across its face and body. Pictured: Bullets retrieved from the animal’s body 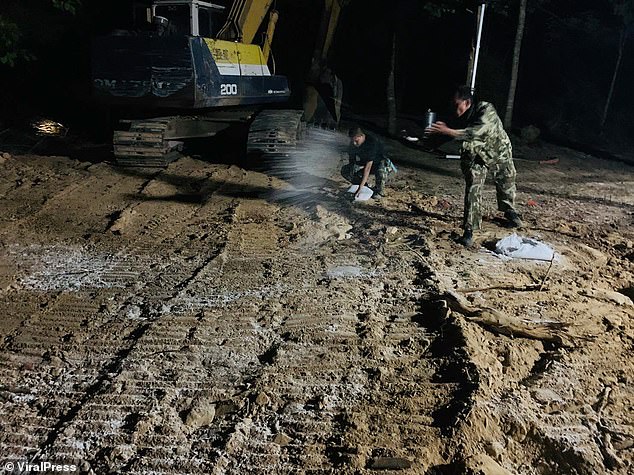 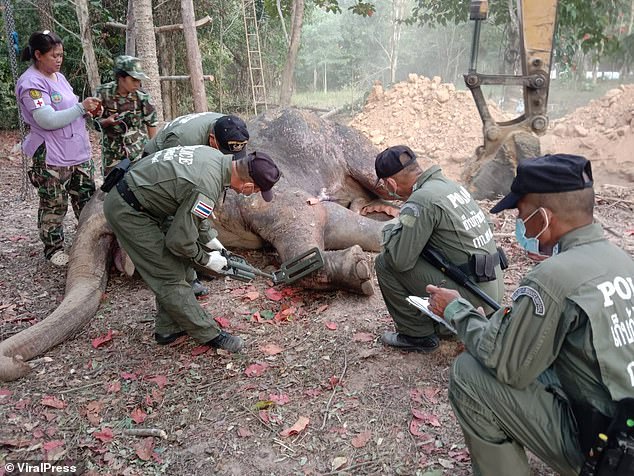 After its death, police from examined the dead elephant with a metal detector to check for any further bullet cases

‘An autopsy assumed the cause of death to be caused by internal organs failure.’

Officers are still investigating who shot the elephant but they believe that it had an encounter with several armed men who opened fire at the same time.

After its death, police from examined the dead elephant with a metal detector.

The elephant was buried in the national park grounds while investigations are ongoing.

The elephant is the national animal of Thailand. An estimated 2,000 elephants are living in the wild in Thailand and a similar number in captivity.

There is conflict when they come in contact with humans who also use the area for farming and gathering food.

Elephants are a protected animal in Thailand and killing them carries a maximum prison term of up to three years and a fine of 1,000 baht (£25).

Wildlife rangers are now working with police to find those responsible for the death.