Prince William was the picture of fatherly pride as he took his daughter Princess Charlotte to the Commonwealth Games yesterday.

The Duke of Cambridge, 40, doted on his seven-year-old daughter as they took in the action at the swimming, hockey and gymnastics alongside the Duchess of Cambridge, 40.

Charlotte was on her very best behaviour as she joined her parents for her first royal engagement without her brothers George, nine, and Louis, four.

The little princess shook hands with dignitaries, smiled for photographs, and cheered on the athletes, all under the watchful eye of her parents.

When the long day out started to get to much, Princess Charlotte began to get a little restless. But her doting father was on hand to reassure her with cuddles and small acts of affection, like tucking her hair behind her ears.

The sweet moments between father and daughter were noted by royal fans who praised their genuine bond.

One tweeted: ‘He is a wonderful dad. Another posted: ‘Love this natural interaction of Papa and daughter.’ A third added: ‘Sweetheart Charlotte loves her papa William.’

The excitement of the day appeared to threaten to overwhelm seven-year-old Princess Charlotte (pictured, centre) at times, and she was snapped with her head in her hands 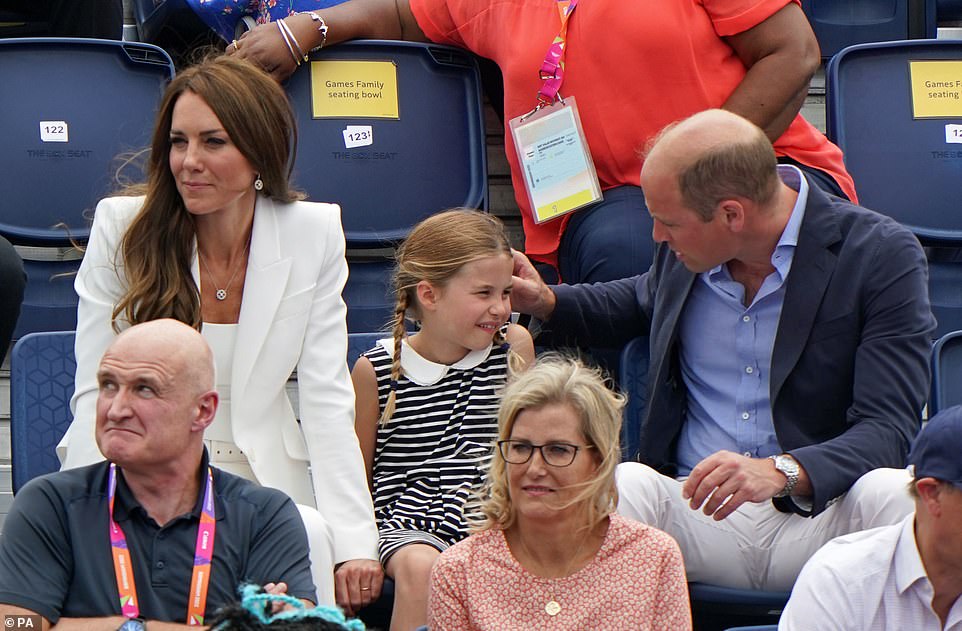 However, her father Prince William, 40, (pictured, right) was seen leaning over to talk to his daughter, and gently touching her hair and chatting to her 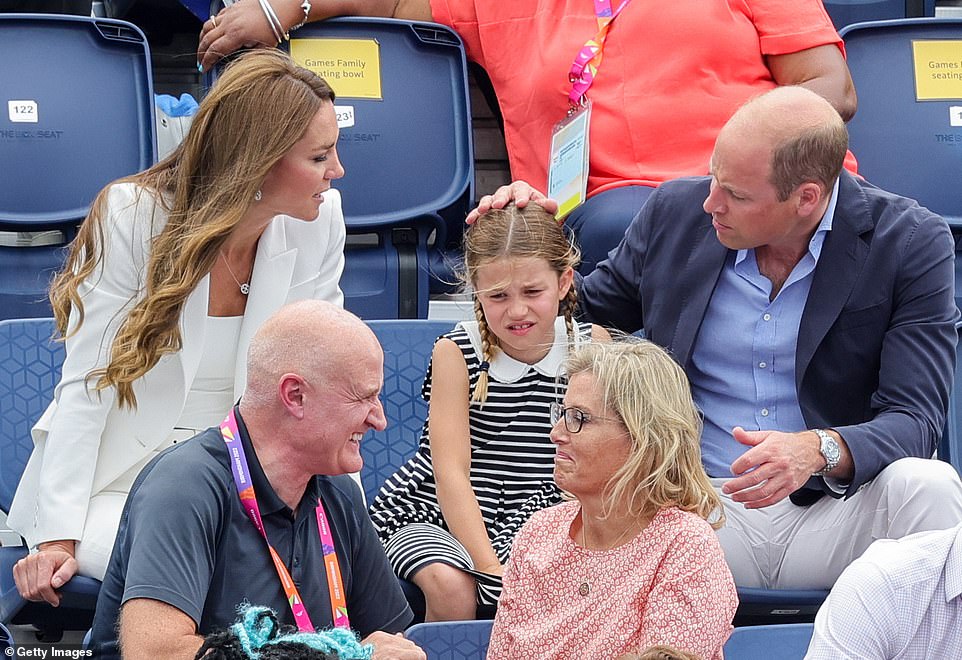 The outing, which saw Charlotte (centre) attend the Commonwealth Games with her parents Kate Middleton (left) and Prince William (right) marked the first time Charlotte has made a public appearance without her brothers Prince George, 8, and Prince Louis, 4 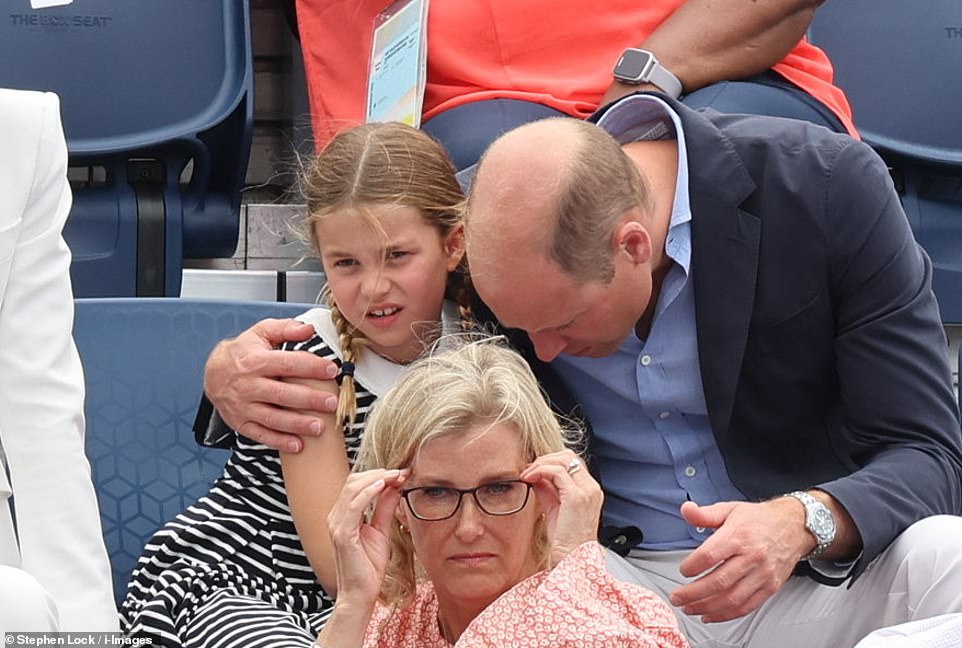 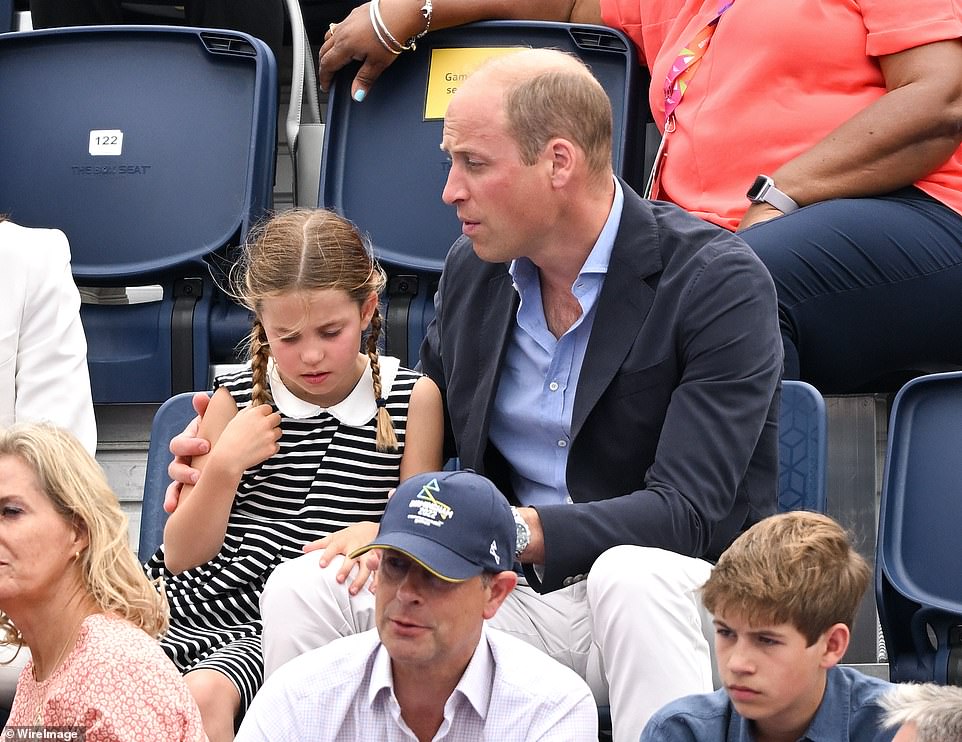 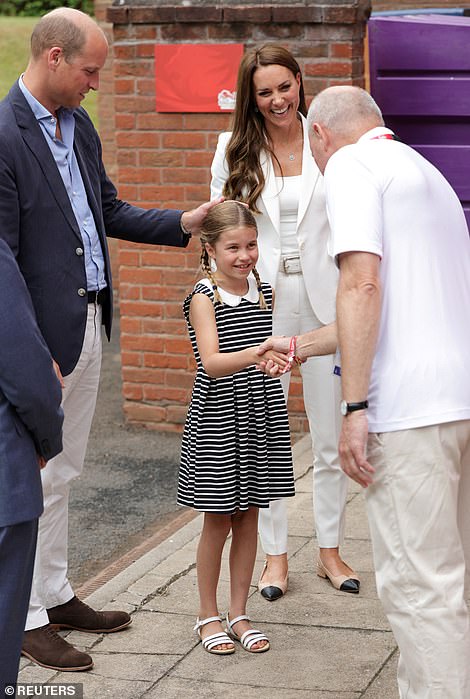 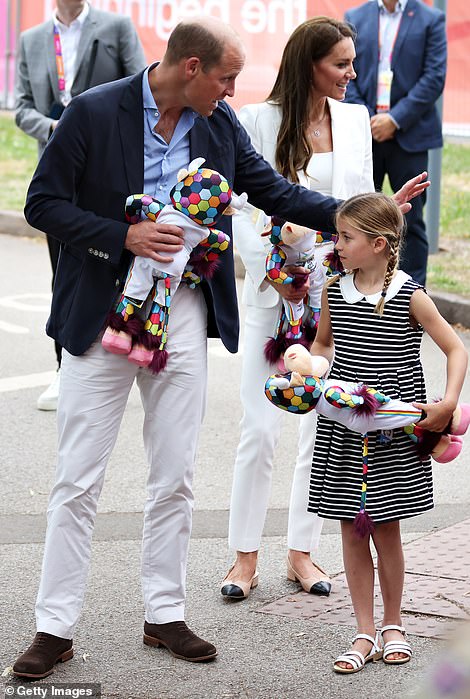 Watching over her: Prince William kept a close eye on his daughter as they carried out their engagements on Tuesday 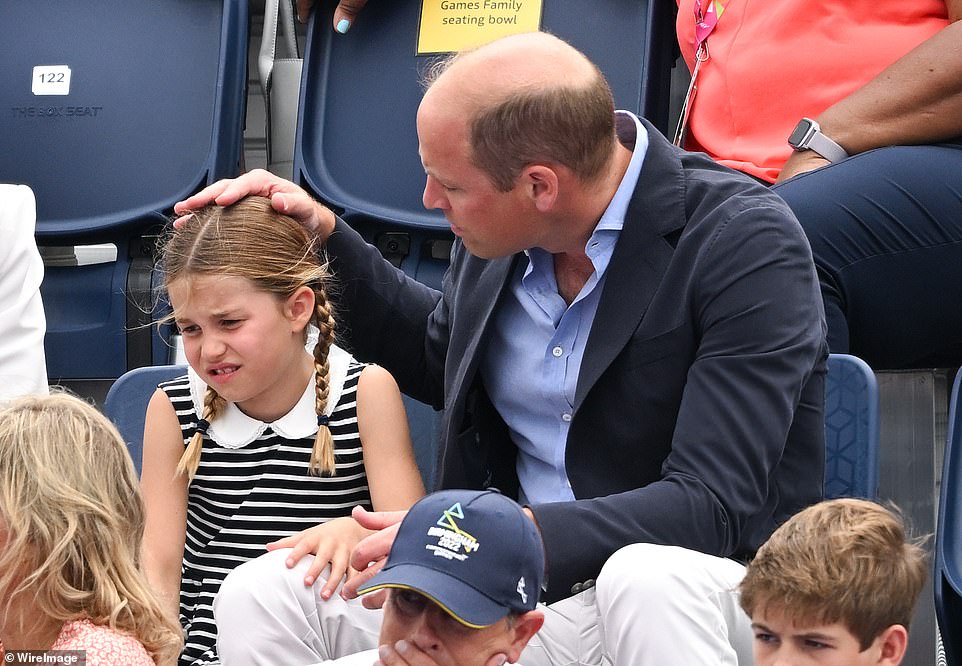 During the trip, the trio were snapped cheering on swimmers at the Sandwell Aquatics Centre. They also attended a hockey match, where the excitement of the day seemed to overwhelm the young royal a little.

Photographs show the princess, who was wearing a £44 Rachel Riley dress, looking a little tired as she sits with her head in her hands. Luckily, Prince William was on hand to comfort his daughter.

The Duke was snapped tenderly moving a lock of his daughter’s hair out of her face while he spoke to the youngster.

Another image shows William cradling the back of Charlotte’s head in his hand, as her mother Kate Middleton joins the conversation.

Despite looking a little tired at times, the seven-year-old was also snapped enjoying the activity during the day.

Charlotte, who is thought to be a big sports fan, and who last week joined her father in creating a video message for the Lionesses ahead of their Euro 2022 final, seemed animated at times as she watched the action.

At another event during the day, she sat next to the Duchess, who wore her £1,945 white Alexander McQueen trouser suit for the outing, as they watched some swimming.

The youngster was seen clapping, sticking out her tongue and gasping at moments of action, as Kate appeared to be explaining the action to her.

As the Cambridges got up from their seats to leave the Aquatics Centre, a beaming Charlotte was seen making a thumbs-up gesture to William. 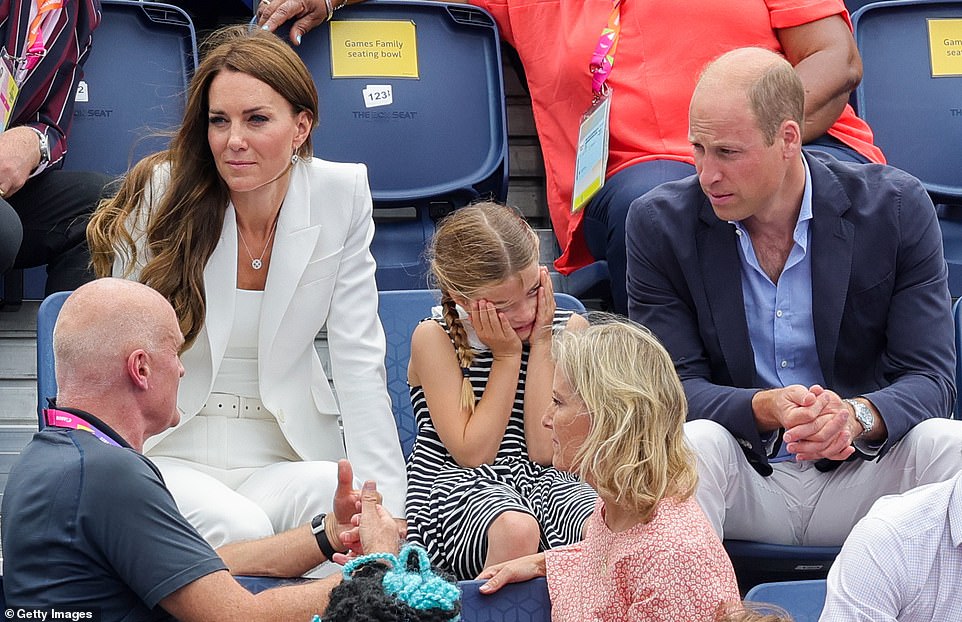 Prince William (right) watches on as Princess Charlotte wipes her face with her hands, as she watches a hockey match with her parents 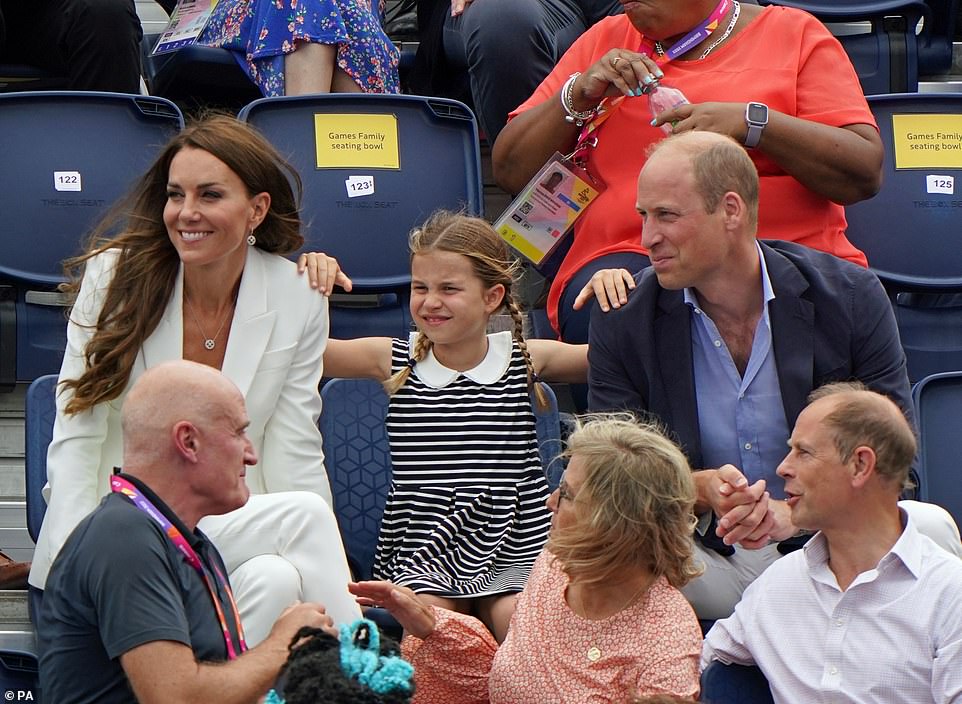 At one point, the seven-year-old was seen putting her hands around the shoulders of Kate Middleton (left) and Prince William (right) 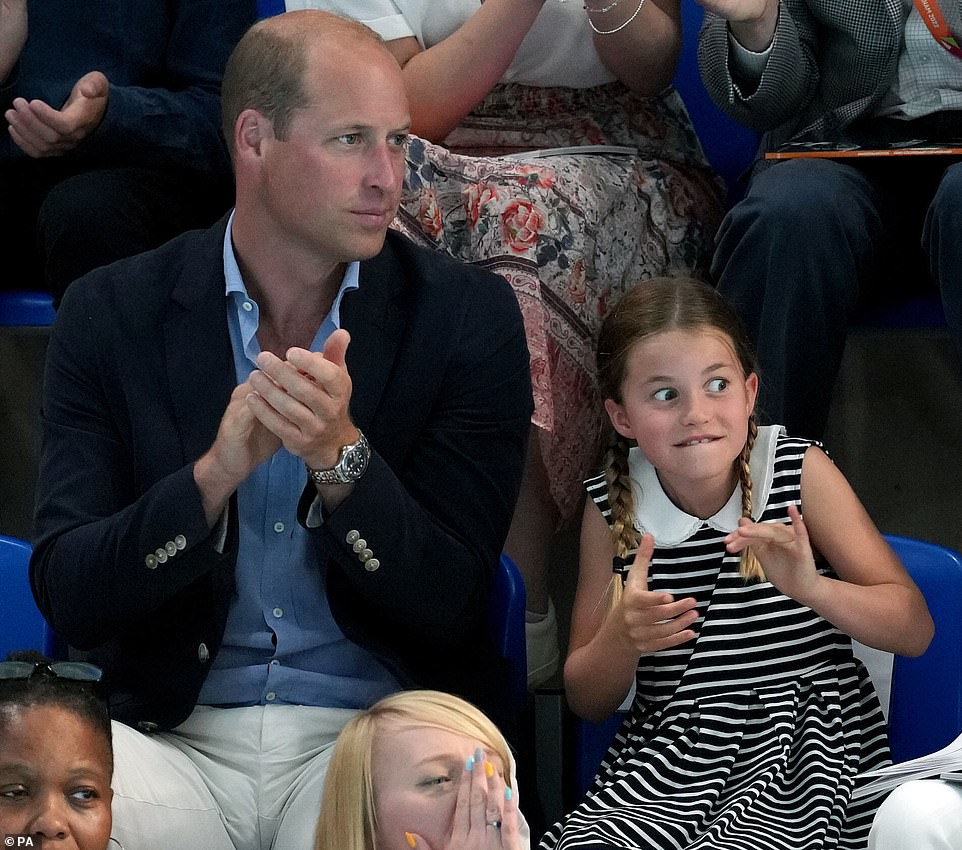 Feeling tense! Princess Charlotte bit her lip as she and her parents, Kate and Prince William, gave a round of applause at the event in Birmingham 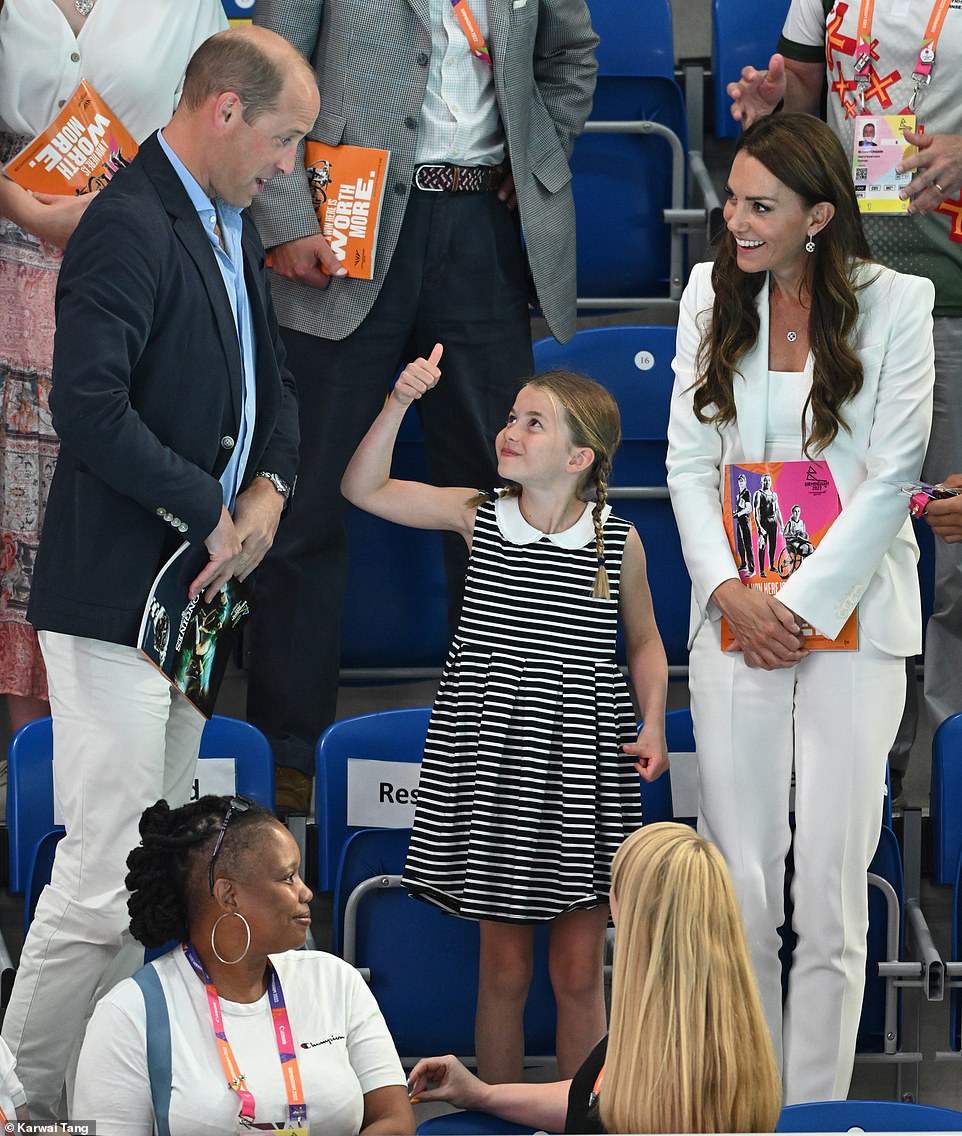 Thumb’s up for a great day out! The little royal appeared to be having a whale of a time at the event, offering her father an enthusiastic gesture after the swimming heats 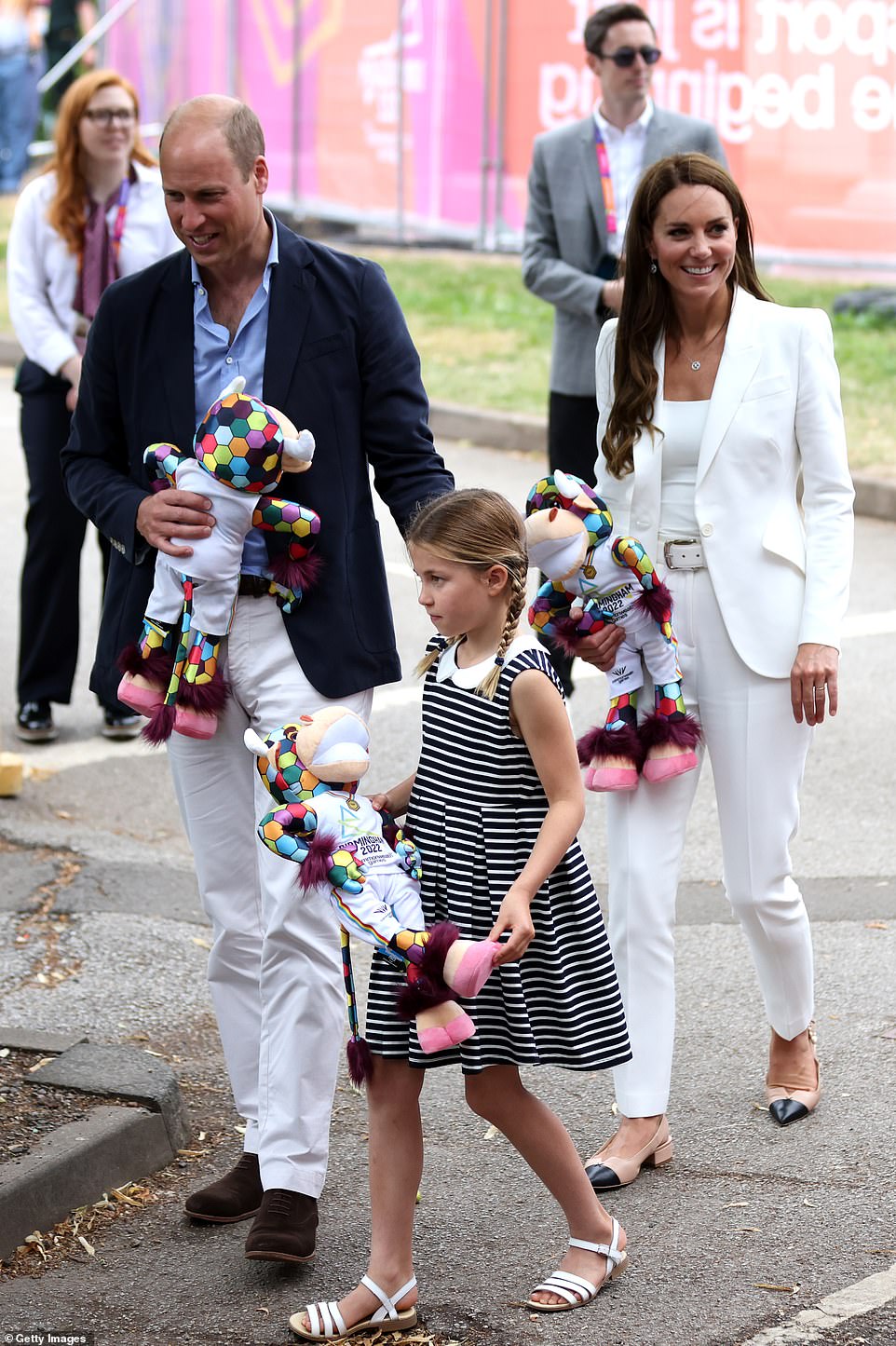 Princess Charlotte, seven, carried a teddy bear of the Commonwealth Games 2022 mascot, Perry the bull, as she left the Women’s Hockey Group Stage match at the University of Birmingham Hockey & Squash Centre on day five of the Games

After the outing to the Aquatics Centre, the Duke and Duchess of Cambridge paid a visit to a programme supporting young athletes.

Princess Charlotte was photographed on her best behaviour, shaking hands with Tim Lawler, CEO of SportsAid.

Yesterday was just the latest public appearances from Princess Charlotte over the past few months. The little royal attended a number of different events to mark the Queen’s Jubilee earlier this summer.

Meanwhile she and Prince George took part in their first official engagement at the same time, joining the Duke and Duchess of Cambridge to visit Cardiff in June. 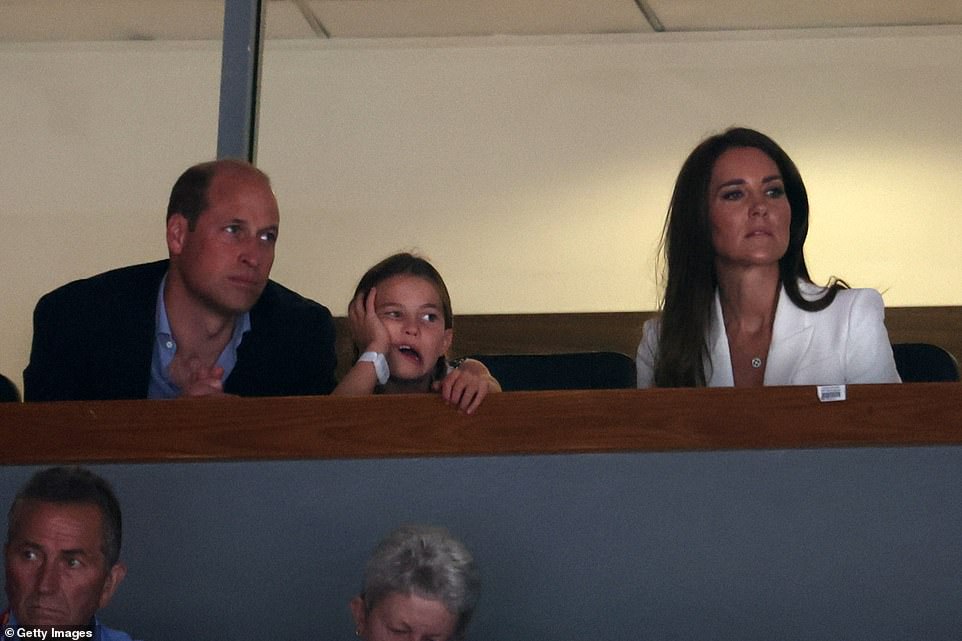 The little royal, who revealed today her favourite sport is gymnastics, leaned her face against her hand as she watched the games today 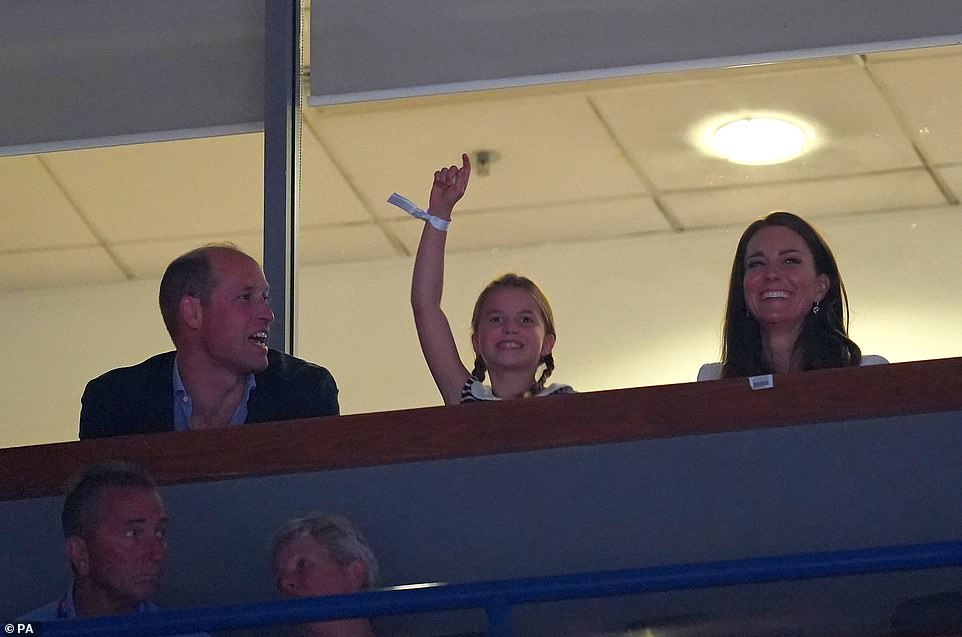 At one stage, the little royal threw her hand into the air with delight as she watched the gymnasts competing at the event 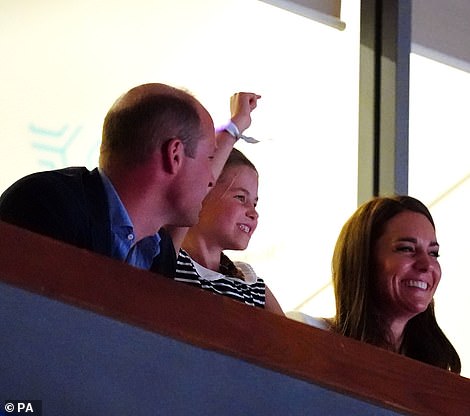 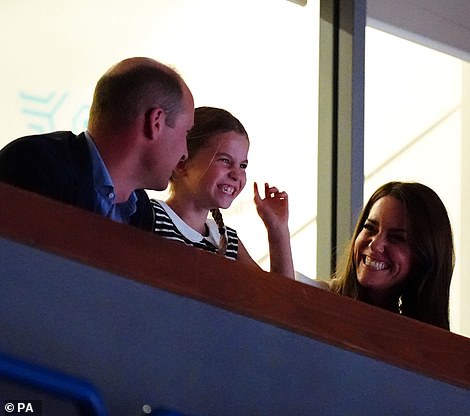 The little princess appeared particularly excited to watch the gymnastics during the Commonwealth Games today, and appeared to be cheering confidently from the stands 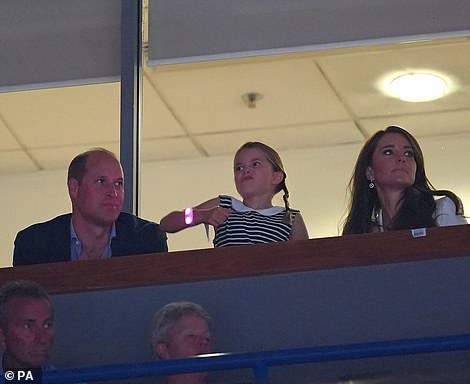 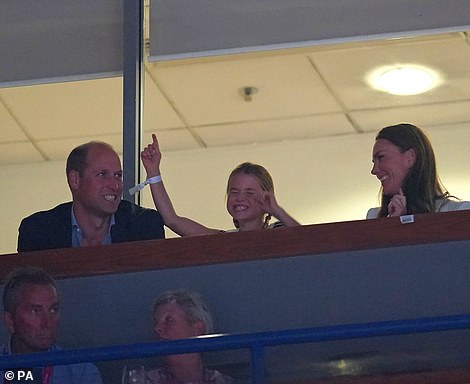 Really enjoying herself! Princess Charlotte appeared to be having a fantastic day out during the public appearance with her parents today 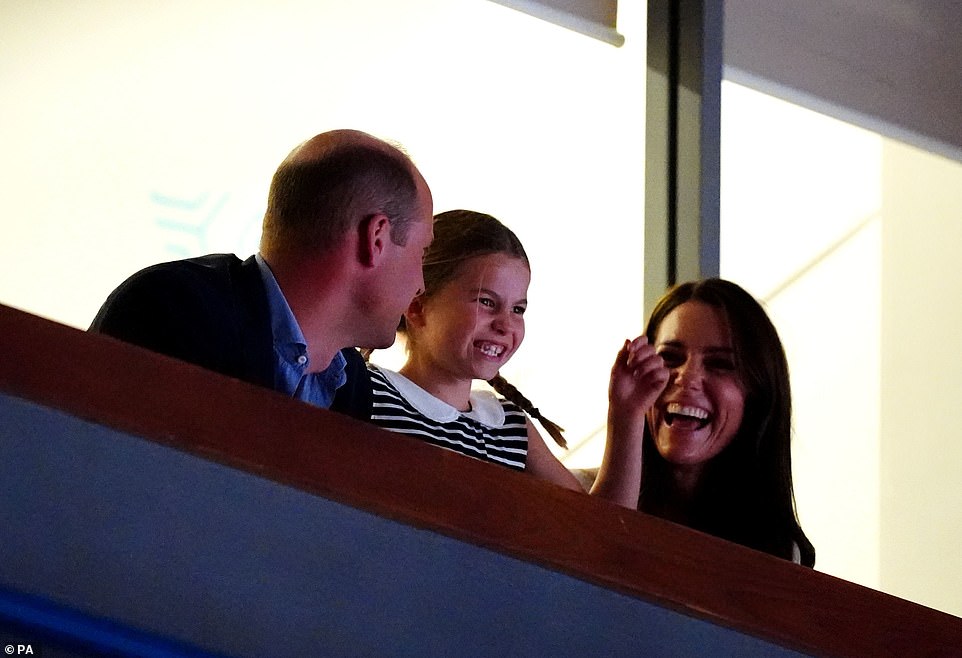 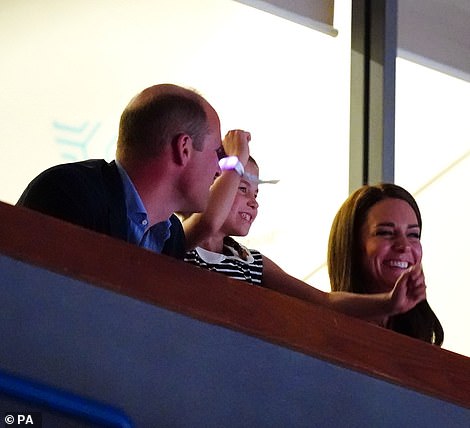 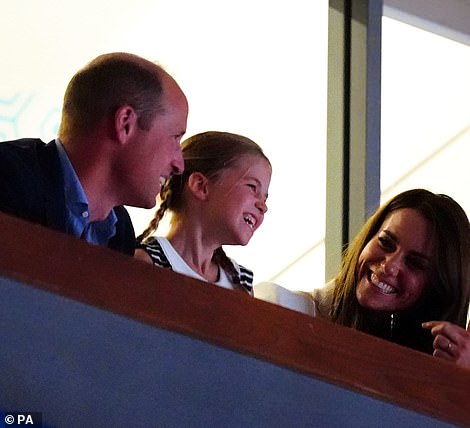 Senior royals are representing the Queen at the Commonwealth Games as she continues to take a step back from royal duties. The monarch, 96, remains in residence in her Scottish home of Balmoral, in Aberdeenshire.

Prince Charles stood in for his mother at the spectacular opening ceremony and was greeted by cheers as he drove into the stadium in an Aston Martin.

Meanwhile Prince Edward and the Countess of Wessex have made a number of appearances during the competition thus far, attending yesterday with their children Lady Louise, 18, and James, 14. 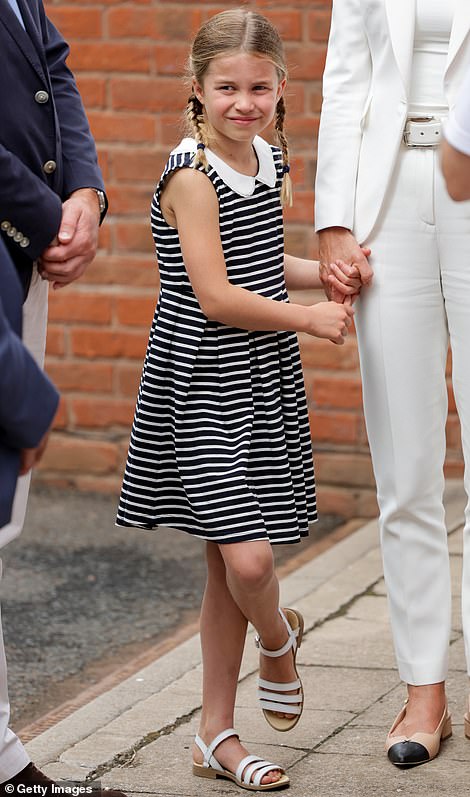 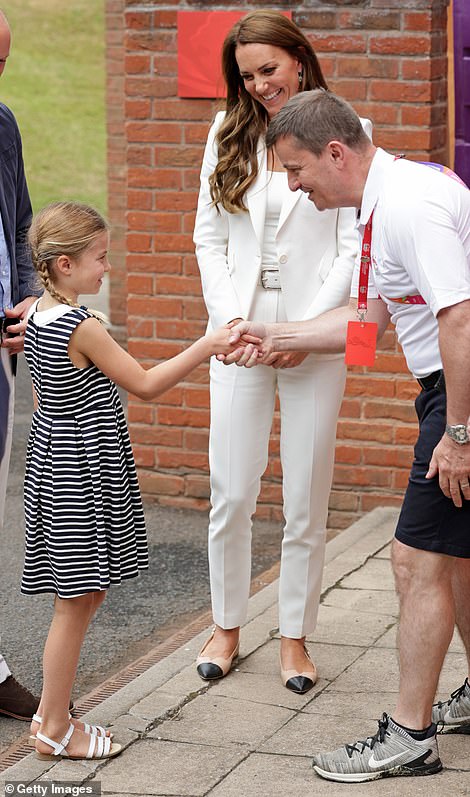 After the outing to the Aquatics Centre, the Duke and Duchess of Cambridge paid a visit to a programme supporting young athletes, pictured. Right, shaking hands with Tim Lawler, CEO of SportsAid 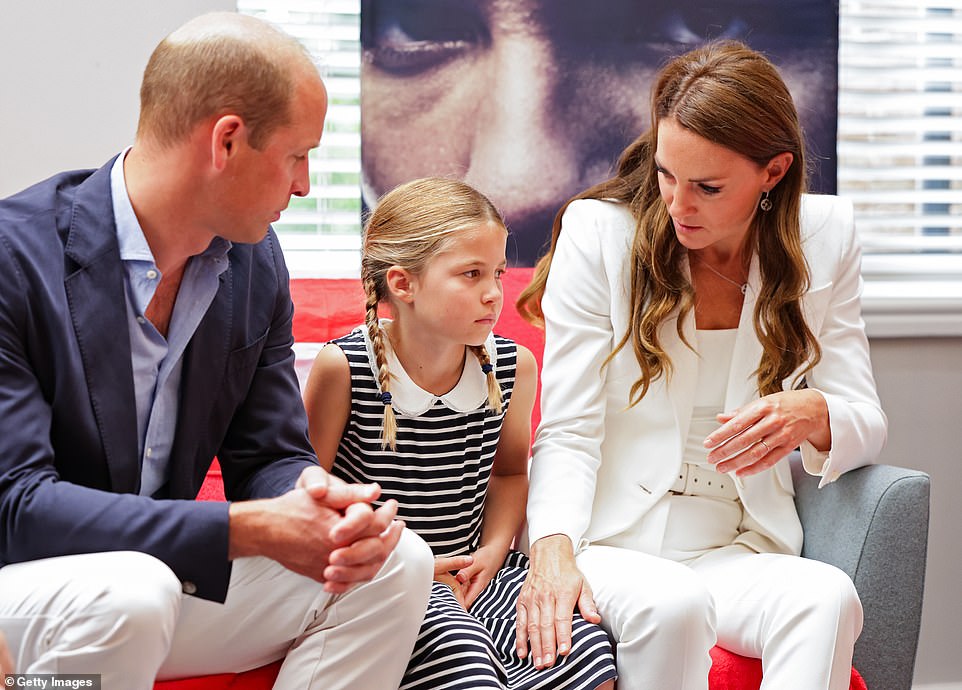