A nine-month old baby girl who was found dead in a house overflowing with bags of dirty nappies and piles of rubbish was suffering from Covid-19 at the time of her death, as it’s revealed her mother was heard shouting ‘Go, go, go’ on the night she died.

Police found the ‘unresponsive’ infant inside the home at Doonside in Sydney’s west on Monday at about 10am after responding to a concern for welfare call. The child couldn’t be revived.

Both of her parents in their 30s were also infected with Covid but the official cause of death still remains a mystery to investigators.

Officers cordoned off the area as detectives spoke with the baby’s parents.

The couple have claimed they awoke to find the the baby girl and called Triple-0.

However new details on Tuesday reveal ‘small inconsistencies’ in what each parent told police in subsequent interviews, 7News reported. 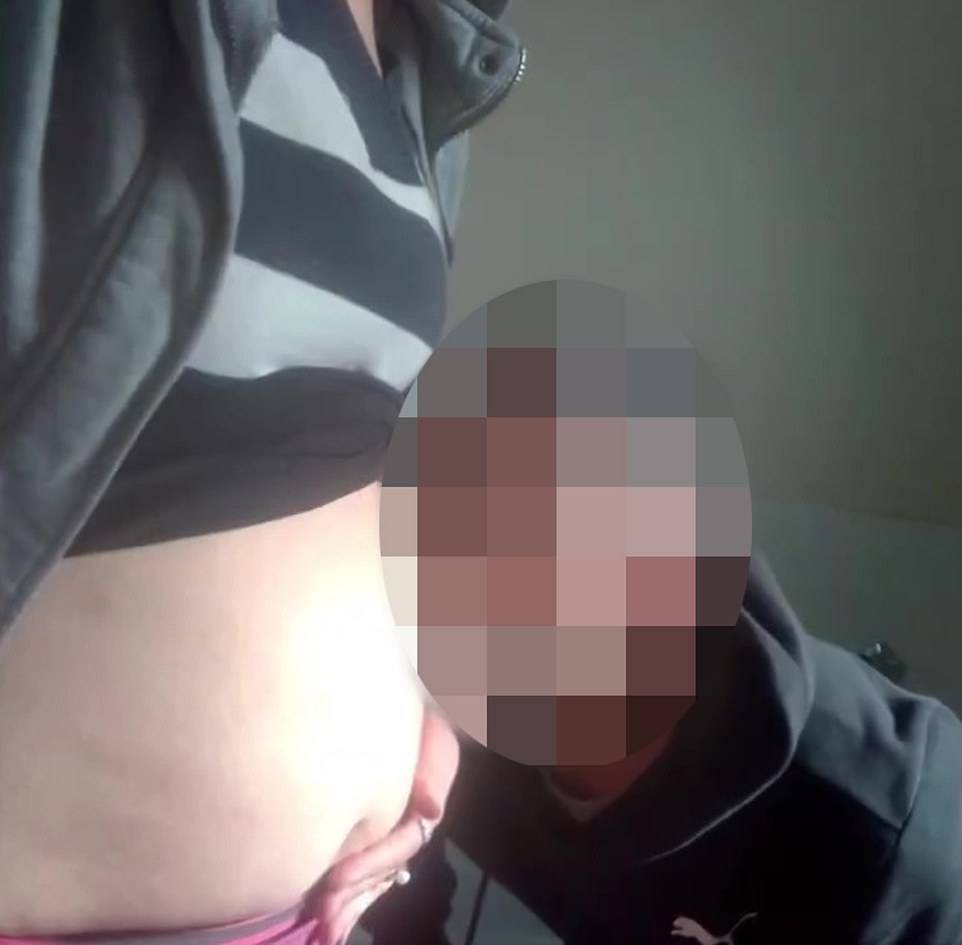 The couple (pictured) were taken to Blacktown police station for questioning. They have not been charged

Shocked residents expressed their sympathy and devastation over the tragic loss.

Neighbours claim they had frequently heard loud arguments coming from two adults in the house, but the family of four children ‘has not been out for the last week or two’.

The couple were taken to Blacktown police station for questioning. They have not been charged.

Daily Mail Australia is not suggesting the couple are in any way responsible for the baby’s death. 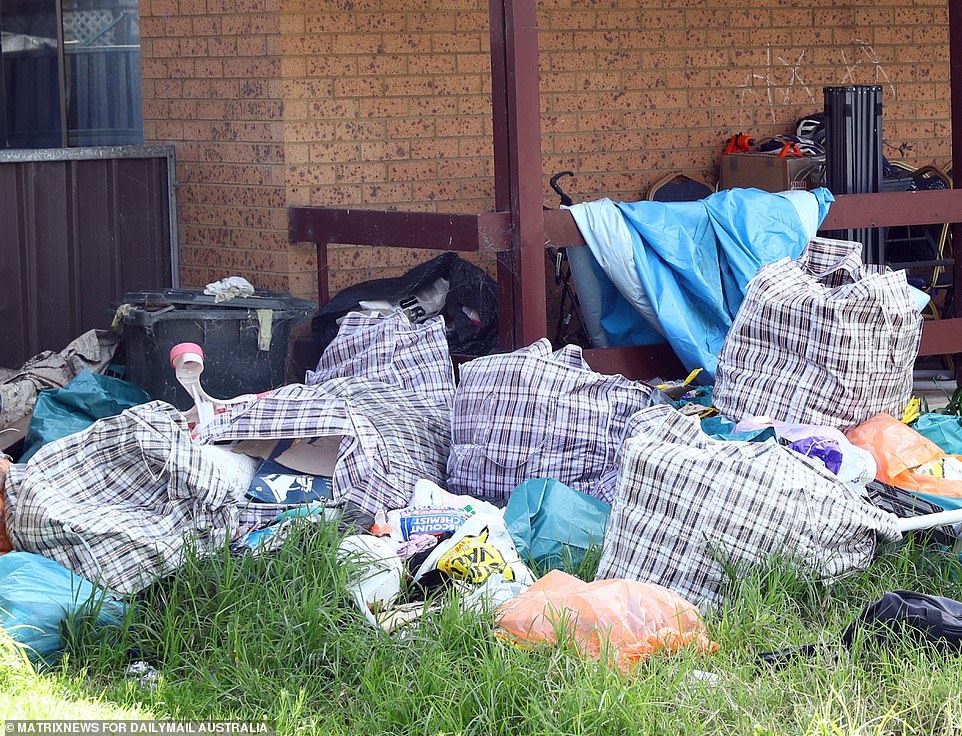 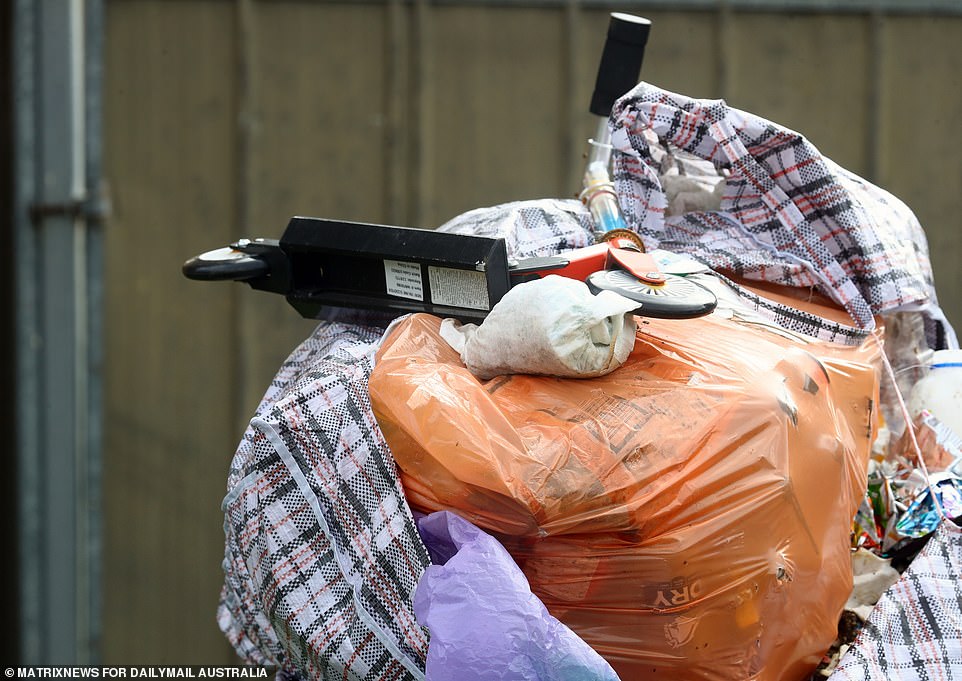 On Tuesday Daily Mail Australia was met with a horrendous odour wafting from the home, with nappies on the footpath and overflowing bins dumped on top of a shopping trolley.

The yard is strewn with beer bottles, rubbish and broken toys.

Garbage spills out the front door on to the verandah of the house, from where the baby was carried out by paramedics the previous day.

Jessica, who lives behind the squalid residence, said she had reported two emaciated pet dogs she had seen in the back yard to the RSPCA, which had then removed the animals. 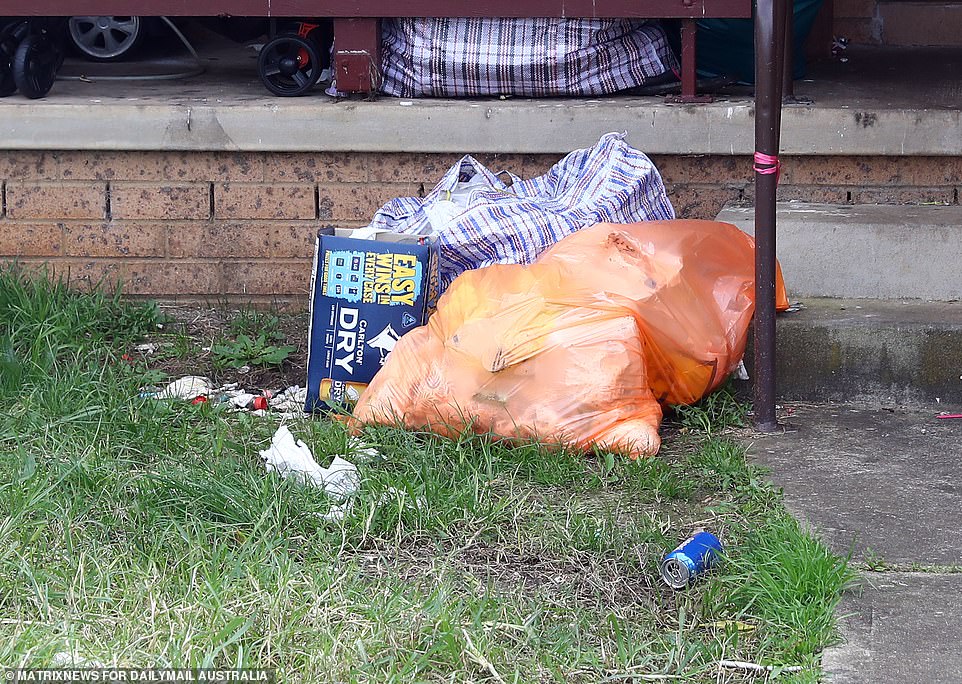 ‘I saw the dogs, but I barely saw the children. I feel so terrible I didn’t notice anything,’ she told Daily Mail Australia.

‘I heard them (the parents of the children) shouting at each other… fighting. I never saw the baby.’

Another neighbour, Karen, said she had seen ‘all the kids out on the back patio laughing and playing’ but that had been a few weeks ago, and the family had not been outside recently.

‘The parents, I think they had some issues,’ Karen said. ‘It’s just a tragedy. I don’t know whether it was an accident or a natural death.

‘I was devastated actually that someone so young won’t continue on with their life. 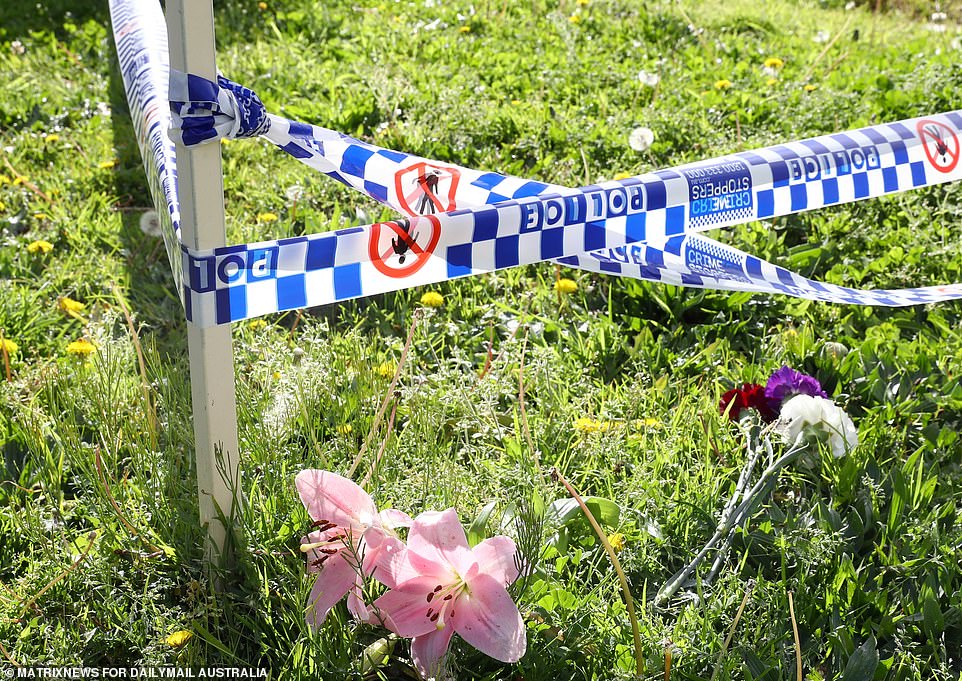 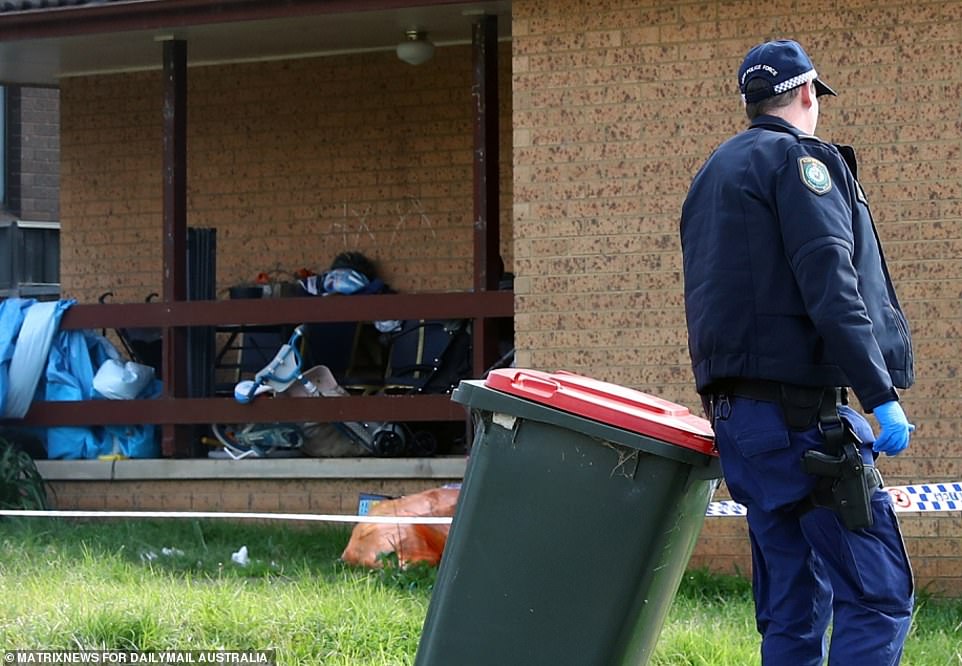 ‘I have lived in this community for 33 years and you get the odd incident, but a year ago Jason was killed. It’s heartbreaking that so many young lives are lost.’

Ms Nicholas was referring to 16-year-old Jason Galleghan who was found on August 4 last year with injuries to his head and chest at a house on Perigee Close, nearby the house where the nine-month-old was found dead.

Jason was found unresponsive and taken to Westmead Hospital where he was later pronounced dead. 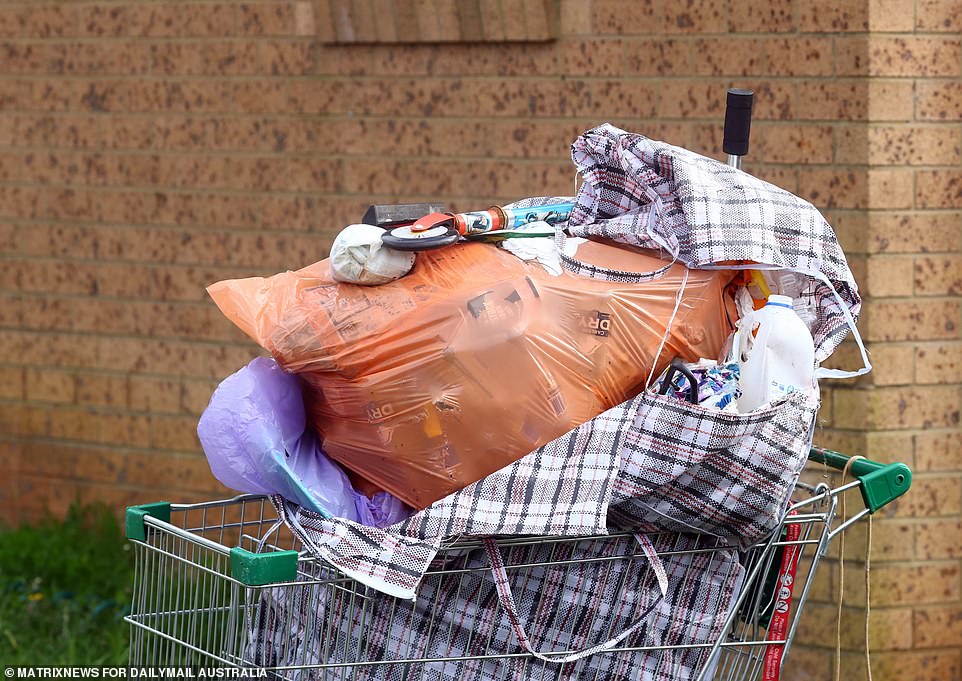 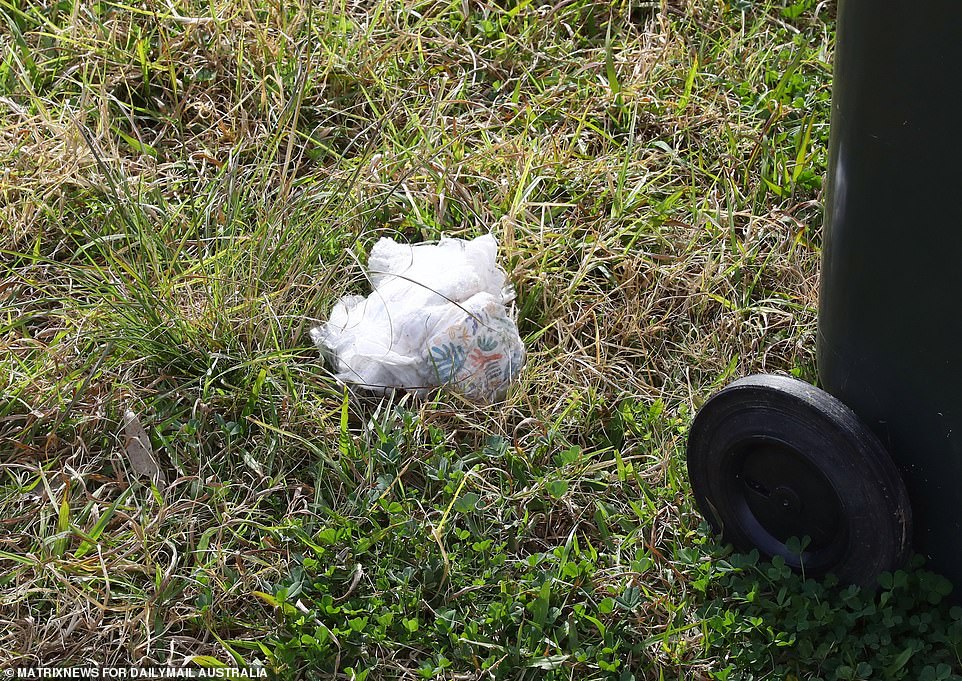 Five teenagers, including 19-year-old Kayla Dawson, have since been charged with Jason’s alleged murder.

Another neighbour of the filthy house where the baby allegedly died, Carol-Ann, said on several occasions, particularly in the evening, she had heard the sound of arguing.

‘I have heard yelling from inside when I was walking past,’ she said.

No charges have been laid and forensic police are working to determine the baby’s cause of death.