Getting less than five hours’ sleep a night in later life could raise the risk of getting a chronic illness by a fifth.

Donald Trump, Winston Churchill and Margaret Thatcher apparently got by on just four or five hours’ slumber, but a study suggests this is ill-advised.

Researchers looked at 7,864 British people, who were asked at the age of 50, 60 and 70 how much sleep they got on an average week night.

These people were tracked over 25 years to see if they developed any of a list of 13 common chronic diseases, including type 2 diabetes, coronary heart disease or dementia.

People aged 50 getting five hours of sleep a night or fewer, compared to those sleeping for seven hours, were found 20 per cent more likely to develop one of the 13 illnesses for the first time.

But they also had a higher risk of going on to get two or more of these diseases. 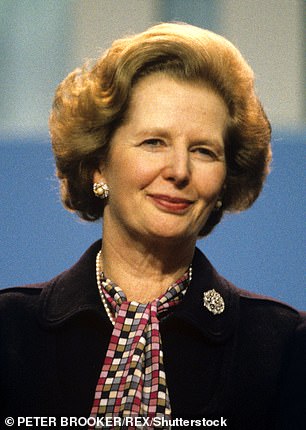 Donald Trump (left), Winston Churchill and Margaret Thatcher (right) apparently got by on just four or five hours’ slumber, but a study suggests this is ill-advised

HOW MUCH SLEEP SHOULD I GET?

Most adults need between six and nine hours of sleep every night.

Going to bed and getting up at a similar time each night programmes the brain and internal body clock to get used to a set routine.

But few people manage to stick to strict bedtime patterns.

To get to sleep easier, the NHS advises winding down, such as by taking a bath, reading and avoiding electronic devices.

The health service also recommends keeping the bedroom sleep-friendly by removing TVs and gadgets from the room and keeping it dark and tidy.

For people who struggle to sleep, the NHS says keeping a sleep diary can uncover lifestyle habits or activities that contribute to sleepiness.

It shows a lack of sleep is not only linked to illness in later life, but to multiple illnesses which people live with at the same time, raising their risk of hospitalisation and disability.

People aged 60 who got five hours sleep or less, compared to those sleeping for seven hours, were 32 per cent more likely to develop multiple illnesses in later life.

Multiple illnesses are known as ‘multimorbidity’ by health researchers.

Lead author Dr Severine Sabia, who led the study from University College London’s Institute of Epidemiology & Health, and Inserm in France, said: ‘Multimorbidity is on the rise in high-income countries and more than half of older adults now have at least two chronic diseases.

‘As people get older, their sleep habits and sleep structure change.

‘However, it is recommended to sleep for seven to eight hours a night, as our findings show too little sleep is linked to multiple illnesses.’

People spend around a third of our lives sleeping, and it plays a vital role in lowering blood pressure and reducing inflammation in the body.

This could explain why people who lose out on sleep may be more at risk of chronic illness.

The study looked at a database of civil servants in London, who were asked questions about their sleep from 1985 onwards, and agreed to have their medical records monitored over a quarter of a century.

Over that period, the new analysis shows, people who slept for five hours or less at the age of 50, rather than seven hours, were 25 per cent more likely to die.

This was driven by sleep-deprived people being more likely to develop chronic diseases which can become fatal.

It has often been argued that people who are ill, but do not yet know it, sleep less well.

That makes it look as if a lack of sleep has led to illness, when in fact it is the illness which has caused the lack of sleep.

But the strong findings in healthy people aged 50, who initially had none of the 13 chronic illnesses the study looked at, suggests their later illness really was linked to sleep deprivation.

The risk of having two or more chronic illnesses was higher in people who slept five or fewer hours at the age of 50, even when other factors like their weight, blood pressure, smoking and alcohol consumption were taken into account.

At age 60 and 70, sleeping longer than nine hours or longer was linked to higher rates of multiple chronic diseases.

But this was based on just 122 people who slept this long.

The study looked at people who self-reported their own sleep, and they can get this wrong.

But researchers found a similar result in around 4,000 people whose sleep was recorded using wrist-worn trackers.

The study, published in the journal PLOS Medicine, looked at people followed up until 2019.

Jo Whitmore, senior cardiac nurse at the British Heart Foundation, which helped to fund the research, said: ‘This research adds to a growing body of research that highlights the importance of getting a good night’s sleep.’