Six days before Williams was found dead in his Brooklyn penthouse Monday from a suspected heroin overdose, the 54-year-old HBO star from ‘The Wire’ posted a video to Instagram of Tracy Morgan after Morgan’s near fatal 2014 limousine crash.

This comes just less than seven months since the beloved actor said he started therapy after filming HBO’s ‘Lovecraft Country’ during the February 25 Tamron Hall Show and talked about the ongoing journey to recovery.

‘I just started therapy, you know, and really taking that seriously and starting to unpack, like you said, the critic in my head and what and how that has affected my –  my actions, my responses to certain situations, my relationships,’ Williams said. 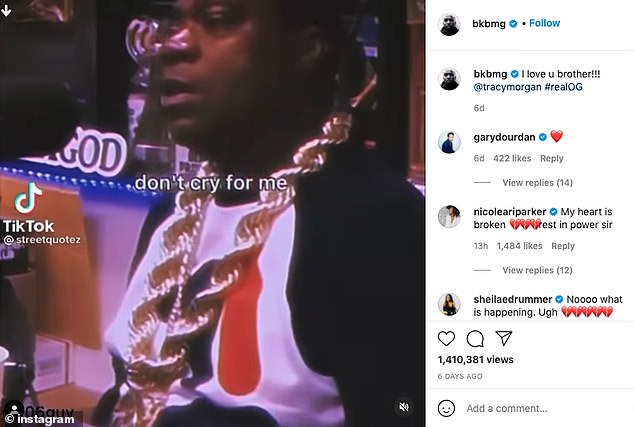 At the time, he was promoting the movie ‘Body Brokers,’ which delves into the shady underbelly of a ritzy drug-treatment facility in Malibu.

His role in the movie, he said, is a ‘perfect’ way to portray how ‘people often think that when a person puts down the drugs or the alcohol, that all the problems go away.’

‘That couldn’t be further from the truth. Drugs and alcohol are not the problems, they’re merely symptoms of the problem. And once those things go away, the real work begins.’ 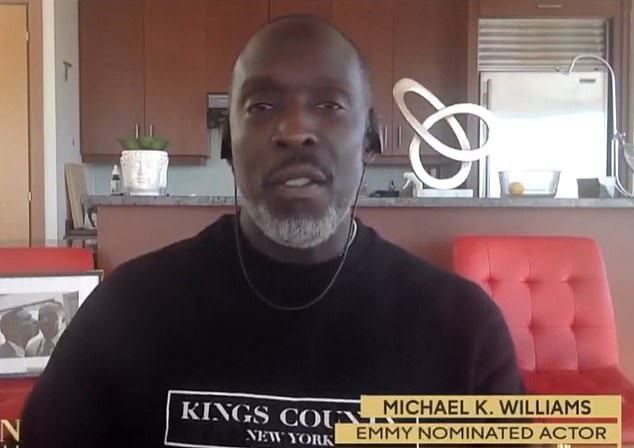 Michael K. Williams said he started therapy after filming wrapped up on the HBO series ‘Lovecraft Country’ during the February 25 Tamron Hall Show and talked about the ongoing journey to recovery 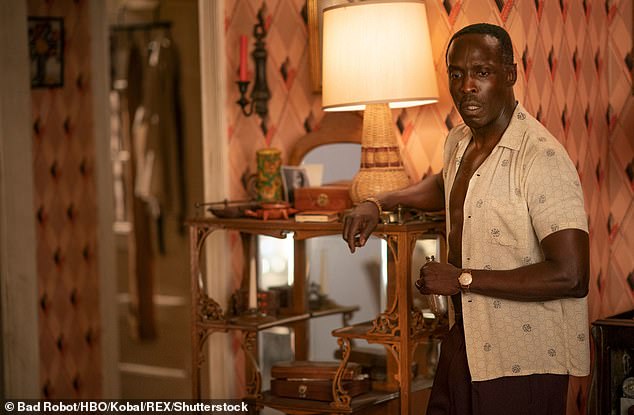 Last year, Williams played Montrose Freeman in the HBO series ‘Lovecraft Country’ (pictured). He was nominated for an Emmy Award for Best Supporting Actor for the role 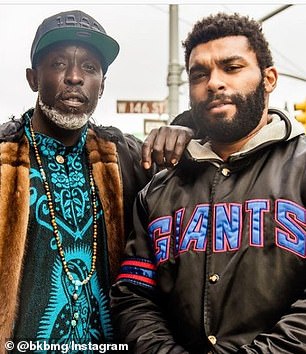 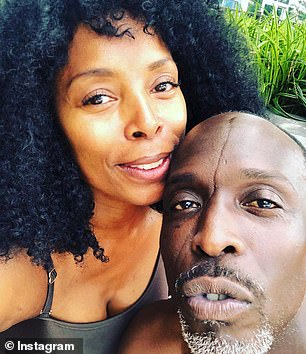 On Monday, Williams’s nephew Arvance Williams told DailyMail.com that his famous uncle was excited about jetting to Los Angeles to attend the Emmys in less than two weeks time.

He was nominated for the award for his role in last year’s HBO drama series ‘Lovecraft Country,’ for which he was a favorite to win the award.

‘I was just with him. I just bought him some fabric so he can go to the Emmys, to put under his blazer. He just got nominated for an Emmy, and he was going to LA, so he was real excited about that,’ Arvance Williams told DailyMail.com.

‘My uncle was such a sweet person. A lot of the characters he played as mean and gangster. It was a joke, because he was totally not that way. Hw was a sweetheart. … A very gentle, gentle person. And I just look at some of the stuff he was doing [on screen] and I would just laugh because that’s totally not him.’ 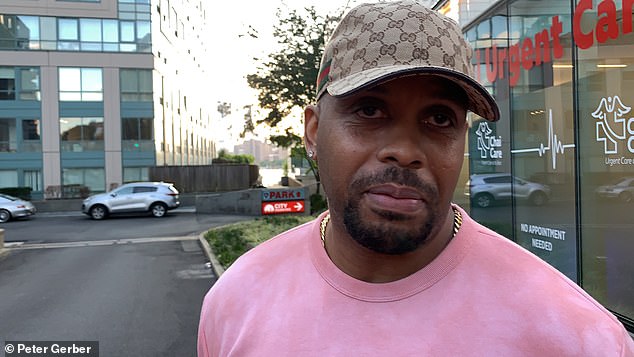 By late afternoon, a number of Williams’ nephews were seen outside the apartment complex. One of the men, Arvance Williams, called the death of his uncle ‘heartbreaking’ 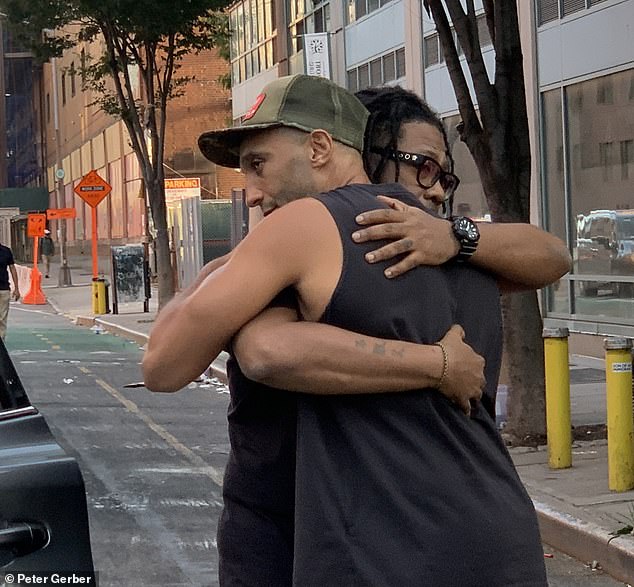 Another nephew, Booker T. Williams (in glasses), was seen hugging a friend outside the apartment complex

Williams was best known for his role in the ‘The Wire,’ which ran from 2002 to 2008. More recently, Williams earned praise for his role in last year’s drama, ‘Lovecraft Country, for which he was a favorite to win the award.

HBO said in a statement following the news of Williams’s death, saying, ‘We are devastated to learn of the passing of Michael K. Williams, a member of the HBO family for more than 20 years.’

‘It’s a terrible tragedy. I was so proud to know Michael K. Williams and even prouder to call him a friend.

‘May he Rest In Peace, and may he continue to inspire and capture the hearts of all who looked up to him, as I did.’

‘While the world is aware of his immense talents as an artist, we knew Michael as a dear friend who was beloved by all who had the privilege to work with him. We send our deepest condolences to his family for this immeasurable loss.’

Williams is survived by an adult son named Elijah.

The star was last linked to actress Tasha Smith, who last shared a snap of herself with Williams late last year.

Williams was born in East Flatbush, Brooklyn and spent he spent his childhood in the projects surrounded by drugs and violence.

As a young boy, he was sexually molested. He told The New York Times that that experience left him confused about his own sexuality and caused him to be withdrawn.

On the eve of his 25th birthday, in 1991, Williams attempted to intervene when a group of muggers jumped one of his friends.

One of the attackers pulled out a blade and slashed him, leaving him with a long, distinctive scar down the front of his face and neck.

Williams said that changed the trajectory of his career.

‘Things changed immediately after that,” Michael Williams told NPR during a 2014 interview.

‘Directors didn’t want me just to dance in the videos any more. They wanted me to act out these thug roles, you know, like – Mike, roll these – roll these dice in this video. Have this fight in this video. I was like, all right.’

‘There was a popping party going on in Queens. I went outside to get some air, and I saw that two of my other friends were being surrounded by some dudes who I didn’t know.

‘And it looked like they were about to get jumped. And I said, “Yo, I’m ready to leave. Let’s go back. I’m going to go back home now.”

‘And the dude wiped his hand across his mouth and just – what I thought appeared to be – smacked me, but what he did was he spit a razor.

‘He was positioning the razor in his mouth to get between his middle finger and his ring finger, and then he just went – swiped me down my face, and this cut my face.

‘It was actually the first hit of the fight. So we managed to escape with our lives, barely, that night.’

That’s when he landed his role in his debut film ‘Bullet’ in 1996, when he appeared alongside Tupac Shakur

Three years later, he played a drug dealer in Martin Scorsese’s ‘Bringing Out the Dead.’ He also landed a brief cameo in the HBO hit show ‘The Sopranos.’

However, in 2002, he landed the definitive role for his career, playing Omar Little in ‘The Wire.’

Williams was open about his struggles with drug addiction. Since the age of 19, he went in and out of clinics to seek treatment.

During his years filming ‘The Wire,’ Williams relapsed. In 2005, he entered a church in New Jersey seeking help with his drug problem.

‘When I came through those doors, I was broken. … This was, I would say, around the … third season of The Wire,’ Williams told National Public Radio in 2016.

‘I was on drugs. … I was in jeopardy of destroying everything I had worked so hard for,’ he stated.

Williams struggled to stay sober during the remaining years that he filmed the show. He recalled meeting Obama while high on cocaine at a campaign rally around the time the show wrapped in 2008.

‘Hearing my name come out of his mouth woke me up,’ Williams recalled in an interview with The New York Times. ‘I realized that my work could actually make a difference.’ 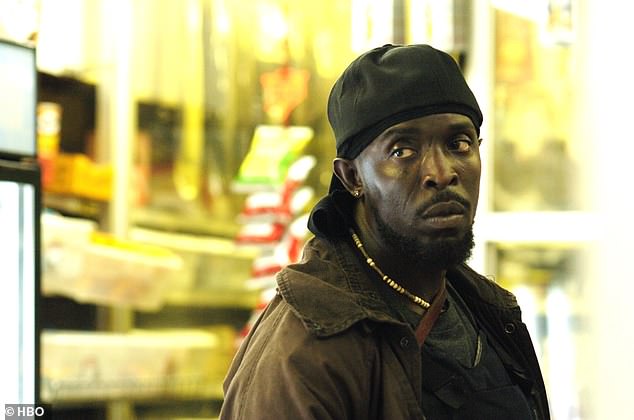 The star of The Wire, actor Michael K. Williams, has been found dead in his New York City apartment. Williams is seen above as Omar Little from The Wire 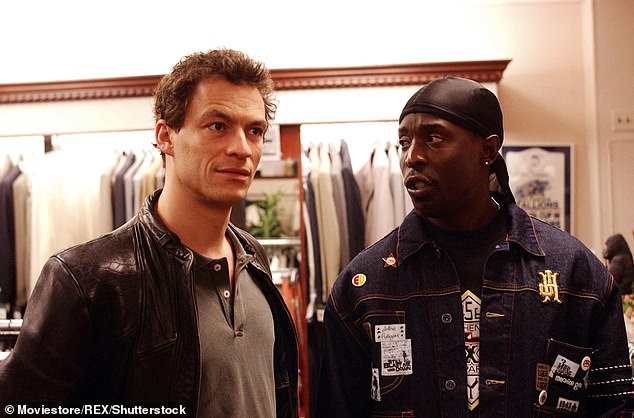 Williams is seen alongside co-star Dominic West in The Wire

Despite his ongoing drug struggles, Williams enjoyed continued success following the conclusion of ‘The Wire.’

From 2010 to 2014, he played Chalky White on ‘Boardwalk Empire.’ He also appeared in films including ’12 Years A Slave,’ ‘Inherent Vice’ and ‘Motherless Brooklyn.’

In 2019, he returned to the small screen, starring in the Netflix miniseries ‘When They See Us,’ which earned him another Emmy nod.