Donny van de Beek may have to warm the Manchester United bench a while longer, as a bitter dispute with his former agent reportedly traps him at Old Trafford.

The £35.7million signing has yet to start a Premier League game this season under Ole Gunnar Solskjaer, Michael Carrick or Ralf Rangnick. The Dutchman is ready to abandon ship, but a new setback has hit.

Everton moved to sign the midfielder on loan last summer but were unsuccessful, and Van de Beek separated from his agent Guido Albers in October, furious after a season of misery at United. 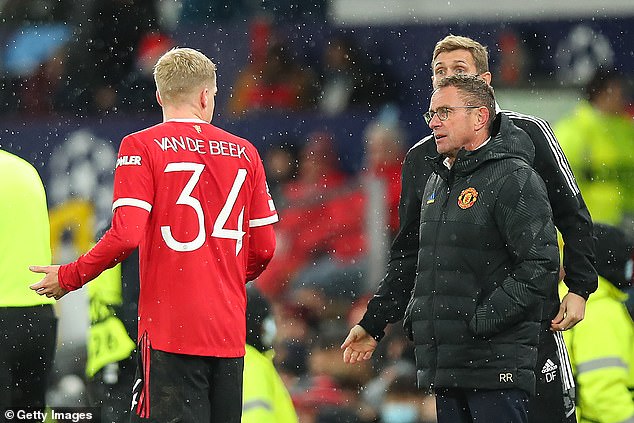 He has reportedly turned to Ali Dursun, who has worked for the likes of Frenkie de Jong and Victor Lindelof, for representation but been blocked – with Albers devilishly holding the star to a contract they signed in 2020.

An insider told the Mirror: ‘It is very difficult to see how Van de Beek can move in this window.

‘Dursun cannot secure a mandate to agree a deal because Donny is still under contract to be represented by Albers’ agency.

‘That two-year agreement does not expire till the end of the season. So, unless something changes, the player will remain in Manchester.’ 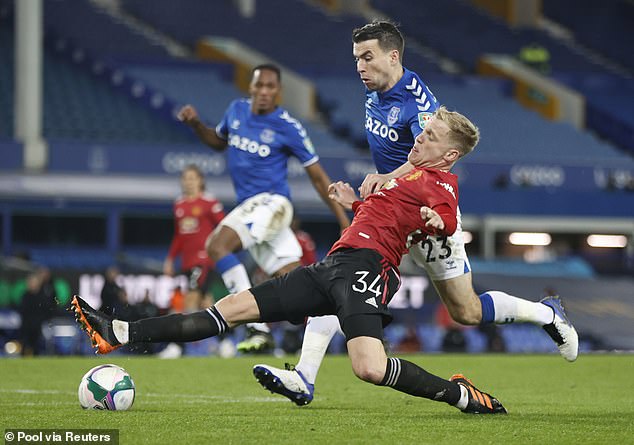 It is understood Van de Beek had hoped to work with Dursun to engineer a move to Barcelona, just like the agent had for his ex-Ajax team-mate De Jong.

Van de Beek will be 25-years-old by the start of the summer window, and will no doubt see his two years at the club as a nightmare – having shown huge promise in Holland.

The midfielder has scored just twice and contributed two assists in 48 appearances for the Red Devils.

Van de Beek has been on Barcelona’s radar before and the cash-strapped Catalans may look to find a cut-price deal with United, while Newcastle have also been linked.