Thousands of punters headed out to St Leger Festival’s pilot horse racing event today, only for the local council to announce the final three days will take place behind closed doors.

Around 3,500 people were expected to attend the start of the festival at Doncaster Racecourse today, which had been earmarked as a test to see how visitors can return to sporting events.

Punters are allowed to sit, drink and eat without face coverings on socially distanced benches next to the race track – with the number of visitors expected to rise in the coming days.

Amid rising coronavirus levels, there were calls for the four-day event to be postponed – particularly after the Cheltenham Festival was criticised for going ahead in March.

Labour mayor for Doncaster Ros Jones said: ‘My personal opinion remains that the festival is a major risk for the borough that I would rather not see happen but there are no current grounds that can be escalated for it to be held behind closed doors.’

Punters were queuing outside Doncaster Racecourse as around 3,500 arrived for the first day of the St Leger Festival today – but there will be no visitors tomorrow 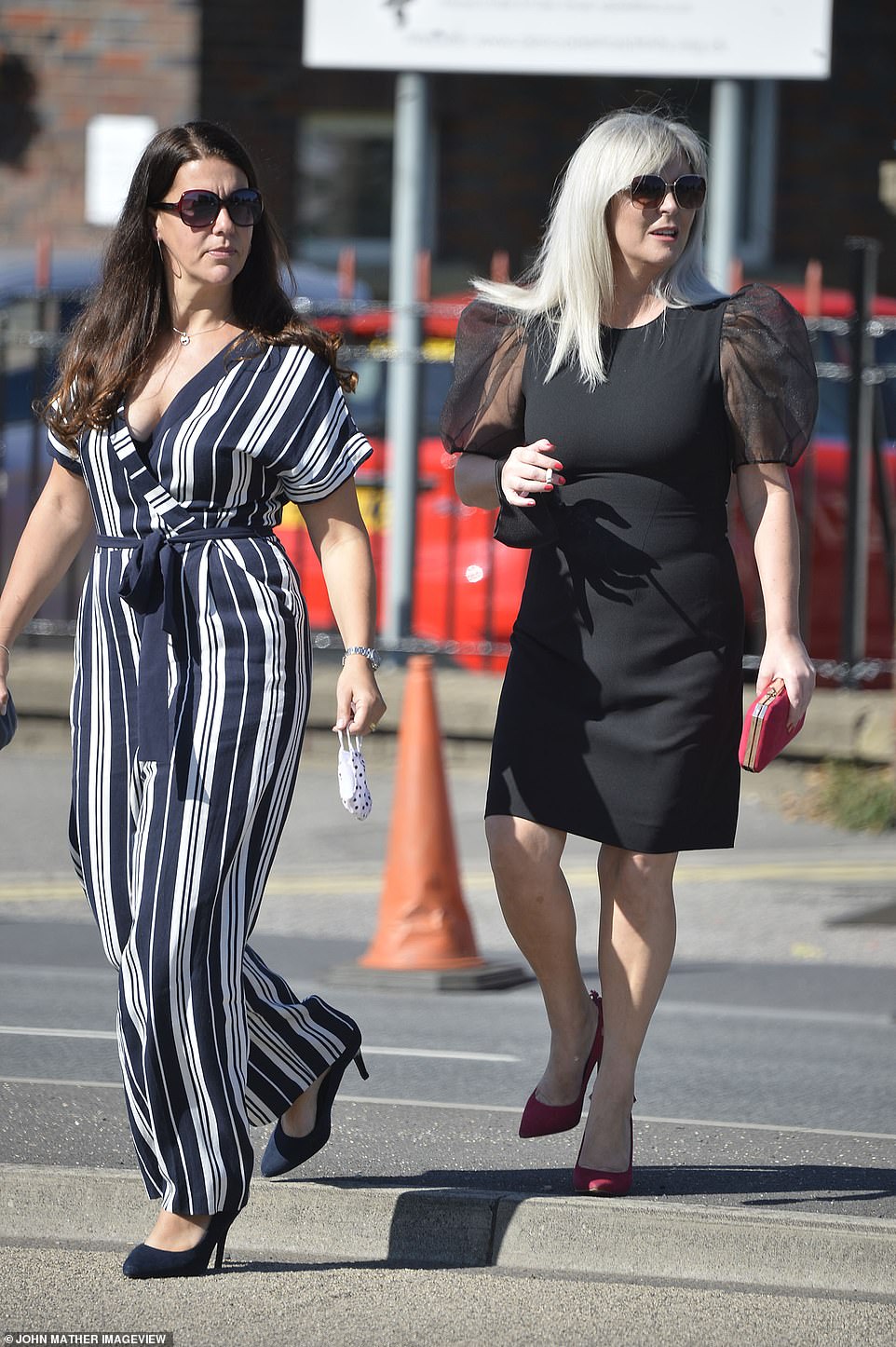 Ladies Day was set to take place tomorrow at St Leger’s Festival, but the next three days of the pilot horse racing festival, designed as a test to get visitors back at sporting events, will now take place behind closed doors.

In a statement, Dr Rupert Suckling said: ‘The current rate of infection for the borough currently stands at 10.6 infections per 100,000 people which I have been updated on today and this is an increase due to a range of factors including an increase in testing and a lag in the test results coming in.

‘Therefore on the grounds of public health and public safety I have instructed the racecourse to hold the St Leger Festival behind closed doors from tomorrow. The day’s racing will continue today as it is safer to manage racegoers on site and with enhanced test and trace, it will be easier to identify where they are from rather than closing the event today and leaving people to their own devices in Doncaster and the borough generally.

‘I appreciate this decision may not be met with universal agreement but it is the safest and most appropriate way to move forward for everyone’s best interests in the borough and beyond.’

Around 3,500 people are attending today’s event – a figure that was expected to rise to 6,000 a day had the festival remained open.

Asked about the pilot on BBC Breakfast on Wednesday, Health Secretary Matt Hancock said: ‘The Prime Minister is going to set out more details of the consequences of the new rule for six people gathering later today. And we’ll set out what that means for some of these events that we were planning to do.’ 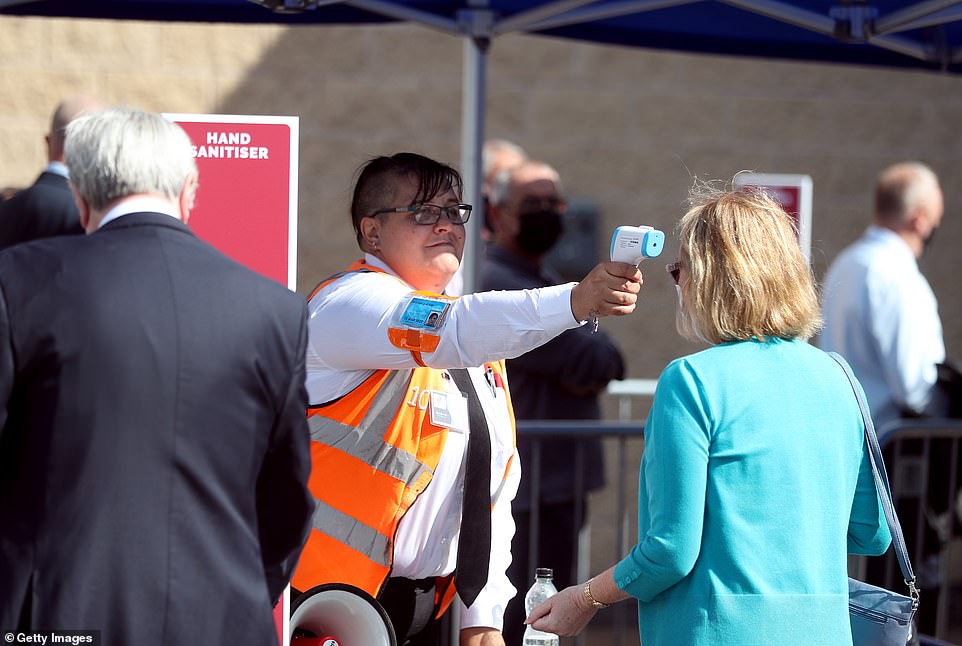 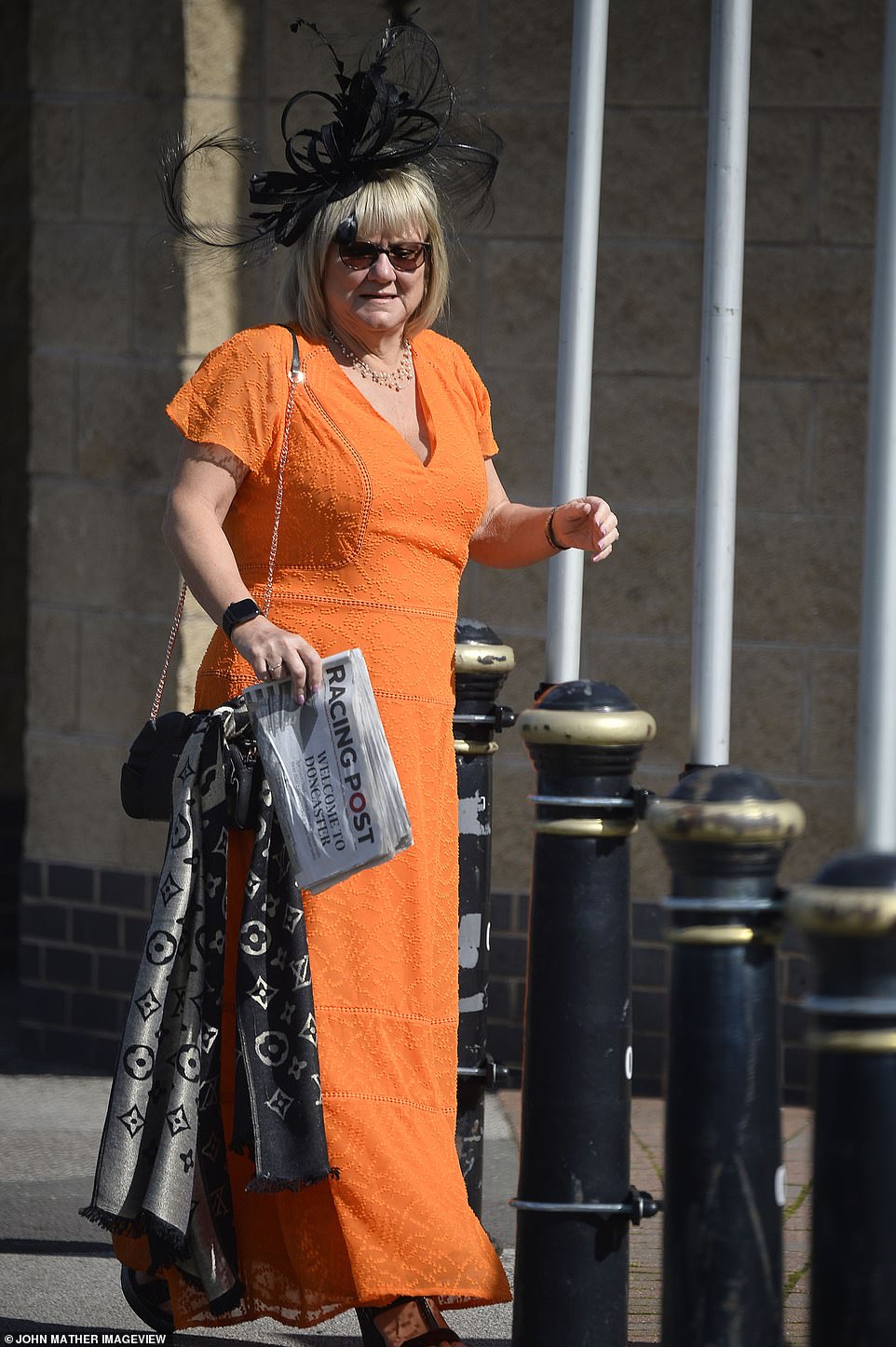 Visitor numbers at the racing festival are expected to rise to around 6,000 a day over the next three days

Doncaster’s mayor, Ros Jones, had warned earlier that the event had ‘been imposed upon the borough by government as part of a national pilot for spectators to return to sporting events’.

Ms Jones added: ‘I fully recognise the need to get back to some sort of normality and appreciate the economic benefits that the St Leger Festival brings to Doncaster but I believe the risk is too great as we are seeing rising infection rates nationally.’

‘I urge everyone attending the St Leger Festival to follow the guidance, ensure social distancing and to keep themselves and others safe. I would also ask people to behave responsibly in and outside of the racecourse and help the festival pass successfully for the borough.’

Since racing resumed after lockdown at Newcastle on June 1, it has been restricted first to essential staff and from early July onwards owners too. 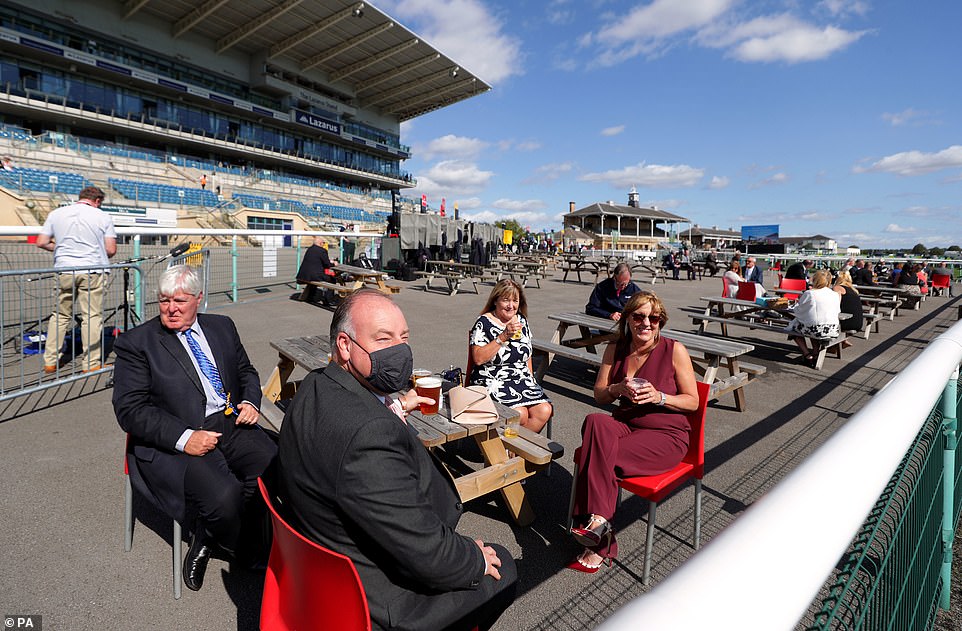 Today is Legends Day at St Leger Festival, with around 3,500 expected to be in attendance. Benches have been set up alongside the course with social distancing in mind 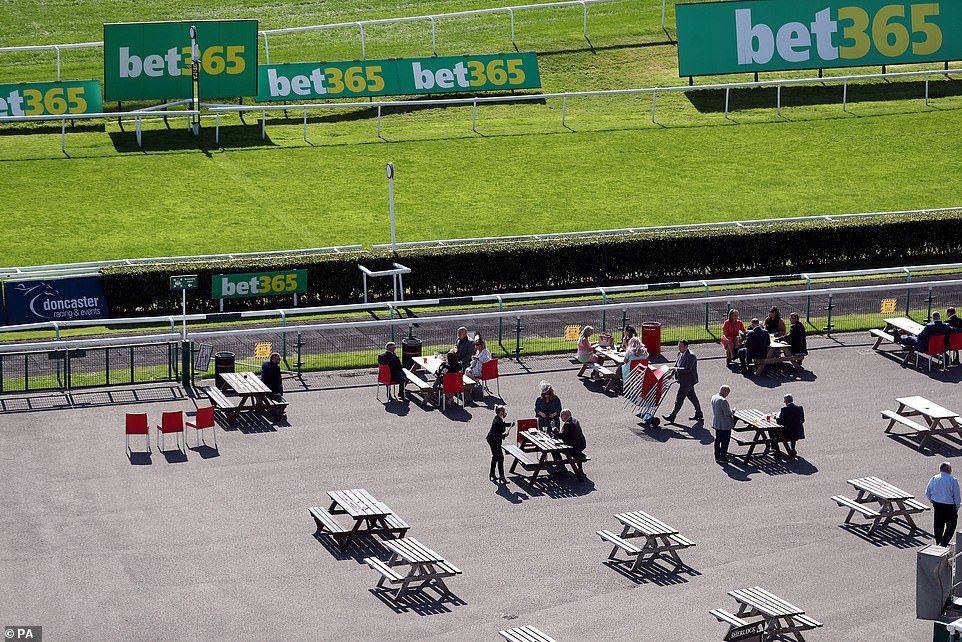 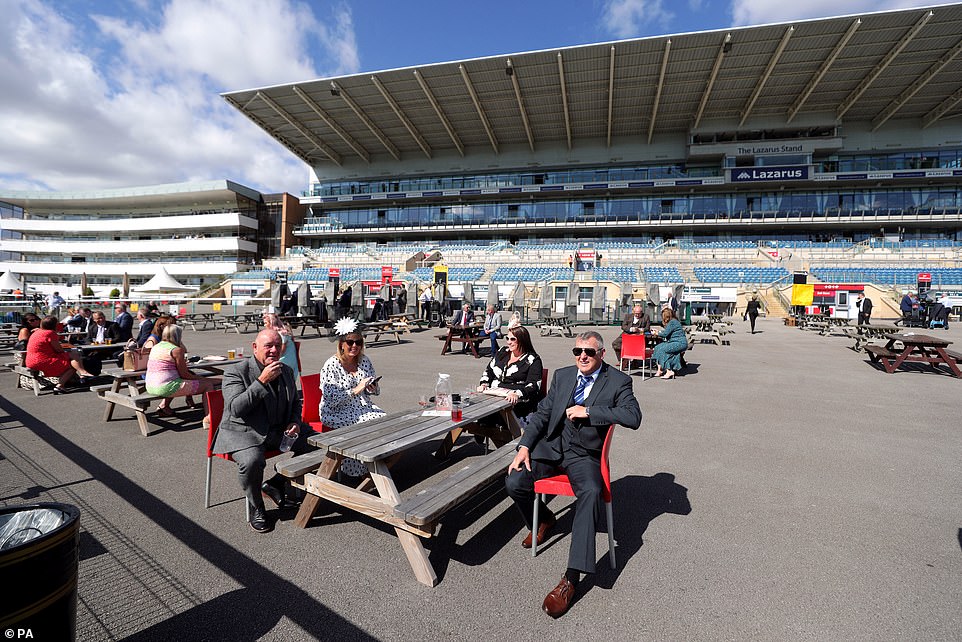 As visitors arrived today, bosses at the racecourse have said there were ‘nerves,’ about ensuring the festival was ready

Doncaster Racecourse has been divided into smaller zones, to split visitors attending during the four-day event.

Each zone has designated entry and exit points, with punters asked to arrive and depart at different times in order to keep social distancing measures in place.

Visitors do not need to wear masks when sitting on benches outdoors – which have been spread apart to a safe distance.

The festival is operating a one-way system at bookies and toilets.

As an added layer of protection, social distancing officers, along with stewards at the course, will be patrolling to ensure visitors are sticking to coronavirus rules.

On its website, the festival has told visitors they must wear masks when entering the event and while indoors.

Speaking before the festival, its racing division managing director, Mark Spincer, said: ‘There are nerves, absolutely.

‘I think the team has done an amazing job, and we’re still finalising and tweaking things – and we’ll probably do that every day of the four.

‘But we’re set, tickets have gone out – which are all advance sales, because we’re not doing walk-ups.’

Mr Spincer acknowledged the stakes were high as the feasibility of racing crowds is put to the test on Wednesday.

He added: ‘Nobody needs to tell us how important this is – not only for Doncaster and Arena but for the industry and sport as a whole, the leisure sector and the hospitality industry need us to get this right.’

Director of public health for Doncaster Dr Rupert Suckling had previously confirmed the event could go ahead with ‘considerable planning and public health requirements in place’.

He said: ‘I appreciate this decision is one that will divide people in Doncaster and maybe further afield given the strength of feeling of both sides of this debate.

‘However from a public health perspective, I insisted on stringent tests being met before I could be assured and confident that the event should proceed with spectators.

‘I am now assured and satisfied that the racecourse, which has been positively working with us and other partners in the borough, has put the required measures in place to ensure the festival can be as safe as it can be.

‘I will be monitoring the situation on a daily basis and will take any necessary action.’ 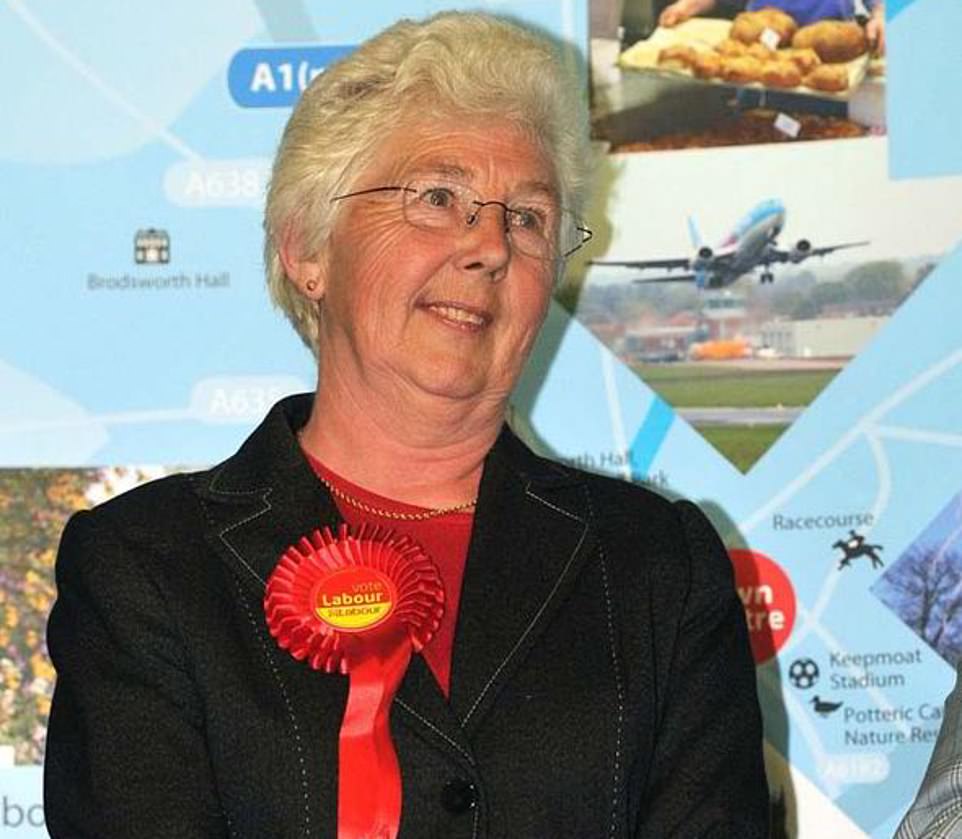 Mayor of Doncaster Ros Jones has pleaded with visitors to the horse racing festival to ‘follow the guidance, ensure social distancing and to keep themselves and others safe’ 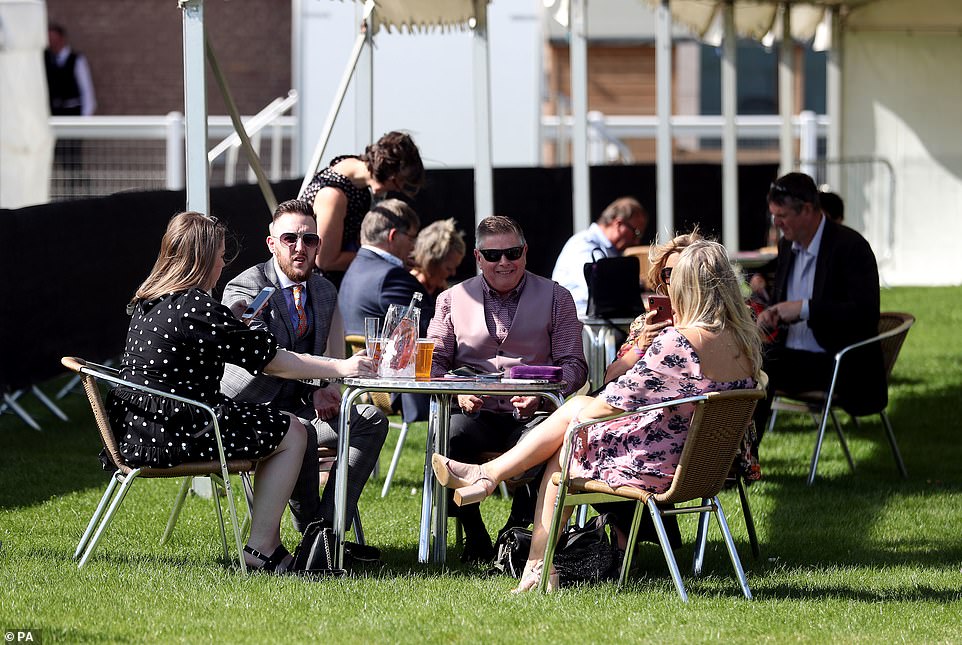 The festival has warned visitors arriving today (above) that ‘social distancing officers,’ are patrolling areas to ensure they are sticking to coronavirus rules 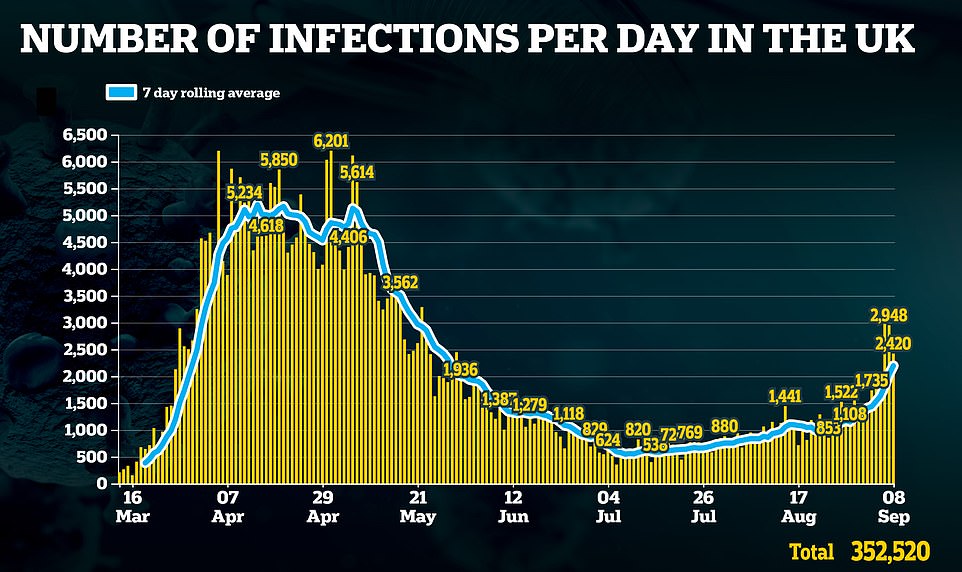