Donald Trump’s sons gloat on Twitter after he is acquitted: Eric tweets ‘2-0’ and Don Jr. calls his father’s second impeachment ‘a show trial’

Trump Jr. sent out a series of tweets, calling the Senate proceedings a ‘show trial’ and blasting Senate Minority Leader Mitch McConnell, who voted to acquit Trump, yet promptly took to the Senate floor to explain that he did hold the ex-president responsible for the violent January 6 insurrection.

Eric Trump tweeted 2-0 after his father, former President Donald Trump, was acquitted by the Senate Saturday

Donald Trump Jr. sent out a series of tweets after the Senate voted to acquit his father in an impeachment trial for a second time 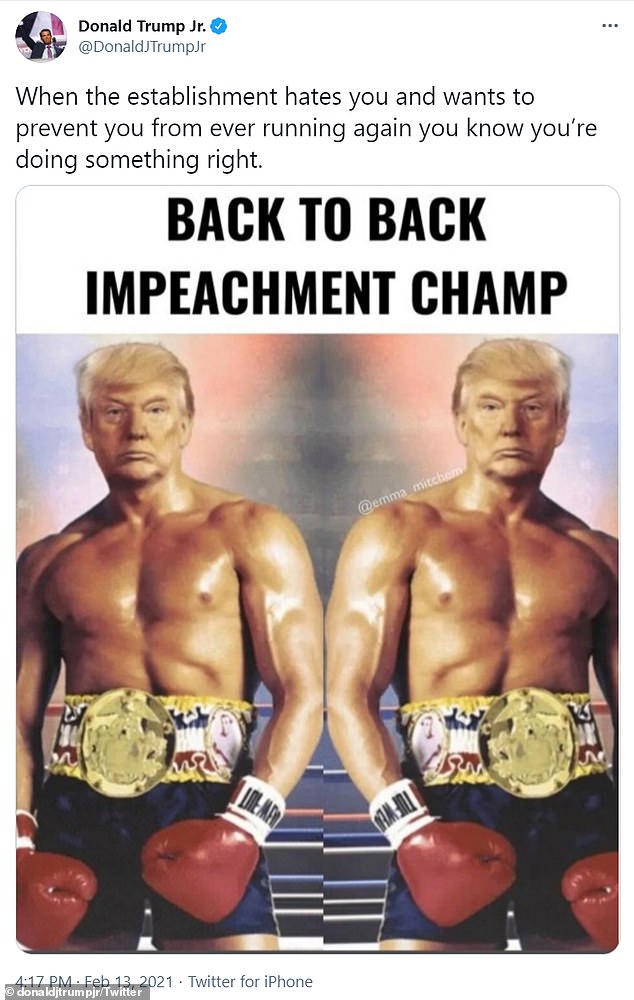 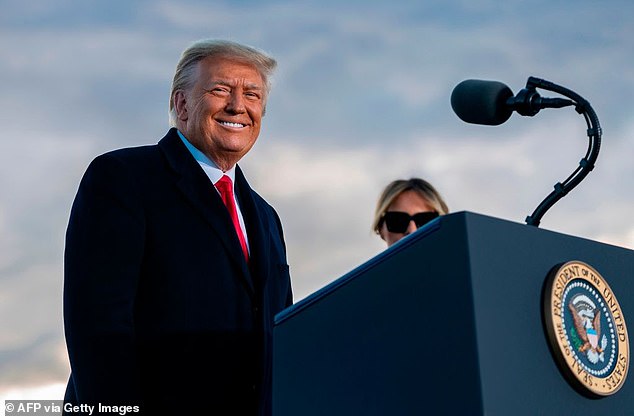 ‘NOT GUILTY,’ Trump Jr. tweeted first, immediately after the vote. ‘Now maybe it would be nice if the senators stopped putting on show trials for free air time and actually started working for the American people for a change.’

The eldest Trump son continued his commentary adding, ‘Beating these establishment clowns twice after years of BS and under unprecedented circumstances is a badge of honor.’

‘When the establishment hates you and wants to prevent you from ever running again you know you’re doing something right,’ Trump Jr. added.

Trump Jr. then turned to McConnell.

McConnell broke ranks with Trump in the hours leading up to the January 6 insurrection, giving a speech on the Senate floor prior to the counting of the Electoral College votes, reiterating that President Joe Biden was the true winner of the election.

McConnell had tried to encourage GOP senators not to join onto an effort pushed in the House to challenge Electoral College vote counts.

Republican Sens. Josh Hawley, Ted Cruz and a number of others, did so anyway – elongating the proceedings on January 6 and giving credence to what Democrats have called the ‘big lie’ – that Trump lost the election due to widespread voter fraud, which is false.

McConnell said he voted against conviction because he didn’t believe a president could be tried after leaving office.

‘They stormed the Senate floor. They tried to hunt down the speaker of the House. They built a gallows and chanted about murdering the vice president,’ McConnell said. ‘They did this because they’d been fed wild, falsehoods by the most powerful man on earth because he was angry he lost an election. Former President Trump’s actions preceding the riot were a disgraceful dereliction of duty.’

Donald Trump Jr. went after Senate Minority Leader Mitch McConnell, who spoke out against the former president on the Senate floor after Saturday’s vote

McConnell also hinted that there were still other avenues where Trump could be held responsible.

‘President Trump is still liable for everything he did while he was in office,’ McConnell said.

Trump Jr. went after McConnell for his comments.

‘If only McConnell was so righteous as the Democrats trampled Trump and the Republicans while pushing Russia collusion bulls**t for 3 years or while Dems incited 10 months of violence, arson, and rioting,’ the eldest Trump son said. ‘Yea then he just sat back and did jack s**t.’

Trump Jr. then retweeted tweets that suggested that McConnell wouldn’t be able to lead the Senate Republicans back into a majority in 2022.

The Senate is currently split 50-50, but because Democrats won the White House, Vice President Kamala Harris is able to come and make a tie-breaking vote.