Bloomberg reported on Friday night that Meadows, 61, was confirmed to be infected with the virus.

On Friday 125,000 Americans tested positive – a new record, and the third consecutive day with more than 100,000 new cases every day.

It was unclear when he tested positive.

He was last in the White House on Thursday, CNN reported.

Mark Meadows, 61, has tested positive for coronavirus, it emerged on Friday 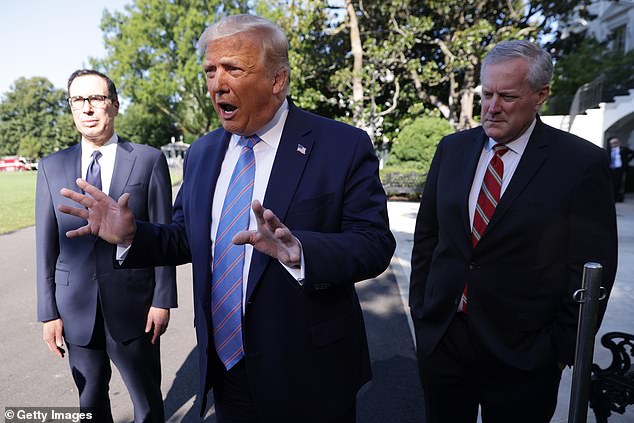 Meadows, right, has been one of the strongest supporters of Trump’s anti-mask policy

His boss tested positive on October 1 and is thought unlikely to become infected again.

Meadows was with the president throughout his treatment at the Walter Reed medical center.

The White House has been battling a coronavirus outbreak since September 26, when a Rose Garden ‘super spreader event’ was held – the nomination of Amy Coney Barrett.

On Tuesday night an estimated 250 people gathered at the White House on watch the results filter in. Organizers said that everyone would be tested for COVID-19 on entry.

Earlier on Tuesday Meadows joined Trump at the campaign headquarters in Arlington, Virginia, and was again not wearing a mask.

On Thursday he was in the White House.

Meadows has been one of the most adamant anti-maskers in the Trump administration, and insiders say he is rarely seen wearing a face mask, in deference to Trump.

On October 12, outside Coney Barrett’s Senate hearing, Meadows was asked by reporters to keep his face mask on while addressing them.

‘I’m not going to talk through a mask,’ he said, and walked off. 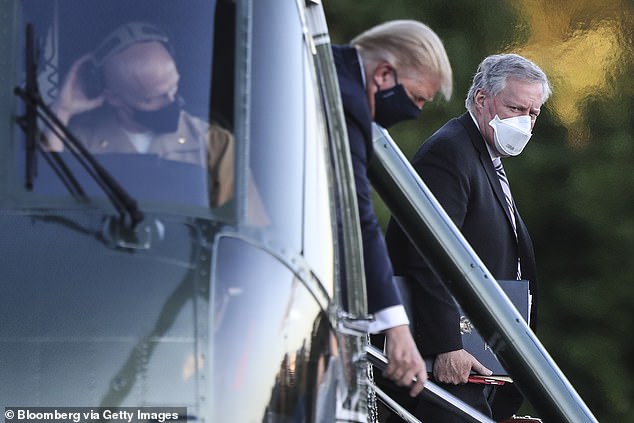 Meadows is pictured accompanying Trump to Walter Reed on October 2