It’s the third rally the former president is hosting in three days and his second-to-last before the contentious midterm elections on Tuesday, November 8.

During his warm-up remarks, Donald Jr. attacked Democrats for rising crime rates throughout the country, including Fetterman for his tenure as mayor of Braddock, Pennsylvania.

Like many Republicans, he also suggested Fetterman was not up to the job of senator because of the auditory processing and speech issues he was left with after suffering a stroke in May.

Junior later returned to his comments about Fetterman, ‘We need to overwhelm the nonsense to speak about what we’re up against. I mean, I used the Fetterman example earlier.’

He referenced similar comments he made in late October.

‘I believe that if you’re going to be in the United States senator, you should have basic cognitive function,’ Donald Jr. said. 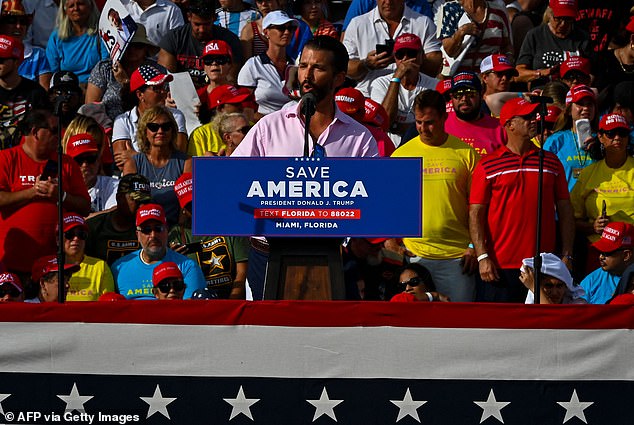 He said the media called him an ‘ableist’ for making fun of Fetterman, which he defined as ‘racist against those with disabilities’

‘The media, they go after me, they say he’s an ableist, meaning he’s racist against those with disabilities.’

He continued, ‘It’s not like he’s in a wheelchair, and he can think, but he’s incapable of forming a sentence.’

It comes after Fetterman accidentally said he was against abortion at a Saturday rally in Philadelphia.

‘I run on Roe v. Wade. I celebrate the demise of Roe v. Wade,’ the Pennsylvania lieutenant governor said.

Donald Jr. referenced the incident at his rally, opining, ‘They’ll put him in there to vote however Chuck Schumer tells him to. You don’t have to think, you just have to be able to, like, show up and, like, raise your hand.’

‘And his comments on Roe v Wade yesterday doesn’t seem like he even can do that right,’ he said.

‘We’re up against a Democratic Party today that doesn’t believe that a United States senator should not have mush for brains.’

Fetterman, who is going head-to-head with celebrity doctor Dr. Mehmet Oz, may well have been trying to say his opponent ‘celebrates the demise of Roe v. Wade.’

Fetterman and his Republican rival have been neck-and-neck in the bitterly fought race, but his performance when it comes to public speaking has drawn concerns after a number of garbled answers, much of which has been blamed on his recovery from his stroke. 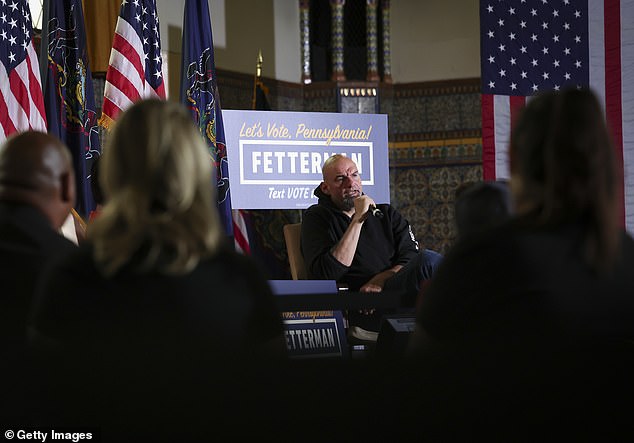 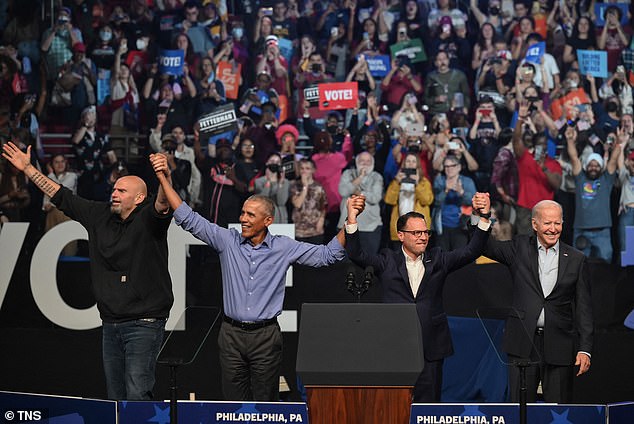 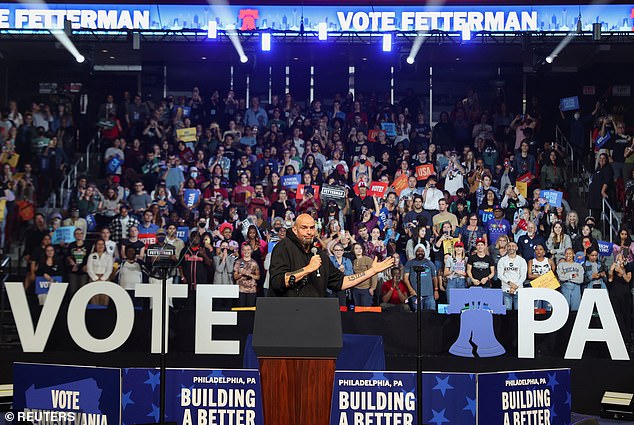 ‘I run on Roe v. Wade. I celebrate the demise of Roe v. Wade.’ he could be heard stating on camera, while holding a microphone in his hand 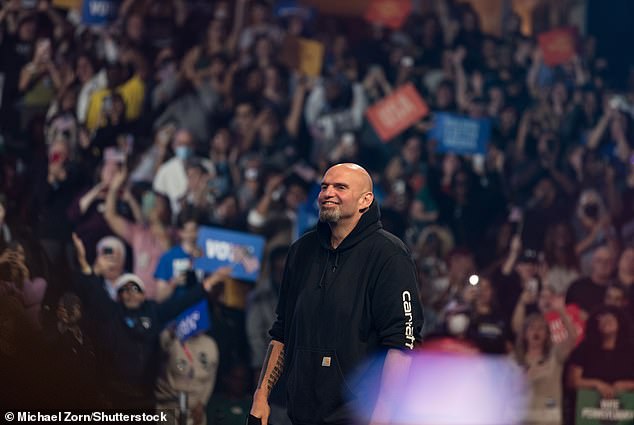 Last week Oz for the first time surpassed John Fetterman in polling just days before the midterms and a week after their debate where the lingering effects of his Democratic rival’s stroke were on full display.

The two point gap – 48 percent to 46 percent – continues a steady improvement for Oz, whose support from likely Pennsylvanian voters has increased by 5 percentage points since September, according to polling from The Hill/Emerson College.

Real Clear Politics’ average of polls has Oz with just a 0.1 per cent lead, and is projected to win – even if it is by then narrowest of margins.

It also mirrors a national trend as Republicans surge in polls, with some tying or overtaking their Democratic challengers in the days ahead of the election after months of trailing.

Meanwhile, Fetterman’s support only ticked up by 1 percent from the September poll from the one taken October 28-31. The split between the two candidates is within the poll’s plus or minus 3 percentage point margin of error.

Consistently, this particular polling has shown Fetterman, 53, ahead of Oz, 62.

A televised debate performance last month shocked some viewers and only sowed further concerns of his ability to hold political office.

‘Hi, goodnight everyone,’ Fetterman said, before addressing his health. ‘Let’s also talk about the elephant in the room: I had a stroke. [Oz] never let me forget that.’

At one point Fetterman was asked to clarify his position on fracking, as moderators pointed to a 2018 interview where the lieutenant governor expressed broad opposition to the practice, but not a ban.

Over the course of the debate, Fetterman twice demurred to release his full medical record to the public.

‘My doctor ultimately believes that I’m fit to be serving and that’s what I believe,’ Fetterman said. 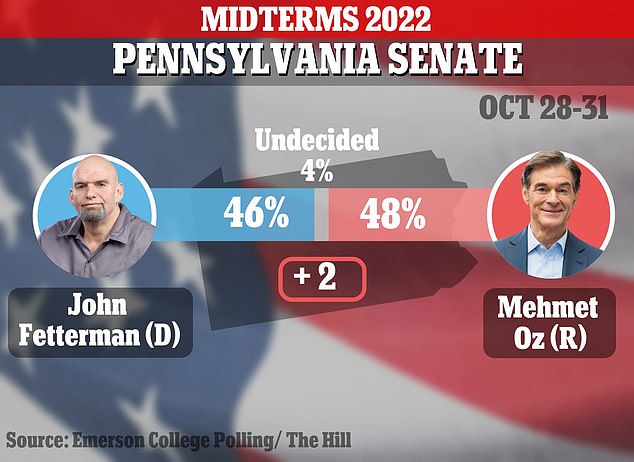 A new poll from The Hill/Emerson College shows Dr. Mehmet Oz pulled ahead of Democrat rival John Fetterman for the first time – with just five days until the 2022 midterms 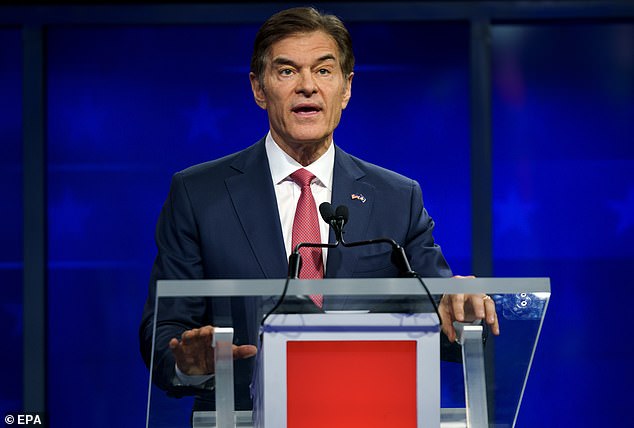 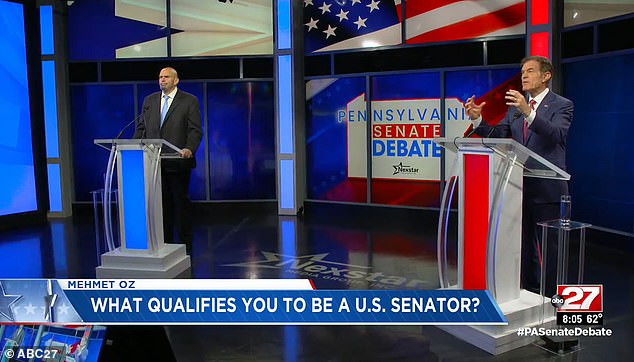 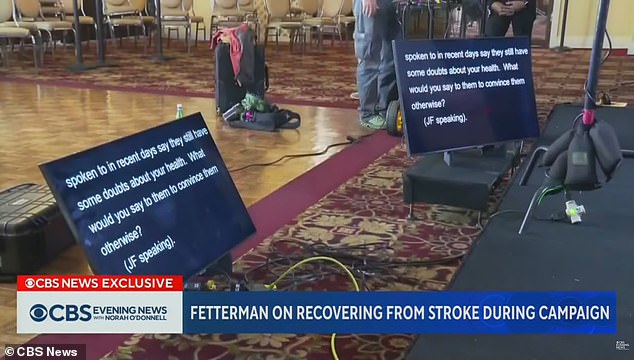 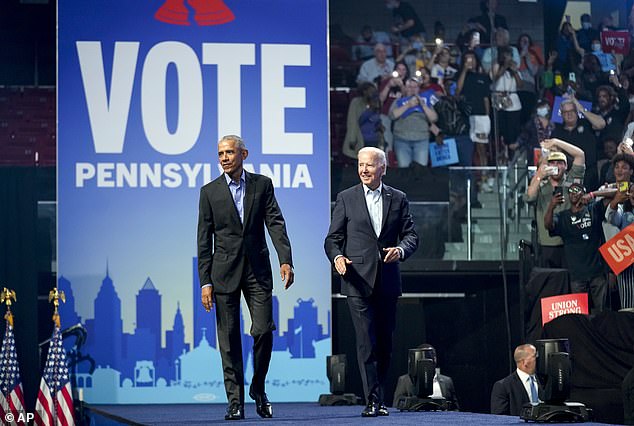 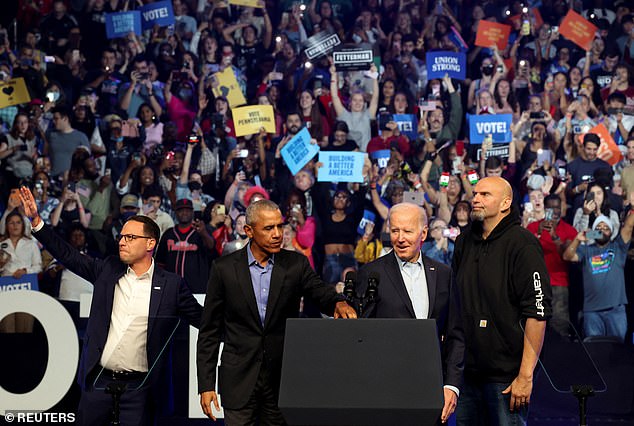 In advance of the debate, Fetterman’s campaign had tempered expectations, saying there would be ‘awkward pauses’ and ‘delays and errors,’ because the Democrat would be reading closed captioning due to his auditory processing issue.

When asked about small business owners who are concerned about raising the minimum wage, he said: ‘We all have to make sure that everyone that works is able to- that’s the most American bargain, that if you work full time you should be able to live in dignity is well true.

‘We can’t have businesses being subsidized by not paying individuals that just simply can’t evade to pay their own way,’ he said.

A day later, Fetterman delivered a smooth 13-minute stump speech in Pittsburgh as his campaign tried to downplay Tuesday’s performance, saying Fetterman has always been lousy at debates and that the closed-captioning system he used as an aid was faulty.