President Trump showed reporters a White House-produced video during Monday’s briefing in an attempt to shame the New York Times for critical coverage of his coronavirus response.

The video, which the president said was produced by Dan Scavino, the White House social media director, showed – in the White House’s words – that the ‘media minimized the risk from the start,’ but Trump took early action.

The White House team found audio of New York Times reporter Maggie Haberman saying that Trump’s China travel ban was ‘probably effective’ because it ‘did take a pretty aggressive measure against the spread of the virus.’

The video also featured a number of governors, including Democrats Gavin Newsom and Andrew Cuomo, praising the Trump administration’s leadership on the pandemic.

‘So the story in the New York Times is a total fake, it’s a fake newspaper and they write fake stories. And someday, hopefully in five years when I’m not here, those papers are all going out of business because nobody’s going to read them,’ Trump told the reporters in the room.

President Trump’s Monday press briefing turned into an episode of shame the press – as he lashed out against The New York Times, telling journalists he hopes the newspaper that has covered him critically goes out of business 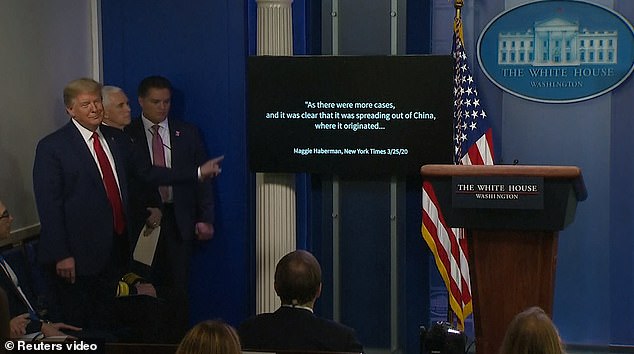 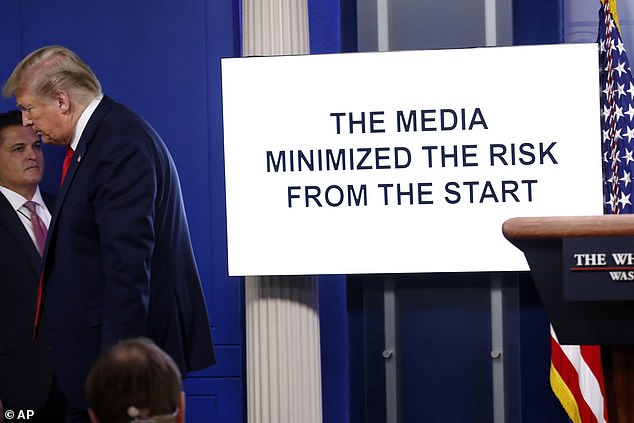 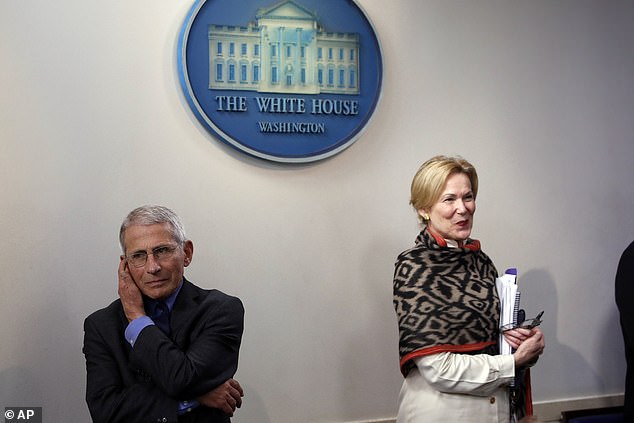 The story, authored by Haberman and five of her colleagues, detailed the ‘extent of his halting response’ to the threat.

ABC News’ Jonathan Karl admitted to the president that he’d never seen what looked to be a ‘campaign’ style video played in the White House briefing room.

The Hatch Act prohibits the president from actively campaigning at the White House.

Trump, during his Monday diatribe, brought up Joe Biden, the presumptive Democratic nominee, several times, claiming the former vice president had called the president to cut off travel from China ‘xenophobic.’ Biden, according to Politifact.com, never made that direct statement.

Karl asked Trump who produced the video for the president.

‘That was done by a group in the office and it was done by … we just put some clips together,’ Trump explained. ‘I could give you, I’ll bet you I have 100 more clips. They were just pieced together over the last two hours.’

Trump then identified Scavino and his team who put the broadcast together.

The president said he wanted to share this presentation amid the pandemic ‘because we’re getting fake news and I’d like to have it corrected.’

‘They’re saying what a great job we’re doing,’ he said of the governors’ praises. 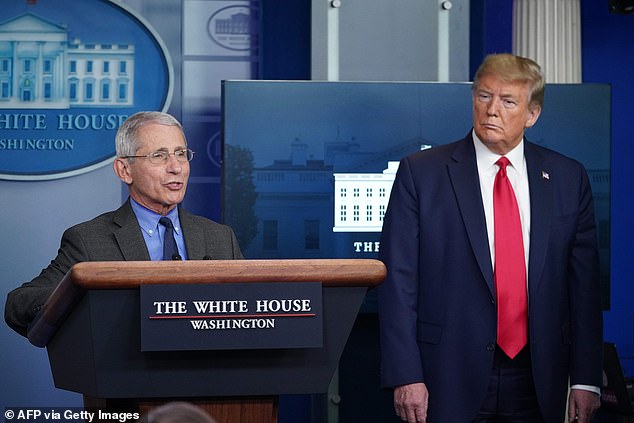 Before the video played, Dr. Anthony Fauci (left) took the podium to clarify some remarks he made that seemd to suggest that President Trump (right) acted too late – and could have saved more American lives

‘And the reason they did was to keep you honest,’ Trump added.

The video presentation was part two of what was already an odd briefing.

It began with Dr. Anthony Fauci coming to the podium to explain that he used a poor choice of words when he said that earlier mitigation would have saved lives.

He suggested at the briefing that he didn’t want it to look like he was assigning blame to Trump, who was standing several feet away from him when he made his remarks.

The White House already had to come out and say that Fauci’s job was not in jeopardy.

Trump had, however, retweeted a tweet that contained the hashtag ‘#FireFauci.’

When asked about that Monday, Trump answered, ‘That’s somebody’s opinion.’

The president denied that he ‘elevated’ that message with the retweet.