President Donald Trump made comments appearing to back away from his push for bringing an Easter end social distancing directions as the coronavirus proliferates and hospitals begin to be jammed with patients.

‘Then there are other sections that are very heavily affected, so there’s a big difference,’ Trump said.

‘I would say by Easter we’ll have a recommendation,’ he said – indicating he would be guided by health experts and other advisors.

‘I would say by Easter we’ll have a recommendation,’ President Trump said Wednesday, when asked about a timeline for reopening the economy amid lockdowns across the country

Trump’s push for an Easter reopening of the economy worried some public experts and the idea also drew alarm from some lawmakers in both parties, who fear it could cause the death toll to spike and would not spare the economy if the harshest periods of the coronavirus outbreak had not yet passed.

Although there are dramatic regional differences within the country, public officials worry that without a continued clamp-down, the disease will spread unabated bringing a deadly crush on hospitals. The coordinator of his coronavirus task force warned Tuesday that New Yorkers who leave the state should self-quarantine for 14 days so as not to spread the disease, amid prevalence there.

Trump also suggested those against a quick reopening might be trying to harm him politically, after being asked a question about experts ‘on both sides of the aisle have said that reopening the country by Easter is not a good idea.’

Trump continued to attack the CBS reporter who asked the question, saying: ‘I think it’s very clear that there are people in your profession that write fake news. You do.” 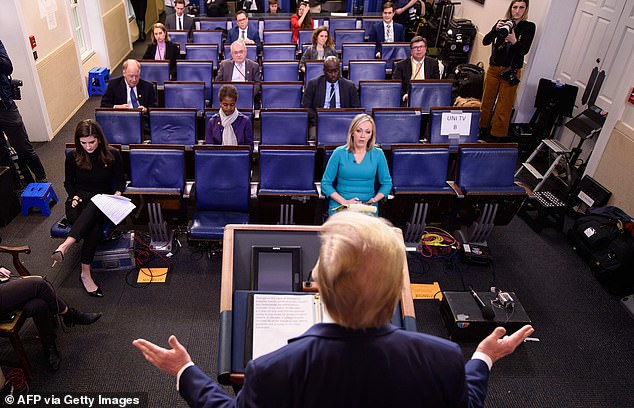 President Donald Trump speaks during the daily briefing on the novel coronavirus, COVID-19, in the Brady Briefing Room at the White House on March 25, 2020, in Washington, DC 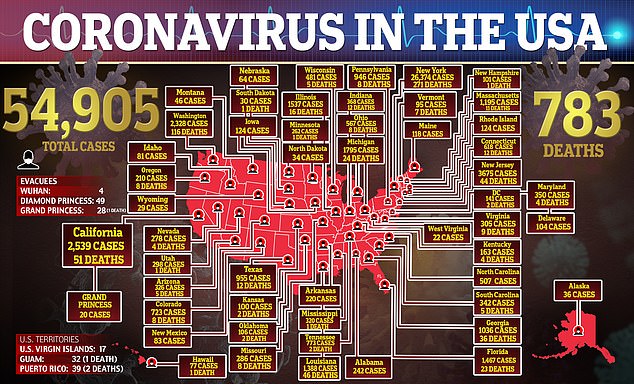 The death toll in the U.S. is nearing 800 as of Wednesday morning, with more than 1/3 of those coming from New York

Then he attacked her and claimed without his team there wouldn’t be a country. ‘You’re lucky that you have this group here right now for this problem, or you wouldn’t even have a country left,’ he said.

Trump described a scenario where parts of the company would be allowed to reopen, with people observing strict hand-washing and other prevention they learned from the outbreak.

‘They’re not going to go walk around hugging and kissing each other in the office when they come back, even though they may feel like it.’

His statements came as officials in hart-hit areas like New York and California were ratcheting up their own clampdown. Washington, D.C., the city from where Trump spoke, is closing non-essential businesses until late April, the city announced in an emergency alert.

‘I’m not going to do anything rash or hastily — I don’t do that. But the country wants to get back to work,’ Trump said, speaking on the second day when the markets rose after the senators reached agreement on a $2 trillion bailout.

On Tuesday, Trump repeatedly spoke about the goal of an Easter opening, which he indicated would have special significance.

‘I just thought it was a beautiful time,’ Trump said. ‘It was based on a certain level of weeks from the time we started.’

Fauci, a respected government expert in disease outbreaks, has called for weighing the evidence on a day-by-day basis not not committing to a timeline.